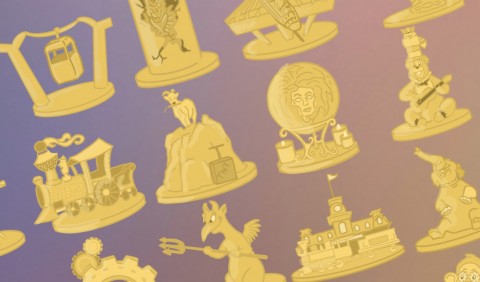 If we're being honest, it's pretty understandable that Disney World's "Golden Anniversary" is lacking some of shine fans had hoped for. Still mired in a tourism downturn caused by the Covid-19 pandemic, the timing just couldn't have been much worse for the resort to launch a global marketing campaign around the 50th Anniversary. Stalled construction and pared-down budgets have left Disney World woefully short on the major projects once envisioned for 2021, leaving specialty food and souvenirs, two nighttime "same"-taculars, rising prices, and a lot of new upcharges to make headlines instead...

No doubt hoping to get ahead of any unflattering press, Disney did launch a pretty adorable mini-initiative ahead of the Florida resort's 50th Anniversary: slowly unveiling – one-by-one – 50 Disney characters who would be immortalized as golden statues around the resort's four theme parks. Ranging from Mickey Mouse to Soul's Joe Gardner, the list is strong, and the statues themselves are beautifully-made, Instagrammable, and certainly tap into Disney's limitless and priceless catalog of characters.

But fans couldn't help but notice that – consistent with the largely nostalgia-free 50th Anniversary – just two of Disney World's 50 golden statues were devoted to characters made for the parks! (Those two – the Orange Bird and Figment – were replaced with movie characters in the otherwise-copied 50-character McDonald's Happy Meal toy release.) Disney movies are a wonderful thing, and yes, most guests probably come to Walt Disney World specifically expecting to see characters from Disney films...

To celebrate 50 years of Walt Disney World, though, should be to reflect on the rides and attractions that have shaped it! The experiences that generations of visitors have shared! The moments – funny, frightening, enchanting, and extraordinary – that are baked into the minds of visitors! I love Pua from Moana as much as the next guy, but what if rather than celebrating Disney's films, Disney World's fifty golden statues celebrated the history of the Resort? What rides would be worth immortalizing in gold? Let me start by saying – I'm no artist! But here are the 50 statues I imagined as Walt Disney World icons.

In real life, 25 of the 50 characters brought to life by golden statues reside at Magic Kingdom. It makes sense. After all, technically, Magic Kingdom is the only one of Walt Disney World's parks that's actually fifty years old. (The next oldest – EPCOT – will turn 40 in 2022.) Therefore, it's also the home base of the celebration, and probably the most fitting place to house golden statues of the "Elite Eight" (that's Mickey, Minnie, Donald, Goofy, Daisy, Pluto, Chip, and Dale), Tinker Bell, Pinocchio, and other classics.

If we were to reimagine the statues of monumental rides rather than characters, Magic Kingdom would still probably earn more than any other park. It wasn't easy, but narrowing it down, I arrived at 21 attractions of the past, present, and future that define the first fifty years of Magic Kingdom. Think you can name them? (If we've published an in-depth history of a given ride, we'll link to it in the list below.)

Get the picture? With just Magic Kingdom spoken for, nearly half of our 50 golden statues have been spoken for... so on the last page, we'll figure out how to memorialize the past, present, and future attractions of Walt Disney World's other three parks, and how these statues can tell the story of the resort's first half-century of growth and change... Read on!

People mover should be in

I'd keep the characters, but they don't need several of them. For example, Br'er Rabbit should've been kept instead of one of the newer characters, Iago could replace Abu, Frozone could've been Mr. or Mrs. Incredible, change out Timon or Pumbaa for Nala (adult) or Zazu and cub Simba for adult Simba, Jose and Panchito could've replaced Miguel and Dante, and Mickey & Minnie are already represented. It's high time another classic favorite got their due, like Horace, Clarabelle, Oswald or even Clara Cluck.