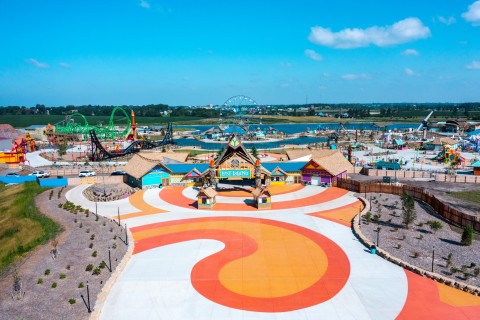 It not every day, year, or even decade that a legitimately new, independent, and master-planned theme park opens in the United States. It makes sense. In the eyes of many industry enthusiasts, the North American market is, for all intents and purposes, saturated with theme parks; they say that – like a sponge that can hold not one more drop of water – the industry is "mature"; that every metropolitan area that can support a theme park already has one, and that the future of the industry lies in the boundless markets of Asia and the Middle East.

But right here in this country, a new park has risen to challenge that. Look – Lost Island Theme Park in Waterloo, Iowa isn't exactly in a bustling metropolis. It's also far from the tourist centers of New York, Orlando, and Los Angeles. And to be fully transparent, this new-for-2022 park is also not quite complete. With a few (major) rides' openings postponed, attendance lower than owners had hoped, and more freshly-set soil than full-grown trees, it's clear that Lost Island has some settling and growing to do.

But let's be clear: no true fan of themed entertainment or amusement parks would point at Lost Island's shortcomings and laugh. Rather, this is a park every single one of us should be rooting for. Unimaginably, Lost Island has dared to transform the vast soybean fields of Iowa into the makings of something more interesting, ambitious, and original than Disney or Universal would attempt at their respective scales. Lost Island is an underdog the likes of which we should admire and support; a surprising hidden gem of the industry; and a clever example of just how far a little storytelling can go...

To understand how we got here, you have to know that for Iowans, "Lost Island" has been a getaway since long before the idea of a theme park in Waterloo was born. Inspired by a visit to the Wisconsin Dells (the infamous "Waterpark Capital of the World"), the local Bertch family decided to add a unique side business to their existing cabinetry company: a waterpark.

Okay, okay, when you hear "Iowa," waterslides and roller coasters may not be the first thing that come to mind. (Rather, you probably picture corn, wheat fields, and the expansive flatness of America's heartland.) But think about it: waterparks have a relatively low start-up cost, relatively stable staffing models thanks to their short summer season, and relatively straightforward paths to profitability. Unlike amusement parks, waterparks generally don't need continuous annual expansion or $20 million capital coaster investments. Instead, they can quickly settle into local economies and communities, supported by reliable season pass sales.

Opened in 2001 (coincidentally, just before the post-9/11 "staycation" would become industry standard), the Bertch's Lost Island Waterpark was arguably of a pretty sensational scale and caliber. Obviously there was the sizable slide collection, meeting and exceeding the scales of many Cedar Fair and Six Flags waterparks.

But baked into Lost Island was also an ambition unusual for the genre and era... Designed by the BDR Design Group of Cincinnati, Ohio, the Bertch's waterpark bothered to invest in a theme long before it was industry standard. From scenic concrete rockwork to thatch roofed structures; vibrant South Seas colors to Polynesian-inspired ride names that neither SeaWorld's Aquatia nor Universal's Volcano Bay would emulate until decades later, Lost Island was an escape from the ordinary, even in its 67,000 person town.

Actually, Lost Island Waterpark has spent two decades garnering a reputation as one of the nation's best waterparks; a Travel Channel-caliber experience and a regional landmark reportedly drawing several thousand customers a day without breaking a sweat. So you can imagine that the Bertch family began to imagine what could be next...

According to an interview with In Park Magazine, possibilities floated for expanding Lost Island included an indoor waterpark, a high ropes course, or a family entertainment center – all practical next steps for a successful waterpark venture. But with their design partners at Cincinnati's BDR, a bold idea came into focus: what if Lost Island's transformation into a multi-day, regional destination came in the form of an entire theme park?

In 2019, ground was broken on Lost Island Theme Park... But you have to understand that in this case, the Bertches and BDR really meant it: a theme park.

That makes sense. Think about how the amusement industry has changed over even the last few decades! From escape rooms to pop-up art exhibits; "experiential museums" to Meow Wolf... We've entered an age of entertainment shaped by the generation who grew up on Legends of the Hidden Temple, and an era of designers inspired by the Wizarding World of Harry Potter. "Rides" have been supplanted by "experiences" as young people flock to themed dining; immersive entertainment; hyper-real fantasy experiences that can beat YouTube POVs.

It's really no surprise that one of the first truly from-scratch theme parks of the 21st century would lean into the idea, providing guests not just a midway with rides, but a world to explore. And that's exactly what Lost Island was designed to do.

This new park in Iowa wasn't just created with blueprints and schematics, but with a mythology; a literal world of characters and architecture and terms that together create a lost, mythical world of elemental realms, all set down in the midst of soybean fields. A perfect fusion of a regional amusement park and a LARP-friendly experience like Utah's Evermore or a fantasy-infused Renaissance Faire, Lost Island invites you into fantastical, colorful, clever realms you'd never expect.

Reportedly at a cost topping $100 million (and enduring countless delays due to an unfortunate pandemic-era construction), Lost Island opened June 2022. We won't tell you that this new park is worth abandoning your plans to visit a destination resort... But frankly, as the Oz at the end of a midwestern coaster road trip? Or a long weekend flight? Lost Island will leave you enchanted, intrigued, and rooting for this park that took big risks in punching above its weight..

Lost Island is divided into five "realms," each imbued with a mythology, story, characters, and symbology all its own. Four of the park's realms represent elements – Yuta (earth), Udara (air), Awa (water), and Mura (fire). The fifth realm – Tamariki (spirit) – represents the playful, pervasive force that holds them in balance. As for what awaits in each? If anything, our little tour of Lost Island will doubtlessly leave you stunned at how colorful, customized, and thoughtful this little park is... Ready to set of?

It all begins in Ara Matua – the park's entry gates. Obviously, this park is fresh. Like, seriously fresh. You probably won't have seen such vibrant colors anywhere else on Earth; an absolutely beautifully saturated, tropical portal into adventure. Lost Island "guides" will also welcome you to the island, and encourage you to download the park's official app. (It's worth trying even if you aren't visiting... The app allows you to create a character inhabiting one of Lost Island's five elemental "realms," exploring the story behind the experience. In-park guests unlock further mythology and badges.)

In short, Lost Island's five realms were threatened with utter destruction when, centuries ago, the molten demon Volkanu was formed from the fires of the island's peak. Volkanu's destruction tore through the floating air kingdom of Udara, the nomadic seaside villages of the Awa, the sacred earth ruins of the Yuta tribe, and the temples of the fiery Mura clan. Only by uniting together and with the island's spirit guardians – the Tamariki – did their civilization create the legendary golden idol, the Ora-Tika, trapping Volkanu deep beneath the fire temple.

Today, the five realms – Udara, Awa, Yuta, Mura, and Tamariki live in harmony as they rebuild from the devestation of Volkanu... and seek to keep the fire demon trapped in the earth's core. In fact, as you enter Lost Island, you may even notice that the totem poles at its gates represent those realms – on the left, the ancient stone and serpants of Yuta and the fiery fury of Mura; on the right, the low-key island life of Awa, and the aerial inventors of Udara.

Quite literally everything at Lost Island in new, including its plantings. Unlike Disney and Universal, who can truck in full-grown trees, Lost Island is starting from scratch. So sure, on a blazing hot day, you'll be seeing refuge in the park's restaurants, dark ride (which we'll get to), and the Awa realm of water attractions.

But half the fun is seeing something so ambitious – the rockwork, the colors, the patterns, the mythology, the thatched roofs, the lagoons and waterfalls – so pristine and new untouched. Each realm has its own flavor; its own architecture; even its own lighting! (The central Ara Matua has light-up pineapples, above.)

There's so much to discover in this incredibly creative must-visit of a park. So if you're ready, step through the gates of Ara Matua and we'll take a tour of the sights and sounds of Lost Island... Ready?