Having passed through the gates of Ara Matua, we can at last gaze across the water at the five realms of Lost Island: Tamariki, Udara, Awa, Yuta, and Mura. Lost Island is relatively small compared to many destination parks, so it really is almost like a park with attractions; one that you can easily stroll from side to side, crossing bridges over an inland lagoon whose waterfalls feel a much larger bay beyond. Even in its small space, there's a whole lot to explore...

A trip around Lost Island begins in the playful realm of the Tamariki – the guardian spirits who serve to unite and safeguard the four elemental tribes. The Tamariki – curious creatures with unseen faces, glowing eyes, raccoon-like tails, and curved goat horns – aren't just the core of the park's mythology. They also serve as its mascot. Walkaround Tamariki meet-and-greet throughout the realms, and of course, plush Tamariki are the must-have souvenir of this ambitious park's storytelling. (You can also purchase Tamariki horns – a sort of Mouse Ear equivalent.)

As the playful, mischievious, and spirited civilization of Lost Island, it's not surprising that the Tamariki realm serves as the park's kids area. The land is essentially a bright, kinetic plaza of incredibly-decorated family flat rides, all built around the TAMIKOA GROTTO playground (above). Throughout the land, curved flowers serve as lampposts and swirling pastel patterns cover the ground.

Narratively, there's something really sweet about the Tamariki in general. But even more clever, since the Tamariki hold the rest of the Island's realms in balance, you'll find nods to each in wonderfully customized designs... And while you've probably seen many of the ride models in Tamariki elsewhere, what's absolutely jaw-dropping about Lost Island is how incredibly customized each ride has been to fit the style and lore of the park.

From the realm of water comes TUKA TUMBLER - a mini Ferris wheel made of tortoise (or in the Tamariki language, "tukas") shells, and MAMA PEZAKI - a wonderfully customized "swinging bus" ride placing guests in a giant fish.

From the world of air comes KAPULELE GLIDERS (with riders suspended beneath butterflies, pedaling to power spinning fans on the back of their seats), while the land of earth contributes GOLAPA SPROUTS (with rising wicker baskets that swirl like fallen seeds). The land also contains the MURA FIRE DANCER - a family drop tower decked out in stylized tiki torches, representing a kid-sized version of the thrill rides that await in Mura.

It makes sense for Tamariki to be the last guests first encounter when traveling counterclockwise around the park, as it serves as a stylistic prologue for the worlds to follow. But the path continues around the park into a very different land...

In Lost Island's mythology, Udara, was the air kingdom; a realm of levitating cities built among the clouds. A race of erudite inventors and tinkerers, the Udarans are knowledge-seekers, always on a quest to harness the power of the wind. Of course, when Volkanu's destruction saw their magnificent floating cities crashed back to Earth, the Udarans set out to invent new technologies that would lead them skyward once more...

Even in the park's infancy, this land is a beautiful example of how far simple placemaking can go in telling a story and communicating something spatially. The realm of Udara is united in stark whites and purples, its rides all grafted with matching gears and levers as if designed by Lost Island's airy kingdom of inventors. Grasses blow in the wind and purple pinwheels spin as unusual white rocks jut from the ground, as if clouds have been made geologic.

Each of Lost Island's realms is built around a central gathering place for its people. In Udara, it's the AVIARIUM, a living playground of wind. Here, guests can pedal to turn propellors; use paddles to activate wind instruments; twist gears and wheels to send turbines spinning.

There are rolling white mounds with grass atop, perfect for reclining and looking skyward – as if this land was meant to keep Udarans focused on their return to the clouds. This is a musical, kinetic land with an airy soundtrack. It's lightweight and soft. And more to the point, it's got a number of rides designed as the Udarans experiments in flight. 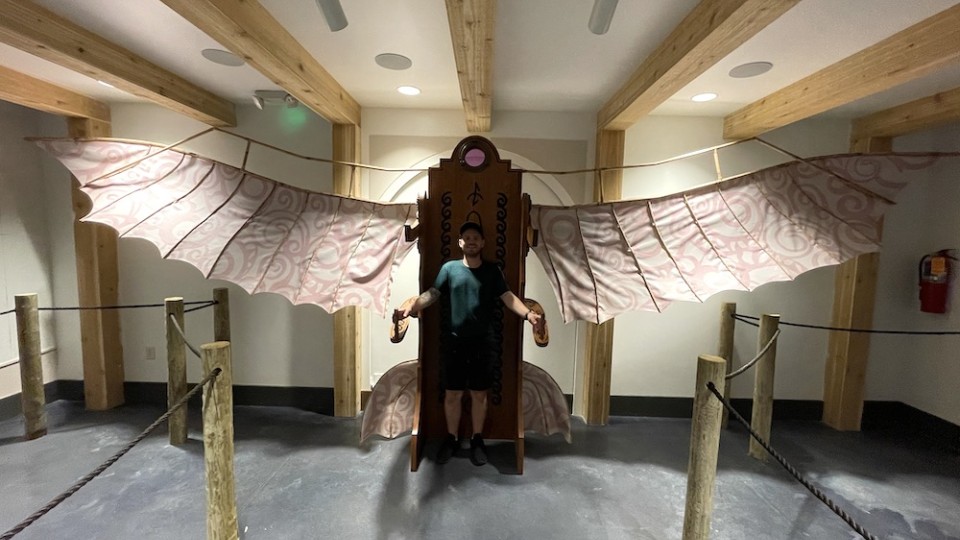 The most obvious is SKYBORNE – the park's S&S drop tower. Far exceeding what you might expect for an "off-the-shelf" attraction, the queue for Skyborne actually passes through the Udarans' labs, allowing you to get up close to their inventions and flight technologies. (See me, above, trying out an Udaran glider in the queue!) Passing blueprints on the walls, guests actually can learn the story of the Udaran kingdom and how Volkanu's attack send them plummeting back down to Earth.

Walking through the line, you'll see continued redevelopments of new aerial ideas, culminating in one that will no doubt look familiar (left). Yes, the Udaran's most recent prototype is the ride you're about to climb onto.

Guests actually enter a full, playful pre-show beneath a sky dome before loading onto the tower itself. It's just one example of how a little story can go a long way... and why, if you're the kind of person who appreciates that over a standard S&S tower in an amusement park, Lost Island should be on your bucket list...

Udara also contains what must be one of the park's unexpected signature attractions – a unique flat ride called AMARA AVIATORS. It's one of just two rides of this type in operation in the country. Basically, guests climb aboard their own suspended seat, complete with two wings that can be tipped foward and backward independently. As the ride begins, riders seats are unlocked, able to rotate freely.

As a mechanical arm spins the collection of 12 riders in sweeping circles, guests can manipulate their wings to fly steadily, rock back and forth, or even flip. Whether you're flapping, rocking, tumbling, or even inverting, it's incredibly graceful and joyful. More to the point, though, it's about experimentation. You'll hear riders shouting back and forth about what works, and how to flip, and laughing and shouting, then racing to go again. This is a sensational ride, perfect for the park, and absolutely iconic for how it matches the spirit of the air kingdom.

For a tamer version, you might instead opt for the classic DREAM SPINNER – a yoyo swing beautifully decked out in the Asian-inspired art style of Udara, with swirling clouds, airy patterns, and mirrors that reflect the sky.

But of course, the land's anchor attraction must be NOPUKO: AIR COASTER. For roller coaster aficianados, it'll look familiar considering its one of dozens of identical Vekoma SLCs (that's Suspended Looping Coasters) that can be found across the country. Actually, Nopuko is one of just two adult roller coasters at the park, and like the other, it's "used." (The ride originally operated at the now-closed Ratanga Junction in South Africa. The park's other major coaster was similarly purchased, transported, and re-installed at the park after having a "first life" elsewhere.)

Vekoma SLCs certainly aren't enough to get coaster enthusiasts to book a road trip, and as far as SLCs go, Nopuko is par for the course... that is, the nickname "hang and bang" sticks.

However, it should definitely be noted that Lost Island did also purchase new Vekoma trains with vest restraints rather than the harder, thicker over-the-shoulder restraints that cause the head-banging so many inverted coasters suffer from. So yeah, okay, Nopuko is an anchor attraction, but probably not enough to get you hyped. But hopefully you can already see that a day at Lost Island isn't just about rides, and certainly not just about coasters. But there's a whole lot more to see...

With two of Lost Island's five realms revealed, you probably already have found something you'd be excited to see. And hopefully, you've also found yourself surprised by the ambition built into this little regional park in Iowa. On the last page, we'll explore the park's signature coaster and a truly world-class dark ride you won't find anywhere else... Read on...!