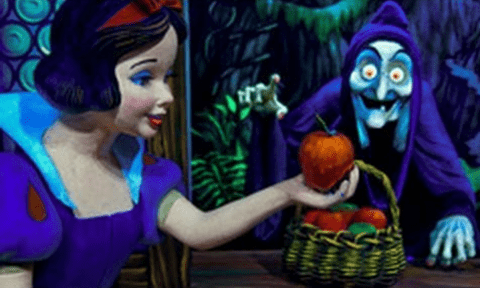 Locked into a chair and cornered by a growling, drooling, bloodthirsty alien… Braving the otherworldly unknown hidden within the historically haunted Hollywood Tower Hotel… Racing through the cataclysmic darkness of the final minutes of the Cretaceous with a hellish Carnotaur giving chase… Navigating the misty graveyard path into the flickering parlor of the Haunted Mansion…

Long before these frightful experiences were part of a Disney Parks visit, guests were startled, spooked, and downright scared by a Fantasyland favorite that tricked its riders into expecting princesses and happy endings. For generations of visitors who grew up with this scary adventure, it was a test of bravery to come out the other side with eyes open.

Here at Theme Park Tourist, we’re working to assemble a library of Lost Legends – in-depth entries that tell the full, unabridged stories behind forgotten favorites and closed classics. We’ve told the complete behind-the-scenes tales of everything from Maelstrom, Soarin’, and California’s Twilight Zone Tower of Terror, to The Peoplemover, Horizons, the original Star Tours, and so many more! Across the site, watch for links to Lost Legends entries. 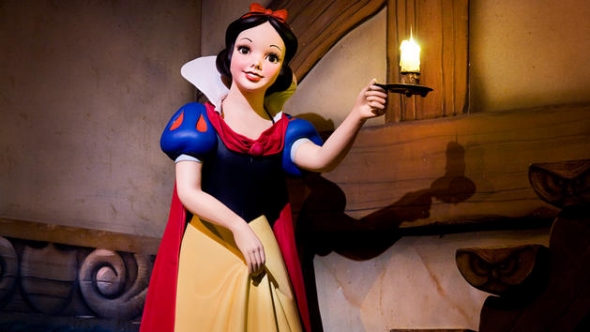 But today, we focus on a ride scary enough to have left an impression on kids of all ages, concealed by its placement among Peter Pan’s Flight and The Many Adventures of Winnie the Pooh in Magic Kingdom’s quaint Fantasyland. It can only be the full story behind Snow White’s Scary Adventures at Walt Disney World. In this in-depth look back, we’ll dissect the ride’s history and what it was like to see it up close. Then, we’ll explore its demise and consider how a boy wizard might’ve spelled the end for the Wicked Witch. Ready to ride?

A History in the Dark

Believe it or not, dark rides have been around for more than a century. In the late 1800s, simple dark rides cast as “Old Mills" or “River Caves” invited guests to sail through darkened scenes, (sometimes lit by the brand new electric lightbulb!), canoodling in the dark. Before long, these historic dark rides gained a familiar name – "Tunnels of Love" – as they presented the perfect opportunity for a secret kiss in the years when public displays of affection as innocent as hand-holding were forbidden.

(Today, for example, the oldest surviving dark ride in the world is at Kennywood in Pittsburgh, Pennsylvania… Originally an Old Mill dating to 1901 – that’s 116 years ago – an unfortunate Garfield overlay is currently in place, making the ride seemed quite a bit less esteemed than it ought to be.)

As the years pressed on, the settings and scares of these dark rides became more elaborate, resulting in spook houses, ghost trains, Noah’s Arks, mine rides, and laff-in-the-dark funhouses. Increasingly, props, sounds, theatrical lightning, scenery, and surprises made dark rides a staple of amusement parks across the globe. Some were even ambitious enough to tell stories. 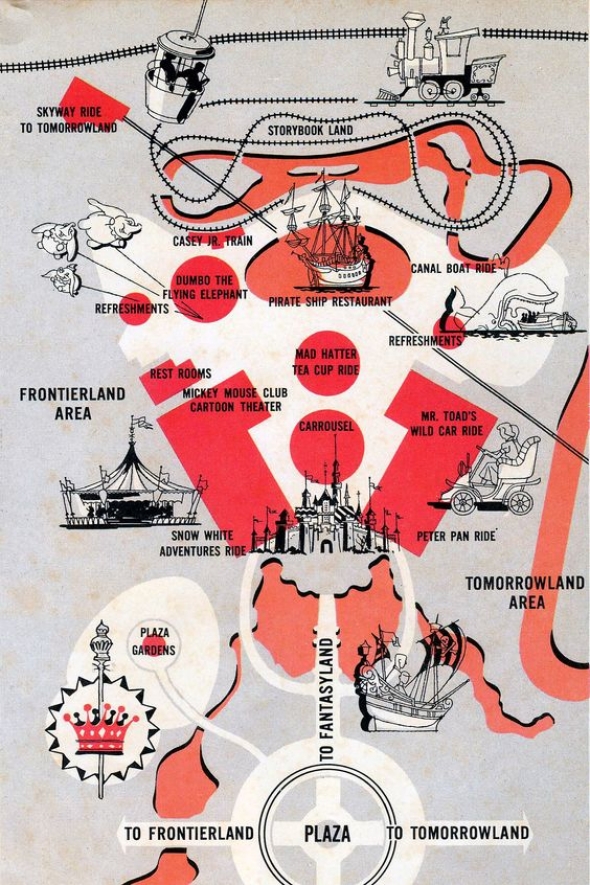 It’s thought by his friends and early Imagineers that Fantasyland was Walt’s favorite of the Disneyland’s themed lands. He once asked, "What youngster has not dreamed of flying with Peter Pan over moonlit London, or tumbling into Alice's nonsensical Wonderland? In Fantasyland, these classic stories of everyone's youth have become realities for youngsters – of all ages – to participate in."

Dark rides would be the perfect medium in which to tell the stories of Disney’s greatest animated films, so they were given a prominent position in mirrored showbuildings branching from Sleeping Beauty Castle, creating an inner courtyard to the land. Upon Disneyland's opening in 1955, the three dark rides of Fantasyland proved to be some of the park's starring features.

California: Snow White and Her Adventures (1955)

While Walt Disney and his designers were far from the first to tell a story through the unique medium, their installations at Disneyland from its 1955 opening were something of a rebirth, setting a new precedent for the style and substance of future dark rides. 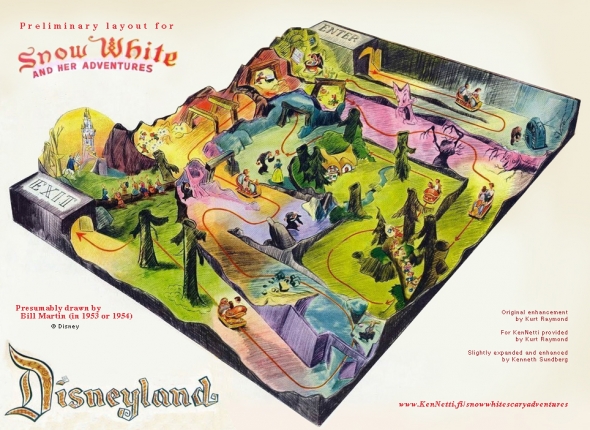 As Walt had promised, guests could soar over London and tour Neverland aboard Peter Pan’s Flight, race through the British countryside en route to “nowhere in particular” on Mr. Toad’s Wild Ride, and recreate the unforgettable journey of the world’s first ever full-length animated film on Snow White and Her Adventures. (Guests would be able to "tumble into Alice's nonsensical Wonderland" three years later, when Alice in Wonderland opened in 1958.) Each was concealed within the two showbuildings, decorated by pastel, medieval tournament-tent style facades.

One particularly strange thing about these early Disneyland dark rides was that, in each, we, the guests, were meant to take on the role of the protagonist. We became Peter Pan, Mr. Toad, or Snow White, experiencing things from his or her point of view. The end result is that none of those three characters were physically present within the ride, leading to some understandable confusion: why, for example, do we not see Snow White even once on the ride named for her? 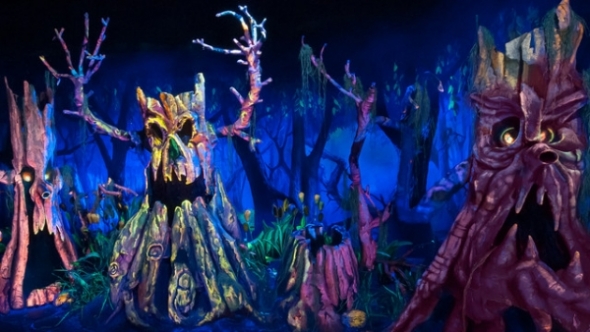 That’s probably why Snow White and Her Adventures quickly gained a reputation for being a little spooky. After all, a Snow White ride without Snow White left only dark forests, a vengeful queen seeking her (or is that, your?) heart, poison apples prepared in grimy dungeons, and spooked woodland creatures.

Of course, these early Fantasyland dark rides would look rudimentary by today's standards, mostly comprised of painted panels, static mannequins, and simple props lit by the unforgettable glow of ultraviolet paint humming under blacklight. In other words, Snow White and Her Adventures was a simple and modest evolution of the kinds of dark rides being produced elsewhere, with the inclusion of Disney and his Imagineers giving it something special.

Still, the idea of a dark ride based on Snow White and the Seven Dwarfs deserved to be renowned. So when designers began to develop ideas for the “Florida Project” and its Magic Kingdom park, the inclusion of a Snow White ride was assured. But designers were also determined that this new Disney World would supersize its contents, “plussing” the shared elements of Disneyland.

Magic Kingdom opened in 1971 with the same tournament tent style Fantasyland that Disneyland had featured for 16 years. And just like its older sister, one of those medieval exteriors housed a dark ride based on Snow White and the Seven Dwarfs. Here called Snow White’s Adventures, you might be fooled. But know this: despite the fact that “Scary” had yet to make its way into the ride’s name, Snow White’s Adventures was scary – very scary. 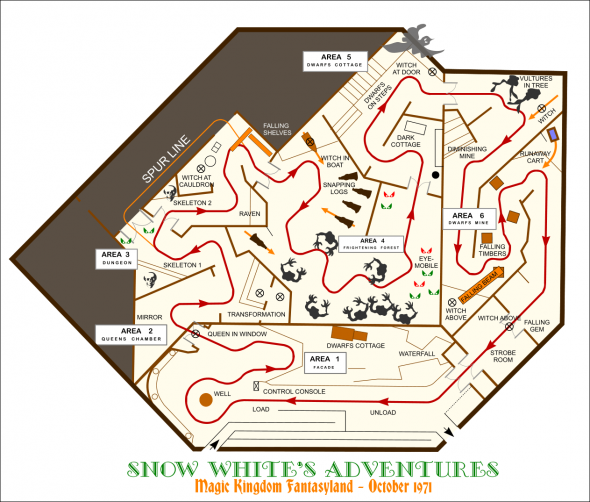 In designers’ quest to make Snow White’s ride into the deliberately frightening ride of Fantasyland’s lineup, they’d taken a cue from classic spook houses… Loud noises, "jump scares," sudden crashing sounds, unexpected flashes, and glowing figures coming within inches of the ride vehicle made this “fantasy” ride far and away scarier than the Haunted Mansion, and perhaps more sinister than any ride that Disney's ever aimed at children. “Happy haunts” need not apply, as this old-fashioned haunted house style ride was fast, loud, dark, and scary.

Snow White’s Adventures was genuinely unsettling – floating eyes in dark forests with demonic trees scratching, crashing shelves, and distant screams in forgotten dungeons…. Even a moment of would-be reprieve – the approach of the Dwarfs’ cottage – turns to misery as the fixtures and furniture inside look darkly alive with terrified, quivering eyes. Our glimpse of the woodland animals gathered outside the window shows them staring right through us, petrified, at a dark corner just ahead. Most unsettlingly, there is no score – no music whatsoever – on this ride... Simply the echoing screams and evil laughter from other rooms echoing endlessly down hallways. 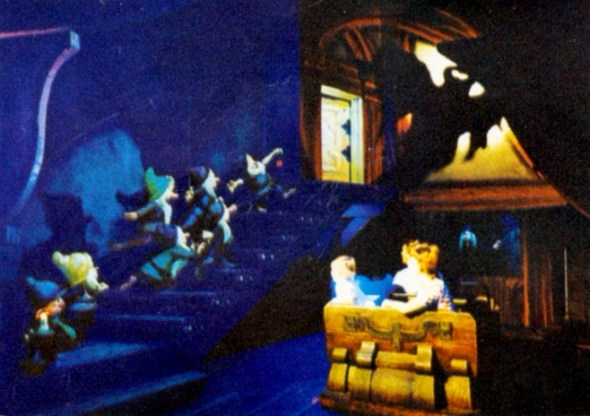 Snow White is no where to be seen on this ride, and here in their cottage we get our first and only view of the Dwarfs, racing up the stairs in terror as a shadowy figure passes overhead. Two menacing vultures lurk in the swamp outside as the horrifying and crudely carved Witch races toward us, her screaming mad laughter paralyzing.

She’s in the Dwarfs’ mine, too, pushing over the supports above us to cause a cave in and she grimaces, “Enjoying your ride?” When you enter the mine’s gem-filled caverns, it might seem that this colorful finale will alleviate some of the tension. But no, the Witch is here again, pushing a gigantic gem from a lofty cavern and down onto up. "Goodbye, dearie!" And with a flash of light... we're dead.

Legitimately petrifying and "scary" in a way that no other Disney attraction attempted, Snow White's Adventures was an unimaginably unique ride. No analysis or "ride-through" we create could be as useful, compelling, or complete as the vividly in-depth write-up created by noted Disney historian and design guru Foxxfur and the Passport to Dreams Old & New blog which we highly recommend.

You may also want to watch this frantic on-ride video of the terrifying original version of the ride:

While you might think that this depraved and dark version of the tale couldn't have lasted long, the sinister spook house retelling of Snow White was a prominent piece of Magic Kingdom's lineup for more than 20 years. From its opening in 1971 to a refurbishment in 1994, the Wicked Witch terrorized a generation. Yet this horrific ride is not our subject today.

Because in 1994 – spurred by a test across the Atlantic Ocean – Disney redesigned Magic Kingdom's Snow White ride from the ground up. And that is the version of the dark ride that many children of the late ‘80s and ‘90s are likely to remember… That ride is also a Lost Legend. Read on…

I'm a big fan of the original Snow White's Adventures as it scared the pants off me back in the early '80's and started a life long love of very scary dark rides. I'm sure I'm not alone in this!

I would also like to note that Disney never throws anything away. I've done the runDisney Tower Of Terror 10 miler and they have featured the Wicked Witch figure that dips the apple from the ride along the course as well as a submarine from 20,000 Leagues Under the Sea. These kind of Easter Eggs are what make me always go back to Disney for more.

Another GREAT article Brian! I really didn't expect to learn so much more new information in addition to the previous article written about this attraction or for this one to tie in Islands of Adventure as well as the most touching story about the closing of this attraction. Seriously read the link one of the most touching Disney stories and yet another reason why I will continue to support the company.

Great report - really interesting. I'm shocking to hear, if I've read it correctly, that the huge space that made up the original Snow White ride is only housing 2 princess meet and greets?! Does this mean there's a whole lot of space being wasted??

You should have talked about how Universal Studios has a Marvel land and how that probably angers Disney to no end.