Once upon a very long time ago, each and every park at Walt Disney World had its own theme; a concise identity, and a clear vision of what exactly it was about. Magic Kingdom made fantasy real; EPCOT made reality fantastic; Disney’s Hollywood Studios was a malleable showcase of the stories that connect us; Animal Kingdom, an embodiment of the supreme and untradable value of nature and humanity’s story as part of it.

Fans (probably fairly) criticize the 21st-century homogenization of Disney Parks, where a “Zootopia” land feels as likely to come to Hollywood Studios as it does to join Animal Kingdom; where Marvel heroes and Pixar pals are randomly sprinkled between EPCOT and Magic Kingdom; where Frozen ends up in World Showcase instead of Fantasyland, and where Mickey Mouse makes the Chinese Theater home, and where Monsters Inc. moves into Tomorrowland.

You only need to rewind to before the 2020 pandemic to see how “nighttime spectaculars” could serve the parks they’re presented within. The most recent generation of Disney’s biggest, loudest, and most impressive after-dark shows weren’t perfect, per se, but they did exactly what any fan could hope for: they served as epilogues to a day at the park, closing the chapter with one, final, definitive statement on what the day summed up to; what the park was about, and what message guests were meant to leave with.

Magic Kingdom – Happily Ever After 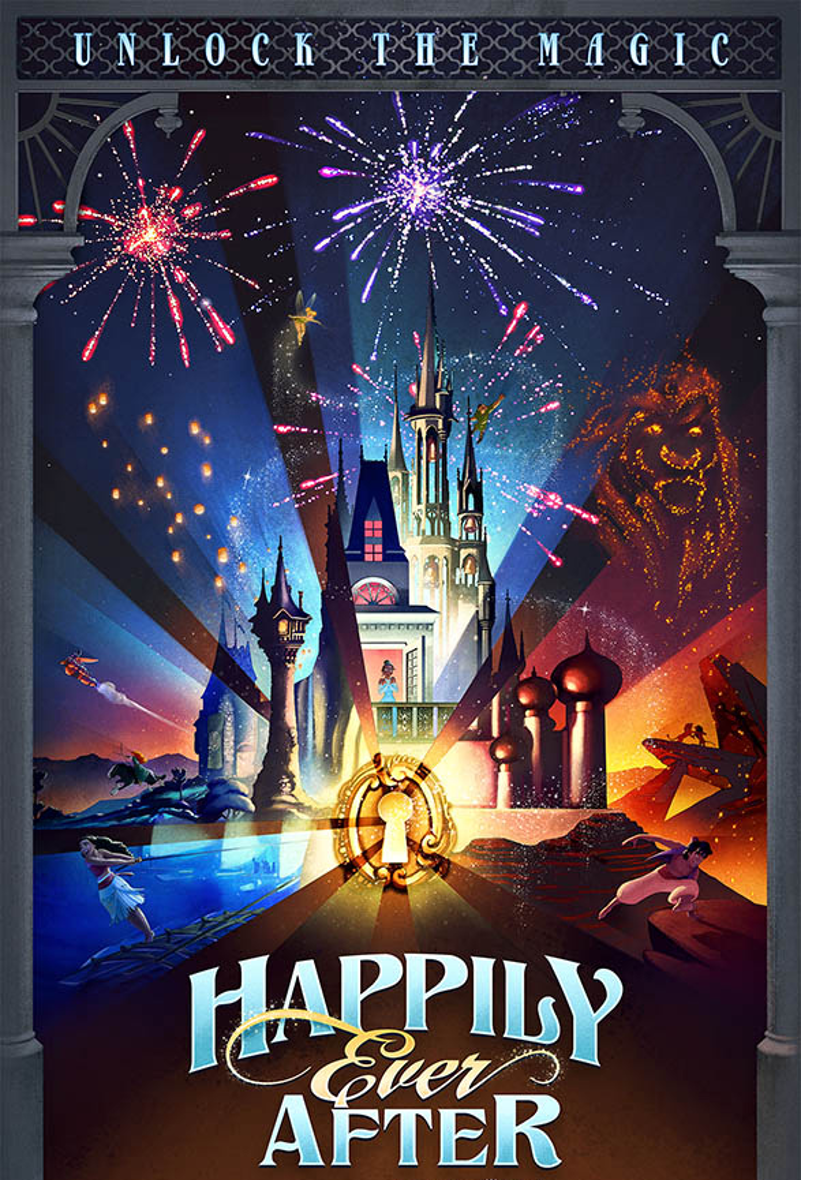 At Magic Kingdom, Happily Ever After spoke for itself, literally. “It’s just the beginning! Feel your heart beat faster! Reach out and find your happily ever after!” Filled with Disney’s classic (and okay, empty) platitudes about dreams and the magic within and taking chances and going on journeys, Happily Ever After did two things really, really well.

First, it did projection mapping right. Too often, Disney uses projection mapping to basically cover park icons in abstract colors and designs or, worse, use them as very bumpy movie screens. Happily Ever After did exactly what we love – it used the castle. Waterfalls poured down its towers; vines climbed across its turrets; sails from Moana’s boats followed the peaks and pinnacles; it became a castle toy set as Toy Story characters arrived; an Imperial Palace with snowy peaks beyond as Mulan joined. Not just color and light, the castle became a set continuously transformed.

Second, Happily Ever After had a flow. Sure, at the end of the day, it was merely a “clip show;” a jukebox musical of Disney songs. But internally, the show was organized into smaller acts, each loosely themed to the “ingredients” of a hero’s story: Dreams, Journey, Friendship, Love, Adversity, and Triumph. That throughline didn’t have to be spelled out; it could be felt. It provided a loose organization to the show; not a story, but a message… and one totally fitting Magic Kingdom’s popular image of magic, happiness, adventure, and “happily ever after.”

It’s unlikely that Disney Parks will ever again orchestrate anything quite as original, ambitious, and eccentric as Illuminations: Reflections of Earth. Debuting in 1999 (EPCOT was the heart of Disney’s Millennium Celebration, remember), the show was actually an evolution of 1988’s original IllumiNations, which was itself a redress of 1984’s Laserphonic Fantasy. But for the New Millennium, EPCOT went big.

Centered on a 28-foot tall LED globe floated into the middle of World Showcase Lagoon each evening, Illuminations: Reflections of Earth promised something ambitious: “We're gathered here tonight around the fire as people of all lands have gathered for thousands and thousands of years before us... to share the light... and to share a story. An amazing story as old as time itself, but still being written. And though each of us has our own individual stories to tell, a true adventure emerges when we bring them all together as one.”

Divided into three acts – CHAOS, ORDER, and MEANING – Reflections of Earth quite literally told the story of humanity. From the roiling, violent formation of planet Earth (ending Act I with the globe floating in a sea of stars) to the origins of life, the emergence of cultures (featuring World Showcase pavilions illuminating), and our shared celebrations, the show led up to “We Go On.” During the closing act, each pavilion’s torch would illuminate, leading the central globe to crack open, revealing a single flame of unity inside.

Think of Happily Ever After and Illuminations: Reflections of Earth as what they were: the bookends to a day at Magic Kingdom or EPCOT – two parks with very different identities and very different “lessons” to teach! There’s a beauty to that “kiss goodnight;” the last – and arguably, strongest – touchpoint with guests, where you can state, plain and simple, what this whole day has been about.

At Magic Kingdom, the lesson is that the path from “Dream” to “Triumph” is a long one, and that “Happily Ever After” comes to those who work for it. Sure, we know that Magic Kingdom is so much more than Disney World’s “fairytale” park, but in terms of a centering message to be projected on Cinderella Castle, there are few stronger than Happily Ever After’s.

That’s true at EPCOT, too, where Illuminations: Reflections of Earth was quite literally performance art; a big, heady, intellectual journey through 4.5 billion years of Earth’s history and 11,000 years of human civilization, somehow tying in both the countries of World Showcase and the promises made in Future World, all pivoting around the New Millennium.

To be sure, the same can be said of Fantasmic! – an imaginative exploration into the worlds of Disney animation perfect for Hollywood Studios – and even Rivers of Light – an Illuminations-flavored celebration of nature and humanity’s evolution alongside and within it, simply hampered by being unable to feature the “spectacular” part of nighttime spectaculars. (See also, the definitive Fantasmic at Disneyland and the sensational World of Color at Disney California Adventure as day-ending odes to imagination and optimism, respectively, each filled with flow and emotion.)

Four parks, four identities, and four very different bookends to match. But as anyone who’s been following Walt Disney World’s 50th Anniversary will tell you, that just changed… Read on...

Thanks for the review of these new shows.

After reading a lot of articles, it seems like Walt Disney World (and maybe the Disney parks in general) are now being defined as "good enough". While that might be a good attitude for second-rate parks, what ever happened to Walt's idea of "plus it", meaning going the extra step to make something better?
Like you said, Illuminations was a wonderful, original show. But now everything has to be a nostalgic "I know that song/ character/ movie" moment. Why bother plussing something when a new attraction can throw in a popular character and become a popular attraction.

And, yes, this means no more brilliant original rides like Haunted Mansion, Pirates of the Caribbean, Journey into Imagination, and so on. Well, until they turn these rides into movies and people can "ride the ride that inspired the movie that now includes movie characters" (I forgot where that quote came from).