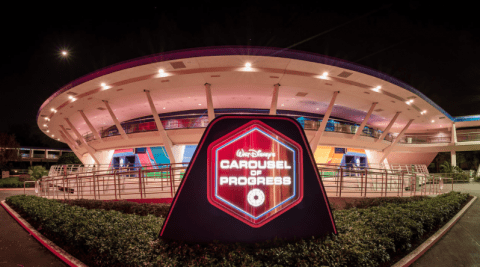 Some days, it seems that the only thing to stay the same is change. Luckily, that’s just the way Walt Disney liked it. It’s the reason that, among all the wonders at Disneyland during his lifetime, his friends and family say he singled out one attraction as his favorite, proclaiming that it should never cease operation. And fifty years later, it hasn’t… not for long, at least.

That’s what our Modern Marvels series is for: chronicling the complete, in-depth histories of today’s masterpiece attractions; living legends that are renowned the world over. Already, we’ve told fan-favorite stories of Disney’s most spectacular dark ride ever, Mystic Manor; taken the streets of New York to join The Amazing Adventures of Spider-Man; faced Imhotep’s curse on Revenge of the Mummy; scaled to the frigid heights of Expedition Everest, and so many more. And now, our most magnificent Modern Marvel yet joins our In-Depth Collection Library. 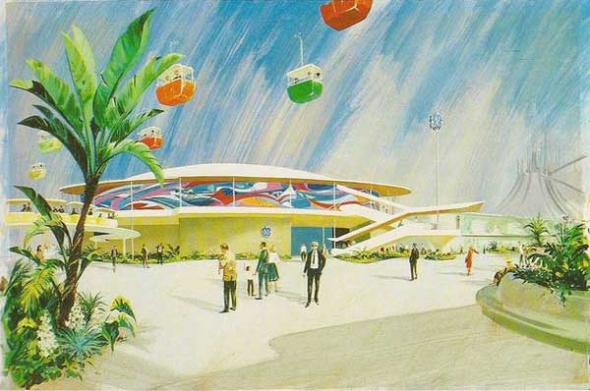 Five decades after its opening, Walt Disney’s Carousel of Progress is still ever-turning toward a “Great, Big, Beautiful Tomorrow.” But for all its longevity, this “revolutionary” attraction has never stayed put for too long… From unexpected origins in New York, a cross-country rebuild at Disneyland, and a final flight to its current Floridian home, today we’ll trace the in-depth story of this Modern Marvel and watch as Tomorrowland (and the Walt Disney Company) changed around it. 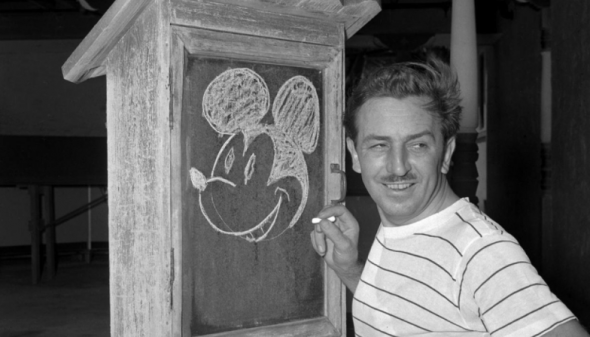 Walt Disney passed away over fifty years ago. And yet, most people alive today have a pretty good idea of who he was. Perhaps the more fitting question is, what was he? Sure, he was an artist, animator, voice actor, filmmaker, and producer; he was a businessman; a visionary; a dreamer. But to hear his friends and family say it, Walt was one thing above all else: an optimist.

Dedicated to ideals of American enterprise and industry, Walt was an idealist and a futurist practically enamored with the idea of progress. From his early days integrating new technologies and art forms into animation, to his revolutionary Disneyland with its unprecedented design by filmmakers and its industry-changing attractions… On Walt’s dying day, he was still dreaming, but bigger: urban design, mass transit, and his Experimental Prototype Community of Tomorrow. Those closest to him say that, in his hospital bed, he used the ceiling tiles to explain the gridded layout of his “EPCOT.” 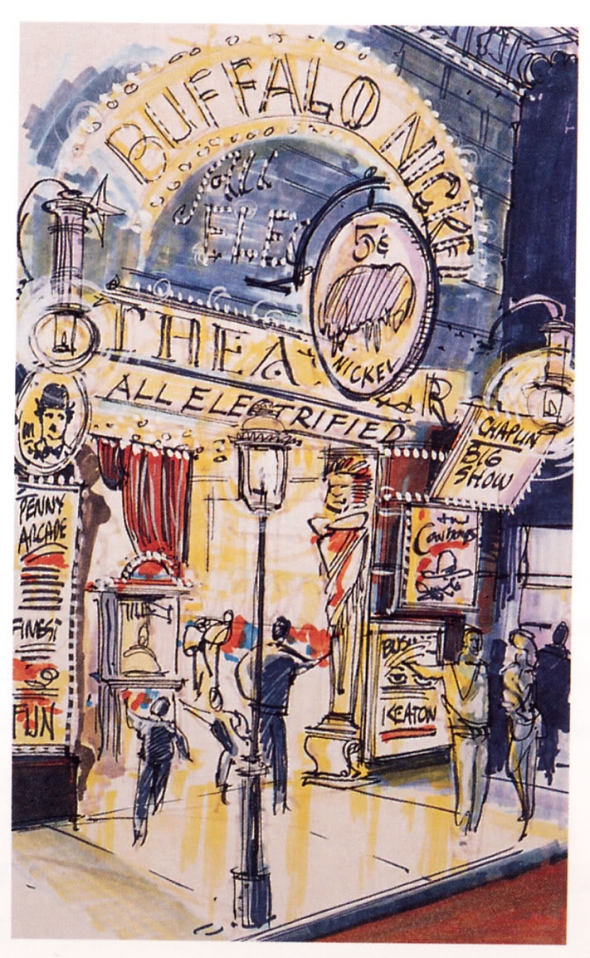 Walt’s continuous contemplation of progress was brought to life in Disneyland. It’s no coincidence that Main Street, U.S.A. is forever frozen at the turn of the 20th century, immortalizing the brief, fleeting moment when the gas lamp and the electric lightbulb coexisted; it’s no accident that Frontierland and its idling speed and storied foundation stands opposite Tomorrowland with its “new frontiers in science, adventure, and ideals.”

Shortly after Disneyland opened, plans were already in progress for its first growth spurt. One piece of that puzzle would be a new land constructed in a spur east of Main Street, U.S.A. behind Tomorrowland. True to Walt’s intention, Main Street would continue to represent the amazing moment in American history when the horse-drawn streetcar and the new automobile shared the road. 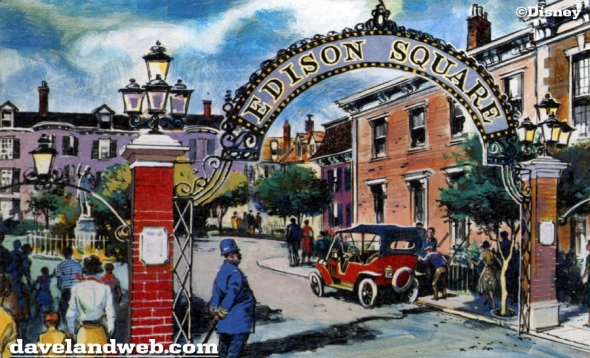 But now, those old clip-clopping carriages would continue down Main Street toward the Hub while, with the sound of their “ah-ooh-gah” horns, the cars would break away and pass under a wrought-iron archway aglow with the warm hum of the new electric lightbulb reading: EDISON SQUARE.

This new land would propel guests forward and into the big city, with facades designed to resembled Chicago’s graystones, wooden San Francisco, red-brick Boston, and New York’s brownstones in a cul-de-sac built around Progress Park and its iconic bronze state of Edison himself. 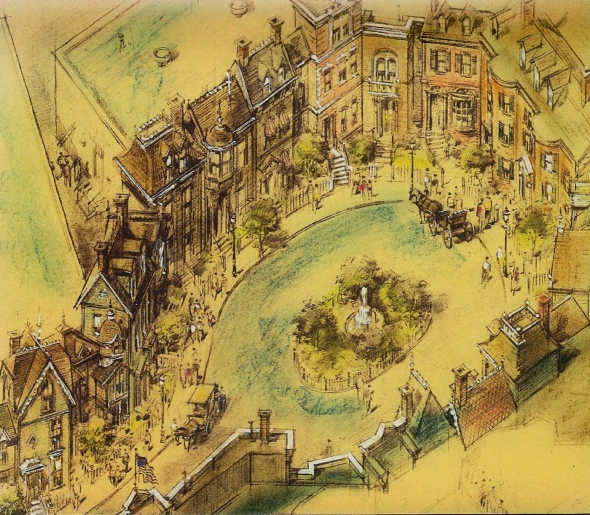 With 1,093 patents to his name (including the invention of the lightbulb, power utilities, the motion picture camera, and the phonograph), Thomas Edison was a figure worthy of celebration in the eyes of Walt. And it didn’t hurt that Edison was the founder of General Electric – by the 1950s, a massive technological national company – who was excited about the idea of sponsoring an entire land at Disneyland. GE had high hopes for Edison Square and for its headlining attraction… 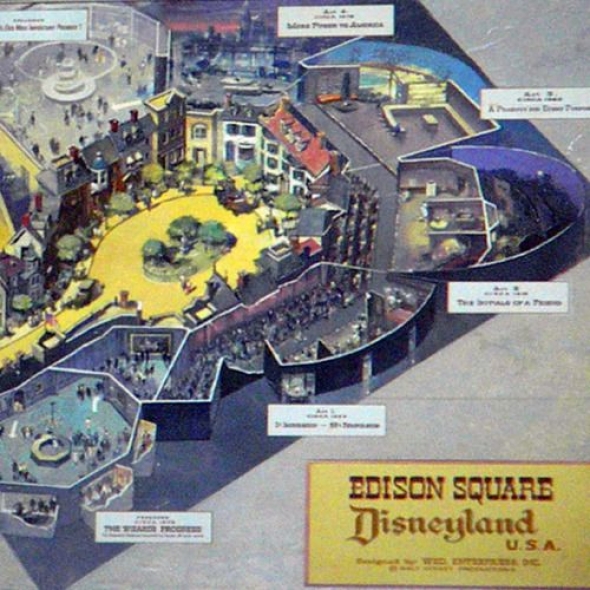 Cleverly concealed behind the cul-de-sac of facades forming Edison Square, General Electric’s Harnessing the Light would have been a state-of-the-art attraction and a product showcase for GE. Guests would enter into a prologue exhibit space about Edison and his discoveries, milling about in a museum of invention until a set of automatic doors opened, leading them into a tiered standing theater. Along three tiers, guests would gaze out over a set recreating the typical American home as it appeared in 1898 – just before electricity made its way into the living room.

The lovable Wilbur K. Watt, happily rocking in his chair, would show guests around, pointing out how the stove, icebox, and phonograph are all marvels of innovation, though they’re all human powered. Wilbur himself wouldn’t be much more advanced… a simple “electro-mechanical” figure, he’d only be able to perform repetitive actions controlled by simple machines (think of 1955’s Jungle Cruise animals). 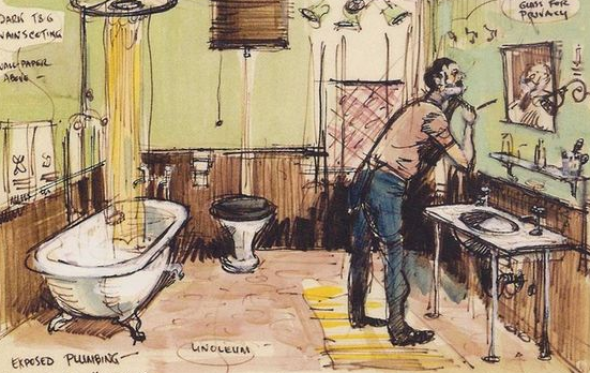 After three minutes or so, another set of doors would open to the left, with guests passing into the next theater – the same home 20 years later, in 1918 with bundles and bundles of wires strung throughout the home from water heaters, refrigerators, lightbulbs, and other early appliances.

Three minutes later, guests would walk forward through time again to 1958 (the “present” when Harnessing the Light would open) showcasing then-modern household marvels of climate-control, television, microwave opens, and more. Just look at the wonders of General Electric and its place in the modern American story!

Finally, guests would pass into a fourth scene, representing the home of the future: luminous walls, prototype personal computers, space scanners, and more! In this final scene, guests would be invited onto the stage to explore the possibilities of progress up close and hands-on… but only for three minutes, when the doors to the left would open again, this time into an epilogue exhibit showcasing the General Electric appliances available for sale. 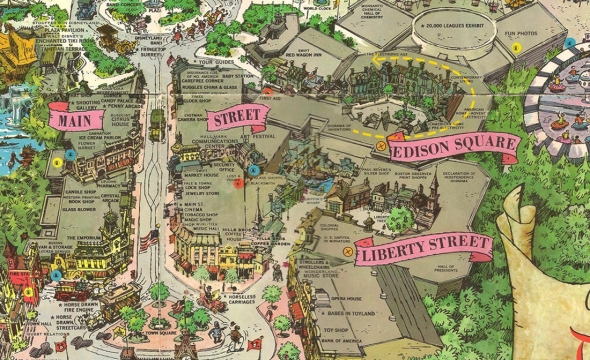 At its heart, Harnessing the Light was about progress, and the hopes and fears that always accompany it. Passing from theater to theater, guests would’ve gotten a sense of just how much life had changed for the average American family in the last sixty years, and how the innovation at General Electric had made life simpler and sweeter. It seemed perfectly positioned as a must-have addition at Disneyland.

Of course, it was never built. That's why all of Edison Square and its colonial neighbor, Liberty Street, made it into our walk through an alternate-reality Possibilityland of never-built Disneyland rides and lands.

But why did Disney drop the concept? 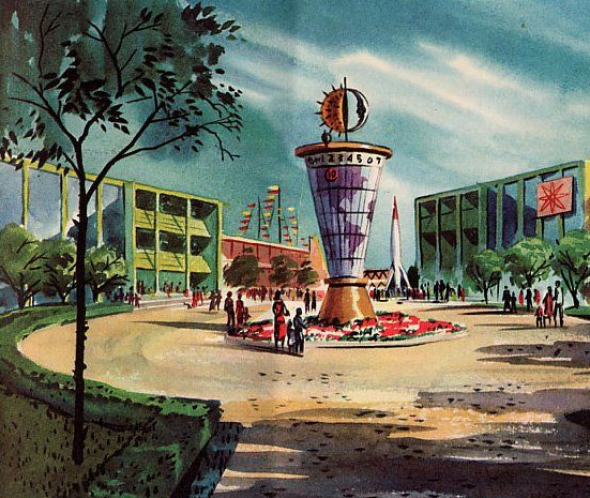 In the late 1950s, WED Enterprises (today called Disney Imagineering) had a lot on its plate. Opportunities for growth at the young Disneyland were countless, and Edison Square was one of many ideas floated for the park. Certainly, its focus on the future would’ve made it a pet project of Walt’s… except that he had a bigger future-fish to fry.

“A vista into a world of wondrous ideas, signifying Man's achievements... A step into the future, with predictions of constructed things to come. Tomorrow offers new frontiers in science, adventure and ideals. The Atomic Age, the challenge of Outer Space and the hope for a peaceful, unified world.”

Despite his lofty dedication at the park’s opening, Walt had been disappointed with Disneyland’s Tomorrowland from the start. Originally, he’d decreed that it would need to open after the rest of the park in a “Phase II” expansion, but ultimately decided to rush the construction of the land in order to have the whole park open on time. 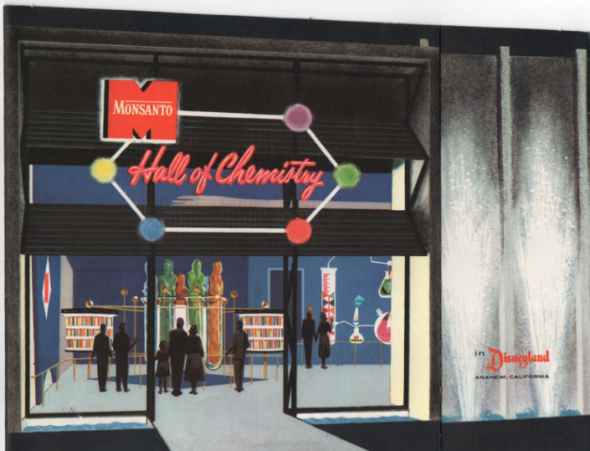 As a result, Tomorrowland in 1955 was little more than a corporate showcase with exhibit spaces rented out by companies eager to show their wares:

The Kaiser Hall of Aluminum Fame.

The Monsanto Hall of Chemistry.

The Crane Bathroom of Tomorrow.

Walt famously disliked that Tomorrowland had become such a bore and was determined to think bigger.

On June 14, 1959, a massive expansion to Tomorrowland opened, adding three new attractions – Matterhorn Bobsleds, Submarine Voyage, and the Disney-ALWEG Monorail – with each grand enough to earn the new E-Ticket designation created just for them. So enormous was this all-at-once unveiling, it was advertised and televised as a Re-Dedication of Disneyland!

Still, Walt was often said to comment that Tomorrowland was “still not complete,” and from that moment on, he must’ve decided to himself that sooner rather than later, the land would need a complete floor-to-ceiling rebuild…

Given all that, it’s no wonder that Edison Square was cancelled. Walt and GE reportedly agreed that, eventually, they’d build a time-traveling showcase, but that it would require some key innovations first… Would you believe that the road to the Carousel of Progress begins in earnest with a singing bird? Read on…