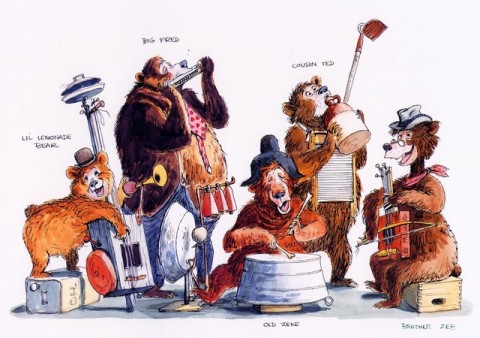 "Howdy folks! Welcome to the one and only, original, Country Bear Jamboree — featuring a bit of Americana, our musical heritage of the past. And right now, I give you a sordid assortment of executioners of music and song...!"

One of the most exceptional attractions ever to come from the minds at WED Enterprises, the Country Bear Jamboree was truly a sensation. Opening alongside Magic Kingdom in 1971, this Audio Animatronic ursine adventure captured the imagination of a generation of Walt Disney World's first guests, and continues to be a family favorite to this day. But would you believe that it was never meant to play at Disney Parks?

Walt and one of his favorite designers had very different plans for their cutting edge bear band... plans that would've placed this rootin', tootin', hollerin' hoedown hours from Disneyland in the snow-covered forests of Central California. Today, we simultaneously induct the Country Bear Jamboree into our In-Depth Library, packed with must-read tales of Lost Legends, and the astounding stories of Modern Marvels thrilling guests across the world today. In which does the Country Bear Jamboree belong? Both.

Join us on our in-depth journey as we trek through the can't-miss story of how this Animatronic show came to be, where its curtains fell, and how the legend of the Country Bears lives on... 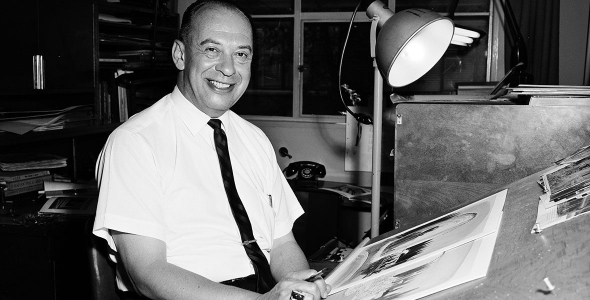 The story of the Country Bear Jamboree has to begin with its brilliant creator, Marc Davis. A revered Disney Legend, Marc was among Disney’s “Nine Old Men” – the core animators who joined Disney’s still-young studio in the 1930s, shaping the nascent art form of animation and creating the studio’s early feature films.

Marc was given a particularly impressive role at Walt Disney Studios, acting as the lead designer and animator of the title character from Snow White and the Seven Dwarfs (1937), Mr. Toad and “The Wind in the Willows” cast of The Adventures of Ichabod and Mr. Toad (1949), Cinderella herself (1950), Alice from Alice in Wonderland (1951), Peter Pan’s Tinkerbell (1953), Sleeping Beauty’s Aurora and Maleficent (1959), and Cruella de Vil from 101 Dalmatians (1961). 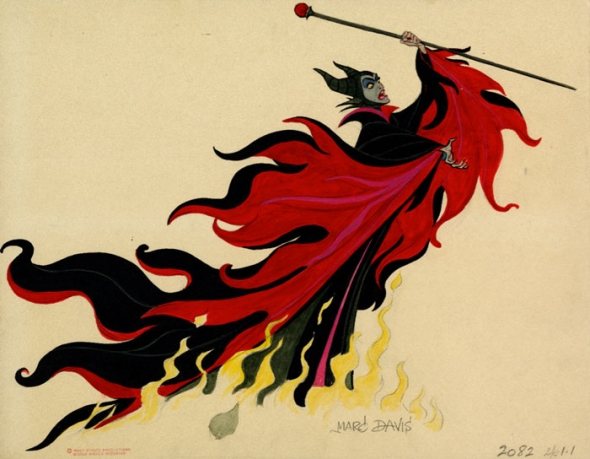 In the early 1960s after their work on 101 Dalmatians, Marc and a few other animators began scouring through Disney’s archives and discovered concepts from a never-completed film called Chanticleer – an animated adaptation of the early 20th century French stage production “Chantecler” by Edmond Rostand. 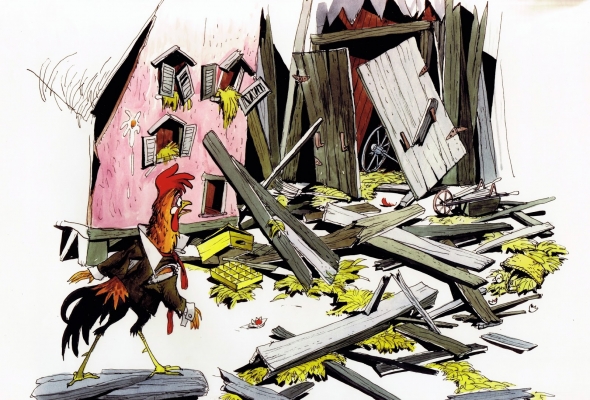 Chanticleer would tell he story told of a vain rooster who sincerely believed his crowing is what caused the sun to rise each morning (earning the adoration of the other animal inhabitants of a 19th century French farm) and the noble lessons he learned when a band of scheming and hungry nocturnal “Night Creatures” tried to use his cockiness to win the trust of the farm animals to try to eat them for dinner.

Walt was reportedly optimistic about Chanticleer’s second lease on life and asked Marc to forget any of the old 1940s concept art he’d found and start over from scratch. However, Roy Disney began pressuring his brother to abandon animation altogether and shift his focus (and finances) back to Disneyland and WED Enterprises, hard at work on the masterpiece attractions set to debut at the 1964 – 65 World’s Fair. 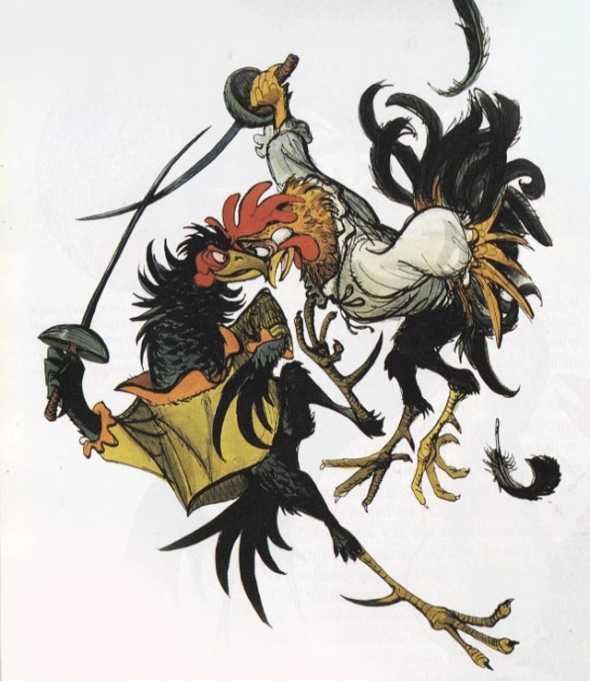 Disney relented and agreed that only one of the two feature films his animators were pursuing should move forward. The Sword and the Stone won over Chanticleer simply because humans take less time (and thus, money) to animate than animals do. The Sword in the Stone premiered Christmas Day, 1963, and Chanticleer was benched again.

But don’t worry… Marc Davis wasn’t out of a job. In fact, he was moved on to bigger, better birds.

From animation to Animatronics 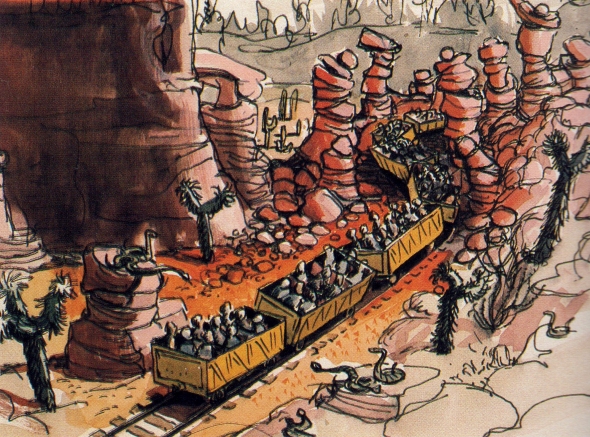 In 1962, Walt asked Marc to bring his character eye and penchant for perfectly staged animated scenes to Disneyland, and particularly to take a “good, hard, critical look” at one of the park’s signature attractions: Frontierland’s Mine Train Thru Nature’s Wonderland. Walt was somewhat unsatisfied with the attraction, which had only opened in 1960 as a supposed American west equivalent to the Jungle Cruise. 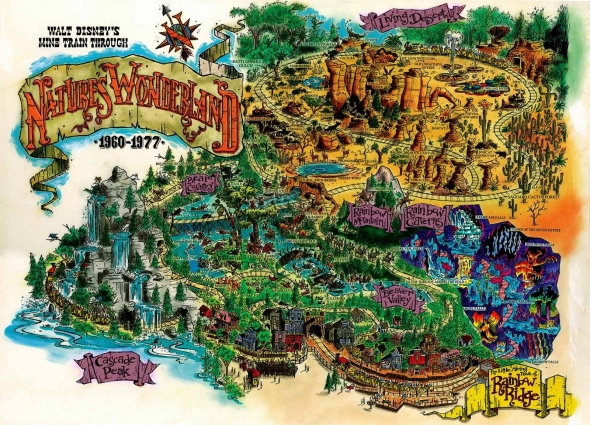 Marc made dozens of drawings of how the Mine Train Thru Nature’s Wonderland could be improved, and just a few hours after telling Walt, he was invited to a meeting with all of WED Enterprises. A “stranger from animation,” Marc walked through his dissections of the park’s attractions one-by-one, with Imagineers growing angrier and angrier with each description of what they’d done wrong.

Though his background was with the company’s studio, Marc became Walt’s go-to for restaging Disneyland’s rides to include more humor and iconic characters. Walt’s seeming favoritism of Marc’s designs caused hostility, and Marc spoke of an unnamed WED Enterprises executive who walked by his desk while he was sketching and condescendingly asked, “And what are you doing with your little pencil now?” 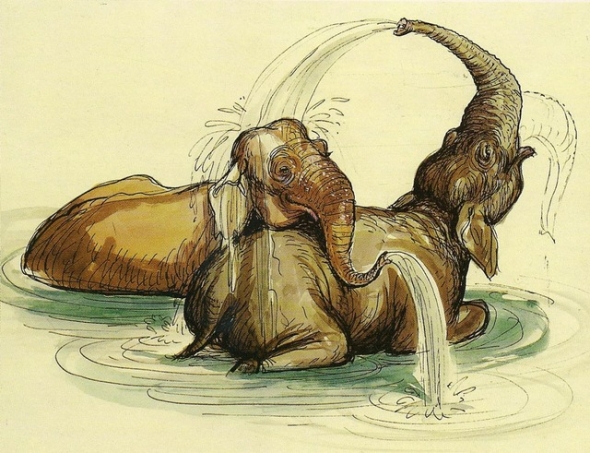 What he was doing was exactly what Walt had asked. Even if he initially made few friends in Imagineering, Marc had a friend in Walt. He was asked to add his signature staging and humorous vignettes to a redesign and expansion of Disneyland’s Jungle Cruise, which – throughout the 1960s – gained the Indian elephant bathing pool, the ruins of a temple of Ganesha, the design of the African veldt scene, and the iconic “trapped safari,” all from the mind of Marc Davis. 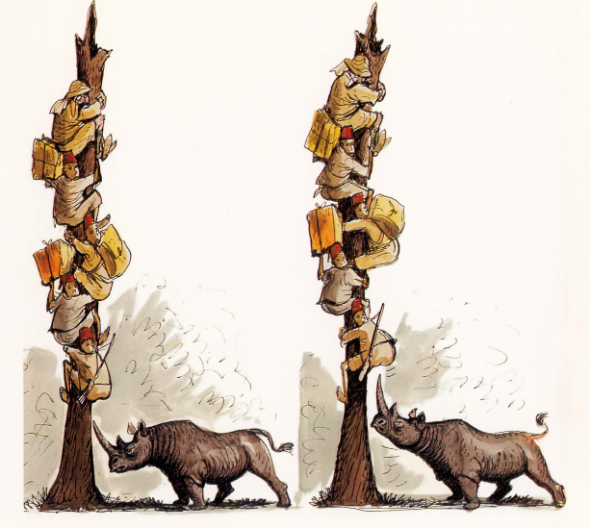 It makes sense, doesn’t it? Those signature scenes all read like snapshots in a film. Davis was somehow able to expertly stage those set-ups as living moments, perfectly translated from “screen to stage” before our very eyes.

It was Davis’ signature style that created the lovable ease of The Enchanted Tiki Room show, utilizing the first ever Audio Animatronics figures. The Tiki Room remains a shining example of Davis’ character-focused design specialty. 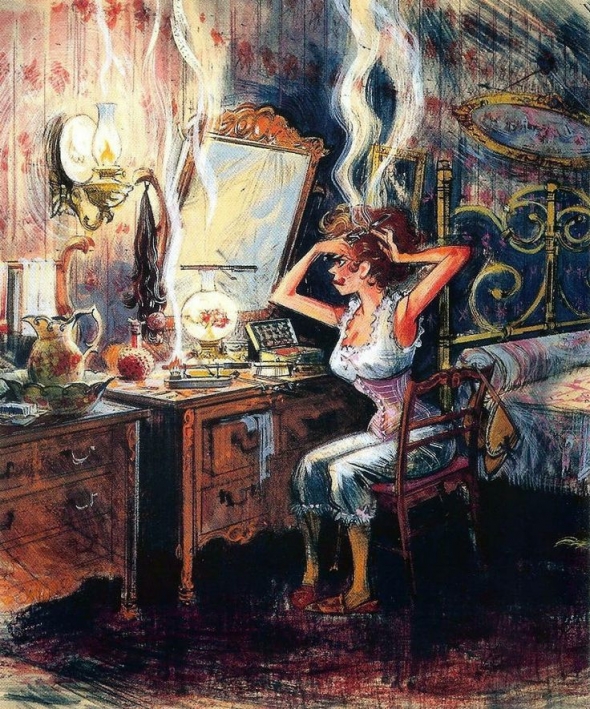 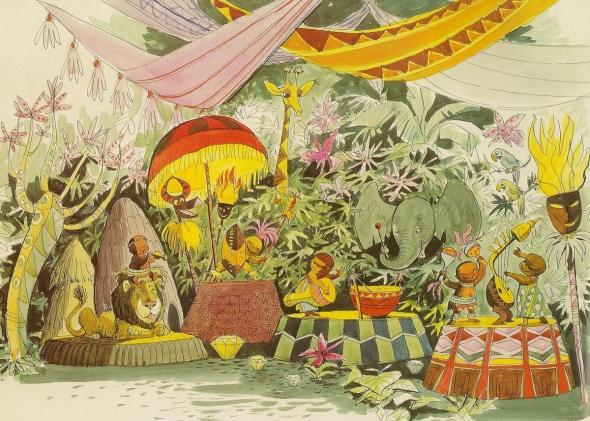 … Even the often-overlooked Ford’s Magic Skyway at the World’s Fair saw guests in motorless Ford convertibles gliding through scenes of a primeval world staged by Marc Davis.

(He’d later go on to be the mind behind the more sing-along, character-infused second-halves of Pirates of the Caribbean and the Haunted Mansion, with his peer Claude Coats forming the more atmospheric, eerie, character-less environments of the first halves of both rides, respectively.) 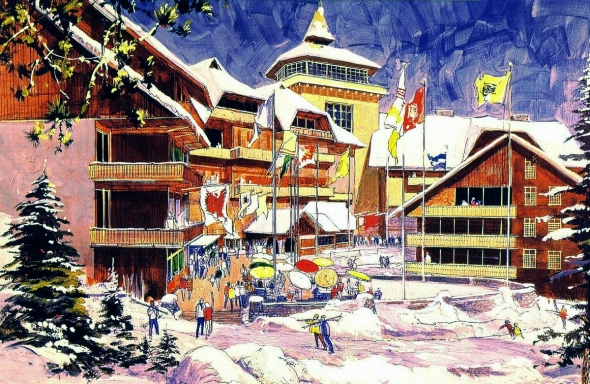 And as the World’s Fair came to a close, Walt Disney was already moving forward. He had ambitious plans for a new kind of attraction, and of course, he always intended to bring Marc Davis along… And in a remote mountain pass about halfway between Los Angeles and San Francisco – deep in the Sierra Nevada Mountain Range of Central California – a one-of-a-kind Audio-Animatronic show was assured… Read on…