SPACE MOUNTAIN: The Full Story of How Disney's Interstellar Ride Was Launched 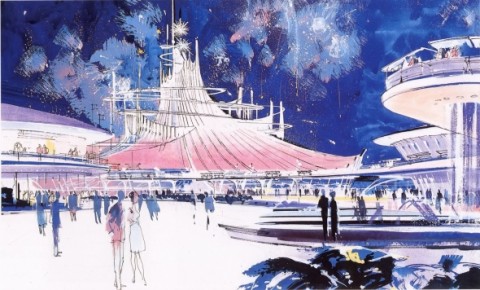 Some Disney Parks attractions feel so classic – so essential – it's almost difficult to imagine the park without them... That's exactly how fans feel about Space Mountain, a perennial favorite whose mid-century, Space Age silhouette is literally an icon of Disney. But believe it or not, there was a time when Tomorrowland existed without Space Mountain as its anchor; a time when Disney's designers were hard at work figuring out what, where, and how an interstellar race through space should exist...

That's why the spectacular tale of Space Mountain enters Theme Park Tourist's much-loved LEGEND LIBRARY – our one-of-a-kind Imagineers' index, and a growing, comprehensive collection of in-depth stories exploring Disney's best (and worst) attractions on Earth. Standing among other revered Modern Marvels from Phantom Manor and The Enchanted Tiki Room to DINOSAUR, Radiator Springs Racers, and more, Space Mountain has earned its status with over forty years of whisking guests through the coldest depths of our galaxy and beyond.

How did this roller coaster in the dark come to be? How does it differ between its installations in Florida and California? How have Imagineers tweaked (or sometimes, entirely rewritten) the ride for Disney's international parks? Join us as we blast off into this Modern Marvel. Go for launch! 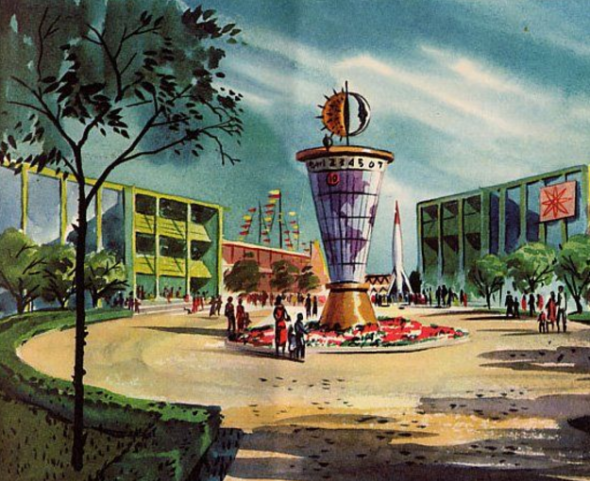 So many stories of Disney's most legendary attractions begin in the Tomorrowland guests found when they stepped into Disneyland in 1955. Given that Disneyland's opening was just one year and a day after the first shovel of dirt had been moved, it was inevitable that parts of Walt's park wouldn't look exactly the way he'd hoped, and Tomorrowland was the prime offender.

With a short time table and a quickly-dwindling budget, Tomorrowland turned out to be little more than a land of corporate displays and showcases rented out to Kaiser Aluminum, Dutch Boy Paint, Crane Plumbing, and more. Still, the ingredients of Tomorrowland were born. Set in the inconcievably distant year of 1986, this land of the future did feature a few stand-out experiences, like a walk through the "Nautilus" from Disney's blockbuster hit of the prior year, 20,000 Leagues Under the Sea. 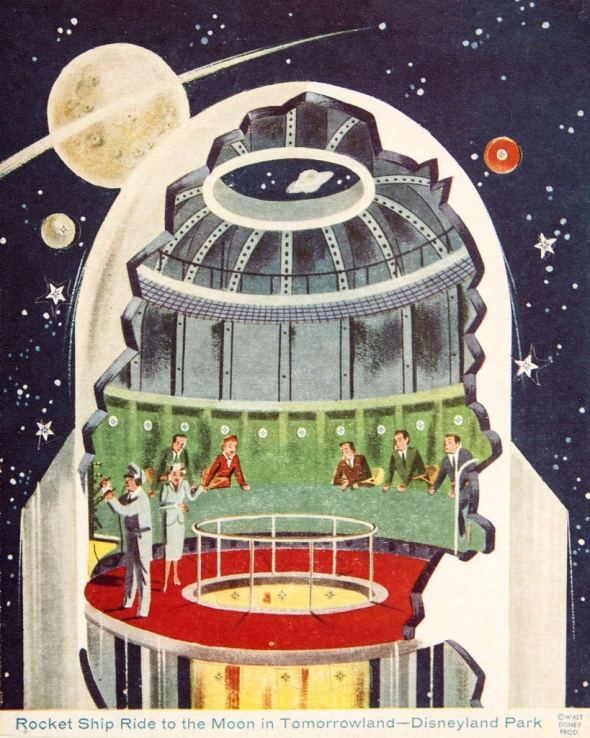 One of the few "Disney original" attractions offered was Rocket to the Moon, a (motion-less) simulator giving awe-struck audiences of the 1950s a glimpse into what space travel could look like. While simple, the theater-in-the-round production was one of the few "Disney originals" in the land, and set the stage for connection between Tomorrowland and space that seems so essential today.

Walt was often known to remark that Tomorrowland was not yet complete. Just four years after the park's opening, the land make a leap forward. Three brand new attractions opened that year, each astounding enough to warrant a new "E-Ticket" ride coupon – the park's most expensive and limited. 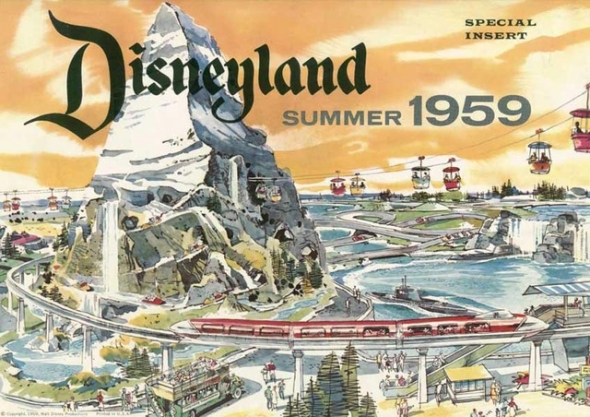 While the Submarine Voyage was astounding in its scale, and the Disneyland-ALWEG Monorail was a first-of-its-kind prototype of what tomorrow's mass transit could hold, it's the towering Matterhorn Bobsleds that matters to our story today. The first modern, tubular steel-tracked roller coaster (and the first roller coaster to permit more than one train on the course at a time due to block brakes and a controlling computer system), Matterhorn Bobsleds is best known today for being the first of Disney's mountains... and thus, the first overt thrill ride at Disneyland. 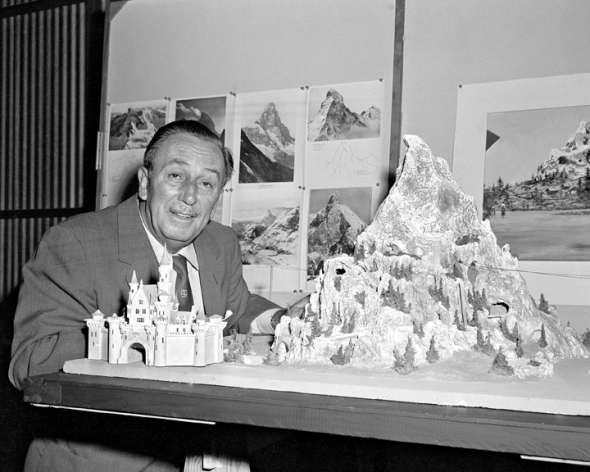 Walt's long-standing moritorium on thrill rides had been lifted by way of the Matterhorn; evidence that roller coasters could indeed fit in his park, but only if they were masquerading as more...

From snow to the stars

Despite its massive build-out in 1959, Walt still wasn't quite finished with Tomorrowland. He and his designers were already ruminating about a potential floor-to-ceiling overhaul of the land's aesthetic. Naturally, we can see why. In the 1960s, a very clear vision of "tomorrow" was created in American pop culture. Our collective, societal consciousness had settled into the sleek, "mid-century modern" style of upswept roofs, parabolas, "mod" furniture, atoms, starbusts, and simple geometric patterns.

This was a country in the midst of the Space Race, on the verge of the Atomic Age; a society imagining an optimistic future among the stars spurred by NASA; a culture shaped by Populuxe architecture.

The boxy, corporate, '50s-designed Tomorrowland was outdated before its tenth anniversary. Tomorrowland needed to catch up.

Luckily, the work WED designers had put into the 1964 - 65 New York World's Fair was about to pay off. For that international expo, Disney had debuted four spectacular attractions, each of which was now en route back to Disneyland where a New Tomorrowland was taking shape. The newest iteration of the land would debut in full in 1967 with a star-studded attraction lineup to make Disney Parks historians weak – Lost Legends: Adventure Thru Inner Space, Carousel of Progress, and The Peoplemover to name just a few.

Walt also spoke with Imagineer and Disney Legend John Hench about the possibility of a roller coaster through outer space as a headliner of this reborn land. And like Matterhorn, it would hidden away in a "mountain" of its own; an iconic, Space Age-inspired, Googie-style dome looming over the land and anchoring this "New Tomorrowland's" visual style. The attraction was called Space Port. 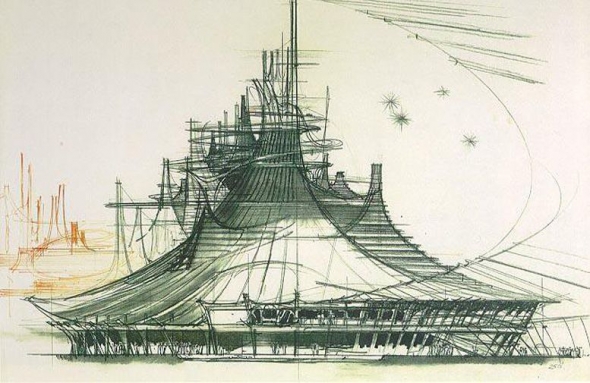 It's said that Walt and his team even began initial talks with Arrow Development – the manufacturers of the Matterhorn Bobsleds – on the design and development of a potential roller coaster. Or maybe, coasters.

Matterhorn is actually comprised of two separate, slightly-different roller coasters (the "Fantasyland" track and the "Tomorrowland" track), each operating independently even as their tracks slalom alongside each other. To up the concept's capacity, it's said that Walt hoped to have four independent tracks operating on Disneyland's second coaster, Space Port.

However, Space Port and the entire New Tomorrowland project were sidelined. That's because Walt and his WED Enterprises had turned their attention elsewhere. While a team would continue on at Disneyland on Pirates of the Caribbean and Haunted Mansion, another would head east to a swampy plot of land outside of Orlando where the long-gestating "Florida Project" was coming together...