INSIDE THE GRID: "Derezzing" the History and Future of the Shanghai E-Ticket Coming to Disney World 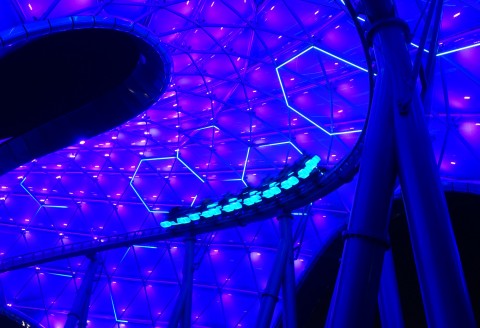 It’s not every day that a ride revolutionizes an entire resort... but that just may be on the horizon at Walt Disney World thanks to a controversial new ride that’s already thrilling guests on the other side of the planet... Technologically cutting-edge, this 21st century coaster finally brings to life a fan-favorite, cult classic intellectual property, and in the form of its own Tomorrowland E-Ticket. The question is, will it be worth the wait?

Our Modern Marvels series was designed to dive deep into the behind-the-ride stories of some of the most spectacular theme park attractions in the world today. In in-depth features, we went from “Once Upon a Time” to Frozen Ever After to explore disney’s long pursuit of The Snow Queen story, tackled the curse behind Revenge of the Mummy, dug into two of Disney’s best rides ever – Mystic Manor and Journey to the Center of the Earth – and many more in our In-Depth Collection Library. 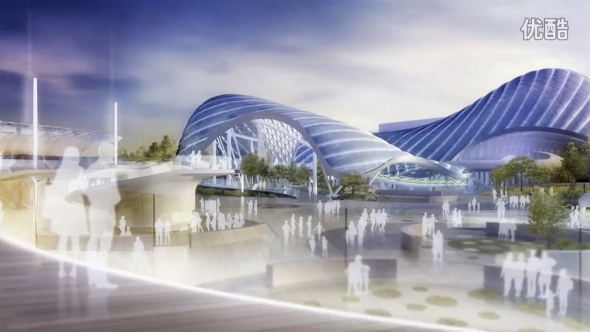 Today, we race into another living classic... one destined to change Walt Disney World forever. Join us as we sail through tomorrow and explore the history of headlining Tomorrowland thrill rides from Space Mountain to the incredible TRON Lightcycle Power Run due to join Walt Disney World’s lineup sooner than you think. From outer space to the neon glow of the Grid, it’s time to ride through this amazing Modern Marvel.

At least in Tomorrowland’s earliest years, Walt and his designers intended for Tomorrowland to be a living, breathing showcase of sincerely-scientific endeavors – “a vista into a world of woundrous ideas, signifying man’s achievements... new frontiers in science, adventure, and ideals; the Atomic Age, the challenge of Outer Space, and the hope for a peaceful, unified world.”

That vision of Walt’s is probably most fully incarnate in the New Tomorrowland that debuted in 1967 at Disneyland Park – a blissful, geometric land of streamlined towers, silver, white, and pastel accents, geometric planters, and kinetic energy. Though Walt died several months before this New Tomorrowland debuted, his fingerprints dotted the land.

He wanted it to be a “World on the Move” both figuratively and literally – an ambitiously smart, optimistic, and forward-thinking showcase featuring phenomenal Lost Legends: Adventure Thru Inner Space, Carousel of Progress, and the beloved and fan-favorite Peoplemover. 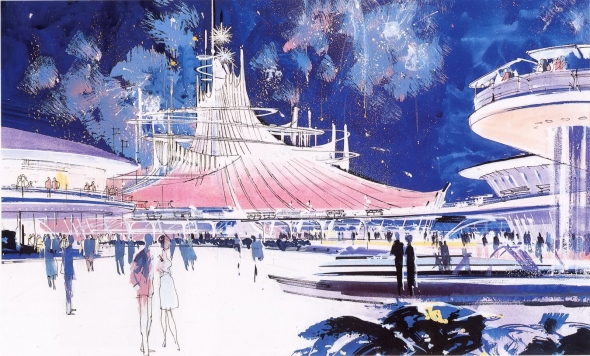 As a centerpiece for the land, Walt had briefly worked with John Hench on a design for a roller coaster through space... a groundbreaking, indoor, steel roller coaster through the stars, taking all that had been learned from Disneyland’s Matterhorn a decade earlier (the first modern steel coaster on Earth). Briefly, Imagineers considered this “Space Port” coaster with up to four separate tracks weaving through the darkness, but in light of the growing ambitions of the “Florida Project” about to be undertaken, the Space Port was put on hold... at least, temporarily.

From the Snow to the Stars

After Walt’s death, a period of relative instability overtook Walt Disney Productions and the Disney Parks. Without Walt’s creative lead, projects fizzled and the parks stagnated. That’s why the ‘70s are largely marked by lightly-themed roller coasters. 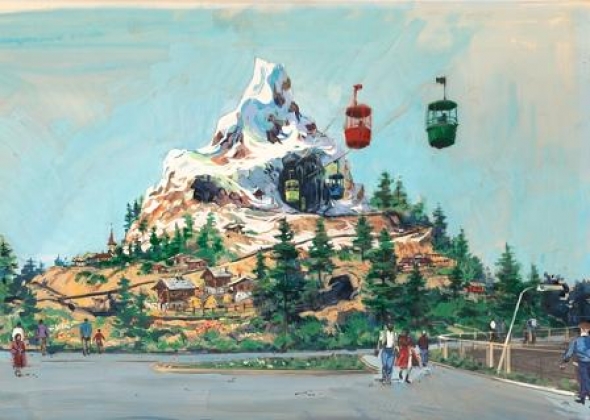 Don’t misunderstand – roller coasters have been a part of Disney Parks from the earliest years. 1959’s Matterhorn Bobsleds – the first modern, tubular steel-tracked coaster in the world – was groundbreaking in every way. On the other end of the spectrum, its own “spiritual sequel” and another Modern Marvel: Expedition Everest is nothing short of a technological powerhouse and a highly-themed, story-centered dark ride all in one.

Particularly in the ‘70s, though, new executives were looking for quick turnarounds on easy-to-build, low-cost attractions; light on Audio Animatronics and instead banking on the new steel roller coaster craze, such “cheap and cheerful” rides would earn great returns with much less investment than a ride like Pirates of the Caribbean or its never-built Magic Kingdom counterpart, Western River Expedition.

And given that Magic Kingdom’s Tomorrowland was more or less vacant, and that more pre-teens than expected had descended on the Vacation Kingdom of the World looking for thrill rides, plans for “Space Port” were dusted off and migrated to Florida. 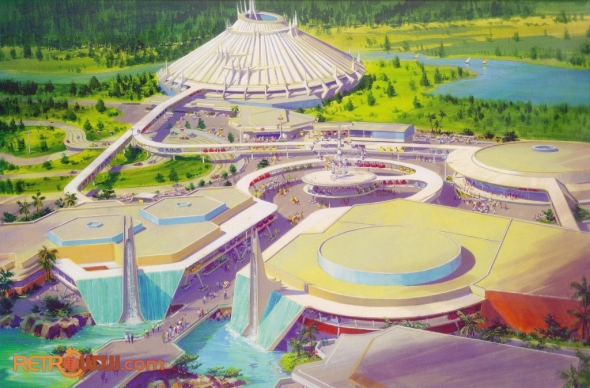 Space Mountain had its grand opening at Magic Kingdom on January 15, 1975, with the iconic, conical white structure housing two side-by-side, mirror-image roller coasters modeled off of Disneyland’s Matterhorn. More than just a headlining attraction for the young park, Space Mountain also set the visual style for Magic Kingdom’s own Tomorrowland – an evolution of Disneyland’s 1967, but given the benefit of hindsight... and an additional 8 years of gestation to adjust for changing views of the future.

Naturally, Space Mountain found its way home, opening at Disneyland in May 1977 – a decade after Walt’s death and his New Tomorrowland’s debut. Since Magic Kingdom’s Space Mountain had borrowed from Disneyland’s Matterhorn, engineers went back to the drawing board and created an original, single-tracked Space Mountain for Disneyland. 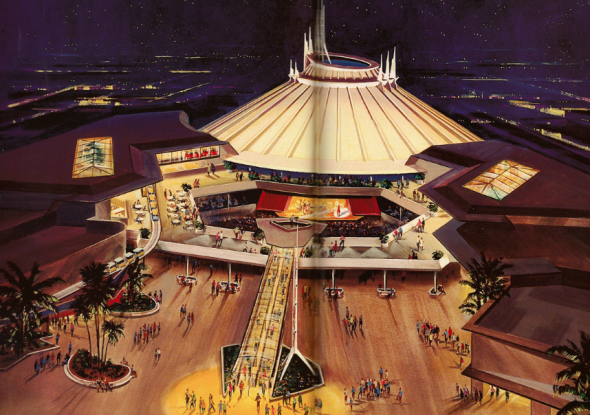 That Space Mountain was duplicated for Tokyo Disneyland’s 1983 opening (the first Disney Park to open with a Space Mountain, thus purposefully positioning the mountain at the end of the land’s entry corridor).

At the pinnacle of the Space Age, Space Mountain may have been an icon... an interstellar adventure turning a generation into astronauts at the height of the Space Race. In ‘60s-inspired Tomorrowlands shaped by the ‘70s, these two Space Mountains would become classics. 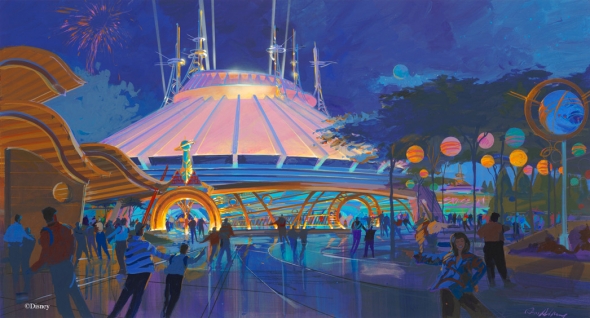 And even today, their styles and stories are reflections a period in history they helped shape. Which is why Space Mountain retains a sort of timelessness that such a time-anchored attraction usually wouldn't, recreated in its distinctly-'70s dressings even in the 21st century Hong Kong Disneyland in 2005. Space Mountain is somehow ageless... Each installation feels nostalgic, but current – able to withstand even the most dramatic changes in pop culture's vision of what "tomorrow" might really bring.

That's why the real story here is how the world around each Space Mountain changed... And as the ‘70s gave way to the ‘80s, the “future” wasn’t looking quite as bright as it had in Walt’s day... And a new Disney film released at the start of the decade would help shape that new kind of future... and help shape the new kind of thrill ride to join Disney Parks... Read on...