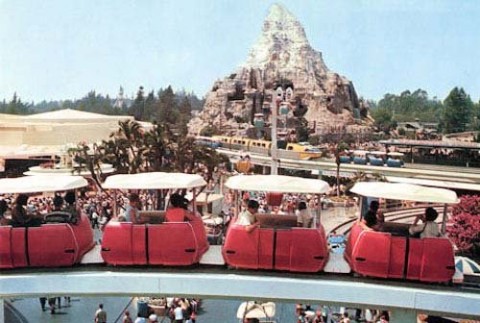 Some attractions aren't meant to last. Some rides simply meet the end of their operational lives thanks to improving technologies that make them obsolete. Sometimes, attractions lose favor as a new generation begins to visit the parks and loses touch with classic rides. Unfortunately, there are times that rides need to be removed to make way for something bigger, better, grander. Some attractions simply aren't made to withstand the test of time.

Make no mistake: none of that is true of the PeopleMover. Gentle, simple, and outstanding in concept and execution, the progressive PeopleMover in Walt's Tomorrowland at Disneyland was a prototype for the future – one of Disney's innovations aimed at making life better for everyone. And today, this spectacular showcase of innovation and ingenuity joins our growing library of Lost Legends – in-depth stories dedicated to the most spectacular closed classics on Earth.

How can such a simple, slow-moving attraction be remembered by Imagineering fans today as a legendary loss? How did this Space Age innovation come to be? How did it work? What was it like to take a tour through Tomorrowland along its elegant elevated highways? And what became of the ride both in its original Anaheim incarnation and in its Orlando sister?

And long-time readers of our in-depth entries know, the story of a beloved attraction usually begins well before the first riders ever step on board. And to trace the rise and fall of Walt's Tomorrowland and the optimism, futurism, and innovation that went into it, we have to begin in the past...

When Disneyland opened in 1955, the Tomorrowland guests stepped into was a world away from the one we know today. As a matter of fact, it was quite a bit different than Walt himself had hoped, too. From the time Disneyland broke ground to its official opening day in July 1955, exactly one year and a day had passed. Running short on time (and money), Walt had officially halted construction on Tomorrowland in the fall of 1954, resigning himself to the idea that his "vista into a world of wondrous ideas" would simply need to open in a Phase II expansion once the park had recouped some of its initial investment.

But that winter, he decided to change course. Construction went ahead on Tomorrowland, even if it would pared down from Walt's initial dreams.

Arriving guests discovered a land entered via a Courtyard of Flags representing all 48 states (you read that correctly) surrounding the iconic World Clock. Beyond, the towering 72-foot-tall Moonliner rocket acted as the visual "weenie" to draw guests further in, as well as the icon of Disney's Rocket to the Moon theater-in-the-round attraction. Otherwise, Tomorrowland featured the classic Autopia as well as a walkthrough of the sets from Disney's 1954 film 20,000 Leagues Under the Sea.

If it doesn't seem like enough to fill a land, you're right. To add to the park's lineup (and its revenue), Tomorrowland was famously filled with corporate exhibitions. Walt had in effect rented out real estate within Disneyland, resulting in "attractions" like the Crane Bathroom of Tomorrow, the Kaiser Aluminum Hall of Fame, the Dutch Boy Paint Color Gallery, and the Monsanto Hall of Chemicals.

As a matter of fact, it wouldn't be until the park's second year that the land would finally gain the spiraling Astro Jets so associated with Tomorrowland today (even if this version was merely a bare carnival ride installed at ground level) and fellow Lost Legend: The Skyway, ferrying guests to and from Fantasyland.

If you asked Imagineers, this Tomorrowland was set in the then-distant 1986 – a year so incomprehensibly far away, it might as well have been the stuff of science fiction. Imagine, for example, if today's Tomorrowland tried to accurately and scientifically showcase the styles and technologies of 2050... While commercial flights to the moon may not have been available by the real 1986, Walt's designers actually did a respectable job predicting the textures, styles, and atmosphere of the Space Age!

Even if it's hard today to see much futurism in this land of concrete walls, white and red canopies, fluttering flags, and the nascent hints of the Space Age, this relatively simple version of the land was nonetheless important in establishing tried-and-true hallmarks of the concept today, like mirrored showbuildings spanning an entry corridor and an inner courtyard with spinning rockets at its center. It also debuted what would become another hallmark of Tomorrowland: not staying the same for long.

Given that Tomorrowland just wasn't what Walt had hoped, it was a focus of substantial growth right from the start. 1957 saw the opening of the fabled Monsanto House of the Future, where guests could tour through a dynamic  cantilevered home that dreamed of picture phones, remote-controlled televisions, and the must-see microwave oven that stopped visitors dead in their tracks. (The countertop version wouldn’t be available for another ten years.)

But it was nothing compared to what followed. In 1959 – just as the park turned four years old – Walt himself oversaw the opening of three attractions so vast in scope, they required the invention of a new most expensive and limited ride ticket to experience: an E-Ticket. This all-at-once expansion on previously unused land between Fantasyland and Tomorrowland was so grand, a "Grand Re-Dedication" of Disneyland was broadcast on television to celebrate.

The massive influx of resources and attention on a mostly-undeveloped corner of Tomorrowland was no accident. With 1960 on the horizon, Tomorrowland had become something of a project for Walt. While the rest of the park was growing, Walt had felt since opening day that Tomorrowland was “not quite finished.” Luckily, a spectacular opportunity would soon arise, providing Imagineers with all the tools they'd need to create the "great, big, beautiful tomorrow" Walt dreamed of.

Beyond the berm of Disneyland, America faced a tremendous era of change. The emerging 1960s were a wild departure from the 1950s, and the two decades’ ideas of the future had changed proportionally. At Walt Disney Imagineering, ambitious projects were setting a new gold standard... except the work they were developing wasn't for Disneyland at all.

In fact, Walt and his Imagineers were at work designing attractions for the 1964 – 65 New York World’s Fair, where they'd been contracted to create shows for four exhibitors at the expo. With the opportunity to experiment and innovate without financial burden, it's no surprise that the four attractions they developed were pivotal to the history of Imagineering:

At the close of the World's Fair in 1965, Walt's team had added to their playbook the priceless innovations, technologies, and ride systems that they'd developed for the Fair (which would eventually coalesce into Walt's magnum opus, Pirates of the Caribbean). To walk's thinking, though, at least one of those concepts would evolve. In fact, though Ford's Magic Skyway was not directly relocated to Disneyland, the technology that powered it was just what Walt needed... Read on...

So to bring the PeopleMover back, Disney would have to:
1. Introduce a propulsion system like the one used at DisneyWorld.
2. Add wheelchair-accessible emergency exits both in the show buildings and on the outside portion above the Autopia/Submarines/Monorail area. Probably one exit every certain amount of feet, and a smooth ramp/walkway for wheelchairs to move on until you get to either the Monorail station, the Buzz Lightyear building, or the Innoventions building.
3. Repair the structural integrity of the elevated portions of the track (goes in hand with #1)
4. Record new narration/character lines that talk about Star Tours: The Adventures Continue, the gift shop after it, maybe whatever's playing at the theater, a new "Tron" thing based on Tron: Legacy, whatever is in the carousel building, Finding Nemo Submarine Voyage, Autopia, and the Monorail, and finally, new narration/character lines as we see people playing Buzz Lightyear's Astro Blasters. I'm not sure, but I think the ride tracks go past what is now currently the room where you shoot at Zurg. (If anyone can confirm this, that'd be great.)

Anything I missed? Surely all of that would be less expensive than Pixar Pier or Star Wars Land.

Thanks for the great read!
In my eyes the biggest travesty of all was the demo/covering of the brilliant Mary Blair murals.
Truly Barbaric, Monsters!!
Please for the love of god, if there is anything left of them?! Salvage now!

I remember as a boy the speed tunnel was great!