From “Once Upon a Time” to Frozen Ever After: Inside The Dark Ride That Changed The World Showcase 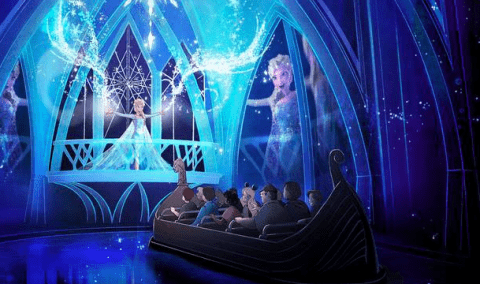 From the bottom of the seas; to the moon and back; through wicked woods and haunted hotels; ancient temples to inside the imagination; from the microscopic world to the origins of the universe... For more than sixty years, Disney Parks have brought unthinkable adventures to life.

And for even longer than that, the minds behind Disney have been trying to bring one particular fairy tale to life. Over decades, Disney animators, designers, storytellers, and Imagineers had been cracking away at the icy case of The Snow Queen, trying to incorporate this ethereal character into their movies, cartoons, and theme park attractions. The evolution of this chilling wintertime tale is a plotline in and of itself, and today, we'll trace the snowy story of Disney's frosty relationship with The Snow Queen and how it gradually evolved into one of the most spectacular rides at Walt Disney World today – a verifiable Modern Marvel joining our In-Depth Collections Library of must-read features.

From "Once Upon a Time" to Frozen Ever After, you may be surprised by the many threads that came together to create the ride that just may change Epcot forever... Settle in.

In the pantheon of great storytellers, there are certain names that will be celebrated forever as legends. A look across Disney’s animated films reads like a master list of writers… Lewis Carroll's Alice in Wonderland, J.M Barrie’s Peter Pan, P.L. Travers’ Mary Poppins, A.A. Milne’s Winnie the Pooh, and dozens more have all been brought to life through Disney’s one-of-a-kind animation style.

Indeed, while Disney’s adaptations have become the definitive versions of centuries-old classics by many, it’s important to remember that before Walt was even born, Jacob and Wilhelm Grimm – German academics and authors – had collected and at last recorded popular tales that had previously only circulated between generations via oral tradition… The Grimm Brothers’ versions of Cinderella, The Frog Prince, Hansel and Gretel, Rapunzel, Sleeping Beauty, and Snow White became household classics a half century before any Disney animator had put pen to paper. 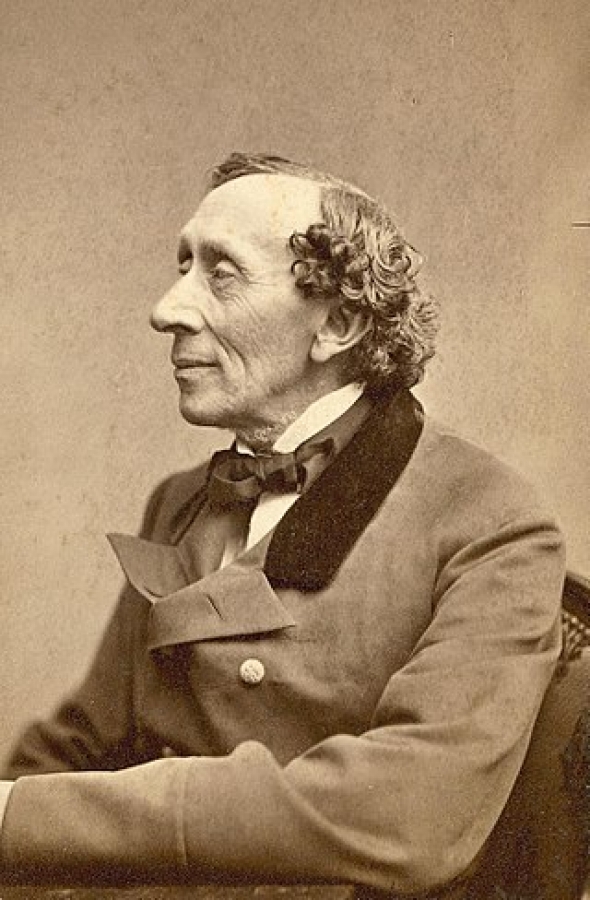 Altogether, though, there may be no original storyteller whose works have shaped Disney animation (and by extension, the entire Walt Disney Company) than Hans Christian Andersen. Born almost exactly one hundred years before Walt, Andersen was a prolific Dutch writer active throughout the 19th century. Of the (literally) thousands of works he published, each was renowned for being readily accessible to children while also presenting tales of virtue, resilience, and diversity that appealed to adult readers as well. 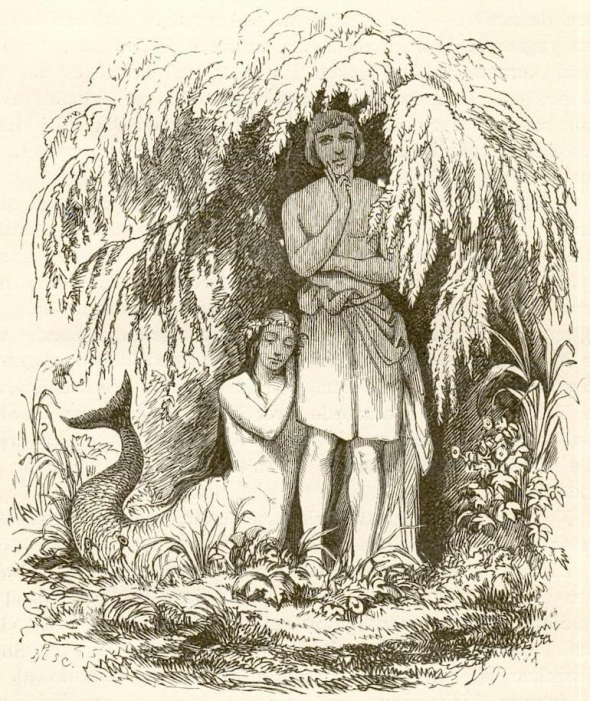 Perhaps that malleable, universal appeal is what led to his stories – including The Emperor’s New Clothes, The Ugly Duckling, Thumbelina, The Little Match Girl, The Steadfast Tin Soldier, The Princess and the Pea, and The Little Mermaid becoming well and truly timeless... and each earning a definitive animated adaptation in the century-and-a-half following their respective publications.

But of great importance today is another one of Andersen’s other widely recognized tales. 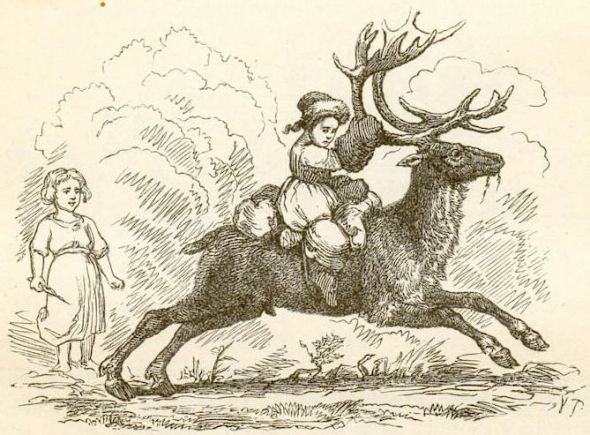 First published in 1845, The Snow Queen was one of Andersen’s longest and most highly acclaimed fairy tales. Like many of his best works, it’s a story of a young girl’s journey.

In this case, it follows Gerda in a quest to find the icy palace of the mysterious Snow Queen in the northern permafrost where her best friend Kai has been taken. Kai, for his part, has been infected with shards of a magic mirror crafted by the devil whose shattered pieces – no larger than a grain of sand – enter through human eyes and distort the world, making it dark and cold, eventually freezing their hearts solid. 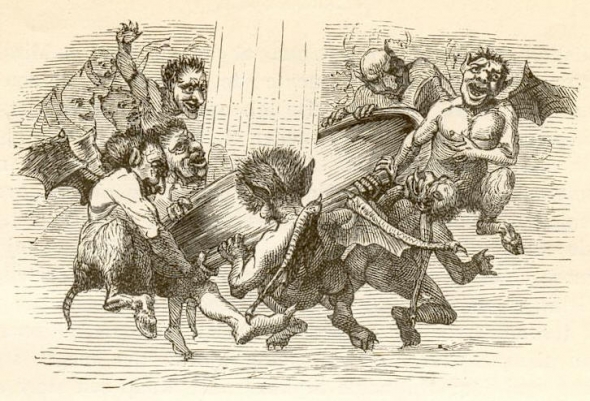 Meanwhile, the Snow Queen – an admittedly hands-off, passive, not-quite-villain – simply kisses Kai to remove all memory of Gerda from his mind and leaves him in her frozen castle to play with shards of ice as she takes off for destinations unknown. She's beautiful, hypnotic, and largely, gone.

Spoiler alert, but Gerda does reach the ice palace. The Snow Queen is no where to be seen, and a few warm tears from Gerda melt Kai’s icy heart. The duo return to their town in celebration, happy to see that winter is over at last. The icy Snow Queen is simply never heard from again... largely absent from the story named after her. 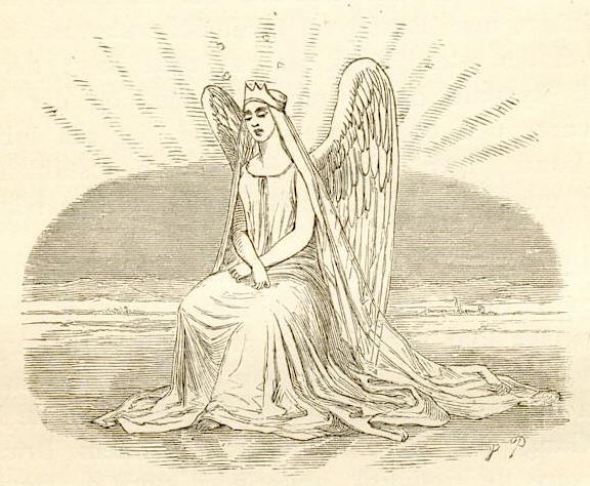 As early as 1940, Walt was in talks with Sam Goldwyn (whose Goldwyn Productions would eventually provide the “G” in MGM) to collaborate on a Hans Christian Andersen biopic. To Walt’s thinking, Goldwyn’s studio would shoot live-action sequences of Andersen’s life interspersed with Disney-animated sequences of The Little Mermaid, The Red Shoes, The Steadfast Tin Soldier, and Thumbelina along the way, culminating in an animated retelling of The Snow Queen.

Already, you can imagine the beautiful way Disney animators could’ve brought the tale of The Snow Queen to life… a visual spectacle of dancing snow, color, and ice. The problem is, Disney couldn’t quite crack the story… No matter how they analyzed the story, the cold, quiet, brooding Snow Queen – entirely absent from the story’s finale – seemed too passive a villain in a story a touch too dark when set alongside Snow White’s happily-ever-after.

Though The Snow Queen might’ve been an enduring tale whose characters and ideas had become embedded in “best of” fairy tale collections, Disney’s storytellers had seemingly decided that the story simply didn’t fit in the confines of filmmaking. But that didn’t mean the story was useless. 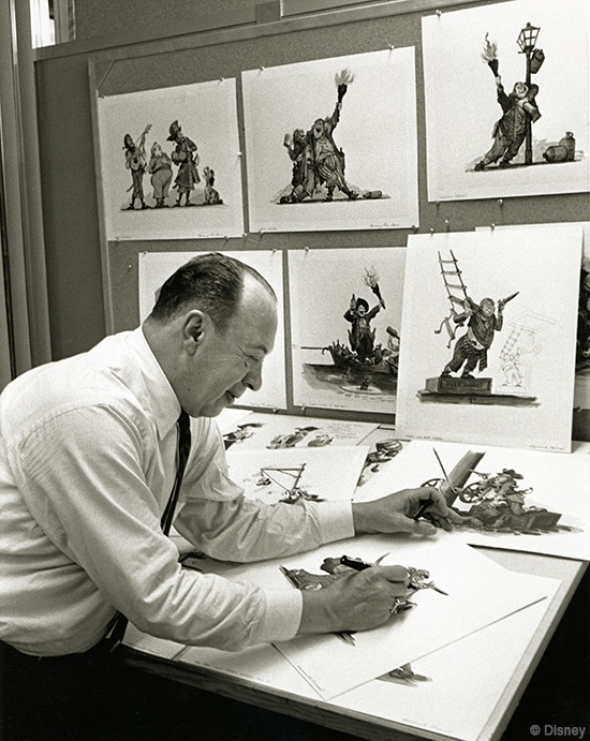 This, of course, is when we turn to Disney’s first would-be ride through the frozen Nordic world and its enigmatic designer, Marc Davis. A legendary animator, Marc is a key figure in Disney animation history thanks to his role bringing Snow White, Bambi, Cinderella, Alice, Maleficent, and Cruella da Ville to the screen. In the 1960s, he made the leap to WED Enterprises (the forerunner to Imagineering) and became one of Disney’s top designers. His signature, whimsical, comical vignettes can be seen in The Jungle Cruise, Pirates of the Caribbean, and the latter half of the Haunted Mansion, and his sing-along comic creations include The Enchanted Tiki Room, America Sings, and Country Bear Jamboree.

In the 1970s, Marc dreamed up two ideas that – to his thinking – would be the two greatest rides he would ever become involved with. 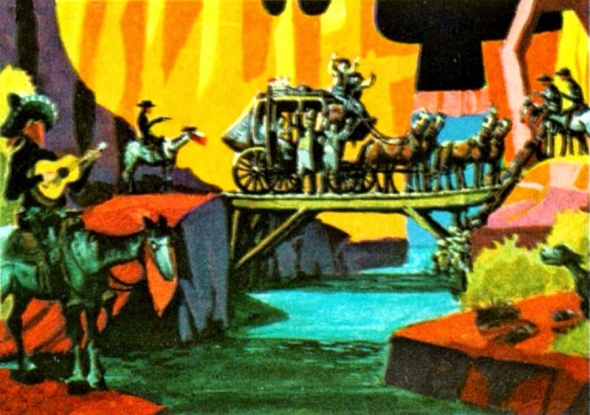 For the still-new Magic Kingdom at Walt Disney World, he created an original attraction that he believed would eclipse his own magnum opus – Pirates of the Caribbean. Trading the Caribbean seas for the American west, this unimaginable ride through the sunset-hued landscapes of cowboys and Indians would truly have been a one-of-a-kind E-Ticket adventure. We chronicled the entire story of the ride and its surprising axing in its own feature, Possibilityland: The Western River Expedition – an absolute must-read for Disney World fans. 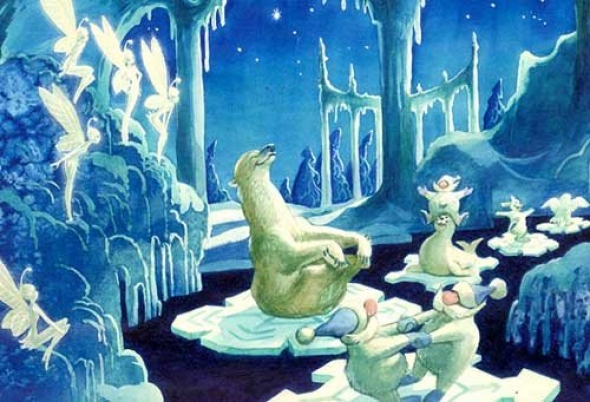 Meanwhile, back at the original Disneyland, Davis had created another new ride… but forget the fiery red Southwest… The Enchanted Snow Palace was designed as an escape from Southern Californian sunshine. Disguised as a massive, icy, glacier melting in Fantasyland (approximately where the Fantasyland Theater is today), guests would set sail down a melting river through a polar wonderland.

Musical, magnificent, and gorgeous, the ride would, of course, have included innumerable scenes in true Davis style. Sure, we’d sail past timber wolves on snow-covered hills, howling at the aurora borealis; pass playful walruses spraying us with water... 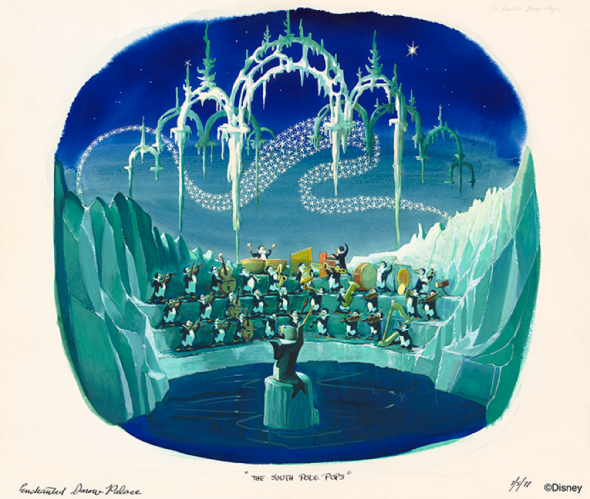 But, true to Marc Davis' comical form of perfectly-orchestrated character vignettes, we'd ride through a winter wonderland of skating polar bears and penguins… arctic animals sledding and sliding down hillsides... an orchestra of penguins directed by a seal in a tuxedo...

But eventually, the boats would sail into a fanciful ice cavern of massive snow giants with their icicle clubs, swatting lazily at Fantasia’s frost fairies… 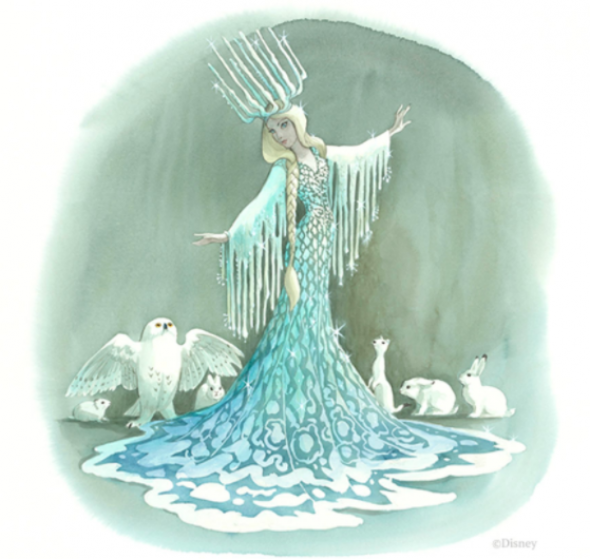 Then into an icy palace for a face-to-face encounter with the beautiful, hypnotic Snow Queen herself, who would conjure real snow to fall from the sky around us in a truly glorious finale. 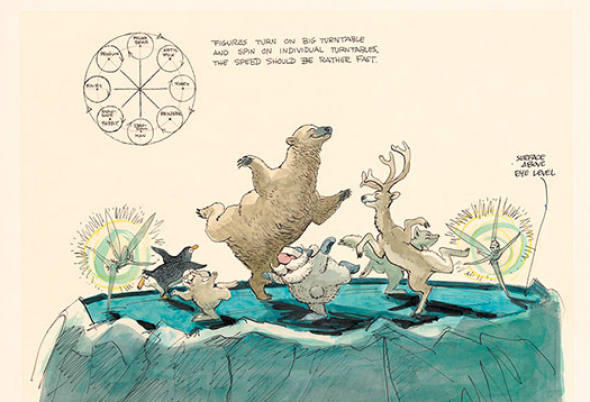 Though it would be beautiful, artistic, and (indeed) enchanting, the Enchanted Snow Palace probably wouldn’t have entered the Disney Parks canon like Pirates or Haunted Mansion could, eliciting decades of re-rides for their timelessness.

Not to mention, the 1970s had also brought about a big change at the Walt Disney Company. Without Walt, the theme parks were becoming stale. New management had determined that quick, “cheap and cheerful” thrills were the name of the game. (Which is part of the reason why Davis’ animatronic-heavy, elaborate, big budget Western River Expedition was easily beat by the more barren, thrilling Big Thunder Mountain.)

To put it another way, from its initial concept as a Disney animated film in the 1940s to its consideration as a Disneyland ride three decades later, it seemed certain that any hopes for The Snow Queen were melted… Until…

The modern marvel entries are honestly my favorite to read on this site. So much information is crammed into these articles and you truly feel like you learned something at the end. Awesome work!

1) You call H.C. Andersen a Dutch writer. This is approximately as correct as saying Walt Disney was a Nicaraguan animator and director. He's a bit of a national point of pride in Denmark, his actual home country. So change that "Dutch" to "Danish" before some Dane comes along and puts Lego pieces in your shoes while you are sleeping.

2) A minor one, but you say Maelstrom ended with a splashdown next to an oil rig in the Baltic sea. A quick glance at a map would tell you that Norway has no coastline towards that sea, and I doubt there even is oil to be found there. All the platforms are in the North Sea. A comparable mistake would be to claim Houston to be on the coast of Baja California. Not only the wrong ocean, but also the wrong country.