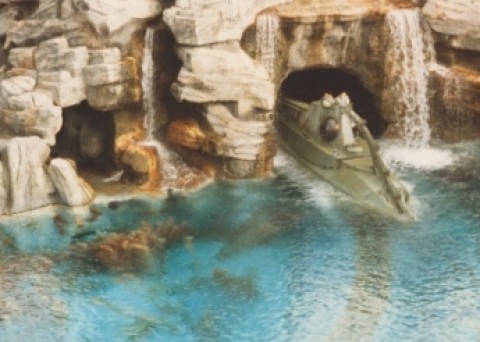 For years now, you've been part of developing our Theme Park Tourist's Lost Legends series, journeying through the revered history of long-gone, fan-favorite attractions – to the cold depths of space in the terrifying Alien Encounter, the whimsical realms of Journey into Imagination, the sleek aerial highways of the PeopleMover, the "inside" story of Epcot's queasy Body Wars, the frigid north of Maelstrom, the distant cities of tomorrow on Horizons, and so many more. All along, we’ve asked for you to record your memories and thoughts, and to tell us which of the forgotten attractions you’d like to read about next. 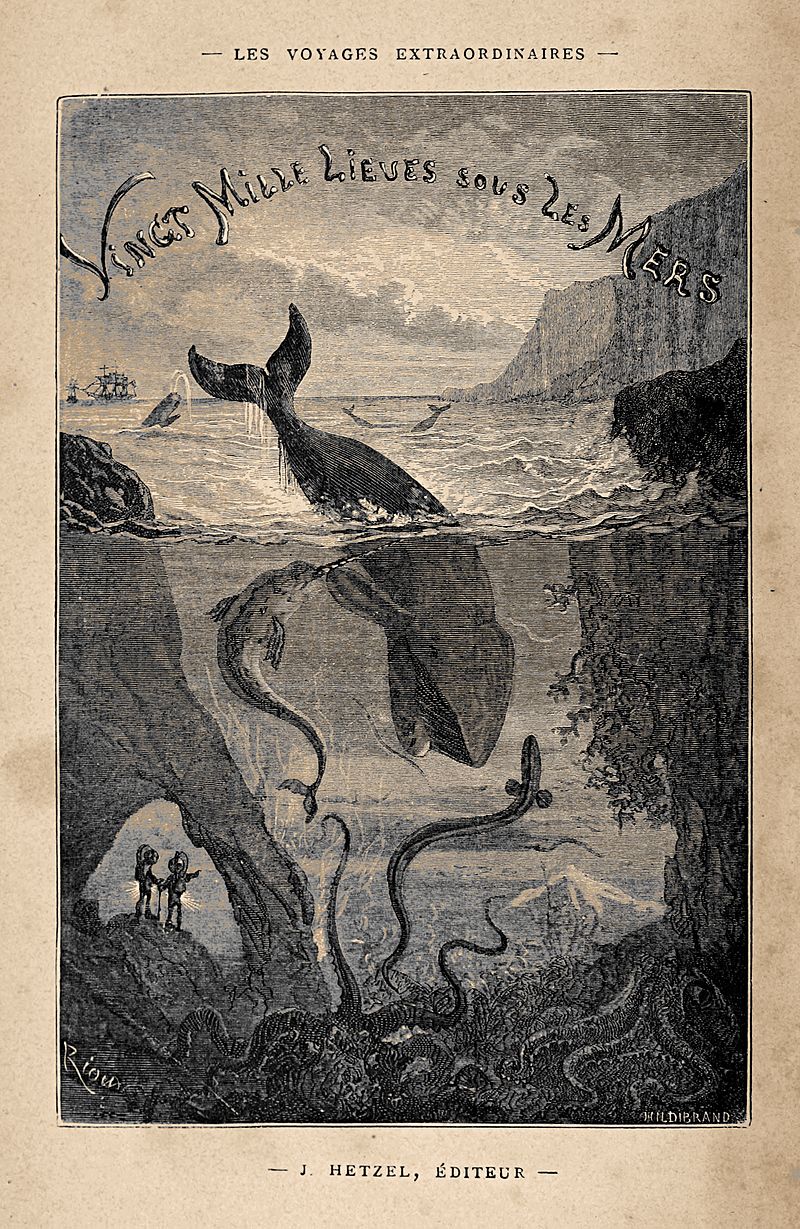 The exhaustive and extensive research Verne did before sending his protagonists to the deepest oceans or the farthest reaches of space created in the Voyages Extraordinaires an exhilarating, spell-binding series filled with adventure, romance, science, and exploration. Countless adaptations of his works have been seen in film, television, radio, story, and song… Including in one of the most elaborate films Walt Disney Productions ever created. 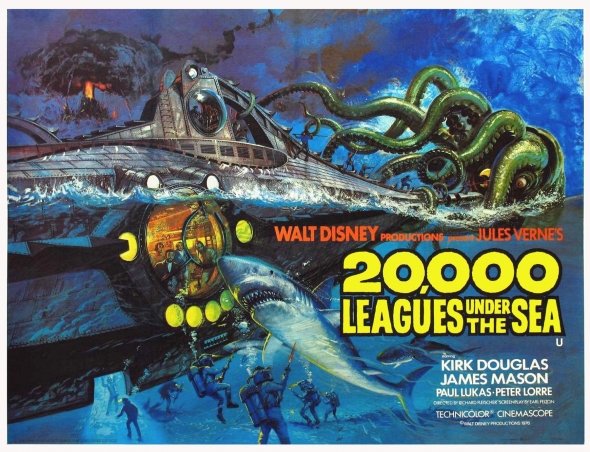 As they'd done with Cinderella, Sleeping Beauty, and Snow White, Walt Disney's storytellers had taken a universally-loved (and public domain) story and created its definitive form.

When Disneyland opened on July 17, 1955, "the happiest place on Earth" wasn't exactly ready for showtime. Given that exactly one year and a day had passed since the first shovel of dirt had been moved, some corners of Walt's park were just plain unfinished. To Walt's thinking, Tomorrowland was the worst of it. The land had fallen so far behind early on in the park's design that he'd simply decided to halt its construction altogether, determined to focus on the rest of the park first. 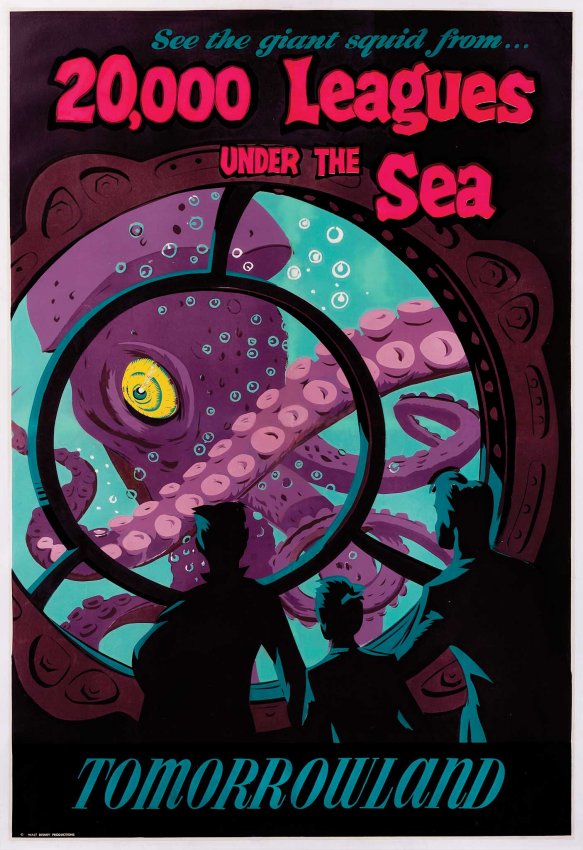 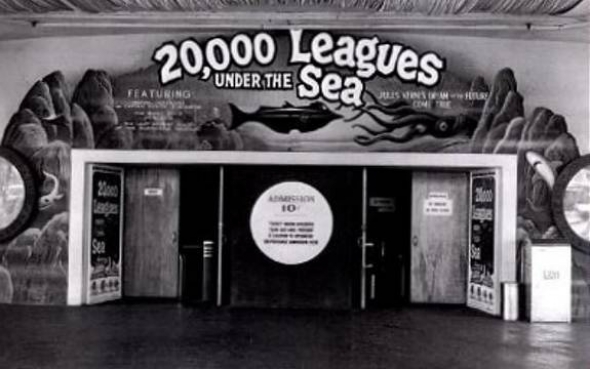 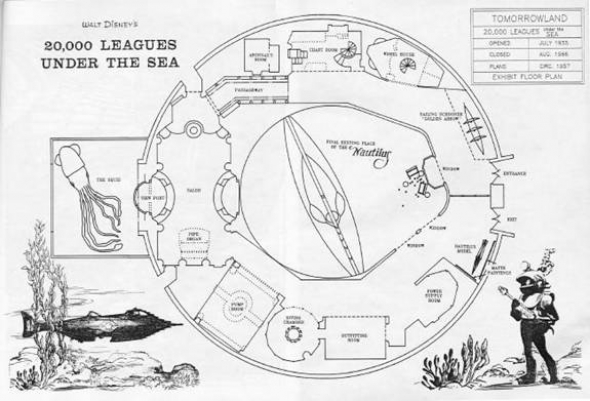 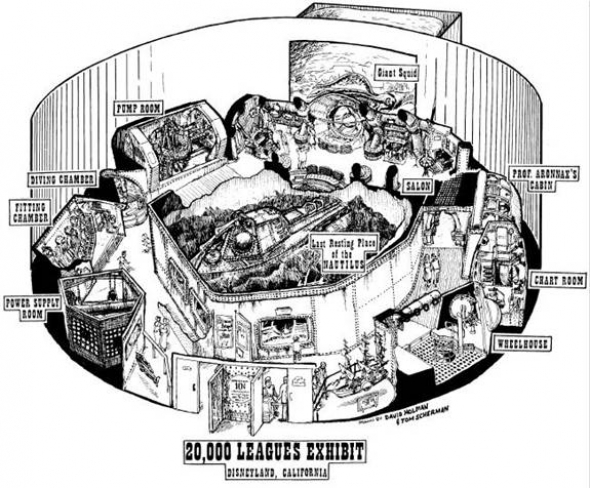 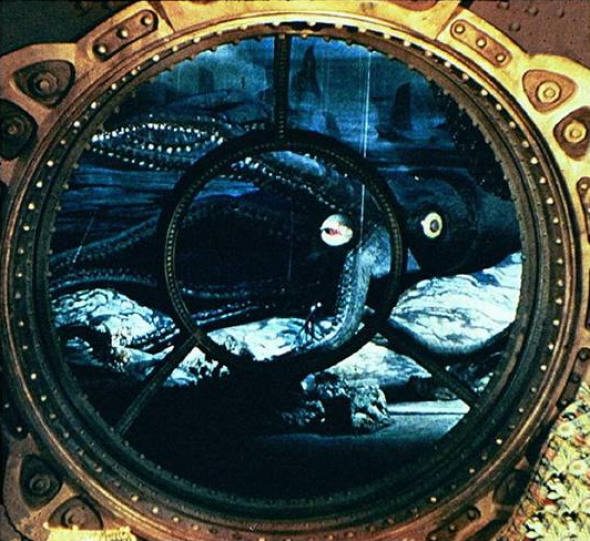 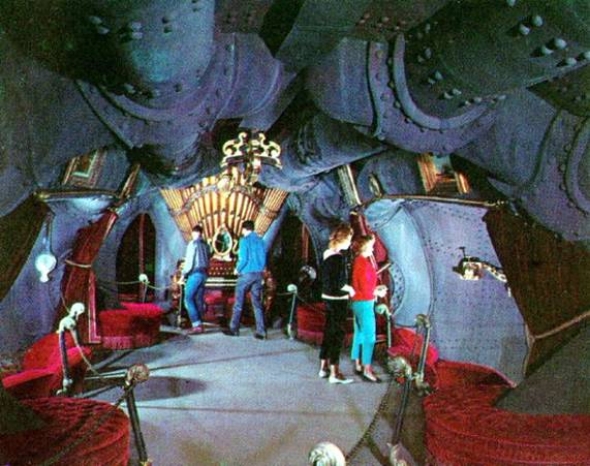 Around October 1954 a plan for Main Street was drawn and used in a press release package that showed the sets for 20,000 Leagues Under the Sea in the Opera House (current home of Great Moments With Mr. Lincoln) on Town Square of Disneyland. The Opera House was still in active use as the park's lumber mill so it did not get public access until later. I can provide a copy of the image if you can't find it.

I was a huge Disney fan before they staring doing the box office IPs on everything. I used to love how they would have ideas that were just there to be there like matterhorn bobsleds, 20k, and people mover. I grew up as this shift in the parks was happening and quickly quit going to Disney because it has lost that sense of wonder. I remember riding the people mover and seeing space mountain and the sense of curiosity and wonder. I also agree that the US parks should bring back the Imagineers Ideas of wonder back into the parks and not just the modern box office hits of some classic fairy tale that they fluffed. Prime examples the DL versions of the Pirates and Haunted Masion sparked movies. They then changed both rides to better reflect the movies and not the original ideas and wonder of the imagination. Even if they did revamp the submarine ride to Atlantis there were still so many things the movies left open where they coukd have expanded on and not just retold. If disney keeps doing massive IPs and retelling of their versions of the movie in the parks they are going to quickly hit a wall. They are already losing people because of poor management and ticket price spikes. Granted I havent been back since the revamp of Nemo, but from what I have experienced Disney is copying Universal but not expanding on the world of the IPs.

I was very fortunate and blessed to work with one of the lead imagineers on this project, Jack Gladdish, of Odessa, Florida. He shared lots of stories with me about working with Walt Disney. He also was the imagineer for Abe Lincoln in the Hall of Presidents (and the trip to NYC for the world's fair) as well as working with Julie Andrews on Mary Poppins. He told me about his nightmares after 6 months of trying to get the birds to chirp with the music. If you look closely at her dress sleeve you can see the pneumatic air lines going up her arm to the bird. It was and is nice knowing him and hearing all his stories about working with Walt. He is alive and kicking in Florida still.

I am so sorry they took this ride away before my 4 grandkids could see it. Two of them are reading the Jules Verne book. I love this ride as a child and an adult. The ocean is very much a mystery and the book is still a classic. With today's technology I don't see why Disney couldn't resurrect it.

Beautiful read. As a child this was the first & last ride of the day fire me. I was heart broken when it was gone. To never be able to share with my children. Always was always will be my favorite. May have to explore Paris & Japan.