Does the Loss of this Ride Mean the End of Epcot as We Know It? 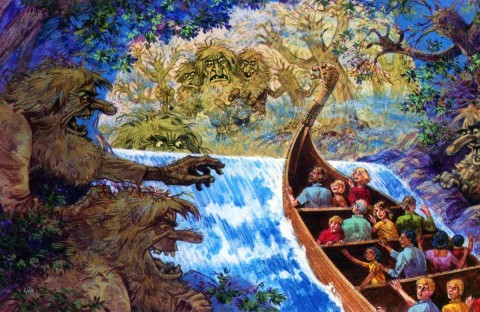 A "maelstrom" can be defined as:

It’s hard to say which is the most appropriate definition in recounting the tale of Epcot’s Maelstrom, the lost high seas adventure ride once at home in the park’s World Showcase. From its opening along with the park’s new Norway pavilion in 1988, Maelstrom was a rare addition to EPCOT Center: a thrill ride. Trolls, oil rigs, waterfalls, villages, polar bears. There’s no denying: Maelstrom was an oddity and a treasured remnant of Epcot’s earliest days.

And of course, it didn’t last.

As time marches on, beloved lost rides like Maelstrom disappear into Valhalla. And so, here we are once more: as new generations of Disney Parks fans appear, there will come a time (and sooner than you think) when Maelstrom is but a hazy memory. Young fans will have barely heard of it, and certainly won’t understand what the “big deal” was. So let’s remind them.

If you haven't already, be sure to catch up on our in-depth Lost Legends entries for other forgotten favorites like Epcot's own Journey Into Imagination, Soarin', Body Wars, and Horizons; then you can explore the detailed stories of Alien Encounter, the original Star Tours, the PeopleMover and Walt's Tomorrowland, and many more. Then, read on. In this entry to our Lost Legends series, we’ll dive headfirst into the swirling waters of this Norwegian adventure to recount its history, record the experience, and look ahead to the future. As always, we’re counting on you to add your memories and impressions to preserve Maelstrom for a new generation. 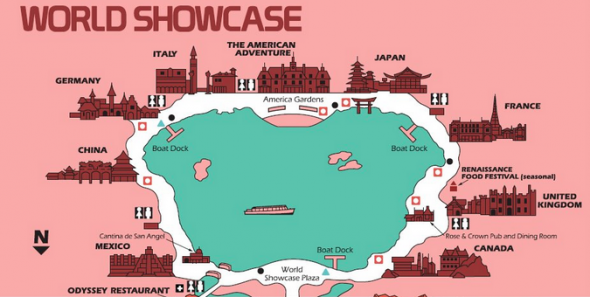 When EPCOT Center opened in 1982, its World Showcase realm featured nine pavilions dedicated to nine of the world’s nations: Canada, the United Kingdom, France, Japan, the United States, Italy, Germany, China, and Mexico. However, World Showcase has room for nineteen. That meant that, as of the park's opening, ten pavilion-sized parcels of land were empty.

Why was more half of World Showcase vacant? A large part of that was certainly purposeful, to give the park room for expansion in the future - a necessary element of foundational park planning.

But frankly, securing the pavilions wasn’t as easy as Disney had imagined. In the original plans for Epcot presented in Disney’s 1975 Annual Report, World Showcase would:

"...offer participating countries a permanent installation for such features as themed restaurants and shops, product exhibits, industrial displays, cultural presentations, a trade center, and even special facilities for business meetings.

Major sponsorships for each participating nation will be asked to provide the capital to cover the cost of designing, developing and constructing its attraction and/or ride and all exhibits, as well as the Pavilion itself. It will also have the responsibility for funding the housing for its employees in the International Village. Its land lease will cover the cost of maintaining the attraction for a minimum of ten years.

The Disney organization will be responsible for area development, including the construction of transportation systems and utilities. We will also build and operate the internal people moving system, the Courtyard of Nations and central theater facility." 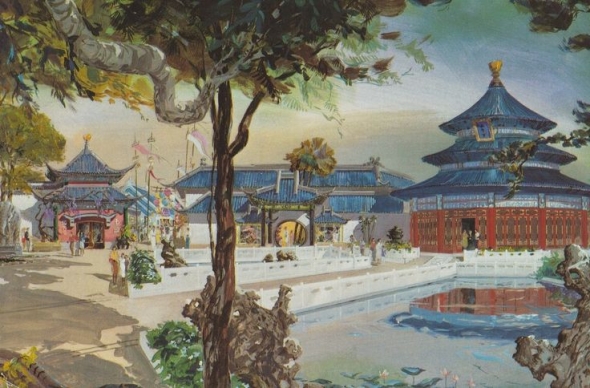 You might get the impression that Disney had signed itself up for a pretty sweet deal, and you’d be right. In the development of Epcot, Disney planned for a park that supported itself. The idea was that corporations (in Future World) and the governments of countries (in World Showcase) would be motivated to keep their park offerings up-to-date. No company would want its name broadcast across an out-of-date pavilion purporting to showcase the future, and no country would accept sub-par representation at its cultural “Epcot embassy.”

Countries would pay Disney for their representation, then again to design, develop, and construct the pavilion. Countries would even pay to house their own citizens in Florida to staff the attractions. For Disney, it would be a win-win.

When EPCOT Center opened in 1982, the model had shifted. Disney couldn’t find a single government willing to pay millions for a ten-year deal in the park; so instead, the countries of World Showcase were sponsored by private companies – the same model that had built the park’s Future World. Of course, these private companies each had close affiliations to the represented countries and an inherent interest in their portrayal to Americans. Only Morocco – added as the tenth pavilion in 1984, right between France and Japan – was directly sponsored by the government of the Kingdom of Morocco.

Even after the opening of the Morocco pavilion, Epcot had no less than nine vacant plots of land on which to develop new World Showcase countries. At the park’s opening, Israel, Spain, and Equatorial Africa were officially announced as “coming soon" (above), but they never arrived. At various points throughout Epcot’s history, some countries were heavily rumored or put into development, including Puerto Rico, Russia, Switzerland, Costa Rica, and the United Arab Emirates, but they never came about, either.

Of the nine vacant spots, one would be filled when Epcot’s eleventh (and to date, most recent) World Showcase plot became a construction zone from 1986. Located between Mexico and China, this eleventh plot was originally intended to represent the cultural region of Scandinavia (encompassing the countries of Norway, Sweden, and Denmark). However, 11 companies representing Norway alone were able to raise the over $30 million required to create an exclusive national pavilion. Disney chipped in one-third of the construction costs, and the quest to open a Norway pavilion was underway.

The ultimate goal of World Showcase – from the position of its sponsors – was to increase tourism and recognition of their represented countries. By offering authentic merchandise and real, local cuisine prepared by actual citizens, World Showcase would be a marketing wonder; like a food truck festival that leaves you hungry for more, the opportunity to sample the culture of each participating country would be a coup for sponsors in the long run.

But the best way to showcase the wonders of your country (and entice guests to visit your pavilion) was through attractions. Sure, the Canada, China, and France pavilions each had 360-degree surround-screen attractions showcasing the wonders of their respective countries through the trademarked Circlevision filming that Disney was known for. 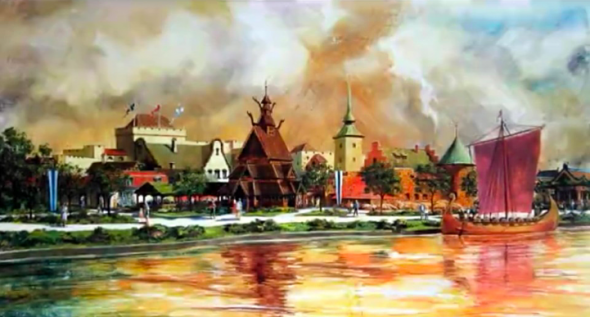 But Norway had something more planned. The ornate Scandinavian village would have its authentic craftsmen, its ornate shops, its Stave Church exhibit, and its royal banquet halls. But at the back of the cobbled streets would be something the likes of which Epcot had never seen before.

Beyond the pavilion’s main courtyard was an inconspicuous entry to a hidden gem of Epcot’s attraction line-up. On the next page, we’ll discuss the creation of Maelstrom, then go for a ride.

Would some of the same people protesting Frozen Ever After not care if the Paris Ratatouille ride was placed in Epcot? Yes. In fairness, though, that ride (and movie) are at least set in France instead of a fictional location based on France. I think DisneySea is doing the right thing by placing Frozen in a Scandinavian land instead of one specific to one country. By doing that, they can play it off as a part of their fantasy "Disney-fied" version of a region that includes Norway AND Frozen instead of trying to make Frozen part of a real country. I'm not saying the ride will be bad and I understand that Epcot probably needs the boost it will provide. But doesn't a ride based on a fantasy movie set in a fictional place belong in the Magic Kingdom?

I actually think Disney would be smart to rebrand the pavilion "Scandinavia." I understand that that's out-of-sync with the rest of the pavilions representing specific, single countries, but it's no different from the "Equatorial Africa" pavilion that was announced but never built. It would certainly help excuse the presence of Frozen. And Norway is no longer providing financial assistance, so there's no requirement that it stays Norway.

As a little kid I remember seeing the concept art on the barricade wall while it was being built. It depicted the boat going over the waterfall backwards with all the riders. I remember it being a lot more frightening than the picture that is in the article. I was terrified of it when I first rode it because I thought the ride would be just like the picture showed.

I have been to Epcot 4 times and only as an adult/parent. I discovered Marlstrom by accident, but it was a happy accident. My first emotion at finding the ride was elation, as there are so few in Epcot, and waiting in line I kept looking at my husband and saying "this looks mighty different from home" (we are passholders for Disneyland CA).

My first thought after the ride was that everyone in Norway was on drugs. It was seriously the weirdest ride I had ever been on. But I loved it! Our last visit to Epcot was with another family in 2012, and I had talked up the ride so much they thought a) it can't POSSIBLY be as weird as I had made it out to be, and b) they couldn't WAIT to ride it.

I loved your article as I was so sad to hear the ride was closing. It truly was an oddity for Disney, but a quirky and welcome one. In addition, you validated all my thoughts and feelings on the ride!!!!!

Please do one of these articles on Adventure Through Inner Space!!!

I am thoroughly enjoying your lost attractions series. Maelstrom is the only one of these I was able to experience. On the trips when my family visited Epcot, we inevitably spent the majority of the day in Future World, racing over to the World Showcase to try to do everything (which wasn't a whole lot) before the park closed. I remember being amazed at Maelstrom and I considered it on par with Pirates of the Caribbean. Even though I knew we weren't going to fall backwards down a waterfall, it really felt as if we could go over any minute. Maelstrom was a valuable addition to the World Showcase, which is dominated by shops and movies, which aren't huge pulls. While I'm sure the coming Frozen ride will boost Epcot's attendance, Maelstrom was a great dark ride and I'll miss it on future trips.