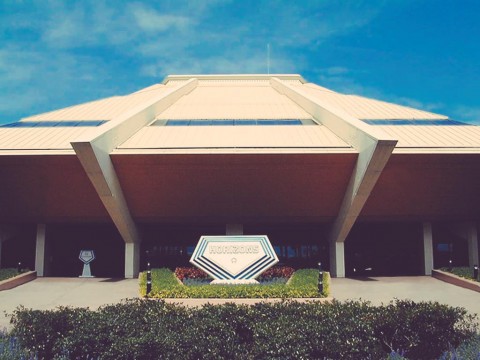 Since Disneyland first opened in 1955, Disney Parks have been practically obsessed with predicting the future… and more often than not, they’ve gotten it surprisingly right. The idea of lifting the curtain of time and exploring innovation and invention has been a driving force behind the Parks, as evidenced by Walt’s dedication of Tomorrowland in 1955: “A vista into a world of wondrous ideas, signifying Man's achievements... A step into the future, with predictions of constructed things to come. Tomorrow offers new frontiers in science, adventure and ideals. The Atomic Age, the challenge of Outer Space and the hope for a peaceful, unified world.”

Through Tomorrowland, Disney accurately envisioned (and perhaps inadvertantly shaped) the look and feel of the Space Age. As tomorrow leapt forward, so did Walt’s vision, always retaining an optimistic and bright sense of unity. Eventually, though, the idea of showcasing actual scientific innovation became too daunting a task for designers constantly faced with progress moving too quickly.

But Tomorrowland wouldn’t be Disney’s last attempt at imagining how society, enterprise, culture, and life might look in the distant future. Enter Horizons – one of the most cherished, beloved, and celebrated rides ever created by Disney’s Imagineers. This classic dark ride whisked guests away from today and into that vista of wondrous ideas, transporting them into the future they most wanted to see.

Our in-depth Lost Legends seek to tell the full, behind-the-scenes stories of forgotten classics before their tales are lost to time. We've looked back on the complete histories of Mr. Toad's Wild Ride, the original Star Tours, TOMB RAIDER: The Ride, Adventure Thru Inner Space, 20,000 Leagues Under the Sea, and so many more. And yet again, we’re calling on you to comment and share your memories to preserve one of Disney's greatest masterpieces ever for future generations who might one day wonder, “What was the big deal?” So off we go to the twenty-first century to bring Horizons back to life...

For more than a century, World's Fairs have been landmark cultural events on Earth. At these international expositions, countries and corporations from around the world come together in celebration, showcasing their newest innovations. Take, for example, 1889's Exposition Universelle in Paris (with the Eiffel Tower built as its central icon), 1915's Panama-Pacific International Exposition in San Francisco (with its icon – The Palace of Fine Arts) or 1962's Century 21 Exposition (hosted in Seattle, with the Space Needle commissioned as its icon).

At these global celebrations, corporations and countries would build stunning, massive pavilions in which they could show off their newest advances to the eager public, who would show up in droves to see the technologies that would soon be in their own homes, roads, schools, and workplaces.

And of course, World's Fairs are of tremendous importance to Disney fans, too. In particular, the 1964-65 New York World's Fair is remembered as the birthplace of a number of Imagineering innovations. In fact, the State of Illinois, Pepsi-Cola, Ford Motors, and General Electric had each requested that Disney develop an attraction for their pavilions. At the close of the Fair, the resulting attractions were each transported back to Disneyland as Great Moments with Mr. Lincoln, "it's a small world," the Lost Legend: The Peoplemover, and finally, an attraction Walt called his very favorite... 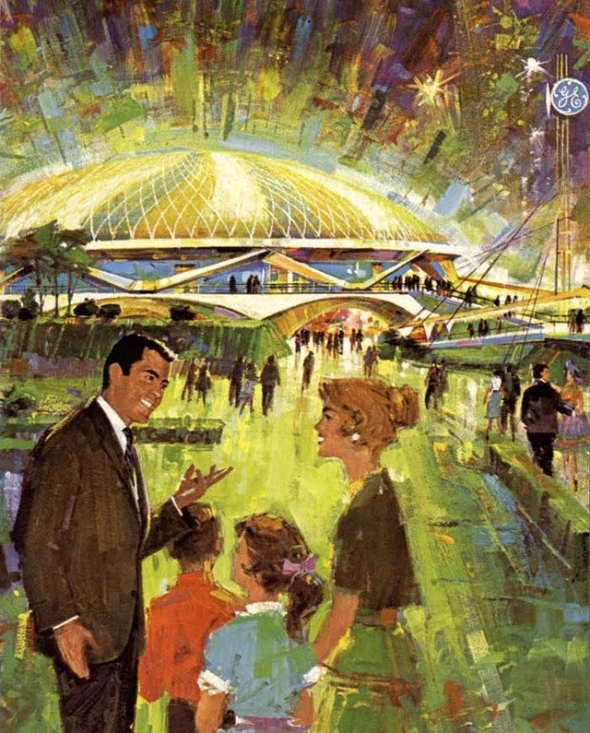 The headliner of General Electric's pavilion at the 1964-65 New York World's Fair was Progressland: A Walt Disney Presentation. This revolving theater show was meant to follow the hopes and fears encountered by one American family as technology and electricity became increasingly prevalent in American homes. Beginning in 1900, guests would meet John and his wife Sarah, as well as their children Patricia and James, first in the year 1900.

Then, to the tune of the Sherman Brothers’ “There’s a Great Big Beautiful Tomorrow,” an outer ring of theaters in which the audiences sit would rotate around a core of stages, jumping forward in time to the 1920s; then 1940s; and finally, "today" (the 1960s!), with the family catching guests up on the easy-living innovations of General Electric at each step along the way. The show’s message of optimism and change thanks to electricity was perfect for GE and earned them praise at the Expo.

When the World's Fair ended, the attraction was shipped to Disneyland just in time for the park's 1967 New Tomorrowland where it opened under a new name as the Modern Marvel: Carousel of Progress. That will become an important element in the story to come... But with the World's Fair finished, Walt and his team were moving on. The technological advancements they'd been able to make thanks to Ford, Pepsi, and GE footing the bill had propelled Walt even further down a path he'd always been interested in... And he was ready to start buying land.

EPCOT – a vista of wondrous ideas 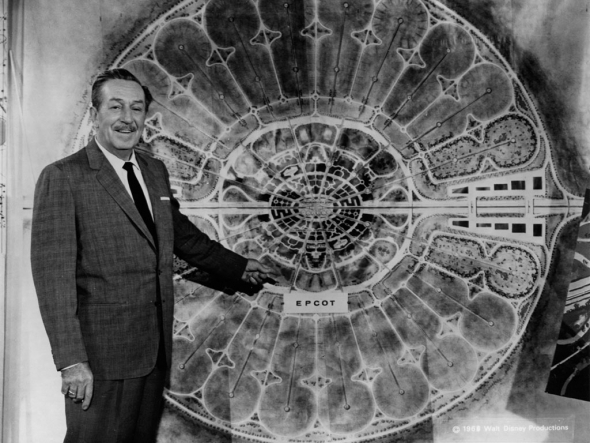 Though he's often remembered today as a storyteller, artist, and animator, Walt Disney's closest friends say that he was one thing above all else: an optimist. In fact, we know Walt's infatuation with futurism, and saw it play out in each career move he made. Disneyland, for example, was his playground for experimenting with urban design and transportation solutions. The New Tomorrowland he heralded at the height of the Space Age, for example, was a "World on the Move," alight with the kinetic energy of gliding Monorails, mass-transit Peoplemovers, churning subs, and soaring rockets.

But everything that had come before was merely a prototype. Walt's "Florida Project" was where he envisioned applying all that Disneyland had merely previewed. The Experimental Prototype Community of Tomorrow he planned to build would be a living city, master-planned for efficiency and convenience. From its central hub of stores, restaurants, and hotels, the city's Peoplemovers would be propelled outward like arteries, carrying residents to suburban cul-de-sacs where homes would be subject to continuous updates by American corporations. EPCOT would be an ever-evolving showcase meant to be a living blueprint for all modern cities to come after. 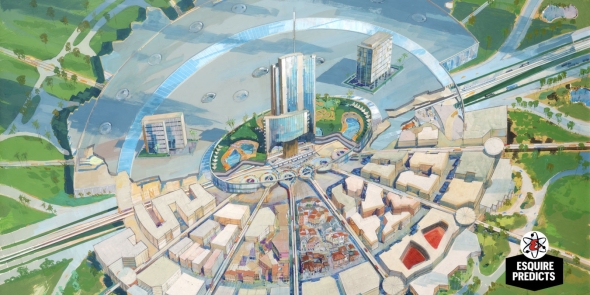 EPCOT will take its cue from the new ideas and new technologies that are now emerging from the creative centers of American industry. It will be a community of tomorrow that will never be completed, but will always be introducing, and testing, and demonstrating new materials and new systems. And EPCOT will always be a showcase to the world of the ingenuity and imagination of American free enterprise.

Friends say that, as Walt was lying in his hospital bed, dying of lung cancer, he would look up at the tiles on the ceiling, using them as a grid to explain the layout of the city he saw in his head. Unfortunately, after Walt's death in 1966, plans for EPCOT were shelved. Instead, the new "Walt Disney World" that opened in 1971 would become a recreation resort anchored not by a city, but by Magic Kingdom.

By the late 1970s, though, Walt Disney World was ready for growth in the form of an unprecedented second theme park on the property. At that time, then-CEO Card Walker began to toy with the idea of incorporating the essential ideals and core values of Walt's EPCOT – industry, optimism, and futurism – with the tried-and-true concept of a permanent World's Fair in Orlando. And it would be Disney's most fascinating experiment ever. Read on...

As a Hispanic person, that mural makes makes me so happy seeing other POC and their cultural iconography being represented in that mural. It´s like saying that I have a place in this future, too. While Horizons´ view of the future was a little too optimistic, it is certainly fun to dream about.

I never bought the whole GE pulling out reason. I'm to believe that they wouldn't pay for a refurb of a beloved attraction but would instead pay to demolish and then build a brand new attraction? I'm pretty sure the new attraction is way more expensive.

What's missed here is that a lot of the buildings in Epcot were basically copies of pavilions at Canada's Expo '67. The main spherical building was the USA pavilion for example. And the idea of the Expo going on as a living community was what Habitat '67 was all about (it was a section of Expo '67).

There also used to be an "Adult" section of Disney World that was basically a copy of Granville Island in Vancouver, BC.

I loved HORIZONS, both because I'm a science fiction fan and because of the innovative ideas ( the sideways sightlines, the moving movie screen, the "SKype" videos linking the later scenes, the "choose your ending". But it looks like I'm out of date. I once heard a tour guide advise people to go on Test Track because it's "exciting" and the dark rides aren't.

Permit me a little rant. I've gone to Epcot for 2 decades, and Future World keeps getting more and more disappointing. Technology displays are constantly being replaced by Disney commercials. ( Maelstrom => Frozen, the Ocean pavilion => a kid's movie about a fish). The gardens at the entrance replaced by those big tombstones. Songs about the future replaced by nostalgic songs from the 50s -- (fortunately they switched that back). And now my health isn't up to long walks, so I've stopped going altogether.

I started going to EPCOT at age 14, the year it opened in 1982 and was fascinated. I was hooked and never wanted to leave. I could not get enough! It was and still is my favorite park however, in recent years, after a hiatus from Disney I was so sadly disappointed to discover that my kids will never know the EPCOT I grew up with. I was so grateful my daughter actually got to go on the Universe of Energy ride last year (2016) before it closed! That was the last remnant (albeit slightly different with Ellen), of the original EPCOT Center that was so dear to me. Shame on our society for being so dumb that innovation and education does not appeal to them anymore.