Horizons closed December 1994, a year after GE's sponsorship expired. In an era before social media (and one where many of Disney's classics were falling), no one seemed entirely sure what would become of Horizons. The pavilion sat silently for one full year... until it surprisingly re-opened in December 1995.

Why? Epcot – already infamously short on actual rides – had seen its capacity reduced even further by the closure of two fellow classics. The Lost Legend: World of Motion had been shuttered to begin construction on TEST TRACK, while the Lost Legend: Universe of Energy was being retrofitted with Ellen Degeneres, Bill Nye, and Alex Trebek to become Ellen's Energy Adventure. With precious few rides left in the park, Horizons was taken out of the mothballs to up the park's lineup in the meantime.

Given that the original version of Test Track missed its opening by several years due to technical delays, Horizons lasted three more years as a placeholder. Once Test Track finally opened in 1999, Horizons was closed for good: January 9, 1999.

A popular urban legend alleges that a large marshland sinkhole near the structure had weakened it to the point of near-collapse, necessitated major infrastructural work on Disney's part. Altogether, fans understand this as a convenient excuse. Famed Imagineer Marty Sklar did verify the existence of a large sinkhole in that corner of the park, but never insinuated that it was particularly to blame for Horizon's demise. Rather, Imagineers hinted that it was much closer to World Showcases' long-closed Odyssey Restaurant. 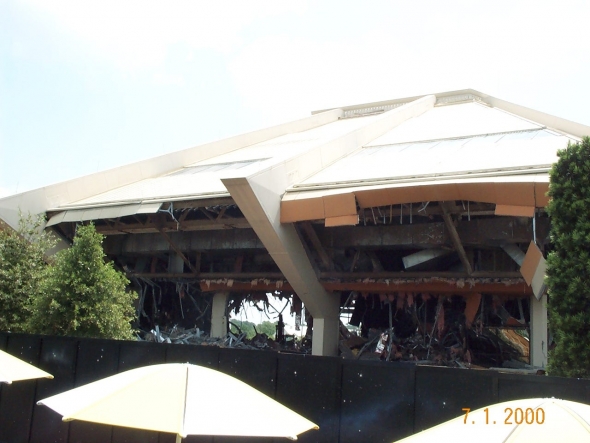 More than likely, the sinkhole was a convenient story cooked up by fans that made more sense than the truth: with GE's sponsorship and financial investment gone, Disney would have to pay out of its own pocket to modernize Horizons – something that the company was unwilling to undertake in a post-Disneyland-Paris, pre-California-Adventure economy.

The structure stood, frozen in time, for sixteen months after its final closure. Horizons was finally demolished in July 2000 with construction beginning on the thrill ride simulator Mission: SPACE which would take its place by 2003.

It’s never easy to say goodbye to an attraction – especially one being removed for being “obsolete.” However, the loss of Horizons rippled through the fan community (particularly those who had supported and grown up alongside Epcot) and shifted the perception of what Disney was capable of. Here are three very simple reasons that the loss of Horizons cut Disney fans deeply.

1. It was a masterful dark ride in the classic EPCOT Center tradition

No one does dark rides like Disney. From the early Fantasyland classics of cut-outs and blacklight of the 1950s, to the sensational, artistic, atmospheric anchors of the '60s like Haunted Mansion, Pirates of the Caribbean, and the (EPCOT precursor) Lost Legend: Adventure Thru Inner Space.

In 1982, it must've felt like it was all leading up to EPCOT Center. It's there that Imagineers seemed to master the medium, producing a lineup of attractions that remains legendary to this day... the Lost Legends: The Living Seas, World of Motion, Journey into Imagination, Universe of Energy, Body Wars, and Kitchen Kabaret. Epic in both concept and execution, these attractions dared to do away with princesses and pirates. As Imagineer Tony Baxter described, Magic Kingdom made fantasy real, but EPCOT Center made reality fantastical.

Each and every loss of EPCOT Center's lineup was a blow to Imagineering fans who were inspired by Future World at any age; a slow, hair-by-hair removal of a Band-Aid, piecemeal removing the masterpiece rides Disney's legendary designers envisioned. And reimagining or even replacing classics is inevitable... but the fall of Future World was all-encompassing, and, unfortunately, not for something better. Which brings us to...

2. It's a classic case of a replacement not worth the loss

For fans, Disney Parks are immensely emotional places. Our Lost Legends collection is filled with some of the most-read features on Theme Park Tourist, and for good reason! The attractions developed by Disney Imagineers develop cult followings because they're art; they're visual, emotional, transformational experiences for those who grow up alongside them. It's also the reason why fans can feel immense connections to attractions they never even saw in person!

And then, they're gone. In the name of progress, technology, expansion, or pop culture, even treasured favorites disappear, often to be replaced with something newer, fresher, or more relevant. The problem is that if there's one thing Disney Parks fans do well, it's hold a grudge. So especially if fans deem that a replacement attraction wasn't worth the loss of an original, the "community" can turn against it, souring reviews, perceptions, and ridership. Such is certainly the case with Mission: SPACE, an ambitious (but brainless) thrill ride meant to usher in a new identity for Epcot as Walt Disney World's park of technological thrill rides.

The problem with closing a classic is that its replacement will always draw comparisons; and for Disney Parks fans, the rose-colored glasses of hindsight often mean that no replacement is truly worth the loss... but certainly, the piecemeal, disconnected '90s and early-2000s additions to Epcot weren't. Maybe because they inherently lacked what Horizons had... Connection.

When Future World premiered in 1982, it wasn't just that its pavilions each contained monumental dark rides willing to tackle massive topics in science and industry; it's that those pavilions were ultimately connected. Like earning badges, visiting each pavilion and riding its respective dark ride gave you one piece of the story of our collective future; Horizons was the keystone that brought them together. When Horizons closed, it was the undeniable end of Future World's thoughtful, intentional, and intellectual mission.

It's likely that most guests to Epcot today don't recognize or mind that Future World's pavilions have diverted from their interconnected origins; that Finding Nemo and Guardians of the Galaxy sit, mis-matched, among '80s originals, which are neighbors with 21st century thrill rides. But for fans, that connectivity; the "big idea;" the all-at-once master-planned design and development; the embedded narrative were what made the EPCOT Center concept so powerful.

And in fact, Epcot's epic transformation (beginning in earnest in 2020) will begin to draw those connections once again, even visually reintroducing new iconography for Future World. But are these new icons a gilded shell when placed upon pavilions that don't have anything cumulative to say? And without a "Horizons" to bring it all together, would a message land, anyway?

Does Epcot 2020+ have a purpose? A mission statement? A story to tell? Without Horizons, it's hard to imagine.

The mural above is entitled "The Prologue and the Promise," by Bob McCall. Perhaps the most beautiful mural ever commissioned for a theme park attraction (of which Epcot alone has plenty), the mural depicts the flow of civilized man from the past and present toward the future. Originally located along the exit of Horizons, the mural seems to encapsulate (perhaps accidentally) the entire concept of Epcot - even though we all come from different places and have different customs, beliefs, and traditions, we're all looking for the same thing. Together, the promise of tomorrow is assured.

Walt Disney’s dedication for Disneyland called on it to be a place where “age relives fond memories of the past,” and where “youth may savor the challenge and promise of the future.” Horizons would’ve made him proud.

If you enjoyed our in-depth journey to the 21st century, be sure to visit our Legend Library and set course for another Lost Legend. As always, we encourage you to recall details and stories of Horizons in the comments below and on social media so we can preserve this ride for future generations.

I enjoyed reading this article. As one who frequented Horizons in the late 80's and early 90's, I was sad to see it go. I am old enough to have visited the 64-65 NY Worlds Fair and the old Future World brought back those childhood memories. Horizons represented the optimistic view of the future that is largely gone from Walt Disney World now.

I do have one question however. The sinkhole theory has been largely debunked, including comments made by Marty Sklar.

Do you have a verifiable source and documentation for raising it here, otherwise it is concerning to be included in this article, as it prolongs the rumor's life.

The existence of the sinkhole in that area of the park was confirmed by Mr. Sklar about three years ago, though not necessarily that it was the reason for Horizon's demise. I've always been unlikely to believe it myself, since the ride re-opened and closed and re-opened far too many times for a structure that was allegedly on the verge of collapse. I'll be sure to edit the article to note that. Great point. Altogether, I think the sinkhole simply made for a convenient excuse.

Marty confirmed the existence of a sinkhole at Epcot's 30th anniversary celebration (WDW's 40th), but at a location near the Odyssey Restaurant building as the primary reason why there was so much space between Future World and the World Showcase.

He is widely quoted in various blogs that were present on that point and is quoted as debunking the Horizons connection, instead pointing to the loss of corporate sponsorship as the primary reason for its loss.

I appreciate your reply and edits.

Thank you for this. I am choked up reading through everything. I was probably about 5 or 6 when I rode this ride. It was a "must-do" for my family and I. I remember my 2 older brothers and I sharing one ride vehicle while my parents rode in another. I remember fighting over when scene would win at the conclusion of the ride. I remember staring at the different scenes, wishing I could jump out of my ride vehicle and explore (and thanks to Mesa Verde Times blog, that dream became a little reality, at least vicariously). I remember dreaming about what the future would be like. This ride, and many of the original Epcot rides, held a special place in my heart. MK filled the childish imaginary fantasies for me. Epcot allowed me to dream and imagine. As an adult, I ride Carousel of Progress and Spaceship Earth because they are the last of the good, thoughtful rides left. I mourn Horizons when I look upon Mission:Space and have yet, if I ever, to step foot in that building. I help my fellow Horizons community hold on to the last of the ride we loved by creating trinkets with the Horizons logo, because sadly, there aren't many souvenirs for the ride anymore. I do it all out of love for this ride, out of the memory of what it unlocked inside me as a child.

The sinkhole story is a myth, nothing more. Plans to modernize Horizons and refurbish the pavilion are confirmed to exist.

Mission:Space is what HP wanted and paid for, so that is what was built.