By time EPCOT Center made its debut in 1982, the idea of a permanent World's Fair celebrating industry and innovation was set in stone. In fact, one of the park's two "realms," Future World, had been populated by eight massive, monumental pavilions. And just like at a real World's Fair, each was sponsored by a corporation whose message and product could be highlighted within.

But brilliantly, Future World's pavilions were master-planned by Disney, each relating to an area of science and industry. There was Spaceship Earth (communication), Communicore (innovation), The Seas (oceans), The Land (agriculture), Imagination (creativity), World of Motion (transportation), and Universe of Energy (energy resources). 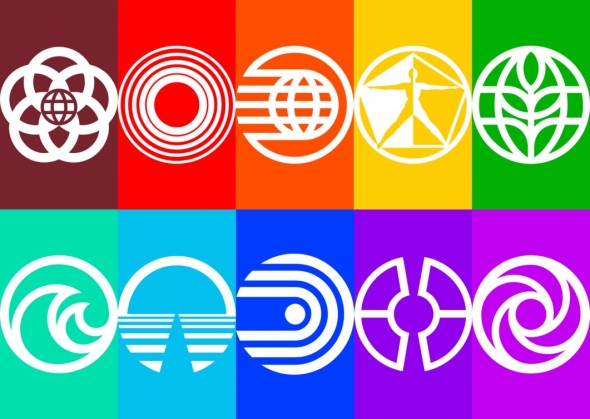 It's no coincidence that each of EPCOT Center's Future World pavilions was represented by a simple, circular icon. The visual language of Future World was meant to imply that the pavilions of Future World were all connected; each containing a piece of a message... and they were. And in fact, one pavilion demonstrated the interconnectivity of communication, technology, seas, land, creativity, transportation, and energy.

To bring it to life, Disney would partner with an old friend: General Electric, the long-time sponsor of the Carousel of Progress. 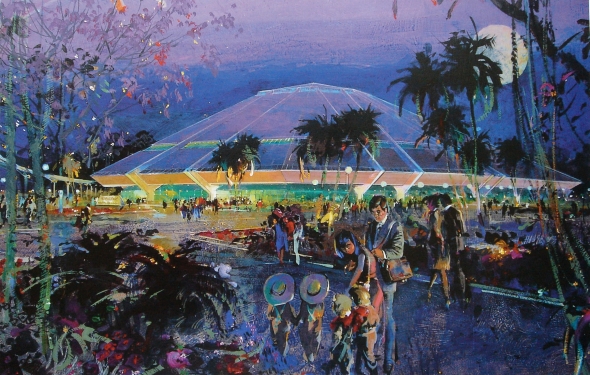 As with any sponsorship agreement at EPCOT Center, General Electric's voice was essential in the concept development for the attraction inside Horizons. Reginald Jones (then-CEO of GE) and his soon-to-be-successor Jack Welch envisioned a ride that focused on Thomas Edison (founder of GE!) and how his invention of the electric light bulb led to the modern company. Disney Imagineers counteroffered that the attraction would need to more generally discuss the future of America before expanding to the larger future of the entire world... dropping the connection to electricity entirely.

But one thing GE and Disney did agree on was something spectacular. Imagineers wanted the attraction and its celebrational look at the world ahead to feature some familiar faces. The attraction would be the "spiritual sequel" to the Carousel of Progress itself. After all, Carousel of Progress traced how innovation improved the lives of John, Sarah, and their children through the 20th century. Now, this epic new attraction would continue their story, following the same family through the 21st century, to see how life changed at the crossroads of Future World's topics. 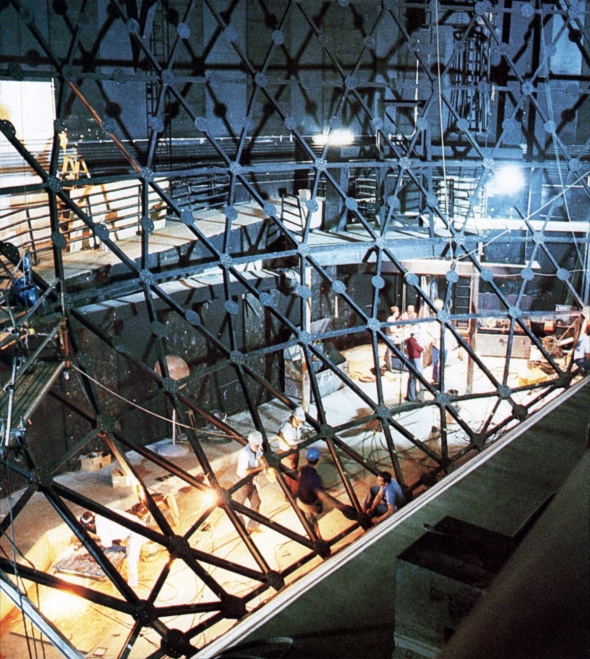 The pavilion itself would be one of Epcot’s most unique. The golden exterior was meant to resemble a spacecraft, with its elaborate and dramatic angles emphasizing its three dimensionality (compared to many other Epcot pavilions, designed with a more “flat," silhouette-focused perspective) with the roof creating a distant horizon line in perspective. Its enormous atrium would also provide enough room to contruct something unique: an IMAX-created, curved "Omnimax" domed screen (which had debuted less than a decade earlier in San Diego) tilted on its side to create an immersive projection surface...

A last minute budget cut reduced the ride’s budget by $10 million, shrinking the size of the physical building by a scaled 35%, shortening the planned ride length by 600 feet. However, the building was still massive, with 137,000 square feet of space between two floors. The ride inside was an overhead Omnimover, similar to the Haunted Mansion or Spaceship Earth, but suspended from the ceiling like Peter Pan's Flight. Those cars whisked along 1,346 feet of track during a 15 minute dark ride experience. Designed by Marty Sklar, John Hench, and dozens of other names familiar to Imagineering fans, Horizons would be a masterpiece for Epcot.

The working name for the pavilion was Century III, a reference to society’s entry into the third century of American history (1976 – 2076). The name was considered too abstract for international guests, briefly changing the working name to Futureprobe (until the medical connotation dissuaded its use). If this very special pavilion were to zoom "out" from EPCOT Center's specific industry-focused pavilions and explore the future of mankind, it needed an optimistic and ambitious name. Finally, GE and Disney settled on Horizons.

The future is now 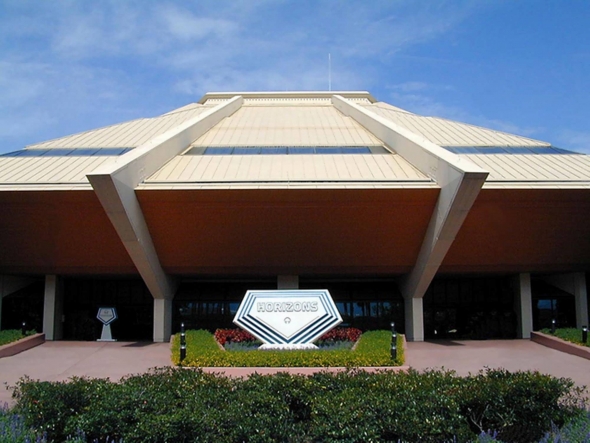 Horizons opened on October 1, 1983 (the park’s first birthday). The Omnimover ride through the future was immediately a fan favorite and inspired a new generation. Horizons established a very clear vision of what the future as seen from 1983 might look like, and it’s a vision that’s been carried on by those who saw the ride back then.

So what awaited inside the stunning golden pavilion that brought all of EPCOT's themes together? Read on, as we step on board and explore the horizons of civilization....

As a jaded 12 year old visiting EPCOT for the first time, this ride was one of the few that I absolutely ADORED. I was crushed when I returned only a couple years later and found out it had closed. Thank you for the walk down memory lane!

I just watched "Tomorrowland" the movie. When Casey picks up the pin, and is transported, entire visual sequences and dialogue are lifted from "Horizons." I don't have the time to check it out fully for comparison now, but you should do it. It gave me some sort of wicked deja vu. I think a few lines were entirely lifted directly from the "Horizons" ride.

Yes, I loved Horizons as a teen and young adult, and I hated it when they closed it - I loved the space scene best, and like most people, I really enjoyed the end of the ride when you got to choose your way home - I also miss World of Motion and Body Wars
But you are wrong about Mission Space not having fans - I'm a 61 year old grandmother who goes on Mission Space every time I visit (Orange Team, thank you very much) as many times as humanly possible! I live in Florida and have an annual pass, so that's a lot of rides - I also do Star Tours the same way
Thanks again for your effort in bringing back the good memories

I don't know why I keep seeing this in different articles, but Mr. Toad's Wild Ride was never removed from Disneyland. It still runs today.

Disney World booted it, but not Disneyland. Maybe if Disneyland had Horizons, we would still have it.