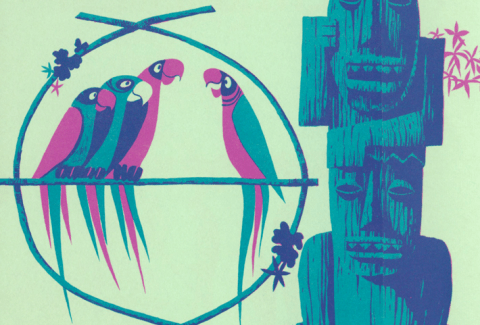 …But if we are Theme Park Tourist are going to keep up with our LEGEND LIBRARY to tell the in-depth and complete histories behind the best (and worst) attractions on the planet, there’s no time to waste. And today, our Modern Marvels series gains a new tropical tale: the story of a genuine Walt Disney original and fan-favorite for more than five decades, the venerated and beloved Walt Disney’s Enchanted Tiki Room.

Sure, it may seem odd that we’d elevate this avian Audio-Animatronics show to stand among the in-depth stories of Mystic Manor, Journey to the Center of the Earth, The Amazing Adventures of Spider-Man, Expedition Everest, DINOSAUR, Radiator Springs Racers, TRON Lightcycle Power Run, or any number of the spectacular Modern Marvels in our Legend Library…

But for nearly 60 years, the magic of the Enchanted Tiki Room has been passed from generation to generation, inspiring children of all ages to “sing like the birdies sing.” And for many Disney Parks fans, they never feel closer to Walt himself than while reclining in this Polynesian luau.

So today, we’ll soar into the untold history of this spectacular attraction from its first concepts to today, “warble like nightingales,” and see how the Enchanted Tiki Room has changed as it’s jumped decades… and states! Ready for today’s tale? “Olé! Olé! It’s showtime!”

The story of the Enchanted Tiki Room begins a couple thousand years ago (but don't worry... we'll fly through this). It was in the 200s BC that Greek philosopher Archimedes classified three mechanical devices capable of doing tremendous work with relatively little effort as simple machines: the lever, screw, and pulley.

Add in the wedge, inclined plane, and the wheel and axel and you’ll arrive at the Middle Ages, where medieval scientists and artists created “automaton” figures powered by these six simple machines, able to engage in unexpectedly complex and repetitive mechanical motion using gears, drums and cams, levers, and springs.

When a Greek ambassador visited the emperor Theophilos of Constantinople in 949 AD, he reported that the throne room was inhabited by “lions, made either of bronze or wood covered with gold, which struck the ground with their tails and roared with open mouth and quivering tongue" and "a tree of gilded bronze, its branches filled with birds, likewise made of bronze gilded over, and these emitted cries appropriate to their species"…

And exactly a thousand years later (no, really) in 1949, Walt Disney encountered the joy of such simple machines put to work in wind-up bird toys he purchased on a family vacation in France. His daughters Sharon and Diane later recalled admiring both the wind-up toys themselves and their father’s fascination with them. “It’s amazing you can get such interesting movement from a simple mechanism,” they recall him stating aloud. 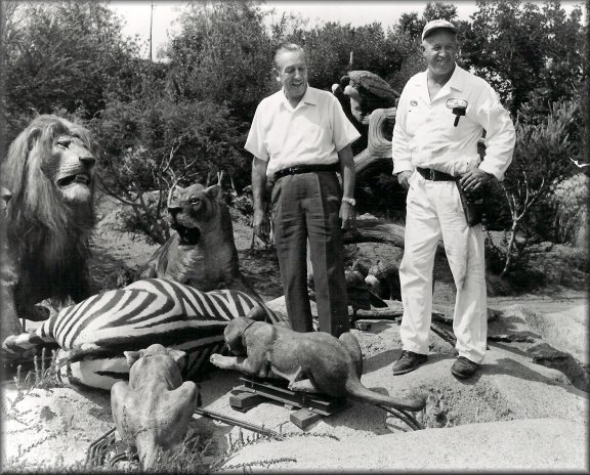 And believe it or not, the original inhabitants of the park’s 1955 Jungle Cruise weren’t so different from those simple wind-up toys. Though powered by electronics and pneumatics rather than spring-loaded potential energy, the Jungle Cruise creatures were really one of three types: static mannequins, figures with limited motion (like wagging tails, nodding heads, or flicking ears), or “performing” figures looping through mechanical motion cycles powered by hydraulic-action gears, levers, and springs.

While these (relatively) simple "electro-mechanical" figures could really be broken down into centuries-old simple machines, they were astounding to audiences of the 1950s (and still are today)! 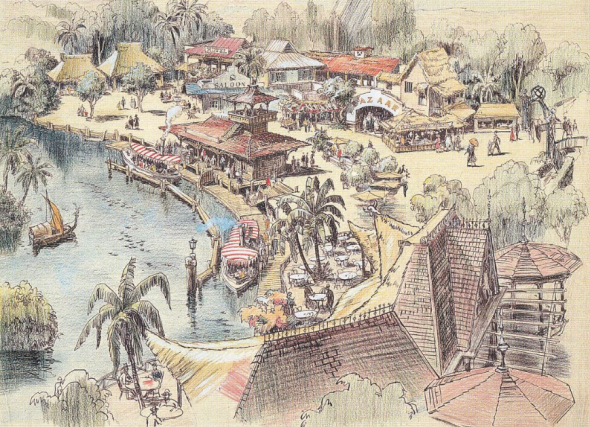 Speaking of the Jungle Cruise, when Disneyland opened, the excursion through the exotic mysteries of the Nile and beyond was perhaps the park’s most natural anchor. Stunning to audiences of the era not just for its technological prowess, the ride was designed specifically to appease the adventure-seeking hearts of 1950s audiences. In fact, Jungle Cruise – and all of Adventureland – was evidence of a very important aspect of Walt Disney's "original Magic Kingdom": its connection to pop culture.

Sure, today Disneyland is considered a shaper of pop culture, but what's easy to forget is that the park was actually shaped by pop culture, too. Walt and his designers had designed Disneyland's 1955 lineup to reflect pop culture of their time. Its five themed lands weren't chosen at random; they were the prevailing pop culture genres of the time! Those lands of futurism, fantasy, frontier, adventure, and nostalgia were designed to align with the collective consciousness of mid-century Americana.

And in an era where The African Queen, King Solomon’s Mines, The Naked Jungle, Congo Crossing, an endless stream of Tarzan films, and Disney’s own True-Life Adventure documentary series ruled the silver screen, the prevailing image of “adventure” in pop culture was of the "undiscovered" wilderness awaiting within the dark and mysterious jungles of Africa. That's what the people of Walt’s time pictured when they thought of “adventure,” so that’s where Adventureland was set.

To Disneyland’s earliest visitors, those jungles represented adventure incarnate! But if Disneyland has taught us one thing, it's that pop culture never stays the same for long.

On August 21, 1959 – just eight months after the induction of Alaska – Hawaii was admitted to the United States as the 50th (and to date, newest) state. The only U.S. state located outside of the North American continent, Hawaii’s statehood nonetheless transformed American culture back on the mainland.

And better yet, made accessible by its statehood and the emergence of affordable domestic air travel, Hawaii was heaven within reach! Just like that, “adventure” had changed. And never one to fall behind, Walt determined that his Adventureland should pivot along with it. Luckily, a major change was on the horizon for Imagineering, too, and an almost-unbelievable technological innovation would change Disney Parks forever. 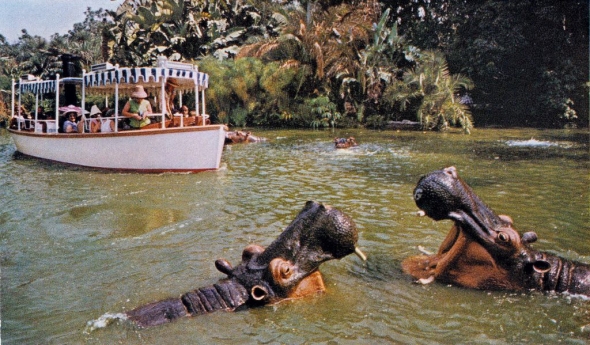 In the 1950s, simple electro-mechanical figures powered by hydraulics and pneumatics had given life to the dimensional figures along the Jungle Cruise and throughout the Living Desert in Frontierland. But just as Walt and his studio cartoonists had been fascinated with innovating upon the field of animation, so too were they dedicated to diving deeper into animation off the page, and in three dimensions: figure animation.

In fact, he envisioned an unthinkable leap forward in a place you might not expect: a Chinese restaurant planned for Main Street, U.S.A. “Out in the lobby will be an old Chinese fellow like Confucius—not an actor, but a figure made out of plastic. Now the customers will ask him questions, and he'll reply with words of wisdom.” He had his team mock up a head that could be controlled through real-time programming to blink and open its eyes and mouth, challenging his team, “Now, let’s make him talk.” 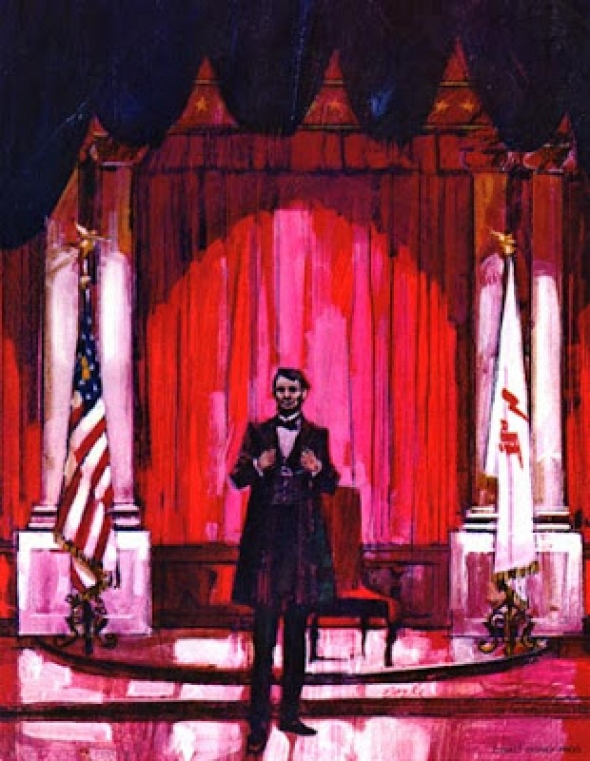 Before they could, Walt refocused the humanoid robotics figure to a new and long-gestating project: a “Hall of Presidents” wherein he hoped to have realistic figures of each of the country’s commanders-in-chief stand and address the crowd. Naturally, such an ambitious advance in technology applied at such a massive scale was lofty, and eventually the project was reduced in scope to become Great Moments With Mr. Lincoln at the 1964 – 65 New York World’s Fair.

But the designers at WED Enterprises wouldn’t wait for Lincoln to prototype Disney’s groundbreaking look into programmable figure animation. On the next page, we’ll head into the technological breakthrough that made one of Walt’s most classically beloved attractions ever take flight…