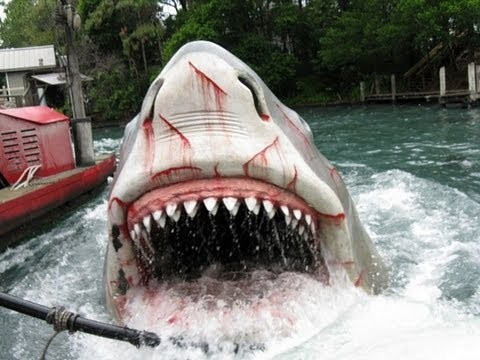 Friends, family, we are gathered here today to close a chapter; to say our last goodbyes; to send a decade of attractions to the big theme park in the sky. In the 2010s, we bid adieu to no less than 20 once-ambitious attractions. Some went out in a blaze of glory; others, a wimpering spark of a doomed fire.

Yet for each of these 20 closed attractions – the good, bad, and downright ugly – their closures marked the end of memory-making for some. Indeed, your children or your grandchildren may never see these attractions in person, and unlike the 13 "Endangered" Rides We Worry May Not Survive the 2020s, for some of these attractions, their endings were a total shock. For others, that may be for the best... but in any case, here are our last goodbyes to 20 attractions we lost in the 2010s, in order of closure.

1. Honey, I Shrunk the Audience

Oh, “Honey, I Shrunk the Audience…” Even if pop culture has long forgotten the Honey, I Shrunk the Kids franchise that inexplicably took the world by storm in the early ‘90s and spawned three films and a TV series, we’ll never forget your “cutting edge” 4D effects, the “Imagination Institute'' storyline you imposed on your neighbor, the Declassified Disaster: Journey Into YOUR Imagination, or your undeliverable promise of being licked by a giant dog. But most of all, we’ll always wonder how a 1994 3D film based on a 1989 movie lasted until ten years ago... (And for that matter, would you still be playing had Michael Jackon’s death not triggered the return of his Lost Legend: Captain EO to your theaters?)

We can’t weep for the Lost Legend: Star Tours. Its tombstone will forever be engraved with accolades listing its transformational role in Disney Parks history – the birth of the Age of the Simulator, the testing ground for Michael Eisner’s “Ride the Movies” era, and the first proof that Disney Parks could change with the times, becoming cool, hip, fun places for young people and hot movies… even if they weren’t Disney movies! While we'll forever miss seeing one of Disney's greatest original characters behind the StarSpeeder controls, we can’t weep for Star Tours because its was only closed to be “upgraded” to its own prequel, Star Tours: The Adventures Continue. And boy do they...

What can we say about the Maliboomer? It stood as a stalwart reminder of the fatal flaws of Disney’s California (Mis)Adventure: an unapologetically modern thrill ride bought from a catalogue and plopped down in Paradise Pier – a land ostensibly recreating the very kind of dirty seaside amusement park Walt Disney disliked... oops! When the launch tower fell in 2010, it was a noble death: making way for the park’s billion-dollar redesign. Put simply, California Adventure was stronger with no ride there than with Maliboomer. May it rest in pieces.

Some rides live quiet, long lives. Others burn bright,  but fast. The latter is the case with the world’s only Giant Top Spin at Kings Island. Opened less than a decade earlier, it began as the Lost Legend: TOMB RAIDER: The Ride, a mysterious, massive, and multisensory thrill ride hurtling guests through a theatrical dark ride experience of fire and ice, all synchronized to an adventurous score. Alas, when Paramount Pictures sold its parks to Cedar Fair, the theming was stripped and the ride reprogrammed to flip lazily in the dark to techno music. The Crypt didn’t have much reason to remain. The ride’s quiet death in the 2011-2012 off-season was the culmination of a quick but colossal career.

For decades, guests cheered the death of the great white shark who mistakenly bit a submerged electrical cable in a final showdown in the waters of Amity… Oh, the irony, as we now mourn this monster of the deep! Of course, the Lost Legend: JAWS was one of Universal Studios Florida’s opening day creature features; a warped and villainous reimagining of the Jungle Cruise, stranding guests on the open water with horrifying animatronics hidden beneath… Jaws gave its life to make way for the Wizarding World of Harry Potter - Diagon Alley, but at least we rest easy knowing several hidden “Easter eggs” to the fallen shark are located throughout the land.

Snow White’s Scary Adventures, you aren’t just gone too soon; you shouldn’t be gone at all! If only Disney fans would’ve accepted the initial plans for Magic Kingdom’s New Fantasyland – a proposed land populated almost entirely by “play-and-greet” princess cottages – you might still be here. Alas, fans’ revolt led to the Seven Dwarfs Mine Train instead and, needing a dedicated princess meet-and-greet space, your hallowed halls were selected. Despite the darkness and sorrow inherent in its “Scary” retelling, the Lost Legend: Snow White’s Scary Adventures believed in “happily ever after…” And so do we. Wonderfully, versions of the ride remain alive in Anaheim, Paris, and Tokyo.

For a generation, guests at the “roller coaster capital of the world” looked on in wonder at the strange, industrial warehouse marked “12 E” along the peninsula park’s beach… What was inside? Disaster Transport: an ‘80s roller coaster enclosed and rethemed in 1990 to an outer space sled ride past lasers, exploding space stations, and alien landscapes. Though we may have chronicled your life, deteriorating upkeep, and death in the Declassified Disasters: Disaster Transport feature, rest in peace knowing that you were one weird and wild ride.

When when remember you, Backstage Studio Tour, we remember heartbreak. After all, you were meant to be the heart of the Disney-MGM Studios; a headliner stolen right out from under Universal; a star-studded tour through real production facilities where on-location stars might just be around every corner! Production never really came to Disney’s Floridian studio… but you kept on going anyway. Literally. For decades. Up until the end, you outrageously maintained the pretense that you were an actual tour of a real studio and for that brazen confidence alone, we immortalized your story forever in our Declassified Disasters: Backstage Studio Tour feature...

When we celebrated you in your own in-depth Lost Legends: Maelstrom entry, we looked back on your Norwegian weirdness in awe. Vikings, a fishing village, polar bears, trolls, and an oil rig?! You achieved what few today do, Maelstrom: you were absolutely random, but entirely beloved for it. You’ll always be remembered as Epcot’s first “thrill” ride, as one of the few rides in World Showcase, and as the first soldier to stand valiantly against the imposing flood of cartoon characters into Epcot, sacrificing yourself in the fight.

Oh, Sorcerer’s Hat… we didn’t shed a tear at your death, nor do we when looking back now. Does that make us bad people? It’s not that there’s anything inherently wrong with a 122 foot tall pointed magician’s hat… it’s just you maybe didn’t make great sense looming at the end of a photorealistic and idealized recreation of 1930s Hollywood! What’s worse, you literally stood directly in front of a picturesque park icon: a palatial recreation of Tinseltown’s most famous movie palace, the Chinese Theater, which housed the park’s centering Lost Legend: The Great Movie Ride! Sorcerer’s Hat, this just wasn’t the right time and place for you. Maybe in your next life, you’ll be placed atop Spaceship Earth or in the branches of the Tree of Life instead.