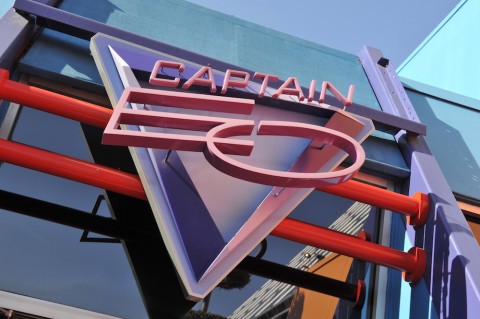 For every age of Disney Park fan, there are attractions that can only be described as legends… the most incredible, daring, moving, and cutting-edge rides of an era. Still, even the most spectacular classics can fall. That’s why our growing library of Lost Legends captures the in-depth stories of fan-favorite rides taken before their time… The series has told the full story of everything from the original Test Track to Adventure Thru Inner Space, Maelstrom to JAWS, and Snow White’s Scary Adventures to If You Had Wings and dozens more catalogued in our In-Depth Features Library.

Today, our series heads to the stars for one of our most spectacular entries yet… an unbelievable encounter with one of the world’s biggest superstars. An unimaginable turning point in the history of Disney Parks, this Lost Legend literally jump-started the decades-long cinematic push that created the Epcot we know – and love or loathe – today.

Captain EO was here to change the world… and he changed Disney World along with it. Michael Jackson’s biggest music video ever was unprecedented; an unimaginable collaboration of stars created specifically to reinvigorate Disney Parks when all hope seemed lost. In so doing, EO set the stage for a revolution, redefining Disney’s relationship with pop culture, film, and celebrity. Today, we'll look behind-the-scenes of this industry-altering film and see exactly how – and why – it came to be. 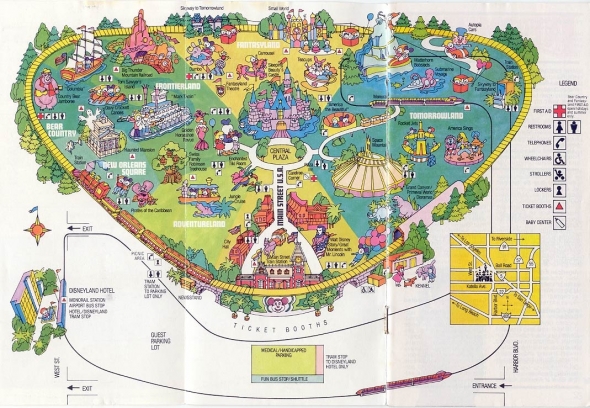 The lost legend of Captain EO begins in a desolate and dark place: Disneyland in the 1980s.

See, after Walt’s unexpected death in 1966, things were looking grim. More to the point, it wasn’t exactly clear how – or even if – Walt Disney Productions could reasonably continue without Walt Disney.

Throughout the 1970s and early ‘80s, Disney’s live action films were more busts than box-office gold, and the animation division had more or less flatlined. Disney's theme parks, too, felt like relics from another era. Though unthinkable now, Disney was far from a global leader. It was a faded film studio whose future was uncertain. In fact, Disney endured a number of takeover attempts that would’ve likely seen the studios assets divided and its brand phased out.

When Michael Eisner stepped aboard as CEO in 1984, he brought with him an extensive history in the world of film (having been the CEO of Paramount Pictures for the decade prior). That made him just the man for righting Disney's sinking studios. Despite the sour cloud that rains over Eisner's tenure today, his early years at Disney were some of the company's most successful. Eisner's the one who literally turned the $1.8 billion Walt Disney Productions into the $80 billion Walt Disney Company, acquiring and partnering with dozens of companies and organizations to craft a global media empire.

As the story goes, one part of the business Michael Eisner was not well-versed in was the company's theme parks. When invited to tour Disneyland (after all, he would now oversee it), Eisner invited his preteen son, Breck, along with him. Apparently, Breck scoffed and reported, "That place is for babies, dad." Horrified, Eisner made it his personal mission to shift the perception of the Disney Parks and make them the kind of place that every member of the family – even teenagers! – would want to visit.

With his personal goal selected, Eisner headed to the Imagineering headquarters in Glendale, California to learn as much as he could about the Parks & Resorts division and the masterminds behind it. On that fateful trip, projects were green-lit left and right in a rushed attempt to get the parks up to snuff as quickly as possible. His first fast-fired project? Videopolis.

Videopolis was a brand new entertainment venue built on the edge of Disneyland's Fantasyland. Every evening, the theater was alight with the hottest top 40 hits and the cutting edge music videos of the era, broadcast across 70 video monitors. Those who'd been to Walt Disney's original Magic Kingdom at its opening three decades earlier likely would've been aghast at the flashing lights, pounding '80s music, and hoardes of teenagers that frequented the "club." (And it would end up being converted to the much more gentle Fantasyland Theater in 1989 after a few too many gang-related incidents.) 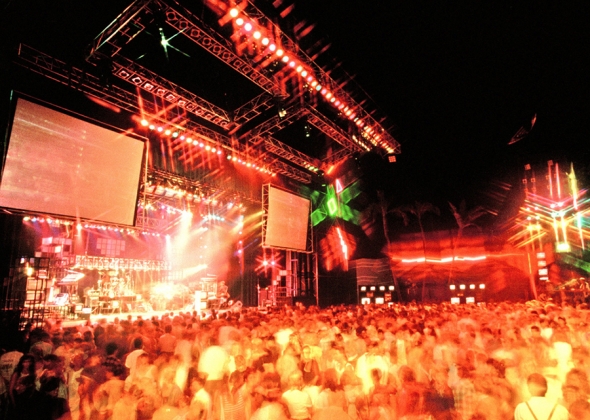 Even with the emergence of the MTV generation and a slew of videos from Starship, Mr. Mister, David Bowie, Madonna, and Wham!, the screens of Videopolis were dominated by one man... royalty – the King of Pop. Released December 2, 1983, the music video for Michael Jackon's "Thriller" is today recognized as a watershed moment for the music industry, and often regarded as the most influential pop music video of all time.

The 14-minute epic literally changed pop culture, and was selected for preservation in the Library of Congress for being "culturally, historically, or aesthetically significant" – the first music video ever to be preserved. (Interestingly, the video was even released theatrically as a "short film" before a 1983 re-issue of Disney's 1940 film Fantasia in order for it to technically qualify for an Academy Award nomination!)

Michael Jackson had instantly cemented himself as the world's leading pop culture figure; a singer, dancer, songwriter, and producer. And if his groundbreaking, earth-shaking videos could fuel Disneyland's Videopolis, just imagine what a Michael Jackson attraction could do in turning Eisner's dreams into a reality...

As luck would have it, Michael Jackson was an unrepentant lover of Disneyland. He visited often (both in and out of disguise) and often rented the park to visit in solitude after hours. Imagine, then, how thrilled Jackson was when Eisner and company contacted him about the possibility of becoming involved with a brand new attraction for the park. 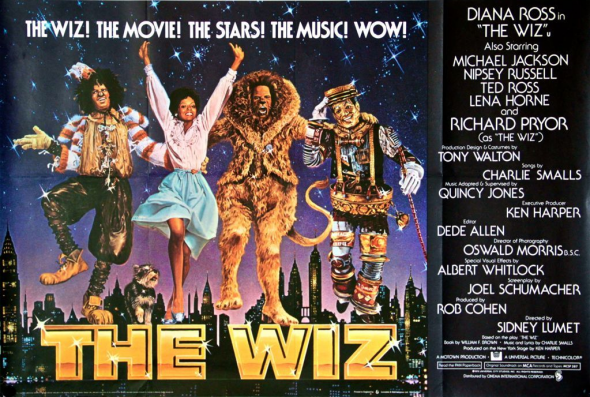 A few ideas were tossed around, but Michael in particular saw this opportunity as one to pursue a long-sought-after new career opportunity: film. While he'd played the Scarecrow in 1978's The Wiz, Michael still hadn't come into his own as an actor. Privately, he was already reporting that he was tired of making music videos and wanted a more serious career on the screen. For that reason, Disney and Michael agreed: they could leverage his starpower and music in a brand new, cutting-edge 3D film that would play exclusively at Disney's theme parks.

He had only two requests: he wanted both George Lucas (of Star Wars fame) and Steven Spielberg (Jaws, Close Encounters of the Third Kind, and E.T.) behind the camera as producer and director, respectively. The two had collaborated on 1982's Raiders of the Lost Ark (the start of the Indiana Jones series) and Michael believed them to be among the best filmmakers alive. 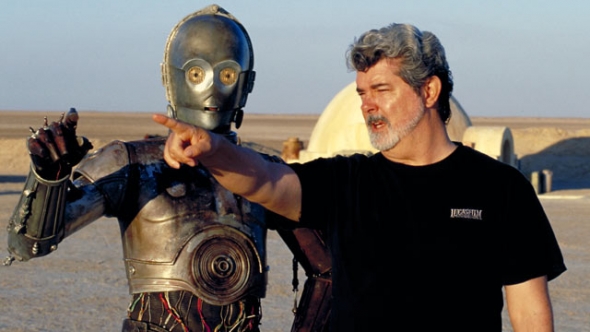 Though George Lucas' attention was split thinly in the era (thanks to Indiana Jones, the emerging computer animation division that would become Pixar, and his new ILM special effects firm), he agreed to produce and hired on Rusty Lemorande (producer of Caddyshack and writer of 1984's Electric Dreams) to handle the day-to-day on set. Lemorande is also the one who suggested that the new film feature not just 3D, but accompanying in-theater practical effects like fog and lasers. For that reason, Lemorande is sometimes called the Father of "4D."

One star that did not align? Steven Spielberg. Despite Michael's request, Spielberg was unavailable for the production (he was, by this time, working closely with Disney's competitor, Universal Studios, on their plans for a ride based on Back to the Future set to anchor a new Orlando-based movie park...). Still, the new Disney Parks / Michael Jackson feature needed a director, and Lucas used the opportunity to bring on his friend and colleague, Francis Ford Coppola. A filmmaking legend in his own right, two consecutive years of box office busts left Coppola's schedule empty. He gladly signed on, adding still more star-power to the billing. 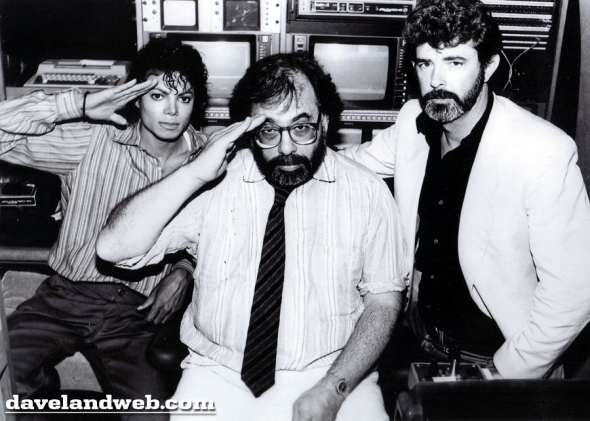 Imagine the team: Michael Eisner (Disney's new, film-industry focused CEO determined to do whatever it took to modernize Disney's parks), Michael Jackson (the biggest star in the world coming off of his biggest release ever – "Thriller"), George Lucas (the unthinkable hit-maker piloting both Star Wars and the brand-new Indiana Jones), and Francis Ford Coppola (Academy Award winning director of The Godfather).

Now all they needed was a half-decent plot... Read on...