Captain EO had its intergalactic premier at Epcot on September 12, 1986.

Housed within the park’s once-beloved Imagination pavilion, EO was neighbors with another of Epcot’s most missed Lost Legends: Journey into Imagination. It replaced a custom 3D film called "Magic Journeys" that had been showing since the park's grand opening in October 1982. 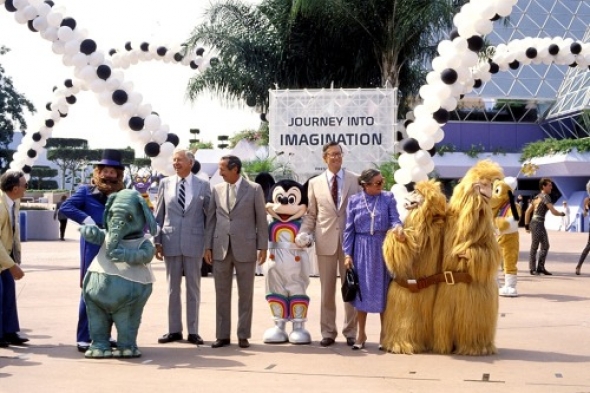 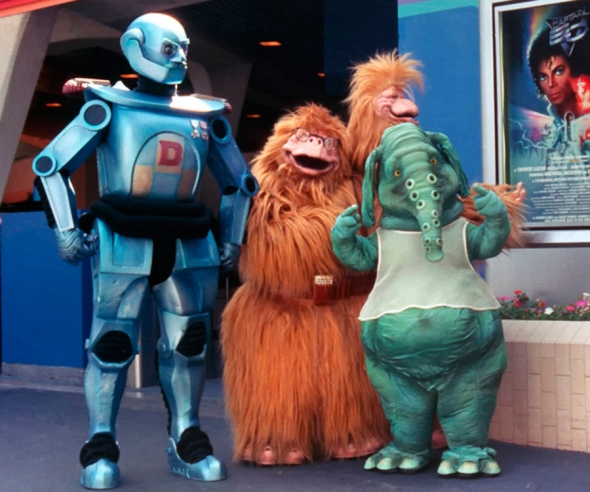 Major Domo, Idey, Ody, and Hooter were there, too. (Jackson was no where to be seen… he’d deliberately decided to take a year out of the spotlight, though an infamous photo of him sleeping in a hyperbaric oxygen chamber surfaced the week of the premier – what Michael himself later suggested was an intentional stunt to draw attention to EO’s debut.)

Early reports from the media were… well… mixed. The Los Angeles Times famously reported on October 9, 1986:

“For all its wondrous imagery, Captain EO is nothing more than the most elaborate rock video in history: Like a hollow chocolate Easter bunny, it’s a glorious surface over a void. No one expects an amusement-park diversion to be Gone With the Wind, but given its production team credits and the film’s lavish budget (rumored to be between $15 million and $20 million, although Disney refuses to release any figures), audiences have a right to expect more than empty flash.”

What inspired them so? Here's the breakdown... 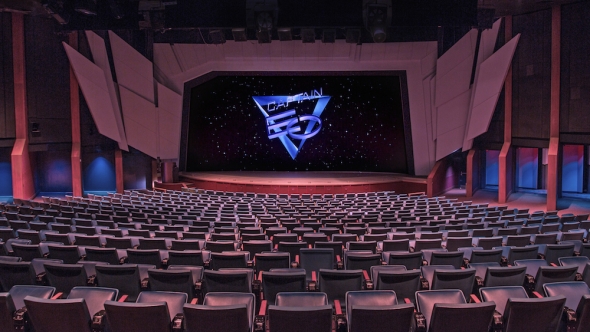 That's all that can be seen on the screen as guests take their seats in the palatial theaters at Disneyland Park or Epcot. Once seated, guests would don their spectacular 3D glasses and settle in.

When the film opens with a swirling galaxy, a starfield glows around the theater, immersing us in the magic of space. In the distance, a rocky asteroid draws closer and closer, earning gasps and wonder from the audience. (Consider that, for guests during EO's opening years, the use of stereoscopic 3D was sincerely groundbreaking... as a matter of fact, Captain EO is remembered today as an early example of 3D's rebirth.)

With a distant laser blast, a red beam strikes the asteroid as it explodes. A rusted, pod-like spaceship protected by metallic wings glides past. If it's reminiscent of Star Wars, that's intentional. Not only did George Lucas bring along many of the creative minds behind the series, but Jackson specifically requested that his film carry on the look set forth by Star Wars: a grimy, industrial future of burnt-out ships and aged mechanical landscapes... (before Star Wars, films of the '60s and '70s had cast the future as a sleek, white, geometric world of polyesther and pristine rockets... the kind of future envisioned by a Lost Legend: Walt's Tomorrowland and the Peoplemover.) 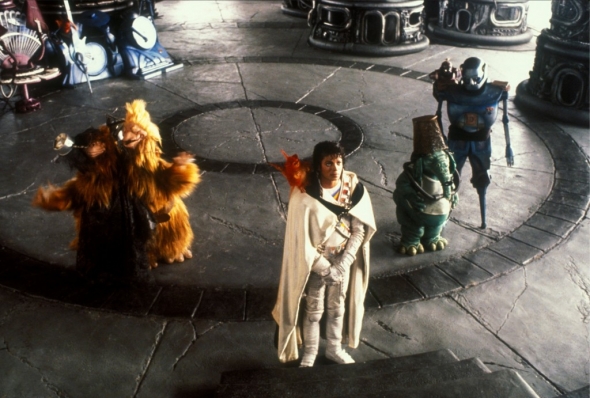 Inside the ship, we're introduced to Idey and Ody (the two headed navigator and pilot), security officer Major Domo (and his mini-nesting robot, Minor Domo), the fluttering Fuzzball, and the clumsy Hooter. They're en route to homing beacon on an alien planet... and already, they've tripped the planet's intrusion alarm. The Captain himself rises from below deck (accompanied by the triumphant score of James Horner, orchestrator of the scores for Titanic and Avatar to name a few).

"We're going in," EO sings. "Listen, the Commander considers us a bunch of losers! But we're gonna do it right this time because we're the best. If we don't, we'll be drummed out of the corps."

Before too much celebration can commence, an alien vessel comes roaring from the planet's atmosphere, on course to ram the ship. Spiraling through space, EO and crew narrowly avoid the destroyer as its fearsome lasers break through the hull. EO dives toward the surface of the planet, racing down into the metallic trenches and steaming industrial alleys that appear to make up its surface. Narrowly avoiding certain doom, the ship nonetheless takes one hit too many and crash lands... into the homing beacon!

Having successfully appeased Commander Bog (played by Dick Shawn, his face broadcast into the ship via holo-transmission), he presses: "Well, so far so good, Captain EO... Though I must admit, I am a bit surprised after the mess you made of your last mission. But now that you've found the beacon, take the map, find the Supreme Leader, and give her the Gift."

The crew sets off across the smoking, steaming, mecho-landscape of the alien planet, only be ambushed by strange humanoid creatures composed of wires, metallic plates, and rods. They carry EO to a brilliant, grimy, towering throne room with geothermal vents guzzling smog... then, a marred, horrifying creature descends on metallic tubes. It's the Supreme Leader, who looks as if she's become connected to the mehcanical planet. Her darkened eyes and pale face resemble a skull, and her metallic, pointed fingers click and clatter as she descends. 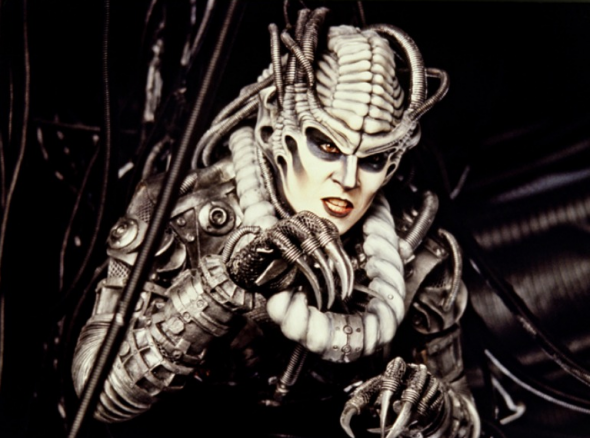 "SILENCE," her gravelly voice hisses as she gazes upon EO standing before her throne. "Infidel... You infect my world with your presence. Turn the others into... trash cans! And for him, 100 years of tortune in my deepest dungeon."

"Your highness," EO coos, "my loyal companions and I accept these punishments."

"We have come here uninvited and unannounced," EO steps toward her.

"To bring you a gift, your highness. To someone as beautiful as you."

"You think me beautiful?" She hisses, descending toward him. 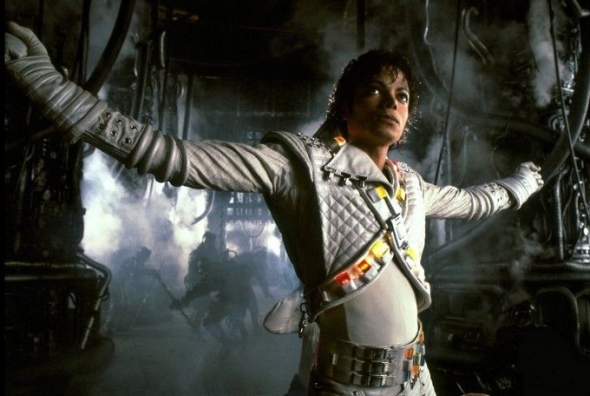 "Very beautiful within, but without a key to unlock it. And that is my gift to you!"

So, let me see this gift!

"Not only see, your highness," he points at his ear. "But hear."

What follows can only be understood by seeing it with your own eyes. That's why we're including this unabridged look at Captain EO in all of its original glory. An absolute must-see, this Lost Legend will leave your toes tapping even thirty years later. Sit back, relax, and enjoy the magic here:

Despite promises that Captain EO would play exclusively in two theaters in the entire galaxy – EPCOT Center and Disneyland – Jackson’s star was destined to shine brighter. In 1987 – just one year after its debut – the interplanetary musical landed in Tokyo Disneyland, as well.

Jackson’s iconic hero of light and song could be seen at four theaters across three continents. The mile-a-minute, undeniable force of EO and the headline-grabbing playbill of Jackson, Lucas, Coppola, and Huston ensured that the lofty expectations set by Eisner were met. Captain EO reinvigorated Disney Parks, sincerely launching a new mindset and a new strategy: pop culture, cinema, stars, and headlines would become the de facto prerequisites for future projects. 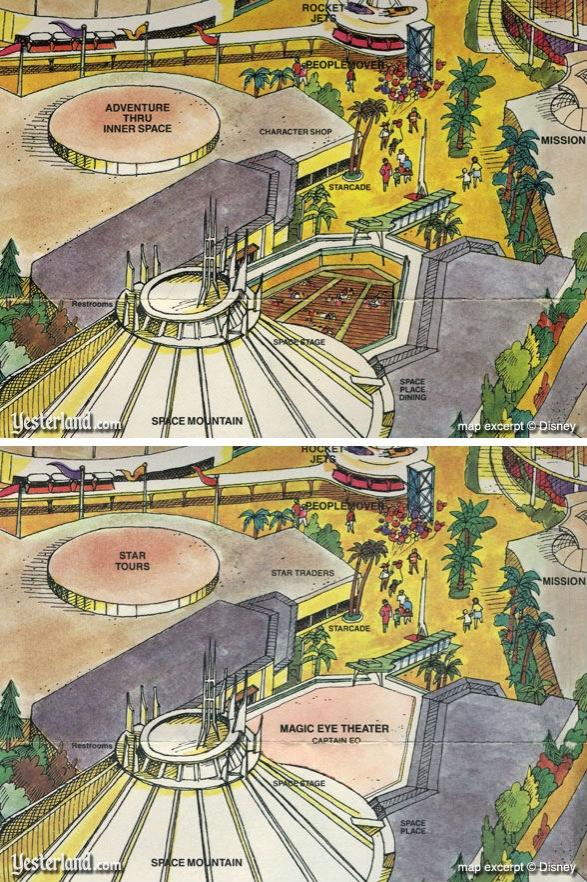 The success of Captain EO, for example, is what prompted its neighbor – another Lucas-produced Lost Legend: Star Tours that opened the following year. Lucas' partnership with Disney Imagineering continued with The ExtraTERRORestrial Alien Encounter and Indiana Jones Adventure: Temple of the Forbidden Eye at Disneyland – all attractions that, just a decade before, would never have been associated with Disney Parks.

Expand that to today’s immersive worlds themed to AVATAR and Star Wars, and box-office buoyed projects focused on Marvel and Pixar. Because Captain EO succeeded, Disney Parks did become places to "ride the movies" with hot properties, well-known stars, and more. Like it or not, Captain EO set the course for the American Disney Parks we know today: parks that, increasingly, rely on intellectual properties, screen-based rides with Hollywood casts, and proven box-office success.

And yet, while EO shaped the future of Disney Parks, it also showcased the pitfalls of chasing pop culture… The end was in-sight. On the last page, we’ll dissect the unusual and unforgettable circumstances that began to shift perception of Captain EO and what became of the 3D spectacular.