Journey into YOUR Imagination: The Unimaginable Story Behind the Ride Epcot Fans Hated 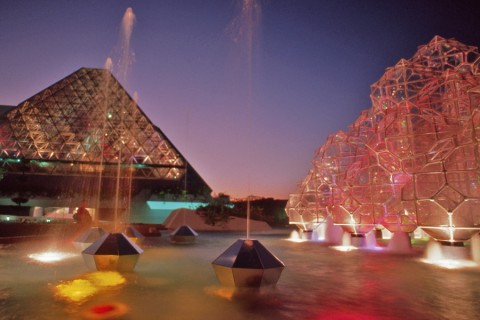 One little spark of inspiration is at the heart of all creation. A dream can be a dream-come-true with just that spark from me and you! Alight with wonder, these words brought with them an era of optimism, light, and joy when they were sung by heroes of EPCOT Center's early years - the enigmatic Dreamfinder and his imaginative companion, Figment. But when imagination falters, mistakes can be made...

The truth is, not every attraction is destined to be a fan favorite. But today, we want to dive deep into the story of a ride that was already loved by a generation and celebrated as a living example of Imagineering’s best… until Disney (literally) tore out its character resulting in one of the most despised and (thankfully) short-lived Disney attractions ever.

Here at Theme Park Tourist, we’re building a library of Disaster Files, chronicling the in-depth, behind-the-scenes stories and experiences of attractions that tore the fan community apart. Demolished classics, failed technologies, dated character overlays, and slashed budgets have led to in-depth Disaster Files on Superstar Limo, The Enchanted Tiki Room: Under New Management, Rocket Rods, Stitch’s Great Escape, and so many more. We've even seen what happens when Disney misses the park on entire parks when we told the full stories of Disney's California Adventure and Walt Disney Studios Park. 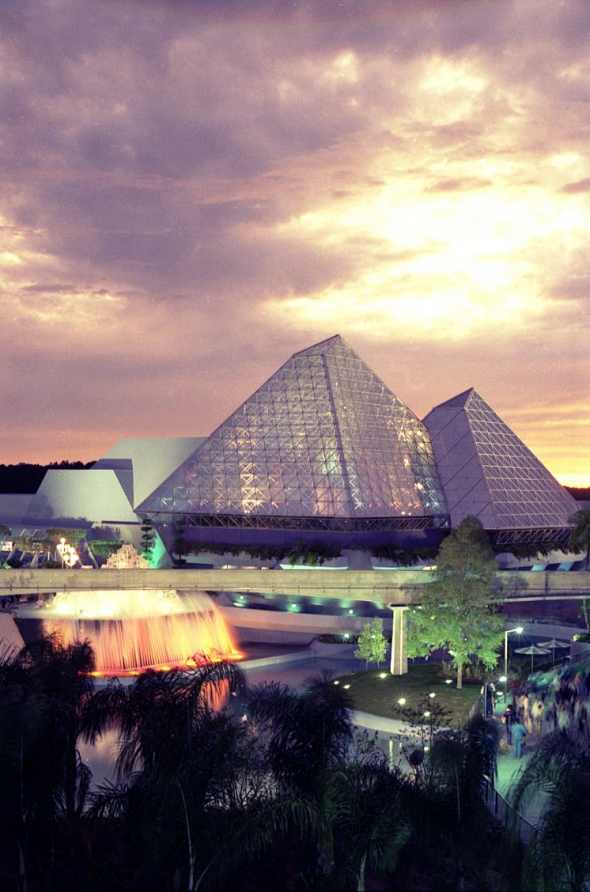 There’s no shortage of Lost Legends entries (and ensuing Disaster Files) about rides at Walt Disney World’s Epcot, but of them all, this might be the most controversial and hated attraction Epcot ever hosted. Although it was only open for two years, the infamy of this debilitating disaster has made it a laughing stock, even for those who never had the chance to see it in person. Short-lived, short-sighted, and plain-old shortened, this dark ride proved to be more of a death than a rebirth. It can only be the story behind Epcot's depressingly unimaginitive Journey into YOUR Imagination.

Today we'll go in-depth to discuss the history of Epcot's Imagination pavilion and why Disney fans consider it holy ground. Then, we'll explore the creation of this long-detested ride, see what it was like to experience it, and find out what replaced it after its short life during Epcot's Millennium Celebration. Ready to journey into imagination and back?

As usual in our in-depth series, the story of Journey into YOUR Imagination deserves and requires a little background; so let’s spend a minute catching up. 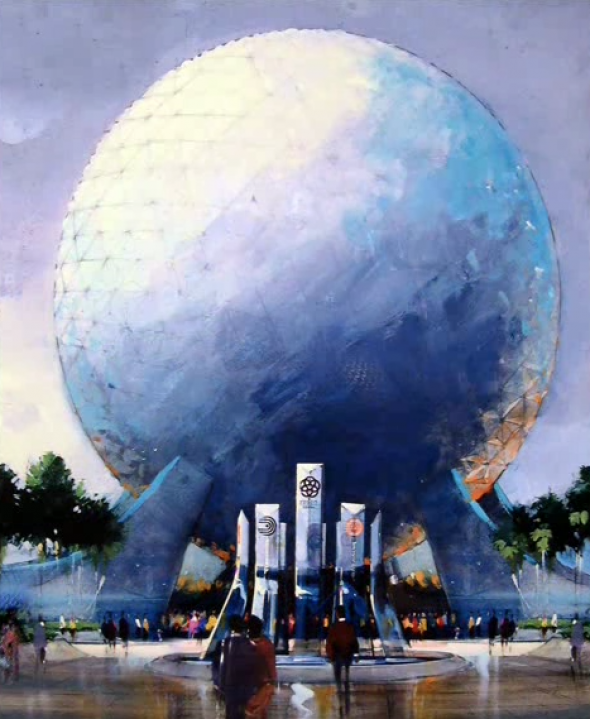 In EPCOT Center, Disney’s Imagineers had taken the core concepts of Walt’s would-be city of the future and created a permanent World’s Fair. The concept was brilliant: massive pavilions in Future World would be financed by mega-corporations, who could in turn showcase the ever-evolving innovations behind their piece of industry and science: oceans, agriculture, communication, energy, transportation…

Stunning in its simplicity, the idea of a living, futuristic World’s Fair sincerely redefined a visit to “Disney” in an era where castles, princesses, fairytales, and Mickey Mouse had been the end-all-be-all of a Disney vacation. 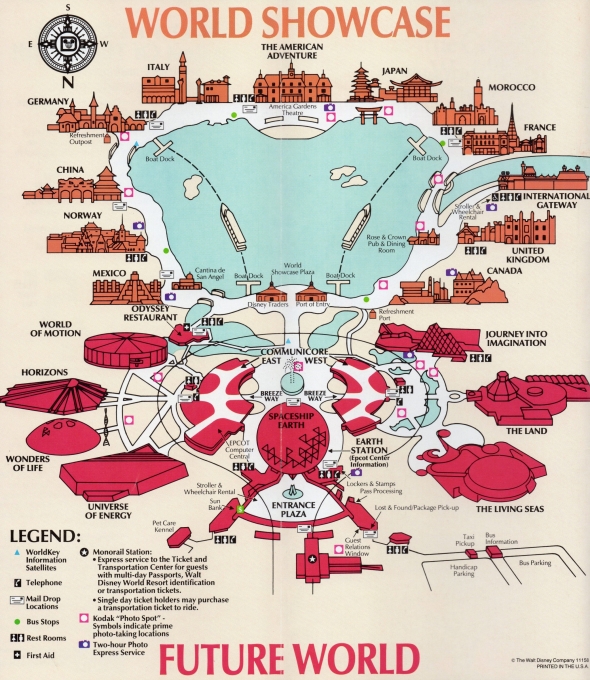 Click and expand for a much larger view. Image: Disney

Each of Future World’s pavilions would be massive, populated by multiple rides, shows, attractions, and restaurants all selling its sponsor’s message. And like a real World’s Fair, people would flock to Disney’s EPCOT Center, eager to see the newest advances in transportation inside General Motors’ World of Motion; they’d explore the expanding understanding of incredible human body in Metlife’s Wonders of Life; they’d ride through an entertaining (and secretly informative) trip into the history of fossil fuels on Exxon’s Universe of Energy. “Edutainment” at its finest, each pavilion would balance the sponsor’s message and sales pitch with genuine information, often in elaborate dark rides showcasing Disney's must-see showmanship. 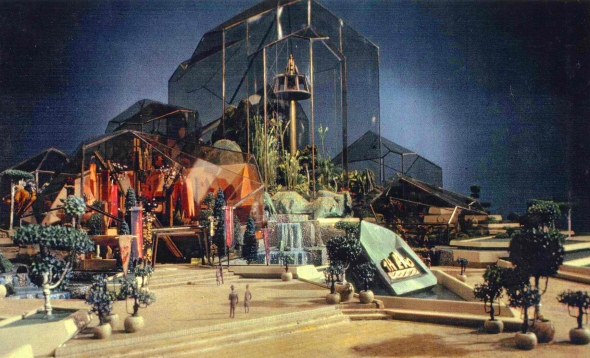 Consider The Land pavilion. Originally, famed Imagineer Tony Baxter was put to work designing an environment-focused pavilion to be sponsored by a logging company. The logging company wanted a pavilion all about habitats, sustainability, and ecosystems, so that’s what Tony designed. Its headlining attraction would’ve been a suspended dark ride aboard hot air balloons, with guests whisked through the seasons, following a drop of water from the highest mountain peaks to the forests and wetlands below, with guests then able to walk through actual, living greenhouse ecosystems at their own pace.

But when the logging company bailed, Kraft Foods stepped in and agreed to sponsor The Land. But Kraft wasn’t interested in an exploration of ecosystems and sustainability. They wanted their Land pavilion to focus on topics relevant to their brand: nutrition, agriculture, harvesting, and food. And voila – The Land pavilion opened with Listen to the Land, Symbiosis, and Kitchen Kabaret in its attraction lineup.

In other words, the sponsorship of this “World’s Fair” park shaped it. And for Disney, it was a win-win. Kraft would pay to design and build all of The Land’s attractions in exchange for its logo and message being strewn throughout. And to top it all off, the theory was that Kraft wouldn’t want their brand associated with an out-of-date pavilion or aging attraction... So they’d naturally update the pavilion periodically out of their own pockets (paying Disney to design and build yet again) to keep their brand associated with the newest technologies. Disney only had to sit back and wait for the park's sponsors to finance the future! Not a bad deal at all for Disney, right?

Which brings us to the farthest corner of Future World where, upon EPCOT Center’s opening, a single pavilion stood out.

Among EPCOT Center’s lineup of industrial pavilions themed to evolving technologies and cutting-edge industries, Imagination might’ve seemed an outlier. And it was. That was the point.

Kodak – an American photography giant – was eager to partner with Disney (and indeed, over the three decades of partnership they forged, Kodak was unstoppable. The New York based company was everywhere, sponsoring attractions, every resort camera shop, Kodak Photo Spots strewn across the parks, and even the complimentary park guide maps handed out at park entrances).

For their first act, Kodak agreed to finance a pavilion of their own for EPCOT. And given that EPCOT probably wouldn't have a pavilion dedicated to photography, they only requested that whatever topic their pavilion covered, it be “something imaginative.” Given this order, Disney assigned Tony Baxter – recently removed from The Land project – to give Kodak what they wanted. And boy, did he!

Upon opening on March 5, 1983 (six months after the rest of EPCOT Center), Journey into Imagination was the undisputable anchor of the Imagination pavilion and a defining experience of what EPCOT Center was. 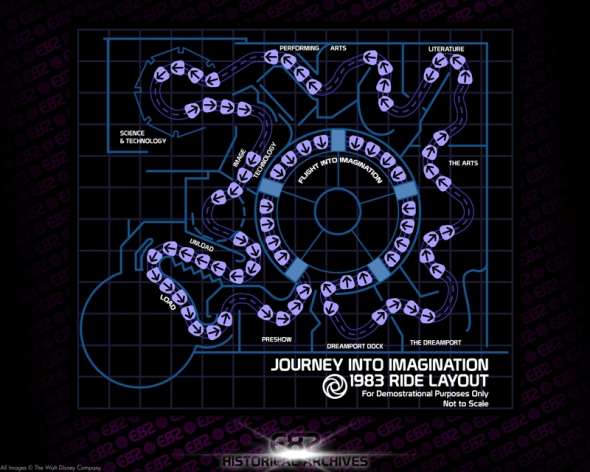 Aboard the 12-minute dark ride, guests would be seated in a modified string of Omnimovers and set course for the clouds. The ride’s opening scene – and perhaps its most awe-inspiring – was an engineering marvel in which the ride vehicles entered into a massive turntable (think Carousel of Progress, if a single stage aligned with the audience and rotated at the same rate). In this iconic intro, guests would meet the enigmatic and jovial red-bearded Dreamfinder, afloat on his fantastical Dream Catcher zephyr as he scours the world for “sparks” of imagination.

Mixing together “two tiny wings, eyes big and yellow; horns of a steer but a loveable fellow,” just a dash of “royal purple pigment,” and then, voila! We meet Figment, the beloved purple dragon who’d act as a whimsical connection to the world of make-believe. 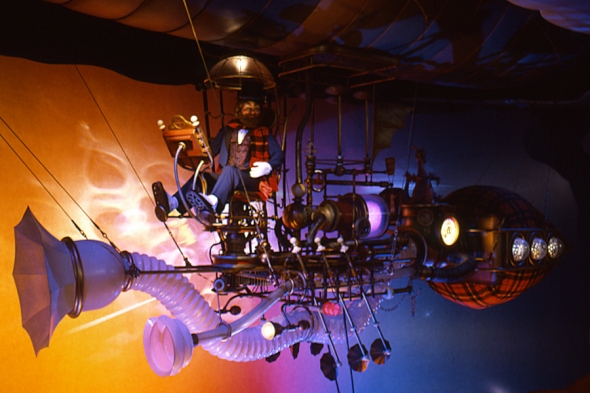 With Dreamfinder and Figment leading the way, this legendary and stunning dark ride would whisk guests into built-out, abstract scenes representing the realms of imagination: art, music, performing arts, and science. The adventure through the bright, wonderful inner workings of the mind was EPCOT at its finest. If it felt entirely out of step with the park’s more technological marvels, that only made Imagination’s inclusion even more valuable.

Worth mentioning – even if Dreamfinder and Figment were the icons of this imaginative, epic dark ride, a star of equal brightness had to have been the ride’s theme song, “One Little Spark,” written and composed by the Sherman Brothers. This iconic songwriting duo is responsible for most of the can’t-forget songs in the Disney Parks songbook, including “it’s a small world,” “The Tiki, Tiki, Tiki Room,” “Supercalifragilisticexpialidocious,” “Miracles from Molecules” (from Disneyland’s Lost Legend: Adventure Thru Inner Space), and Walt’s personal anthem, “There’s a Great Big Beautiful Tomorrow.” 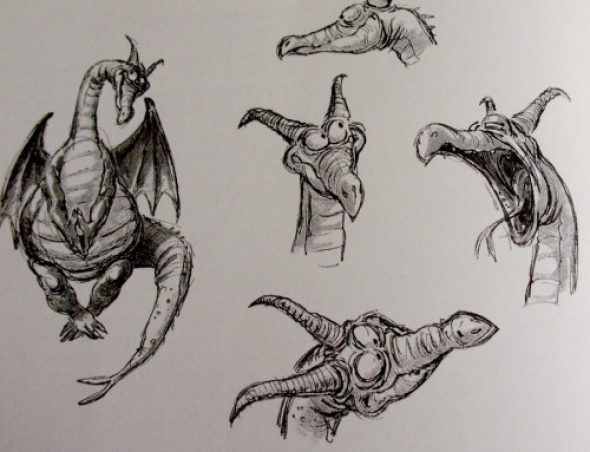 After all, EPCOT Center had intentionally been designed without Disney movies or Disney characters – no princesses, no castles, no Mickey Mouse – so Dreamfinder and Figment were quickly co-opted by Disney Parks fans to be the de facto icons of the park. Journey into Imagination was a pinnacle of theme park storytelling, touching and inspiring a generation of young people who credit it (and other EPCOT originals) with their love for themed entertainment design.

So how could such a good thing go so wrong?

Of course, Disney didn’t set out to turn this masterpiece attraction into the most hated ride Epcot’s ever hosted. So what happened? Read on…

Great article - but the EPCOT map labeled as 1983 can't be from 1983 as it includes Norway and the Wonders of Life, both of which opened much later.