Disney's California Misadventure: The Inside Story Behind Disney's $2 Billion Mistake 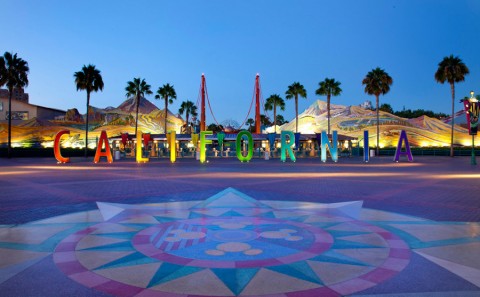 When you think of Disney, you may think of the storied, golden years of animation heralded by Walt himself; of today's international media conglomerate acquiring Marvel, Star Wars, Pixar, and more; you may imagine the world's leading theme parks with fairytale castles at their center, or pirates, princesses, and parades. One thing that you probably don't associate with Disney? Failure.

Our Declassified Disaster series was created to share the rare instances when Disney Parks have missed the mark, with in-depth entries exploring unfortunate attractions like Stitch's Great Escape, The Enchanted Tiki Room: Under New Management, Disney-MGM Studios' stalled Backstage Studio Tour, the sputtering Rocket Rods in Disneyland's abysmal New Tomorrowland '98, and the laughably bad Journey into YOUR Imagination. But those attractions, too, eventually close or crumble, living on only in the stories people tell about them. What happens when a mistake isn't so easily brushed under the rug or written off? What happens when the thesis behind an entire theme park is broken?

When Disney's California Adventure opened in 2001, Disney executives and designers quickly came to terms with the fact that they had a more permanent problem on their hands. An entire park of problems, California Adventure was underbuilt, under-funded, and devoid of the kinds of rides, characters, stories, and settings people grew to expect thanks to Walt's own Disneyland just a few hundred feet away. And unlike a passing film or a maligned ride refurbishment, the $600 million second gate at the newly-rechristened Disneyland Resort was a problem that wouldn't get better with time.

Our deep, deep dive into Disney's "California Misadventure" is a two-part exploration into the history of Disney's biggest failure (and its rise from the ashes). In this entry – Part I – we'll trace the park's development and step into California Adventure as it appeared on its opening day to explore exactly why fans, executives, and Imagineers agreed that it was broken at its core. Then, in Part II, we'll walk through the park as it appeared after a grand, billion-dollar re-opening in 2012... and see why Disney may be making its most costly mistake all over again. Settle in and let's get started. 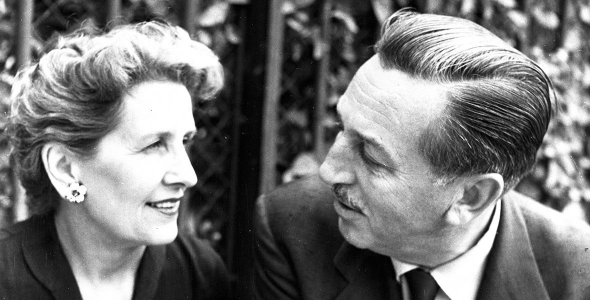 Before Disneyland, amusement parks in the United States really came in one of two forms. Some originated as Victorian-era "picnic parks" supplied with patrons via the new railroad system, adding dance halls, carousels, and wooden roller coasters over decades and decades. Others took shape as seaside boardwalks with gaudy, attention-grabbing games, food stands, and thrilling rides open to the public.

Given that those were the prevailing images of such amusement parks, it's no surprise that when Walt showed interest in opening his own, his wife Lillian asked, “Why would you want to get involved with an amusement park? They're so dirty and not fun at all for grownups."

"Well, that's exactly my point," Walt told her. "Mine isn't going to be that way. Mine's going to be a place that's clean, where the whole family can do things together." 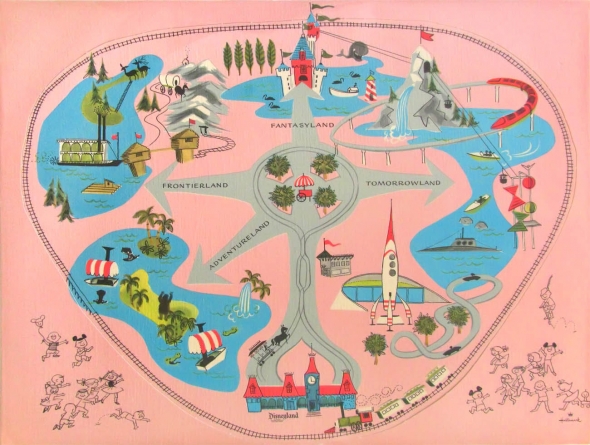 And when the first guests to Disneyland stepped through the gates of Walt Disney's new attraction in 1955, they would find that it was entirely unlike anything that had ever come before. Walt Disney's park had it all: lost Indian jungles, turn-of-the-century Midwest towns, gleaming cities of the future, the reverent and romantic Old West, storybook villages... Brought to life by filmmakers and artists, the park transported guests to idealized, romanticized times and places; to the "worlds of yesterday, tomorrow, and fantasy" passed through a lens of nostalgia and cinema; places not found on a map, but born of pop culture's collective vision of adventure, frontier, fantasy, and tomorrow.

If there was one thing Disneyland did not have, it was size. The original land purchase totaled about 160 acres, of which 60 was occupied by Disneyland. The rest was divided between the massive parking lot – with a larger footprint than the park! – and the various “backstage” facilities powering the property. Otherwise, the entire complex was landlocked by streets to the west, south, and east, and the under-construction Interstate-5 to the north. Situated cozily between existing streets, Disneyland was snuggly cemented in place with little room for growth. 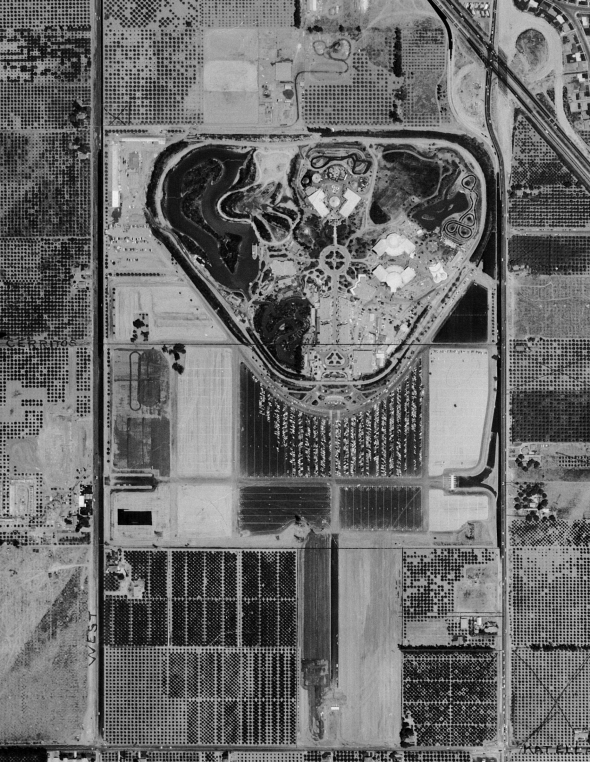 That might've been fine... except that once word of Disney’s land acquisition got out, the orange groves around the property were gobbled up as hotels, motels, convenience stores, and more squeezed into every square foot of Harbor Blvd. and Katella Ave., desperate to get a foothold near the young park. Of course, each built its sign taller, brighter, and louder than the rest as the sleepy farmland of Anaheim became a bustling urban landscape.

It’s no secret or surprise to fans of Disney Parks that Walt detested the encroaching battle lines of reality. And for first-time visitors, it can be astounding that, from the Disneyland Railroad, you can hear the commotion of cars; guests staying at off-property hotels can be a 5 minute walk from the parks; and the Monorail provides astounding aerial views of traffic jams on Harbor Blvd. While the ingenious earthen berm built around the park acted as a great wall to keep visual intrusions out, the fact remained that the real world was a little too close to Disneyland for Walt’s liking.

It was Disneyland’s tiny footprint, of course, that inspired Walt to do things differently in his second take. 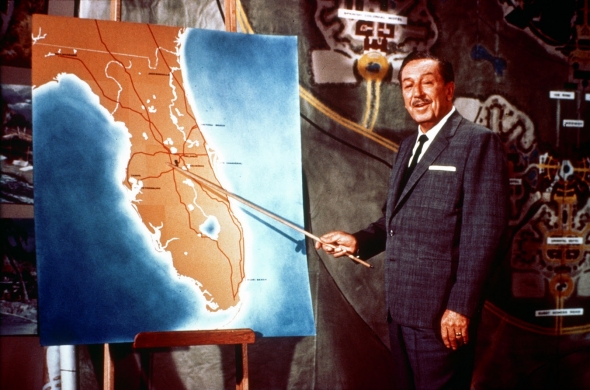 Dissatisfied by the rapid urbanization of Anaheim and the way that the modern world so invaded Disneyland’s sphere, Walt and his team did something unusual: they began scouting for a space to build something else. But this time, Walt was determined to control the experience on a much larger scale. Of course, we know now that the Walt Disney Company was able to purchase massive landholdings in sleepy Central Florida (this time under false company names so as not to attract the attention of developers, who might otherwise rush in to buy the land themselves) and even work to establish the Reedy Creek Development District, a strange (and questionably legal) political arrangement where the Walt Disney Company effectively governs itself and grants its own permits.

Walt Disney famously said of his then-unnamed Florida Project: “Here in Florida, we have something special we never enjoyed at Disneyland... the blessing of size. There's enough land here to hold all the ideas and plans we can possibly imagine." And it did. In Florida, Walt and company had well over 25,000 acres of undeveloped land, spanning about 40 square miles (famously, the size of San Francisco, or twice as large as Manhattan). 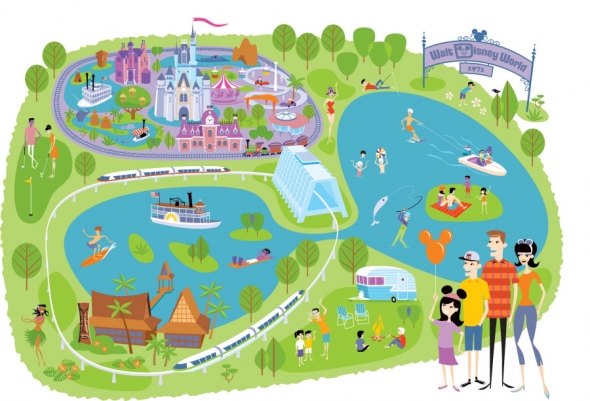 But unlike at Disneyland, the theme park wasn't alone. Walt Disney World was billed as the "Vacation Kingdom of the World," and even though only a small corner of the property had been developed, it offered plenty to earn that title. Guests arriving for Magic Kingdom would park at the Transportation and Ticket Center and board a Monorail or ferry boat, looping around the 200-acre, man-made Seven Seas Lagoon (itself larger than the original Disneyland property purchase) and passing by two deluxe resort hotels. Walt Disney World offered hiking, boating, fishing, and swimming.

And it only got bigger from there. 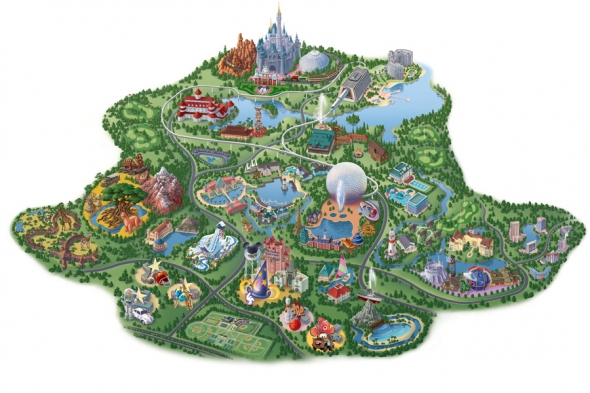 And then… there was Disneyland. 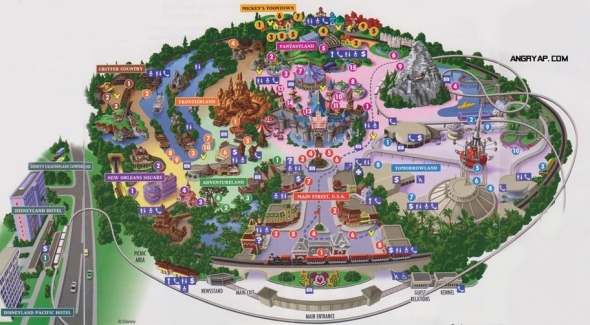 The early 1990s – just as Walt Disney World was gearing up for its fourth theme park – Disneyland looked… well… quite a bit like it did in 1955: a single theme park, its gargantuan parking lot, and the nearby Disneyland Hotel.

Spurred by still-fresh CEO Michael Eisner, The Walt Disney Company planned to change that. Early on in his tenure, Eisner began to impress upon his team that Disneyland needed to change. If Walt Disney World could command stays between four and ten days, it was nothing short of a waste that Disneyland – even four decades after its opening – remained a single-day park catering almost entirely to local audiences. By far, most of Disneyland’s visitors seemed to come from Southern California neighboring states, and they’d spend one day – maybe two – before moving on.

If Eisner had his way, Disneyland could, should, and would grow into a multi-day, international resort destination, just like Walt Disney World. 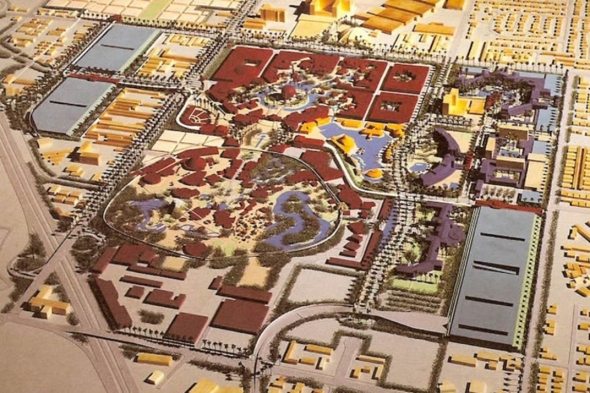 On May 8, 1991, the company officially announced plans for a $3 billion expansion that would take the measly Disneyland and turn it into the Disneyland Resort. In an all-at-once growth spurt, Disney would transform the tiny Anaheim resort property to a world class destination.

It would include a complete rebuild of the existing Disneyland Hotel, the addition of three new, immersive resort hotels, a 5,000 seat amphitheater called the Disneyland Bowl, the Disneyland Center shopping district built around a six-acre lake, and the cornerstone of the project: a second theme park, built on the only expansion pad Disneyland had: its own parking lot. 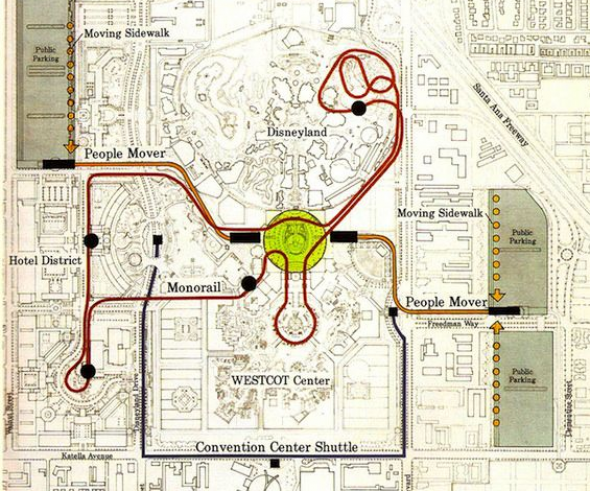 This massive expansion would’ve equipped the resort with new parking decks, each leading to Peoplemover systems whisking high volumes of visitors to the resort’s central hub, where they would stand directly between the entrances to the two theme parks in the new Disneyland Plaza. Directly across from the Main Street Train Station and the timeless wrought iron gates of Disneyland would stand the entrance to the second theme park: the most ambitious one Disney had ever designed. Read on…

You do a disservice to what DCA actually was when it opened...like it or not (and I am guessing, as a non-Californian you are not a lover of my home state), the park WAS a good representation of what California is, or at least was when it opened...it was a bit sparse when it opened and showed the strains of its budget, BUT SO DID DISNEYLAND! My family enthusiastically attended this park frequently in the early years; we love it all the more now as it's grown and we're thrilled with the rebirth (even though we hated the 3 years of "California's Box Adventure")....But the earliest days did in no way earn your UTTER CONTEMPT that you show for something that a LOT more people loved than you give it credit for..

Your article is great visited both DL and DAC for the first time late 2015 and I had the time of my life everything is great about the park and its hard for me to imagine it in its 2000's form but I must say something... IT DOES NOT compare to DISNEY TOKYO SEA... DTS is the BEST place I ever been in my life and also has by far the greatest NIGHT TIME showing.

My favourite ride of both parks is located in California Adventure. That Toy Story ride is the best. I love all the little games.

Hmm, very interesting read. I really like these longer history articles. Of course, idk anything behind the parks besides what people have told me and what I have read (like these articles,of course) but besides my inexperience (I've gone to the park, though. I just don't know much behind it since I was just a newborn by the time this was finally open haha), I must say you do a good job. Thanks for the interesting article. :3