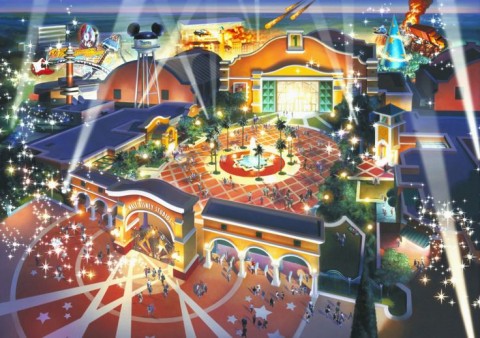 If you’re reading this, chances are high that you’ve had the pleasure of exploring Disneyland, Magic Kingdom, or one of their four international sister parks. In doing so, you’ve left today and entered “the world of yesterday, tomorrow, and fantasy.”

Since Disneyland opened in 1955, each subsequent Disney park with a castle at its center has strived to more fully immerse guests into romanticized versions of those worlds past, present, and future. The idea is that guests will be transported to another time and place that can’t quite be found on a timeline or map. While they may resemble history, they’re enchanted; passed through an idealized lens.

You’ve likely walked right down the middle of the glowing, incandescent Main Street, U.S.A. to relive the time period where the gas lamp and the electric lightbulb briefly coexisted; you’ve explored the idling past and the rumbling call of the West in Frontierland; you’ve stepped into a future that never will be in Tomorrowland; you’ve discovered the misty secrets of a dense uncharted jungle in Adventureland. 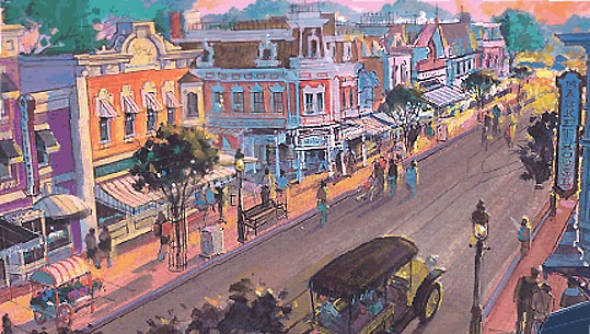 And through it all, you’ve likely had one persistent thought repeat again and again in your mind: “I only wish I could leave this fantasy nonsense behind and get back to reality.”

At least, that must’ve been what Disney’s executives imagined when they commissioned the construction of Disney’s most disastrous theme park ever; a park that dispensed entirely with immersion, fantasy, and romance in favor of blistering blacktop, industrial backlots, metal lighting rigs, electrical poles, and big, boxy, tan showbuildings. 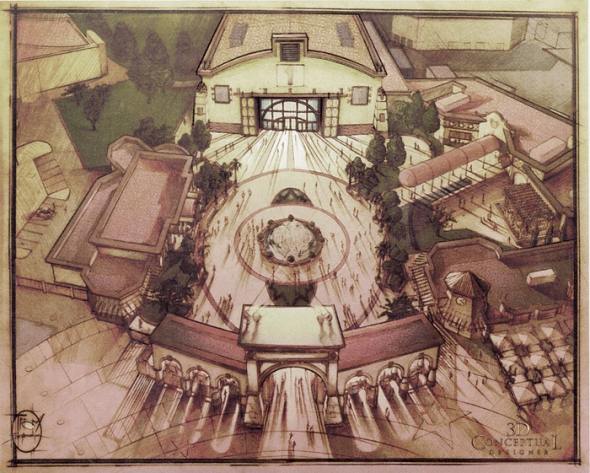 Here at Theme Park Tourist, our Disaster Files series has had the unfortunate job of chronicling theme park missteps, mistakes, and outright disasters from beginning to end. We’ve told the in-depth stories behind a number of attractions that Disney designers would probably prefer to never hear about again, from the failed Rocket Rods to Superstar Limo; Epcot's hated Journey into YOUR Imagination and SeaWorld's waterlogged Journey to Atlantis to Stitch’s Great Escape. In one entry, we even saw what happened when Disney botched an entire park… you can catch up on that story in our in-depth feature, Disaster Files: Disney’s California Adventure.

But compared to Walt Disney Studios Park at Disneyland Paris, that disastrous California mis-adventure was practically a masterpiece. When it opened, Walt Disney Studios was by far the smallest, saddest, most pathetic Disney Park on Earth, draining the energy and investment that remained in the already-forlorn Parisian resort. That is about the change. Less than a decade from now, Walt Disney Studios will be bigger than Walt Disney World's studio park by far, and perhaps more exciting, too. Today, we'll talk a walk through the box office bomb that opened, then see the blockbuster future this park is preparing for.

In the early 1970s and early '80s, the Walt Disney Company was struggling. In the 15 years since Walt’s 1966 death, the company had experienced a period of stagnation and – frankly – uncertainty. What was the Walt Disney Company without Walt Disney? Who would take the reins? Whose vision should the company follow? And indeed, the 1970s had been one of the bleakest times at the company. Hit films were becoming increasingly rare, Walt’s EPCOT city was canned, and the theme parks were being left behind.

You may guess who’s coming next… A pivotal figure around whom many of our Lost Legend and Disaster Files revolve. 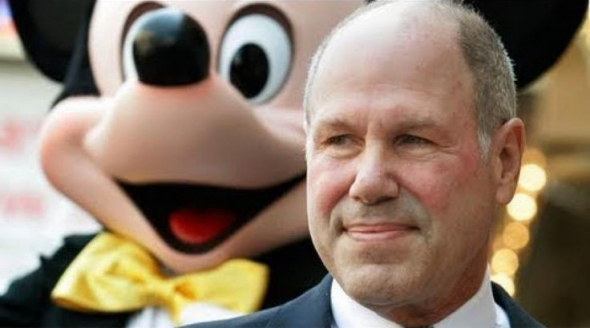 In 1984, Michael Eisner appeared with just the credentials to fix it all. Coming to Disney straight from a time as CEO of Paramount Pictures, Eisner was deeply embedded in the film industry, and quickly set to work turning around Disney’s luck there. He kicked off what’s now known as the Disney Renaissance, returning hit after hit after hit at the box office from The Little Mermaid, Aladdin, and The Lion King to Beauty and the Beast and Pocahontas. Likewise, his media industry savvy saw Disney acquire ESPN and ABC and forge a groundbreaking partnership with Pixar.

When it came time to address the shortcomings of Disney’s aging theme parks, Eisner had a cinematic plan there, too. His unique film-centered résumé gave him three controversial ideas for fixing Disney’s parks, each more unimaginable than the last. Eisner believed: 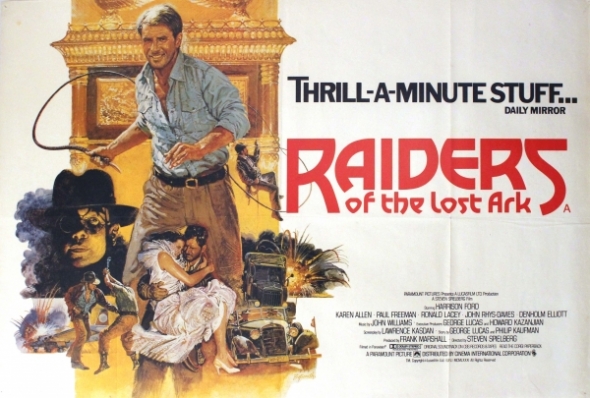 Fresh from his time at Paramount, Eisner had just the connections to breathe new life into Disney parks. Eisner had personally been the one to green light a little concept George Lucas was playing with post-Star Wars: Raiders of the Lost Ark. So Lucas was indebted to Eisner, and eager to work with Disney and bring his growing catalogue along. Of course, audiences of the era couldn’t imagine that a Lost Legend: STAR TOURS (based on Star Wars, distributed by 20th Century Fox) and Indiana Jones (distributed by Paramount) could fit into Walt Disney’s Magic Kingdom, yet they appeared. So did the hip Videopolis dance club, Michael Jackson’s Lost Legend: Captain EO, and, later on, another Disney / Lucasfilm Lost Legend: The ExtraTERRORestrial Alien Encounter. 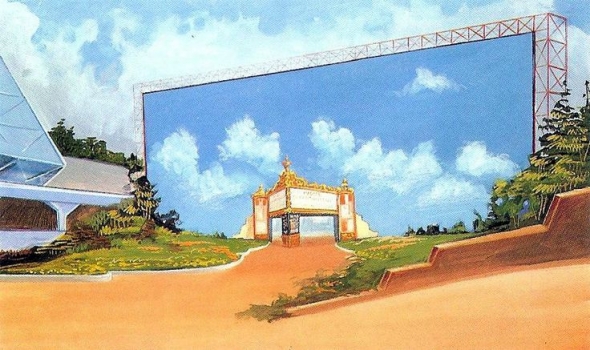 Eisner was so invested in bringing movies to life at Disney parks, he believed that the film industry deserved its own dedicated pavilion at EPCOT Center, and tasked Disney Legend Marty Sklar with developing a movie-centered project. The resulting pavilion was intended to fit between The Land and Imagination in the park's future world, concealed behind a massive blue-sky backdrop. Inside, the pavilion's star would've been (like most of EPCOT Center's pavilion headliners) an all-encompassing dark ride – Great Moments at the Movies – which would transport guests through the most fabled scenes in cinema history.

As the idea grew, Eisner was seized by inspiration… Maybe this oversized dark ride deserved a place of prominence in an entirely new theme park dedicated to filmmaking… 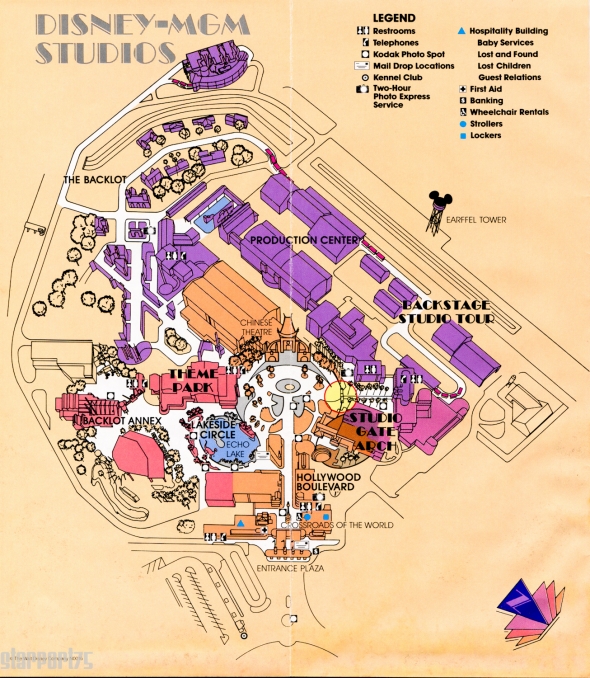 Click and expand for a much larger and more detailed view. Image: Disney

When the Disney-MGM Studios theme park opened on May 1, 1989, Michael Eisner’s dedication was a thoughtful one. He called for the park to be “dedicated to Hollywood - not a place on a map, but a state of mind that exists wherever people dream and wonder and imagine; a place where illusion and reality are fused by technological magic. We welcome you to a Hollywood that never was – and always will be.”

For all the pomp and circumstance, Walt Disney World’s third theme park was small. Very small. On the map above, the "theme park" is made up of the sections in light pink and orange. In total, the Disney-MGM Studios had only two rides. The first was (naturally) the epic dark ride originally proposed for EPCOT Center. But now, that Lost Legend: The Great Movie Ride would be housed in the elegant Chinese Theater recreation that served as the new park’s Cinderella Castle, towering at the end of an idealized golden age Hollywood Blvd… 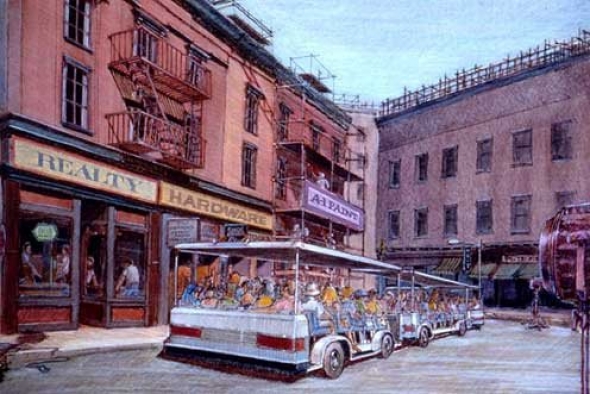 The second ride was the real showstopper: a multi-hour Backstage Studio Tour. Part walking tour, part tram tour, this truly gargantuan attraction (any area in deep pink or purple in the map above) would weave in and out of real working production facilities, soundstages, and demonstrations where actual television and film studios would operate. Guests would view pre- and post-production facilities, watch animators craft Disney’s next masterpiece, and even catch real filming in person!

To be clear, Disney-MGM Studios had been more than a pet project for Eisner. It was also a preemptive strike in an Orlando arms race. Eisner knew through his time at paramount that Universal Studios was planning its own theme park for Orlando meant to rival Disney World, so Eisner rush-ordered a movie park of his own to ward Universal away. What’s worse, Disney had effectively stolen Universal’s bread and butter – its famed Hollywood Studio Tour. Ultimately, Universal won out. Instead of duplicating their own Studio Tour in Florida, they simply split up its components into separate, standalone rides… Lost Legends: Jaws, Kongfrontation, Back to the Future: The Ride, and more.

The plan was brilliant! Disney-MGM Studios was a brave, unique new theme park concept... and it just so happened to be perfectly adaptable to Disney’s newest project: a resort in Europe. Read on…

Great Article, i absolutely argee with you. I don't get why The Walt Disney Company/ Disney Imagineering do have so much trouble, to come up with a great Idea to make WDS a Beautiful Park.

I have to say, i do find it very easy to make something amazing out of it. Front Lot, Production Courtyard and Backlot melt into one big Hollywoodland, behind R'n'Rc will be Star Wars Land, right of it Marvel Land and the rest Pixar Land and in the middle of The Park a giant Lake. Sure, i could explain it in detail, but that would be as long, as your Article.

Great article and I agree with all however currently on Trip Advisor it is currently number 1 in Marne-la-Valley out scoring Disneyland Paris!!!!

I totally agree with your assessment of this park. I know it very well as I go every 2 years. It is lacking in magic compared to the main Disneyland park in Paris and particularly the Florida & California parks, and I think you've hit the nail on the head as to why. The horrible boxy studio buildings and lack of theming and immersive lands. The comparison of the two carpet rides in the article was striking! Like you said, fountains under one and concrete under the other! Wish they would do what you've said and close a section at a time and re-do them to be immersive themed lands. Starting with that horrible studio 1 entrance building! Still love the park though but just feel it could be so much better, compared to other Disney parks I've been to. Certainly a lot better now with all the additions, I particularly love crush's coaster and Tower of Terror, and Ratatouille was smart. My little boys adore the cars race rally ride and the toy story rides. They are getting their first taste of Orlando Disney magic next year, so excited, it's a whole other level to Paris.

What a great review.
Actually The WDC was obliged by contract to build a second park ten years after opening the first park. Also a third park was part of the contract with the French government but I think that was renegotiated.
What I find extremely depressing is that these problems have been around since 2002, fifteen years and there have no plans been announced for any expansions or improvements of the park. Meaning, even if they'd publish any plans, due to the fact that the current refurbishment plan runs till 2022 we won't be seeing any improvements of the park before 2025-2027. Meaning there is no reason to visit this park for almost another decade!
Also the original DLP park has been refurbished to look great for its 25 anniversary but this park too has not received any new large attraction for over 10 years.
I really don't think it's going to work this way. Especially since the other large european themeparks are churning out amazing attractions year after year.