Disney's "Worst Ride Ever" Was So Hated, It Closed After Just One Year. This is Why. 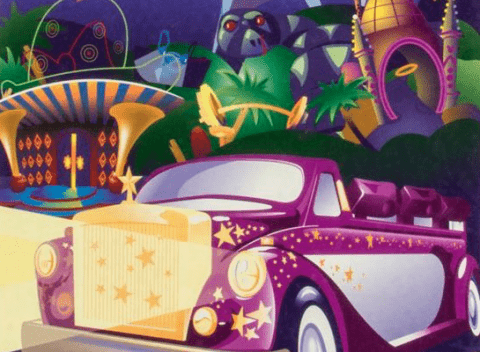 Ready to peel out on a high-speed race through Hollywood? Or perhaps you'd prefer a journey through the cinematic classics that shaped generations in an epic dark ride? Maybe instead you’d like a laugh-out-loud, comic dark ride through the entertainment industry? There are dozens of intriguing and incredible ways to build a ride around the concept of Hollywood.

No matter what you’re looking for from a Disney dark ride, you aren’t likely to find it in Superstar Limo. Often regarded as the worst dark ride Disney has ever created, this short-lived monstrosity spent more time in development than it spent open for guests! Irreverent, unfunny, instantly dated, and creatively starved, Superstar Limo was more than just a one-off accident; it was the anchor of an entire creative concept that nearly killed Disney’s California Adventure.

Here at Theme Park Tourist, our comprehensive In-Depth Collections are fan-favorites that tell the complete stories behind beloved Lost Legends, unbuilt Possibilitylands, and spectacular Modern Marvels. But one of our series is a little more disastrous. Declassified Disasters chronicle the unfortunate tales of the darkest moments in theme park history, like the 90s-drenched Enchanted Tiki Room: Under New Management, the frazzled Rocket Rods and Tomorrowland 1998, the demolished DisneyQuest, and the king of all Disney disasters, Stitch's Great Escape.

Today, we return to the West Coast for another installment sure to make you cringe. The story of Superstar Limo – that it actually got built – is nearly unbelievable. How could Disney abandon its careful storytelling, character, and detail for a disastrous dark ride into Hollywood’s worst puns, populated by C-list actors?

There’s only one way to find out. Let’s ride on.

Superstar Limo – or something like it – existed from the earliest concepts of Disney’s California Adventure. You can catch up on the full, in-depth, incredible story that lead to Disneyland's infamous second gate (and its fall and rebirth) in our in-depth Declassified Disaster: Disney's California Adventure feature, but here’s what you need to know...

When Michael Eisner took over the Walt Disney Company as CEO in the mid-1980s, he had brave and ambitious ideas to grow Disney’s lagging theme parks and studios that had languished for decades. Under Eisner’s watch, parks began to grow creatively and commercially as Star Wars, Indiana Jones, MGM, and CBS forged partnerships with Disney, and the great Disney Renaissance began to revive the company's animation and live action studios.

At this time of great and unprecedented growth, Eisner decreed the start of the Disney Decade, with the opening of new parks at each Disney Resort around the globe, including an unheard-of plan to add a second gate at the tiny, miniscule Disneyland that had been a local gem, evading the expansion that had made Walt Disney World into an international destination. It was official: Disneyland would be joined by an ambitious 21st century sister park called Westcot (with all the details contained in the feature linked above). 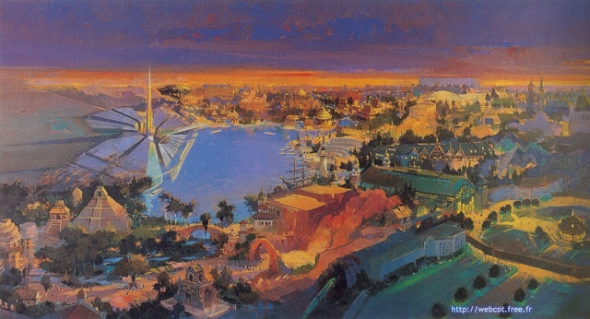 But Eisner’s optimism and enthusiasm began to wane… Faced with a ballooning price tag for the ambitious Westcot and bludgeoned by the dismal debut of Disneyland Paris, Disney executives reeled. Eisner infamously became wary of any large-scale expansion, slashing projects across the parks, surrounding himself with financial analysts, and freezing spending (which would in turn create a decade of dismal and wrenching treatment of the parks from which they’re only now recovering.) 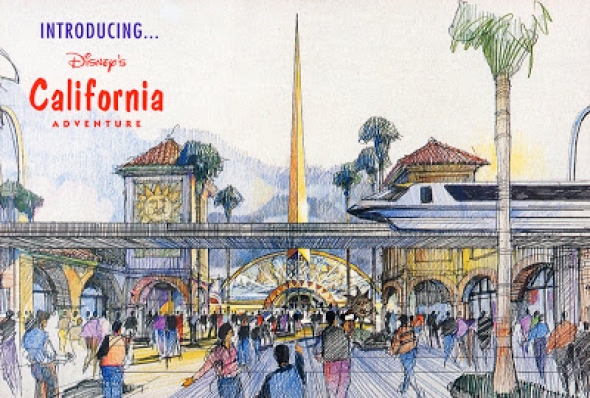 The idea of a California-based theme park was born. And that notion – that the park could “stand-in” for the rest of the state for tourists – is probably at the heart of the concept’s later collapse.

In a park based around California, there’s much to explore. And that was kind of the point. “California Adventure” could encompass snowy mountain peaks, white sand beaches, redwood forests, bustling cities, and cultural wharfs – natural ingredients for themed “lands!” The park practically designed itself conceptually. As early as 1996 (above), the park began to take shape around a towering golden spire.

So fast forward to early plans that called for a Hollywood-themed “land” to populate the new park. A natural fit. Sure, Eisner’s Disney-MGM Studios (now Hollywood Studios) at Walt Disney World had been a dichotomous park – half immersive, idealized, romanticized streets of Hollywood forever locked in its Golden Age of the 1930s and 40s; half behind-the-scenes access, towering tan showbuildings, and façade-lined avenues and commissaries. Disney could do both.

However, the Hollywood land at California Adventure would be neither, instead recreating modern (well, 2001’s modern) Hollywood with all the stardom, celebrity, smart phones, cheetah-print, reality TV, and red carpets that went with it. After all, if guests were going to cut their Disney visit short to see modern Hollywood, than it was modern Hollywood that Disney needed to bring to them. 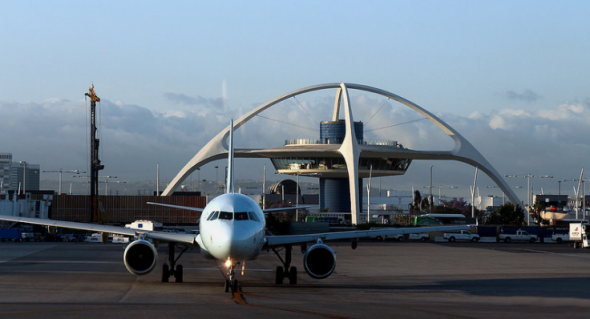 So early plans for this Hollywood zone included a scaled recreation of Los Angeles International Airport’s famed Theme Building – the mid-century modern, white, Googie-influenced building between LAX’s terminals that had become an icon of the city. The towering recreation of the Theme Building would fill tourists with the same thrill and awe they’d experience landing at LAX and realizing they were indeed in the City of Angels, ready to become movie stars themselves. (Even better, a then-recent renovation in 1997 had seen Walt Disney Imagineering hired to design a new restaurant for the Theme Building’s saucer, and a recreation of that restaurant in California Adventure’s tower could be a highly-sought-after dining experience!) 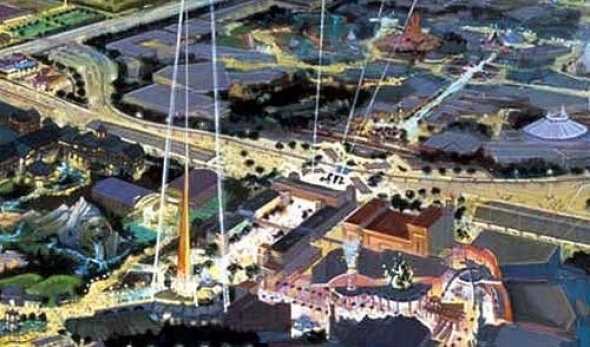 In any case, guests would enter the Hollywood area’s signature ride under the Theme Building recreation, feeling as if they’d just landed in Los Angeles as the newest, hottest celebrity in town. As they’d board purple stretch limos, Michael Eisner himself would appear via in-cab monitors to goad guests for being late to their own movie premiere. Eisner would reportedly remind them that they still hadn’t signed their contract, and that if they could make it to the red carpet at the Chinese Theater in time, he’d be there in person to sign them onto Walt Disney Studios’ newest picture and make them into stars.

But, he’d warn, lookout for the paparazzi. They’re out in full force today. Don’t do anything to embarrass yourself. To hear Disney expert and analyst Jim Hill say it, what followed would’ve been a madcap ride through Hollywood, zigging and zagging to avoid the flash of the paparazzi en route to the Chinese Theater.

Don’t misunderstand though – this would not have like Florida’s Rock ‘n’ Roller Coaster. Instead, picture something along the lines of Mr. Toad’s Wild Ride taken a step further, with larger vehicles and banked turns (which Walt had envisioned for Toad, anyway) on a truly ridiculous ride through Hollywood, with flashing paparazzi cameras at every turn. 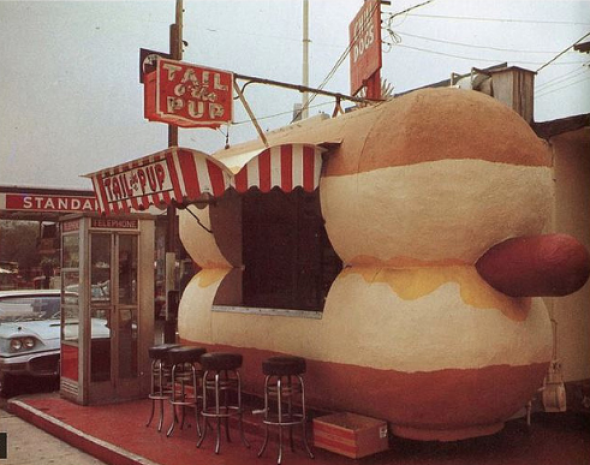 On and on it would go, weaving through blacklight scenes and darting left and right to escape the flashes of paparazzi cameras through Los Angeles’ tunnels, visiting iconic Southern California locales all in one ride. In retrospect, we can see that this version of the ride wouldn’t have stood the test of time, either. If it were built exactly as Imagineers first planned, it still wouldn’t have survived the massive rebuild that eventually came to California Adventure, where the LAX Theme Building would have no place at all in a 1930s Hollywood. However, we can admit that this version of the ride would’ve featured some truly unique and clever gags. But it was never built for good reason… The entire concept was doomed after one fateful event shocked the world…

Thank you so much for posting this. I visited DCA on opening month for the first time on February 2001. I was only 8 at the time, and I wanted to ride Superstar Limo, but it was closed.

But now, looking back on it, and with the negative reception it got, I can say that I'm glad I missed it! :)

I rode Superstar Limo on DCA's second day of operation. Nobody was in the park, and there was no wait at all for it. It was indeed dumb and completely pointless, but it wasn't that much worse than some other things in the park. Steps in Time at the Hyperion was just awful, and the Maliboomer was as un-Disney as an attraction can get. At least Superstar Limo had some theming.

I was at California Adventure on opening day and many times that first year...Yeah, Superstar Limo was dumb, but it was kitschy and fun, like a lot of what most of us native Southern Californians know Hollywood REALLY is...kinda sleazy, too, that this thing made it into the opening day lineup....your disdain for the park does not match my own, though...I have always loved this park, despite the flaws and, even on opening day, it featured at least six really top notch attractions to me; California Screaming, Grizzy River Rapids, Soarin, Animation, and the two Orlando transplants (Tough to be a Bug and Muppets)...park is much improved now but was very lovable even those first years

Am I the only one excited for gaurdians of the galaxy mission breakout?

I dunno--I watched the video of the ride and it looked like fun. Not the kind to wait in a long line for. Maybe a 10 minute wait.