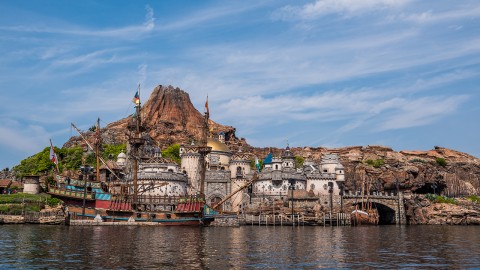 Don’t misunderstand: there are plenty of rides that are so definitively Disney, it’s hard to imagine a (Disney) world without them. But our goal today wasn’t to select the “best,” the "biggest," the "coolest," the “most classic” or even our “favorites,” but to choose the far-flung, one-of-a-kind, historic-or-modern masterpieces that are… well… rare; aspirational; sought-after; goals! So don’t feel bad if you haven’t gotten close to completing this list yet. Instead, add our “bucket list” picks to your list of rides worth daydreaming about… and maybe one day, booking a flight for.

How many of our “bucket list” attractions have you experienced firsthand? Which Disney Parks attractions top your "bucket list?" Which parks do you daydream of visiting, and what do you think will be your first stop when you finally get there? There are plenty to choose from, and absolutely no wrong answers!

Most of our readers have probably checked this one off of their Disney Parks list. In fact, you may even be tired of it. But on behalf of Disney Parks fans who don’t frequent Orlando’s Walt Disney World Resort, please know just how lucky you are to have enjoyed this ultra-classic Imagineering marvel straight from the 1964-65 New York World’s Fair.

Walt is known to have called the Carousel of Progress his personal favorite attraction, and it’s easy to see why. It expertly merges his love of technology and progress with the incredible (and then cutting edge) humanoid Audio-Animatronics figures Imagineering had pioneered. Add in a dash of his favorite songwriting duo, the Sherman Brothers, and voila! As a matter of fact, we chronicled the classic tale of this fan favorite in its own standalone feature, Modern Marvels: Carousel of Progress – a must-read for Disney Parks history buffs.

Could Carousel of Progress use a little reconfiguring a quarter-century out from its last update? Oh yeah. (And we propose a heck of an idea in that in-depth feature…) But this is holy ground for Disney Parks fans, and whether you’ve seen it in New York, Anaheim, or Orlando, you’ve seen a Walt Disney original face-to-face. And before you ask, yes, the Modern Marvel: The Enchanted Tiki Room would fit nicely in this spot, too... but remember, we're talking "bucket lists." And since three variations of the Tiki Room exist around the world, it's a little less aspirational than Carousel, which is currently a Florida exclusive.

For most Disney Parks aficianados, Tokyo Disney Resort tops the list of daydream destinations... And for a sizable portion of that crowd, there's one particular ride at Tokyo Disneyland that feels like a must-see, first-stop kind of experience: Pooh's Hunny Hunt. Casual tourists to Disney World or Disneyland might not get the big deal... After all, both U.S. resorts feature Winnie the Pooh ride-through dark rides presented in "traditional" Fantasyland style. But Tokyo's ride is much, much more.

In fact, Pooh's Hunny Hunt was the first ride to use Disney's LPS (local positioning system) ride style, wherein multiple vehicles enter a dark ride together, passing from room to room with no track in sight. In Pooh's case, trackless "hunny pots" set off into the storybook pages of the Hundred Acre Wood. But through the brilliance of this 21st century ride system, those hunny pots can then split up, diverge down different paths, spin, reverse, bounce, and even dance around one another in near-miss synchronization. It all comes to a head in Pooh's "Heffalumps and Woozles" nightmare where two total chaos ensues, intermixing batches of vehicles as they dance to and fro, pulling away to experience side encounters and even do-si-do'ing with a hunny pot full of woozles!

Tokyo Disneyland actually has a trio of high-tech dark rides that can only be found at the Japanese park (made of Pooh's Hunny Hunt, Monsters Inc. Ride & Go Seek, and the Enchanted Tale of Beauty and the Beast), but Hunny Hunt is almost certainly the park's signature ride. And as its typical multi-hour waits will demonstrate, it's popularity hasn't waned in two decades... for good reason.

For modern Disney Parks enthusiasts, nighttime spectaculars are so ingrained in parks’ DNA, it’s difficult to imagine a time without them. Yet for all the high-tech, accessorized, precisely-plotted shows developed to jerk tears from the eyes of onlookers, there’s perhaps none that’s met the high water mark of Disneyland’s Fantasmic.

There’s something about the show that just can’t be put into words… the lights of New Orleans Square flickering out as the evergreens of Tom Sawyer Island begin to glow… That distant whistle in the air… The crescendo as Mickey himself appears, slowly, steadily stumbling across his control of light, sound, fire, and water… The show is practically abstract, set only in the boundless realm of imagination as music, magic, heroes, and villains clash, culminating in a battle with a 60-foot Audio-Animatronic dragon and then, one of the most heart-wrenching musical finales in any Disney product of any kind, ever.

It’s a show that cannot be cloned, despite half-hearted efforts at Disney’s Hollywood Studios and DisneySea. Fantasmic is a work of art. And even if fans largely seem to agree that a 2019 “upgrade” (swapping a few key scenes and adding projection mapping) added more distraction than clarity, the fact remains that this show must be seen to be believed.

13. Guardians of the Galaxy - Mission: BREAKOUT!

Pretty much the opposite of Carousel of Progress in every measurable way stands Guardians of the Galaxy - Mission: BREAKOUT! And while you may count yourself among the crowd who objectively recognizes that the Lost Legend: The Twilight Zone Tower of Terror was a better fit for Disney California Adventure in the long run, not even the fiercest critic of the superhero takeover would ride it arms crossed and pouting.

The truth of the matter is that, in transforming the park’s lost Hollywood Tower Hotel into the conspicuously art-deco-influenced Collector’s Warehouse, Disney Imagineers did something you really have to see to believe. By repurposing the strengths of the park’s (admittedly) value-engineered drop ride, Imagineers managed to rewrite the rules that Tower of Terror had laid. Riders launch into a bounding, bouncing, laugh-out-loud adventure that’s filled with ‘70s rock music, screens, and Marvel’s fourth-wall-breaking “irreverent” super hero team.

You don’t have to love the look of an industrial prison of pipes and satellite dishes looming over the park’s picturesque Buena Vista Street and Hollywood Land to acknowledge that Guardians of the Galaxy - Mission: BREAKOUT! is a contrived-but-creative project. Will it still seem like a good decision in ten or twenty years when the super hero hype has died down and Guardians has been rebooted? Probably not. But luckily, with a few screen swaps, the ride can change to whatever hero is next. And frankly, that was probably the plan all along. In any case, Guardians is a ride that every fan should have on their bucket list…

How could you leave Incredicoaster out of there? It’s the most thrilling coaster in the entire Disneyland Resort! Not to mention fans say the new theme fixes the previously story-less coaster!

How could you not mention the Peoplemover?