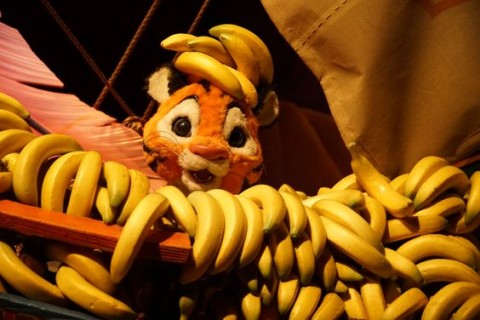 There was a time when Imagineers just made stuff up. No, seriously.

Given just how long it’s been since each Disney Park added an intellectual-property free ride, it can be tough to even member that some of Disney’s most memorable, iconic, and beloved characters haven’t come from movies at all, but from the minds of Imagineers! Years ago, we took a look at some of our favorite “Original Characters” – animals, aliens, and androids created just for Disney Parks! – and frankly, that list holds up pretty well...

But today, we wanted to put a new spin on our look at how many cool characters can spring from the minds of Imagineers – characters you may never have even seen in person, because they exist only at Disney’s parks outside the United States! From one-off creations to inhabitants of expanded universes, these characters were created just for Disney’s overseas parks. The question is, which – if any – would you like to see come to the American parks, and how?

When Disney Parks make their way overseas, they often have to be “translated” to make sense in their new contexts. Disneyland Paris is a prime example. There, even Disney “classics” were reimagined for a European audience who’d find little to connect with in a park dedicated to “the dreams, the ideals, and the hard facts that have created America.” Take the Lost Legend: Space Mountain - De la Terre á la Lune that launched riders into a literary, fantasy journey to the moon and back… or, even odder, the story of the park’s Haunted Mansion.

In Paris, the Manor took on its first authentically new form. Relocated to Frontierland, the ride was wrapped into a Western Epic frame story, connecting the haunting happenings within to the mythology of Big Thunder Mountain and the town of Thunder Mesa. We dove deep into the ghostly retelling in our Modern Marvels: Phantom Manor feature, but one of the most interesting characters to come of the reimagining was Melanie Ravenswood – the French analog to what American guests know as “The Bride.”

The entire story of Phantom Manor revolves around the tragic Melanie, whose doomed love affair with a Big Thunder miner spells the end of the Ravenswood line, severing their waterfront mansion from the town, and cursing any who step inside. Our journey through the mansion isn’t a "frightfully funny" singalong; it's a dark, epic, operatic trip into Melanie's mourning. The veiled bride is seen again and again in the misty halls of the rotting mansion, always with the glowing eyes of her tormenting Phantom over her shoulder. Throughout the ride, we witness Melanie's descent into madness; her hopeless attempts to escape the mansion's haunting until she herself becomes the home's eeriest inhabitant.

By layering a narrative onto the trope of the Haunted Mansion bride, Imagineers transformed the ride completely and turned it into a creepy character study. Melanie's story may be a dark one, but it's a great example of what Imagineers can create when they're invited to think outside the box, add their own spin on "classics," and create compelling, rich characters from scratch!

Tokyo DisneySea is often regarded as the best theme park on Earth, and for good reason. Opened the same year as the Declassified Disaster: Disney’s California Adventure (and costing literally five times the price to build), the epic, nautical park is filled with unimaginable environments and some very smart build-outs of classic rides. One of the park’s original attractions, though, was Sinbad’s Seven Voyages, a 10-minute cruise through the legendary exploits of the hero from One Thousand and One Nights.

Trouble is, the boat ride was downright scary. Set adrift in the ride, guests were terrorized by sirens, attacked by a giant Roc Bird, nearly crushed by a giant, and threatened by spear-wielding monkeys. In 2007, the ride was reimagined as Sinbad’s Storybook Voyage, recasting its terrors as helpers on Sinbad’s quest singing along to “Compass of Your Heart,” a song written by Disney Renaissance songwriter extraordinaire Alan Menken. But the surest sign that something had changed within was Sinbad’s new sidekick, Chandu.

The adorable tiger cub can now be found throughout the attraction, always at Sinbad’s side and ready for adventure. What’s more, the mewing character has become a sort of icon for DisneySea and its Arabian Coast land. Chandu can be found as a plush, on apparel, and even in snacks – the striped “Chandu Tail” bao bun snacks are a must-try. Arguably, Chandu remains one of the “lesser-known” overseas characters if only because another Parks originals designed for Tokyo DisneySea has become even more iconic…

Though it may be hard for U.S.-based parks fans to imagine, there are several Disney Resorts out there where Mickey Mouse practically plays second fiddle to… a teddy bear. Despite being a character icon of Disney’s resorts in Asia, “The Disney Bear” actually debuted at Walt Disney World’s Downtown Disney in 2002. It wasn’t until 2004 that the Oriental Land Company – owners of Tokyo Disney Resort – imported the bear to Tokyo DisneySea with a nautical new backstory (a teddy bear created by Minnie and given to Mickey to accompany him on his voyages across the Seven Seas) and a new name: “Duffy.”

To say that Duffy is a sensation would be an understatement. The little brown bear with a Mickey silhouette for a paw print is omnipresent. At the Tokyo Disney Resort, entire stores are stocked only with Duffys and thousands of interchangeable outfits for him. Visitors of every age carry the bears around, positioning them at Duffy-sized photo spots around the parks to document Duffy’s travels. Duffy adorns purses, clothes, shirts, shoes, busses, and monorails; meet-and-greets garner multi-hour waits; nearly all of Tokyo DisneySea’s Cape Cod area has been reimagined as a headquarters for the character!

Given the immense, overwhelming success of Duffy, it’s easy to see why Disney made an intentional attempt to recreate the character’s success back in the U.S. In 2010, Duffy began meet-and-greeting in Epcot’s World Showcase and Disney California Adventure’s Paradise Pier… But for whatever cultural reason, Duffy just doesn’t connect quite as well with American and European audiences!

Meanwhile, overseas, an entire “Duffiverse” has evolved around him. From Tippy Blue the seagull mailman to Duffy’s sweetheart, Shellie May the pink-tinted bear; Gelatoni the artistic green cat to Stella Lou, the dancing bunny… Hong Kong Disneyland introduced its first homegrown “Friend of Duffy” in 2018 with Cookie Ann, a yellow dog with a chef’s hat who calls Main Street, U.S.A. home! A source of immense delight and joy for hundreds of thousands of guests at Disney’s resorts in Asia, Duffy and Friends are a world all their own...