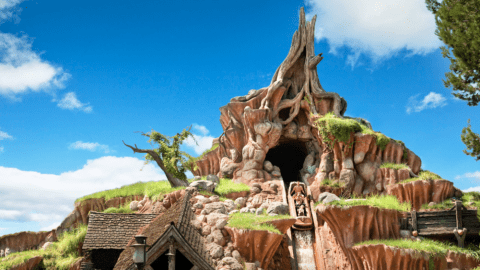 "Disneyland will never be complete, so long as there is imagination left in the world." How many times have you heard that quote as a reason for closing a classic or adding an attraction somewhere that doesn't quite make sense? The truth is, Disney Parks are organic places! For better or worse, things will always be changing; rides will always be swapping in and out; if you don't like change, Disney Parks fandom may not be for you!

But sometimes in Disney's rush to incorporate new attractions, add capacity, or infuse hot properties fast, we might end up with some rides that are simply in the wrong places! Below we've collected a list of eight attractions – both classics whose contexts have changed wildly over the years, and contemporary attractions added to existing lands. Most guests probably don't even notice these rides "in the wrong places;" those that do probably don't care. Do you? What other attractions can you think of that technically don't make much sense in the lands they inhabit? Where should they go instead?

Dumbo the Flying Elephant has been a mainstay of Fantasyland since 1955. It's an opening day attraction at every "castle" park on Earth – even Shanghai! The aerial carousel was a simple carnival ride redressed with fiberglass elephants, but it was enough of a hit to inspire Tomorrowland's typically-elevated version of spiraling rockets found in almost every Disney Resort. But in 2001 – in the midst of the same budget-crunching era that created the Declassified Disasters: Disney's California Adventure and Walt Disney Studios and saw characters shoved into classics – it was decided that Magic Kingdom needed another one.

2001's Magic Carpets of Aladdin is, of course, a fine ride that adds fun (but familiar) family capacity to the number one most visited theme park on Earth. Unfortunately, it was quite literally plopped down in Adventureland. Unlike Disneyland's version of the land which is a more or less immersive with a single time period and setting, Magic Kingdom's has always had a lot going on... from the African outpost of the Jungle Cruise to its Polynesian core and the Caribbean Plaza that serves as the entry to Pirates, each sub-area still had something in common: they looked camera-ready, immersive, and "real."

Naturally, the introduction of a color-saturated carnival ride in a new makeshift Arabian plaza with spitting gold camels somewhat detracts from the ambiance, aura, and atmosphere of Adventureland. Plus, with the duplication of Dumbo as part of the New Fantasyland project in 2012, Magic Kingdom now offers four virtually identical carnival rides... maybe it's time for a change?

Our recommendation: Remove it.

2, Autopia and the Tomorrowland Speedway

Though it's often laughed at today, the truth is that Disneyland's Autopia did make sense in Tomorrowland when the park opened... after all, President Eisenhower had not yet signed the Federal-Aid Highway Act that would create a 41,000-mile network of interstate highways spanning the nation. Disneyland's cloverleafs, on-ramps, and elevated highways were legitimate demonstrations of transportation of the future.

Since then, the Autopia has grown and merged into its current form: a sprawling, snaking, lovely drive through acres of parkland (actually set atop the massive showbuilding of the Submarine Voyage). So even if it's not exactly futuristic, for generations of Southern Californians, Autopia was their first time behind the wheel! Of course, removing the Autopia and Subs would open a massive expansion plot in the land-locked park, almost certainly assuring its time is short... and even fans who love the family-favorite Autopia salivate over a New Tomorrowland or New Fantasyland (or both!) that could fit there...

Our recommendation: Surely there's a perfect fit for a family car ride: Cars Land! In fact, a family road trip past Route 66 sights, across bridges, and through car washes was once planned for the park's expansion... until it was upgraded into the Modern Marvel: Radiator Springs Racers. Still, a family car ride would make great sense in Cars Land, if only there were space...

3. Guardians of the Galaxy - Mission: BREAKOUT!

Speaking of Disney California Adventure, the $1.5 billion redesign of the park from 2007 to 2012 didn't just debut Cars Land; it also rewrote the story of the rest of the park, at last emphasizing historic, idealized Californian lands anchored by three distinctly Californian E-Tickets. Oddly, all three have been given character overlays in the years since! It's odd that Disney would spend billions to add more California to California Adventure, only to then shutter the Lost Legend: The Twilight Zone Tower of Terror in favor of Marvel's Guardians of the Galaxy.

Recognizing the disconnect of Sunset Blvd. ending in a super villain's hotel-shaped secret lair affixed with pipes and satellite dishes, Imagineers asked fans for patience, promising that it would all make sense in the context of a coming Marvel-themed land. But for three years, the park's Hollywood Land (ostensibly themed to the 1940s Golden Age of Tinseltown) was reigned over by a "warehouse prison powerplant" based on "the beauty of an oil rig!"

Our recommendation: No recommendation needed. 2020's Avengers Campus at last gives Mission: BREAKOUT! a home (even if it still doesn't make great narrative sense why the Collector's space museum would appear in a Southern Californian recruitment center for heroes). The bigger issue is that, with the ride's official annexation, Hollywood Land will be left with just three significant attractions: a Monsters Inc. dark ride, Frozen: Live at the Hyperion, and an embarassing installation of Mickey's Philharmagic in a theater meant to show the much-better Muppet*Vision.

Speaking of Muppet*Vision, the original show back at Disney's Hollywood Studios is still going strong... and it should be, given that the ultra-quotable classic was also the last project overseen by Jim Henson before his unexpected death. Muppet*Vision is pure classic from beginning to end. It's also never really found the home it was meant to. After all, it was initially supposed to be just one part of the never-built Possibilityland: Muppet Studios once planned for the park. After Henson's death, the project was cancelled by his family.

Instead, Muppet*Vision was grouped into New York Street (later, the Streets of America) – one of the "Lost Lands" that disappeared entirely from Disney Parks thanks to the opening of Star Wars: Galaxy's Edge. Somehow, Muppet*Vision survived (even precariously placed between Galaxy's Edge and Star Tours... gulp), and the remains of the land around it were even renamed Muppets Courtyard!

However, once the portal to Batuu opened, Muppet Courtyard was renamed Grand Ave. after the trendy Los Angeles neighborhood... even though Muppet*Vision and the neighboring PizzeRizzo recreate New York. Huh... The only part of Grand Ave. that's new or different from Muppet Courtyard is the BaseLine Tap House bar. Still, the mini-land is mostly-Muppets and mostly-New-York-themed, making its refusal to admit either somewhat odd.

Our recommendation: Look, Grand Ave. exists almost entirely as a thoroughfare to guide guests into Galaxy's Edge. Why shouldn't the land be renamed Muppet Studios, absorbing the bar into an after-work pub and grill for Muppets?

Great article! So many of these rides have bothered me because of the theming not working with the land they are based in. I think the Magic Carpets of Aladdin would actually fit better in the Morocco Pavilion in Epcot than in Adventureland, and it would offer another crowd absorbing attraction in a park that has so few. Although you mentioned Monsters Inc. Laugh Floor not working in Tomorrowland, I think the Mike & Sulley to the Rescue ride in Hollywood Land (DCA) makes even less sense. What's challenging is finding Disney properties that fit the theming of Hollywood Land, I would propose re-theming that area altogether.

You're totally right. As DCA's Hollywood Land currently exists, it's enough of a "blank canvas" that it doesn't seem like anything does or doesn't fit; it's just... empty... Haha. It's just a catch-all, so having random IPs mashed in feels like it's less offensive than in Tomorrowland.