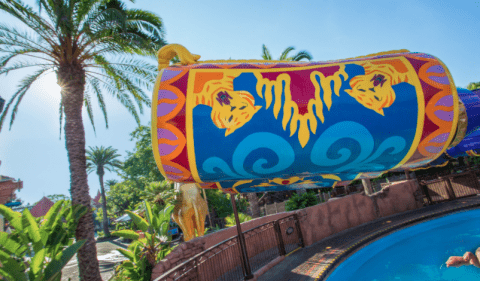 Modern civilization has never seen an event quite like the COVID-19 pandemic, tearing through the world during winter and spring of 2020. For the first time in history, every single Disney Park on Earth is completely and totally closed in a desperate bid to reduce the transmission of a highly-contagious virus for which no vaccine has been developed. Even as humanity inches toward a life after COVID-19, on our horizon today is a world entirely unlike that which we left behind; one where major changes are in store for theme parks.

Now, to be clear, we don’t yet know what effect the COVID-19 pandemic and the extended closure of every Disney Park on Earth will have on parks’ eventual operations; frankly, the solution to the Walt Disney Company and Comcast’s staggering financial losses will be complex and multi-faceted, likely taking place largely away from the view of customers. Cost-cutting in the theme parks is merely one potential tool that could take many forms itself! We're certain: the fallout of COVID-19 will not be one ride closing at each theme park to save on operations and payroll. Far, far from it.

But it did make us wonder – if Disney and Universal Parks HAD to cut one ride from each park’s lineup, which would we choose to sacrifice? If each park re-opened with one ride having suddenly disappeared, which would you approve of losing? Now since it would be too easy to doom a show, walkthrough, or exhibit, we’ll keep ourselves honest by only selecting from bona-fide rides, as defined and listed in our must-read Ride-Count Countdown. In other words, choosing only from attractions where guests take a seat and move. See if you agree with our candidates for removal...

While Disneyland in California surprisingly features more rides than any other Disney Park on Earth, it also has a lot to lose. A staggering number of the park’s rides are honest-to-goodness Opening Day “Originals,” which means their DNA was shaped by Walt himself. Meanwhile, many of the park’s newer attractions are major anchors (and trust us, the tiny little park offers more certifiable E-Tickets that you might expect).

If leaders decreed that one of the park’s hefty ride count needed to disappear to save on maintenance and staffing, the choice would be tough. Frankly, axing Davy Crockett’s Explorer Canoes feels like a cop-out given that most other Disneyland-style parks got rid of their versions of the guest-powered, cast-heavy attraction long ago. But given the life and energy this (sometimes seasonal) attraction gives to the Rivers of America, we’d prefer to keep it and celebrate it as one of those “special” hidden gems Disneyland tends to keep around.

VOTED OUT OF DISNEYLAND: We have to vote off the Storybook Land Canal Boats. Almost dating to opening day, this tranquil cruise past miniatures of famous settings from Disney stories is a charming, spectacular hidden gem in its own right. But it’s also incredibly low capacity and requires heavy staffing thanks to live on-ride narrators (two issues solved in Disneyland Paris’ version of the ride). But even more, it takes up a very key piece of valuable real estate that serves as one of the park’s primary expansion pads… So its short-term loss now could actually open a great door in the future.

Magic Kingdom’s ride lineup is basically “Castle Park 101.” It’s got a very strong collection of classics that have become the blueprint for every other castle park going forward. Though it has (spoiler alert!) fewer rides and fewer E-Tickets than Disneyland, that makes choosing a single sacrifice even harder. After all, every ride in the park’s lineup feels “essential” in its own way… except for one.

VOTED OUT OF MAGIC KINGDOM: Frankly, we wouldn’t just vote Magic Carpets of Aladdin out of the park; we’d chuck it into the volcano ourselves. And sure, we understand – this aerial carousel was clearly added because Disney’s evaluation suggested there was need for it given the immense popularity of Dumbo and the Astro Orbitor. But of those, Dumbo is original and iconic while Astro Orbitor add the unique twist of spiraling high above Tomorrowland.

While we're all for Aladdin representation in the parks, The Flying Carpets of Aladdin breaks up the otherwise beautiful and romantic Adventureland with a random technicolor carnival ride and haphazardly jams an Arabian market backdrop into the Polynesian courtyard that once was. It’s like putting a Toy Story-themed tilt-a-whirl in Frontierland! What’s more, the Flying Carpets were made even more redundant by the doubling of Dumbo in New Fantasyland, bringing Magic Kingdom’s spinner count to four.

As we move into Walt Disney World’s other theme parks, choosing a single sacrifice becomes tougher if only because subsequent parks have fewer rides to choose from. In fairness, Epcot is sometimes lovingly derided as the “best park with the worst rides” at Disney World. If you’ve read through any number of our Future-World-centered Lost Legends, you know why. Today, the park is mostly made up of ‘80s rides with character overlays and brainless thrill rides. In other words, we couldn’t sacrifice one of Epcot’s famous, epic dark rides if we wanted to – they’re (almost) all gone anyway!

Out of the eleven rides Epcot hosts, some of the best “contenders” to be booted are probably the Omnimover inside of The Seas and Living With the Land inside of the Land… but getting rid of either would eliminate much-needed family potential at the park and squash some of the few call-backs to Epcot’s intellectual origin.So we can’t in good conscience recommend closing either.

VOTED OUT OF EPCOT: So, though we hate to do it, we’d have to vote out Journey into Imagination with Figment. It’s no surprise to Imagineering fans that the attraction – once the Lost Legend: Journey into Imagination – has been in a depressing state since 2001 (when the lovable original character Figment was added back in after a cataclysmic reimagining two years prior). While the ride’s closure would probably add even more confusion as to why Figment is all over Epcot, it might also pave the way for a true reimagining – strangely, one of the few things not confirmed for Epcot’s upcoming multi-year transformation!

There was a time when Disney fans accused Hollywood Studios of being Disney World’s resident “half-day” park – one of the cruelest things you can label a theme park! In just the last few years alone, the tables have turned tremendously. Today, the park offers 9 rides, and frankly, we’d classify all but one as E-Tickets! So while Hollywood Studios may still have fewer rides than most Disney theme parks, it probably has the highest E-Ticket ratio.

VOTED OUT OF HOLLYWOOD STUDIOS: That makes this fairly easy. In theory, we’d vote out the one ride that isn’t an anchor attraction: Alien Swirling Saucers. The turntable-based family flat ride has become the “new Dumbo,” appearing across Disney Parks with different character overlays each time. And while the chaotic, whipping ride is fun, it’s also relatively simple – a "lightly dressed" amusement park ride.

But that’s why this decision is actually complicated… As our in-depth look into the disaster of FastPass+ shows, a park cannot have only anchor attractions. So while Alien Swirling Saucers would have to be our sacrifice, the truth is that Hollywood Studios needs more “B-Ticket” and “C-Ticket” rides to balance crowds, provide experiences for families, and relieve pressure, not fewer. As much as fans deride Toy Story Land for being “cheap and cheerful,”  it could probably actually use more lightly-themed carnival rides to bump the park’s capacity higher.

So we'll put this one to you... What would your candidate for removal from Hollywood Studios be? If removing Alien Swirling Saucers would be a hit to the park's family-friendly capacity, then which of its 9 anchor attractions would you be willing to part with? Let us know in the comments below... but our journey isn't over yet.

Because speaking of “studio” parks...

Wierdly for a Brit I too like Jimmy Fallon even though I have zero cultural connection. Don’t kill off Jimmy!!

However over at DHS please please shutter the Muppets thing!!! Even though Muppets did cross the pond and I remember it fondly from my childhood, IMO not aged well at all. Sorry Kermit. I have dozed off in Muppets which when you consider the sky high cost of flights and park tix, was a mighty pricey 40 winks!

I agree with Jacob, Jimmy Fallon is a lot of fun; between the entryway with the exhibits of hosts-past, the pre-show videos showing skits, sketches and interviews and the intervals of live entertainment/Hashtag the Panda, it’s more than just the ride (which really is a lot of fun!). Now, the F&F ride, THAT one can go! I’m amazed, and a little dumbfounded, that ANYONE associated with the films signed off on that. Ugh, it needs to be replaced.

No! Jimmy Fallon is my favorite ride on the studio side! Leave it and get rid of either F&F or Shrek 4d. They are both massive stains on this otherwise great park.

If there’s one candidate that could possibly replace Fast & Furious: Supercharged, it’s a Florida version of The Secret Life of Pets: Off the Leash. This ride is coming to Hollywood, so having a Florida version would be a good fit.