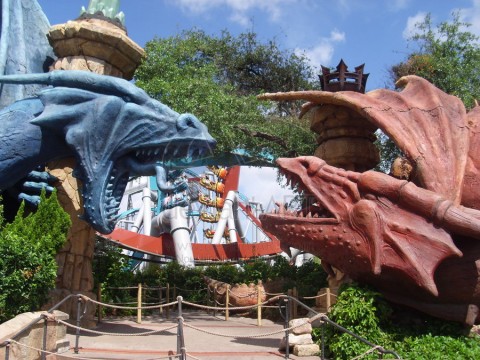 Year after year, it seems that more and more classic attractions and beloved fan-favorite rides enter our Lost Legends collection, replaced by hotter, fresher, and newer stories. In fact, fans have gotten used to saying goodbye to rides.

But throughout the history of Disney and Universal's theme parks, there have also been rare times when entire themed lands disappear off the map – literally. Today, we're collecting a list of twelve lost lands you may remember. In fact, you may have even stepped foot in these axed areas! Some of these replacements may be obvious improvements... Others may make you wish for a time machine to experience the classics of yesteryear one more time.

How many of these twelve ultra-classic lost lands do you remember? How many did you actually manage to step foot in? And for that matter, which of these do you wish would return, even at the cost of their own replacement? Let us know when you share this feature!

Originally opening in 1988, “Mickey’s Birthdayland” was a temporary expansion meant to celebrate the 60th anniversary of the Big Cheese himself! In typical Disney fashion, his birthday lasted two years. Even then, the “temporary” street of meet-and-greet circus tents didn’t disappear. Instead, it was renamed Mickey’s Starland in 1990. Then, in 1996, the land was officially made permanent as Mickey’s Toontown Fair.

What happened: When official artwork was released to announce Magic Kingdom’s New Fantasyland in 2009, Mickey’s Toontown Fair was gone, replaced with a glittering Pixie Hollow meet-and-greet. But when fans revolted against the Princess-heavy plans, Disney went back to the drawing board. Toontown Fair was annexed into Fantasyland and became Storybook Circus. Though the tents and Barnstormer were retained, extensive reimagining transformed the area from a two-decade-old temporary county fair to a vintage traveling circus with nods to Dumbo, The Little Engine That Could, and other classic Disney characters.

When the Declassified Disaster: Disney’s California Adventure opened in 2001, reception to the park was pretty dismal. One of the biggest complaints leveled against the second gate was its lack of Disney characters and having practically nothing for families with small kids. Both were solved with a Band-aid solution: “a bug’s land.”

Constructed in a small lot adjacent to the existing “It’s Tough to be a Bug” 3D show, Flik’s Fun Fair was a collection of fairly simple, off-the-shelf family flat rides (bumper cars, two spinners, a splash park, and the iconic Heimlich’s Chew Chew Train) overlaid with bug-sized details. Though the mini-land wasn’t phenomenal, it was a sorely needed family-friendly outlet in the park… and one of the earliest additions in the Pixarification of Disney Parks and one of the coolest ways Disney has shrunk its guests. Arguably, it was also more fun and effective than the Toy Story Lands that have become the norm today!

What happened: In 2016, Disney Imagineers toppled the Lost Legend: The Twilight Zone Tower of Terror in Disney California Adventure to create a Guardians of the Galaxy themed ride – the first in a vaguely-alluded to Marvel-themed land en route to the park. Initially meant to overtake the park’s Hollywood Land altogether, some political hurdles in resort expansion caused the Avengers Campus to shift, squashing “a bug’s land” entirely. In fact, the new Web Slingers: A Spider-Man Adventure attraction will be retrofitted into the old “It’s Tough to be a Bug” theater!

3. The Streets of America at Disney’s Hollywood Studios

Picture it: 1989. The new Disney-MGM Studios is the talk of the town. A real! Working! Movie studio! You may see actors! Stunts! Real celebrities! Of course, the park’s back half – its production facility – was accessible only via the spectacularly epic, multi-hour Declassified Disaster: The Backstage Studio Tour. Meant to whisk guests into the magic of the movies, this multi-stage attraction included a tram tour, which contained a visit to the New York Streets – a camera-ready recreation of the Big Apple. But almost immediately, the Studios proved so popular, New York Street needed to be opened to pedestrians instead of trams, allowing guests to explore the sidewalks, stoops, and streets up close…

Of course, like a real studio, the exteriors quickly revealed themselves as simple plywood facades with no actual businesses inside. Believe it or not, it wasn’t until 2003 that Disney announced their intentions to add streets themed to San Francisco and Chicago. Aside from a “forced perspective” San Francisco street mural, it never happened, but the area was still dubbed the Streets of America, with photo opportunities galore including a fabulous “Singing in the Rain” lamppost with a built-in umbrella!

What happened: The Streets of America officially bit the dust in 2016. In fact, most of the remaining “studio” facilities (and the Lights, Motors, Action Stunt Show Spectacular) would be leveled. They represented the old Hollywood Studios. It was time to bring in the new – Star Wars: Galaxy’s Edge. The Streets of America became the streets of Black Spire Outpost, an alien marketplace on the edge of the known universe. The closure of the Streets of America orphaned the holiday season Osborne Family Spectacle of Dancing Lights, but it also left one attraction without a land to call its own…

When the massively memorable and spectacular quotable Muppet*Vision 3D opened in the Streets of America at the Disney-MGM Studios in 1991, it represented the very last work that creator Jim Henson had been involved in before his unexpected death. Unfortunately, the beloved puppeteer’s passing also spelled the end for a much larger relationship with Disney that would’ve provided the Studios park with the Possibilityland: Muppet Studios – a “Muppetational” land anchored by The Great Muppet Movie Ride.

Muppet*Vision was ultimately the only permanent Jim Henson project to be produced for the parks. However, in 2016, as the massive reimagining of Hollywood Studios began, dead ends and construction walls isolated the 3D show to such an extent that it was officially annexed into its own, standalone land – Muppets Courtyard – with the Pizza Planet restaurant reimagined as Pizzerizzo.

What happened: Would Disney finally leverage their ownership of the Muppets? Of course not! “Muppets Courtyard” was a short-lived stop-gap. As quickly as it arrived, the land was disbanded. It was absorbed into the rather flavorless “Grand Ave.,” ostensibly themed to a modern day Los Angeles if only by its “anchor” attraction: the BaseLine Tap House pub. Nevermind that the bulk of the land – still dedicated to Muppets – is stylized as New York. In any case, Grand Avenue largely exists for one purpose: to lead guests into Star Wars: Galaxy’s Edge through the Figueroa Street Tunnel.

What's with this article? It clearly says lands axed from DISNEY parks but then item number one is Amity from Universal Studios. You guys know they are competitors right?I feel like this article needs to be edited for clarity either the title needs changed or Amity needs removed from this list. Universal Studios is in no way a Disney park

Thanks Heather, I have added Universal into the title. Sorry for that omission. Kind regards.

Only ones I haven't been to are the ones at Disneyland. And it's been so long since I've been to Universal that I didn't even know Jaws and that area were even gone.