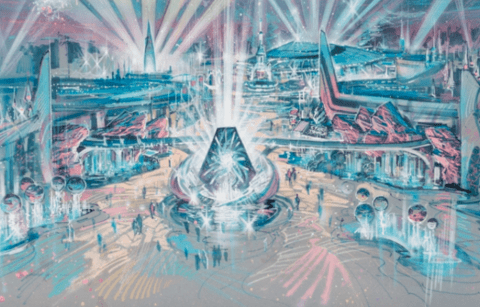 What will tomorrow bring? Since Disneyland’s opening day, Imagineers have been tasked with the impossible feat of creating the future. And more often than not, they’ve gotten it surprisingly right. The trouble is that “tomorrow” never stays that way for long. Throughout American history, our collective ideals of the future have shifted from bright, white, geometric landscapes of the Space Age to gritty, industrial, polluted wastelands and everything in between.

All the while, technologies and culture and imagination were changing, and Disney Imagineers spent most of their time playing catch-up. By the 1990s, designers were tired of the constant chase for tomorrow, and of the perpetual and never-ending updates needed to keep Disney Parks’ Tomorrowlands current. They had an idea: that each and every Disney Parks resort would get a New Tomorrowland. These New Tomorrowlands would be romanticized and built-out and – most importantly – timeless. They'd never need updated again.

How? Well, that’s our story. Read on as we explore one of the most enigmatic and unusual lands that Disney designed and announced, but never built. We’ll explore the boundless possibilities behind the forgotten Tomorrowland 2055 meant to change Disneyland’s Tomorrowland for good, and the abysmal reimagining it got instead… The best way to examine the future is to begin in the past, so let’s take a look at the history of Tomorrowland.

"A vista into a world of wondrous ideas, signifying Man's achievements... A step into the future, with predictions of constructed things to come. Tomorrow offers new frontiers in science, adventure and ideals. The Atomic Age, the challenge of Outer Space and the hope for a peaceful, unified world." That's what Walt called for in the dedication of Tomorrowland when it first opened with Disneyland in 1955.

If you can imagine, Disneyland’s construction timeline from moving the first shovel of dirt to opening the park was one year and one day. Early on in that short construction window, Walt lost a bit of his faith in Tomorrowland, and ordered that construction halt on the eastern side of the park.

His intention was that the shallow financing he had should focus on the rest of the park, and that Tomorrowland would open later, in a second phase of construction.

As the story goes, in January – just six months before the park opened – he allegedly changed his mind and instructed that development of Tomorrowland resume. And Tomorrowland was open for Disneyland’s grand opening. However, it wasn’t the Tomorrowland Walt wanted.

Under financial pressure and on a short timeframe, the Tomorrowland guests stepped into in the park’s first years was essentially a product showcase by corporations willing to rent space in the land – a Kaiser Hall of Aluminum, a Dutch Boy Color Gallery, and the Monsanto House of the Future displaying the unthinkable technology behind a domestic-sized microwave (legitimately the stuff of the future... the household, countertop microwave oven wouldn't be available for a decade).

Just a few Disney-produced installations were present, including a stunning walk-through of the actual film props and sets of 20,000 Leagues Under the Sea. One unique attraction was Rocket to the Moon, a theatre-in-the-round style presentation simulating a visual trip from Earth to the moon. 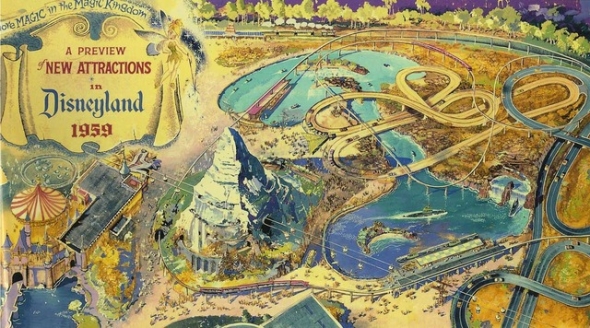 Tomorrowland’s largest expansion came in 1959 – four years after the park’s opening – when Walt got his chance to bring the land in step with what he’d always pictured. A stunning, massive growth-spurt added Matterhorn Bobsleds (the world’s first tubular steel-tracked roller coaster), the Monorail, and the Submarine Voyage – all billed with the brand new E-Ticket designation.

While the three new additions helped add some heft to Tomorrowland, they still weren't able to create the land Walt had always dreamed of. For that, he would need a clean slate.

A decade after Disneyland opened (and inspired by the work they'd been commissioned for for the 1964-65 New York World's Fair), Walt and his designers were already dreaming of "a great, big, beautiful tomorrow." Their ideas coalesced into what was triumphantly called New Tomorrowland, a complete from-scratch re-build of the land, firmly rooted in the iconic architecture and attitude of the Space Age.

Even guests who never saw this New Tomorrowland with their own eyes often cite it as the definitive version of the land. Sleek, white, and filled with geometric shapes and bright splashes of color, this Tomorrowland felt like an optimistic, vibrant vision of what the future could bring. Flanked by mirrored showbuildings, the new entry to the land was grand – a Space Race avenue flanked by soaring, geometric pointed spires, with the revolving Rocket Jets vaulted high above the land on a towering pedestal three stories up. 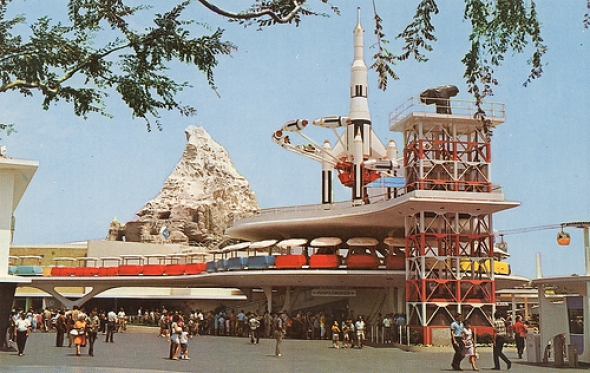 Perhaps the most recognizable and beloved element of this Tomorrowland was the sleek white highways of the Lost Legend: The Peoplemover, which would glide along the land's second story, zipping in and out of geometric showbuildings. Those showbuildings had magnificent and memorable attractions of their own. In the concept painting up above, the south showbuilding (on the right) housed the Lost Legend: Adventures Thru Inner Space, an abstract, Omnimover-led dark ride that reduced guests down to the size of an atom. The north showbuilding contained an updated Circle-Vision 360 theater, marveling audiences of the '60s. 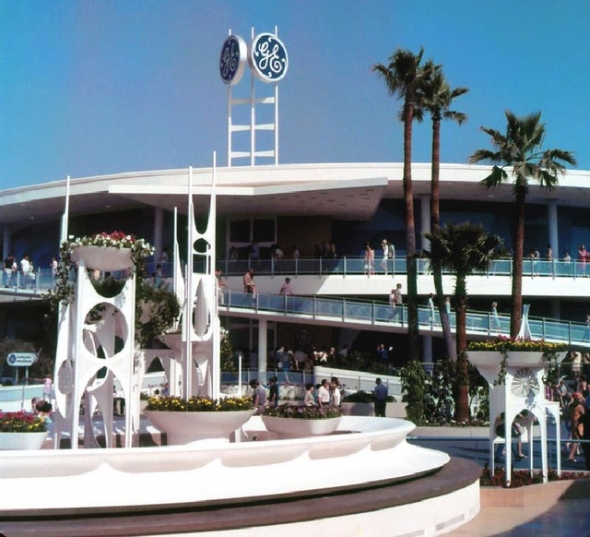 This new Tomorrowland had also benefitted from the close of the 1964 – 65 World’s Fair, when the Fair’s hit Modern Marvel: Carousel of Progress was relocated to the park in a new revolving theater at the land’s far end. The innovative attraction contained six stages built on a stationary central "core" of the building. The outer "ring" of the building was thusly divided into six theaters and would rotate, so that guests would enter a theater, and then rotate to the next stage, allowing six simultaneous shows to be occuring at once, each in a different scene. Carousel of Progress, sponsored by General Electric, chronicled the changes of one American family through the years as electricity and innovation shifted society.

Walt's New Tomorrowland was often called “The World on the Move,” filled with kinetic energy: The Rocket Jets spiraling through the air three stories up; The Peoplemover and Monorail zooming overhead; the rotating Carousel Theater drawing the eyes; the Submarine Voyage chugging away beneath the waves and waterfalls of the land’s central lagoon; the Autopia cars darting along elevated highways beyond; the Matterhorn Bobsleds whizzing by on the mountainside above…

While Frontierland was our nation's idling, ambling past, Tomorrowland was our vibrant, energized, bright, and kinetic future. And naturally, this now-iconic Space Age vision would influence a second Tomorrowland taking shape across the country...

When Magic Kingdom opened in the new Walt Disney World, it had its own Tomorrowland. Built from a similar time period and perspective as Disneyland’s New Tomorrowland, the land was similarly styled around clean, geometric shapes, gleaming white showbuildings, and concrete pylons. Still, the land had its own style. Rather than cloning the curved, elegant showbuildings of Disneyland, Magic Kingdom designed a new entry to Tomorrowland, flanked by massive pointed pylons with cascading waterfalls pouring into the park’s central moat below.

The land’s inhabitants by the mid-1970s included the park’s own Circle-Vision theater, the EPCOT-Center-influencing Lost Legend: If You Had Wings, and the relocated Carousel of Progress (relocated to Florida at GE's request, to benefit from international audiences).

And then came the iconic centerpiece that would define Tomorrowland from that point on... The Modern Marvel: Space Mountain opened in 1975. The mountain's sleek, white, Googie-influenced exterior would become the land's defining feature, establishing the look and feel of "tomorrow" for generations. Naturally, the ride was a massive hit, inspiring a long-gestating, improved version to finally open in Disneyland in 1977.

So far, so good. By the close of the 1970s, both Disneyland and Magic Kingdom offered Tomorrowlands that felt fittingly futuristic, born of the optimism and wonder of the Space Age. Both were packed with the elegant, whimsical, white architecture of an imagined future where plastic space suits, assembly-line houses, and the promise of outer space defined American culture. But tastes change and time passes… And next, we encounter the most dreaded and frightening thing Imagineers encounter: the Tomorrowland Problem. Read on....

It is sad to think of what might have been if Eisner and Disney had simply devoted all of their resources to Disneyland and Walt Disney World. It doesn't like any of the over seas parks are doing gangbusters, and it would be amazing to see all of the new rides and concepts spread out between the two original parks.

This was an amazing article! Well written with lots of really interesting factoids! Although having read this, one random/tangential thing keeps bugging me. With the failure of Disneyland Paris causing Eisner to stop "bet[ting] big on large-scale projects", how did Disney's Animal Kingdom get built? Was it just one of the projects that got dramatically scaled back from it's original vision (like the cancellation of Beastly Kingdom) rather than getting outright cancelled?

Awesome write-up! I really enjoy your in-depth articles, especially when some of the daily articles on this site can be a bit short on substance. Thanks again for a fun read!

This may be Blasphemous, but why not do away with Tomorrowland altogether. (What??!!) Yes, at least at Disneyland ( though Magic Kingdom needs some new inspiration too. ) now hear me out, Both areas are struggling to "maintain" the concept of Tomorrow and with the growing popularity of Pixar, Why not turn Disneyland Tomorrowland into ToyStoryland? They are building it from scratch in Hollywood Studios, Fl but Could very easily turn Tomorrowland into it for California. I know, But Walt built Tomorrowland!! but did he? He himself had stopped the building of it only to have finished it because of the corporate sponsorship he received and they, the corporations, were the ones who spurred the concept of the land. Now that Pixar inspired rides have crept into the land I say bring it on! I think with a totally different younger generation growing up with Pixar and Disney Junior, it would be a much more attractive concept for them. Tomorrow is not what they are interested in, it is Now. Now can always be, Updated.

The TPT retrospectives continue to be the most interesting articles on the site. Thank you for the history lesson; the stories of yesterday's rides, lands, and parks give the present status much more depth.