How could a grand and thoughtful plan like Tomorrowland 2055 fall apart? The same way so many Walt Disney Company projects in the 1990s did: Disneyland Paris.

Meant to be Michael Eisner's magnum opus and legacy-defining expansion, immense funding was flooded into the Parisian park. That's precisely why ambitious, ultra-detailed reimaginings like Discoveryland could exist. In fact, Disneyland Paris is still often recognized today as the most beautiful Disneyland-style park on Earth, somehow managing to retain the charm and storybook coziness of Disneyland with the scale and grandeur of Magic Kingdom.

But from the start, cultural conflicts made Disneyland Paris a monumental stumble. The resort opened to resounding financial losses so vast, Michael Eisner famously swore off any more large scale projects. That's why the decades after Disneyland Paris are marked by cancellations, cop-outs, and closures across the company, producing low-budget projects and pulsing cartoon characters into the parks wherever possible.

On the chopping block were the two new Tomorrowlands designated for Orlando and California.

But because capital expenditures for Orlando's land had already been approved and allotted, Imagineers got word that the attractions they were developing for Disneyland would instead be installed in Florida. Construction pressed forward in Orlando, yielding at least one ambitious land to arise as the finale of Eisner's big budget "Ride the Movies" era.

Magic Kingdom’s New Tomorrowland opened more or less on schedule, in 1994. The radical design was indeed a smart and timeless one. The sleek, simple, geometric 1970s look had been entirely replaced by a bustling and detailed metropolis of the future. However, rather than being a glimpse into the potential scientific wonders of tomorrow, this Tomorrowland is all science-fiction: a world of landed spacecrafts, pink and blue neon signs written in extraterrestrial languages, metallic fins, and intermingling alien cultures.

Most brilliantly, Orlando’s Tomorrowland (originally) operated in one seamless continuity. New attractions (and repurposed old ones) were all written as interconnected elements of a functioning galactic spaceport, with each attraction taking place logically within the city.

For example, the Tomorrowland Transit Authority "acted" as the city’s public mass transit (with riders on the “Blue Line,” but overhead announcements and false track extensions building out the universe by referred to a “Red Line” and “Green Line” that didn't actually exist.) 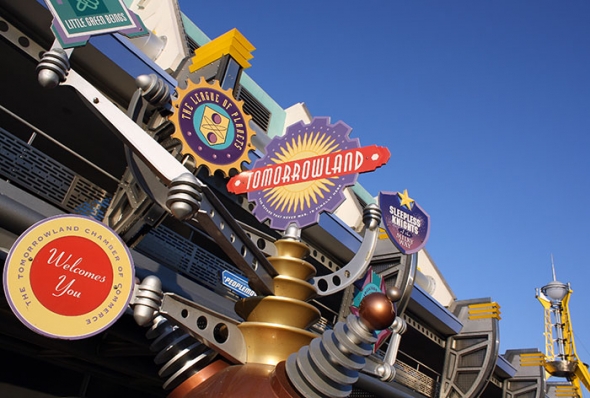 There's even a quick service restaurant cast as an intergalactic nightclub with an otherworldly alien playing at the piano for diners to enjoy. All of these pieces and parts united Tomorrowland's attractions, restaurants, and even shops into one single, overarching story and style... Just like Frontierland or Adventureland or Fantasyland, Tomorrowland was not just a conceptual place, but a habitable one... a very smart idea indeed.

Florida's New Tomorrowland had narrowly avoided getting the budgetary axe since it was already well into construction when Eisner put the stop-order on new projects. That meant that Magic Kingdom still got a New Tomorrowland, and it wasn't half bad, either.

As for what happened to Disneyland’s Tomorrowland? Well, post-Disneyland Paris, Eisner's orders that large scale projects disappear stayed true. Disneyland still needed a new Tomorrowland, but now designers were tasked with spending as little money as possible to reinvigorate the land and give it a timeless makeover. Tony Baxter was again put in charge, but this time with none of the Blue Sky benefits. With practically no money, Disneyland got exactly what executives asked for: a disaster. See what they created on the next page...

One page two you said

"Think about it: The Space Race had seen countries sprint to the moon throughout the ‘60s and ‘70s, but by the ‘80s, the moon had lost its luster in the eyes of the public.

Which countries (plural) went to the moon?

They might be referencing the fact that Soviet Union and the U.S. had a bit of a race to the moon, with America finally landing it first despite Russia's initial lead at getting the first man to orbit the earth, and landing the first object on the moon? And maybe China, since they also had manned space travel, though I don't know much about it so I won't pretend I do, but maybe they're including them as well? I don't know if that's what they're referencing but perhaps?

The U.S. is the only country that's made it to the moon so far, which I expect you know based on your question. The Space Race refers to the race to get there by the Soviet Union and the U.S. After the Space Race ended, the moon was no longer a pop culture icon for people.

Im pretty sure, but no completely, Russia, China, US

Great info; well-written! My biggest peeve, perhaps, is the relocation of the jets from atop the Peoplemover tower to the entry at Disneyland. 3/4 of the thrill and pleasure of that attraction was the height and the views. Now it is basically Dumbo-on-the-hub. Hope they will fix this land one day. And thank you for the Pixar comment at the end. I completely agree. I wish they wouldn't worry so much about storytelling sometimes (and/or a retelling of film franchises) and just give us an awesome, orginal, sensory experience.