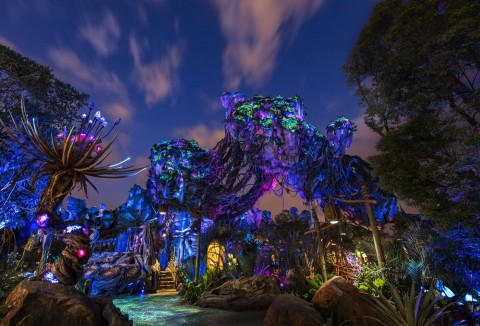 Chances are, you've been spending a lot of time around your home and neighborhood recently. Working from your living room; working out in your bedroom; walking around the neighborhood for relaxation; ordering carry-out from local restaurants nearby... For most of us, this spring has been an exercise in figuring out how to confine our lives to a much smaller geographic area than ever before.

At the same time, most of us are longing for "the old days" of exploring our beloved Disney Parks and the original places, stories, characters, snacks, and souvenirs that bring them to life. And that got us to thinking... If you were given free reign of Disney Parks and offered one land to fully, immersively inhabit to ride out the remainder of any "quarantine" or self-isolation Castaway style, which would you choose to make your home? We're talking, total reliance on its in-universe availability and story – where would you live? What would you eat? Where would you get your exercise?

Here are our top picks, but be sure to share your ideas in the comments below!

1. Adventureland at the Magic Kingdom

Adventureland might just be the perfect place to self-isolate. After all, the Robinson family already did it! In what other Disney Parks land will you find a fully-functional, plumbing-equipped, bed-ready Swiss Family Robinson Treehouse? With running water, records, books, and games, this Magic Kingdom retreat could literally be a home away from home if you were looking for a long-term place to isolate.

Wouldn't it be nice to do your daily walk "around the neighborhood" along the banks of the Jungle Cruise, replacing squirrel sightings and tweeting birds with apes and anacondas?

And in terms of those "neighborhood restaurants," just think about it – not only would Adventureland give you access to Citrus Swirls and Dole Whips, but also the magnificently unique cuisine of the Jungle River Navigation Co. Skipper Canteen!

If we imagine that this quarantine would also magically give you access to the rides and attractions in the land (which is a much more fun idea), you'd also get unlimited solo boat rides on Pirates of the Caribbean, the chance to perfect your family's own skipper spiels on the Jungle Cruise, and of course, plentiful hours "singing like the birdies sing" in the Modern Marvel: The Enchanted Tiki Room. What more could you ask for?

2. The Land at Epcot

For foodies and gardeners alike, there can be no better place to self-isolate than The Land pavilion at Epcot. I mean, you could truly and literally play out your dreams of "living off The Land!" First of all, imagine waking up each morning to unmoor a boat from its dock at Living with the Land and riding it off to the greenhouses to do your daily cultivating and farming, and using the gourmet kitchens of the Garden Grill Restaurant to whip up something fresh.

Plus, if you snoop around enough (which we think you'd be justified in doing in this rare circumstance), the hidden Kraft lounge not only provides sensational views of the dessert and farmhouse scenes of Living With the Land, but its most recent use – an AP lounge in 2000 – makes us think it's the perfect outfit for sneaking away for some quiet time away from the family.

Also consider that being "stuck" in the land would offer you unfettered access to one of the hottest Walt Disney World E-Tickets there is – the Modern Marvel: Soarin' – not to mention the theater currently showing "Awesome Planet" which, at least in this daydream, could be reconfigured into your private home theater to show Disney+ all day, every day.

3. Pandora: The World of AVATAR at Disney's Animal Kingdom

Right now, plenty of folks staying home are secretly (or not-so-secretly) wishing that they'd been stuck in a tropical paradise just before this hit, forcing them to "lock down" at an island resort. At Disney World, Pandora is about as close to that as you can get! It wouldn't be so bad to be "stranded" on the distant moon of Pandora lightyears from Earth right now, living amongst the incredible flora and fauna of the Valley of Mo'ara – a place invented entirely by Disney Imagineers.

Not only could you enjoy the spectacular foods and curious drinks of the Satuli Canteen and Pongu Pongu – celebrating the indigenous flavors and ingredients of the native Na'vi people – but you could also hike through miles of trails cutting through the bioluminscent jungles and the abandoned remains of human encampments from a long-passed era. Plus, if you get lonely, you can adopt a Banshee who'll stick by your side (literally) as you tackle one of the best Disney "mountain" rides ever and get unlimited tours of the jungle aboard Na'vi River Journey. (You could ride so many times, you'd be singing along in Na'vi!)

Where would you sleep? Well, while we might never get a glimpse of any actual resort-style facilities set up on Pandora (apparently it's more of a day-visit than a multi-day resort), no doubt thousands and thousands of guests submitted their names to a "glamp" (that's glamour-camp) on the moon overnight to enjoy its bioluminescent nightlight. Chances are that you could set up a rudimentary tent of your own, sleeping amid the babbling brooks and roaring waterfalls of this supernatural spectacle.

If you ask many Disney Imagineering afficianados, New Orleans Square might just be the peak of classic Disney; one of the most cherished and beloved lands of Walt's era. That's why it made our list of 16 Disneyland Exclusives That Should Make Disney World Fans Jealous. (Don't worry – we offer the opposite list, too.) Its magnificently-detailed streets of the Jazz Age are beautiful and enchanting, inviting exploration.

Food wise, New Orleans Square has a few of our favorites. If you don't mind putting on "the quarantine fifteen" (and let's face it - at this point, who cares?), imagine hot and fresh Mickey-shaped beignets every day, in shakable bags filled with powdered-sugar. You've also got the sensational French Market with its corn chowder, jambalya, and roasted chicken ready for patio dining (though we suspect the in-house jazz band would be absent in this situation).

From ground level, guests can glimpse apartments and rooms overhead in the second story with balconies overlooking acres of Spanish moss, magnolia beds, fountains, and of course, the Rivers of America beyond. Running around or yoga by the waterfront? Count us in.

Adventure-wise, self-isolating in New Orleans Square would give you access to two of the greatest Disney attractions ever designed: Pirates of the Caribbean and the Haunted Mansion. Just think, you could ride these two starring E-Tickets so many times, you'd be an expert on both... if you're not already! You could also imagine the pièce de résistance: dinner nightly in the Blue Bayou – the restaurant located inside Pirates of the Caribbean, beneath eternal night skies.

Or would you use your lockdown in New Orleans Square to at last open those stained-class doors to the Court of Angels and ascend those curving stairs to Club 33?

Still, we've got four of the BEST choices for self-isolating in Disney Parks' lands on the last page... From plush beds to desert diners; firefighter workouts to alien snacks... Read on...