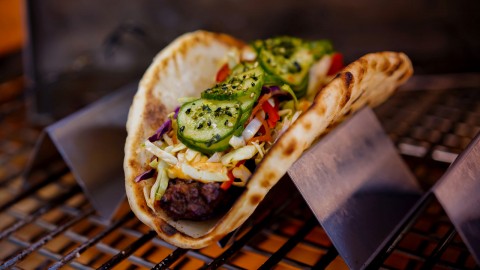 "You don't know what you've got till it's gone." Maybe that's why, in the first week of COVID-19 related closures for the world's major theme parks, we're suddenly longing to not just step into our favorite stories and worlds, but to dine in those decadent, immersive, delicious, world-building restaurants they contain...

Yes, the last decade has seen an almost unimaginable shift in the scale and scope of theme park additions, prioritizing built-out, in-universe lands over mere E-Ticket rides. But along the way, the most unexpected, exciting (and for Disney and Universal, lucrative) development has been each of those land's ways of fully placing guests into their stories and worlds through foods, drinks, and snacks – how to eat like an alien, dine like an adventurer, drink like a cartoon character, and more...

As Imagineering fans daydream of new lands themed to their favorite intellectual properties, the question always turns to food. And now, with those restaurants closed for deep-cleaning and far-reaching proclamations shutting many restaurants across the country altogether, we can't help but dream of some of these must-try menus from the world's most incredible themed lands...

Location: The Wizarding World of Harry Potter (at Universal's Islands of Adventure and Universal Studios Hollywood)

We can pretty much unanimously agree that the Wizarding World of Harry Potter was the first of today’s newest generation of theme park “lands” – wholly immersive, dedicated to a single intellectual property, and committed to bringing to life a single, physical, to-scale place copied right from the screen. To that end, the Three Broomsticks in Hogsmeade was a must-see (er, must-eat?) for Potter fans and themed entertainment design fans; the place that changed it all!

Perfectly capturing the frosted-window, dark wood, snow-capped essence of the Scottish pub Harry and friends retire to on their trips to Hogsmeade village, the restaurant was groundbreaking for adhering to series creator J.K. Rowling’s exhaustive commitment to world building, meaning you won’t find hot dogs or Coca-Cola here. Instead, the restaurant exclusively offers real pub fare and in-universe drinks like pumpkin juice, Fizzy Otters, and Butterbeer. Given guests’ excitement about being part of the culinary narrative, it’s no surprise that the formula was repeated in the attached Hog’s Head Pub and in the Diagon Alley expansion’s counterpart, the Leaky Cauldron.

Menu Must-try: From Shepherd’s Pie to Bangers and Mash, the Scottish pub classics are simply unmissable. There’s also Fish and Chips, Lemon and Herb Roasted Chicken, and Beef, Lamb, and Guinness Stew. You almost can’t go wrong. All that said, the one many guests can’t stop talking about is the tangy, rich Spare Ribs Platter, served with corn on the cob and roasted potatoes. Or, try the Great Feast (above) to sample them all! Wash it down with a Pumpkin Fizz and you’ll truly be living the hungry Hogwarts student life.

Disney’s first large-scale response to the Wizarding World popped up a thousand miles away when the Route 66 desert town of Radiator Springs popped up inside the reborn Disney California Adventure. Like Hogsmeade, the immensely detailed recreation of town included the real shops and restaurants owned by the automotive cast. The only problem is that humans don’t buy hubcaps or drink motor oil, meaning the mythology needed expanded a bit.

Still, there’s no place in Cars Land like Flo’s V-8 Cafe, the neon glowing drive in at the corner of Route 66 and Cross Street. The teal, chrome, and glass-clad mid-century diner is filled with the doo-wop tunes of Flo’s Motorama Girls records with spectacular views of the Cadillac Range, Ornament Valley, and the Modern Marvel: Radiator Springs Racers bursting through the desert landscape.

Menu Must-try: The menu at Flo’s has gone through a number of revisions, axing some fan favorites like radiator-shaped pasta salad and other delectable deli salads in favor of a simpler All-American diner menu of pulled pork in a chipotle barbecue sauce, fried chicken, and a tuna sandwich. That said, we’ve got to praise the vegetarian choice here - Fillmore’s Pot Pie (get it?) filled with creamy sweet corn and potato, chiles, and cheddar cheese in a flaky pie crust... or the classic V-8 Milkshakes you can't beat...

A reimagining of the long-shuttered Adventureland Veranda, the December 2015 opening of the Skipper Canteen totally refreshed Magic Kingdom’s dining options. Brilliantly, the restaurant was redesigned to connect to some of the cinematic mythologies that permeate Disney Parks. For example, the restaurant is supposedly run by the Jungle Navigation Co. Ltd., the exotic pre-war company (founded by Dr. Albert Falls) who runs the “World Famous” Jungle Cruise. And fittingly, the restaurant is positioned as the off-duty hangout of the ride’s infamous Skippers.

Inside, the restaurant is divided into three unique dining rooms: the Skippers’ mess hall (its sunlit, towering central room), a jungle room (filled with ornate dark wood display cases and masks) and a secret room hidden behind a bookcase (secret meeting space for S.E.A. - The Society of Explorers and Adventurers).

Menu Must-try: The coolest thing about the Skipper Canteen, though, might be its menu. Unabashedly uprooting the park’s culinary features, the Skipper Canteen’s menu is downright adventurous. It’s meant to represent the exotic dishes encountered by adventurers on their global trips, and by nature of offering a $33 whole fried fish (head and all!) it succeeds wildly. For slightly less adventurous palates, we'd recommend the tofu and thai noodles tossed in a Spicy Soy-Chili-Garlic Sauce – said to be a favorite of Pamela Perkins, president of the Lost Legend: The Adventurers Club!

Incredibly fun article, thanks for taking me there and reminding me of so many amazing meals I've had over the years!