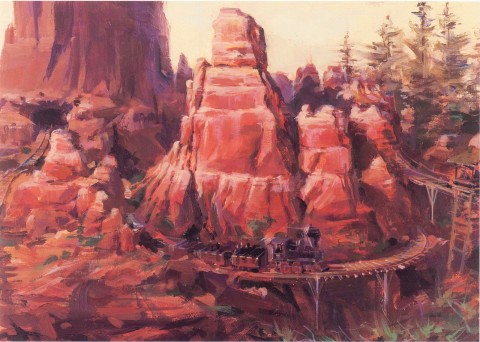 Since those words were placed above the entrance to Disneyland in 1955, Disney Parks have been about taking guests into incredible stories in unimaginable places. Born from the minds of Walt and his team of Imagineers, Disney's storytelling has continued to evolve and expand through new eras. Along the way, designers have crafted some spectacular tools for building those stories and places.

First, we took a look at beloved Original Characters created just for Disney Parks; figures known and beloved by all because of their starring roles in theme park attractions.

Then, we explored Original Worlds… lands where Imagineers haven’t just rebuilt places we’ve seen on screen, but expanded them into fresh, real, physical spaces for guests to explore (and eat and shop).

Today, we’ll look at something even bigger: Original Mythologies – the massive, overarching stories that connect attractions, lands, or even parks in larger-than-life continuities; the kind of enormous, carefully-curated narratives that change Disney Parks from “a collection of rides” and into a living place where stories intersect, grow, and follow guests.

It's a tale as old as time... literally. No matter what Disney's designers did to Tomorrowland, "tomorrow" always managed to become "today." Disneyland's original 1955 tomorrowland needed a shot in the arm by 1959, then a full facelift in 1967. Magic Kingdom's 1971 debut brought about a Space Age-influenced Tomorrowland of its own, setting the tone for the Modern Marvel: Space Mountain. And while those gleaming, geometric, white-and-red, NASA-stylized lands might've been en vouge in the '60s and '70s, they weren't exactly timeless...

By the '80s and '90s, a new generation of pop culture predictions (like Alien, Blade Runner, Terminator, and even Star Wars) had suggested a new kind of future awaits: a grimy, urban, industrial world driven by consumption, pollution, and overpopulation. The optimistic mid-century futures shown in Tomorrowland looked downright naive.

In 1994, Magic Kingdom debuted a New Tomorrowland, billed as "The Future That Never Was." Rather than actually trying to predict the look and feel of a distant year (proven time and time again as an impossibility), this Tomorrowland would be the future as imagined from the past: in this case, a pulp comic book-style meta-city of elaborate sci-fi fins, teleporters, robotic newsboys, and metallic trees. By ignoring science and instead focusing on science fiction, the land would be evergreen, and never need another facelift! ... Right?

But the most brilliant thing about this city of Tomorrow is that it was imaged as a "real" city, with all of the land's rides and attractions enveloped into one overarching frame story. The Tomorrowland Transit Authority became the "real city's" functioning mass transit system, with imaginary lines and stations invented throughout town; the Metropolis Science Center hosted a cutting edge time travel display, the Lost Legend: Timekeeper; and of course, the Interplanetary Convention Center was rented by X-S Tech, demonstrating the interstellar teleportation technology that became a Lost Legend: Alien Encounter.

Ultimately, even a timeless Tomorrowland didn't last. By time the reinvented land turned 10, its original attractions had all been replaced with Buzz Lightyear, Monsters Inc. and Lilo and Stitch. That made the land's unified "sci-fi city" style into nothing more than gilded shells. In 2019, Disney began removing the tacked-on ornaments of the pulp comic book style - the beginning of an ongoing process to return to the land to its '70s-inspired simplicity (which, ironically, came back into pop culture as a nostalgic evergreen view of tomorrow... who knew!). Still, the short-lived and creatively ambitious New Tomorrowland of '94 was one of Disney's first attempts at a land-wide continuity that continues to this day.

When Disney first announced plans to build a resort outside of Paris, reception was... decisive. Noted French figures launched an all-out media assault on the idea of Disneyland - an icon of American consumerism and commercialism - invading the pastoral Parisian countryside; akin to putting a McDonald's atop the Eiffel Tower. How could Disney remove the Americana inherent in the Disneyland formula, so rooted in American pop culture and heritage?

Designers behind the French park smartly rebuilt each of the park's themed lands from a new perspective. Instead of a "living history" celebration of America's Westward expansion and historic folk heroes like Davy Crockett, Paris' Frontierland was a world all its own. There, the land is incarnate as Thunder Mesa, an 1860s town infused with literary romance and drama; an idealized, fantasy-infused vision of the Old West more aligned to European sensibilities.

As in New Tomorrowland, the rides, shows, and attractions within Disneyland Paris' Frontierland are all connected in one overarching continuity that explains the founding of Big Thunder Mountain and its connection to an old haunted mansion on the banks of the river... One fractured from the town long ago by an earthquake. We explore that story in a standalone must-read, Modern Marvels: Phantom Manor.

When Disney acquired the worldwide, exclusive rights to build attractions based on Fox's AVATAR film, it seemed like a coup; just as Universal put the finishing touches on its industry-changing Wizarding World, Disney had captured something even bigger: the highest grossing film ever. Of course, fans will be quick to explain that AVATAR seemingly flashed out of the zeitgeist the minute it left theaters, leaving practically no memorable quotes, no nameable characters... no footprint in pop culture. That left Disney with the theme park rights to a global blockbuster that no one seemed excited about... Yikes.

Thankfully, when Pandora - The World of Avatar opened, it all made sense. We already celebrated the Original World Imagineers devised to bring the jungle moon of Pandora to life, "zooming in" on the moon's Valley of Mo'ara. And while the physical place they built is beautiful and gorgeous and spectacularly scaled, the most impressive thing Disney's designers did in Pandora might not be the place at all, but its mythology.

After all, during the long development process on the World of Avatar, Imagineers had to recognize that rides starring the film's main characters (what were their names again?) or battling the movie's villain (who was that?) wouldn't resonate. Even its "memorable" features (floating mountains, flying dragons, and a tree) are mere hazy memories than fully-formed pop culture staples in most memories. Besides, would tourists want to visit a beautiful moon in the midst of being torn apart by a human-led assault to strip it of its resources? So instead, they smartly severed the land entirely from the film, its characters, and even its plot.

Now, when we visit the Valley of Mo'ara on Pandora, it's decades – maybe centuries – after the events of the film. Our role is as eco-tourists, traveling to this verdant world lightyears from Earth via the high tech Brava Centauri Expeditions travel company. The seige humans led on this moon ended a very long time ago, and we – as friendly visitors – can look at the rusted out remains of long-abandoned military barracks and laugh at the audaciousness of some ancient ancestor of ours who foolishly tried to strip this moon of its minerals. But our main objective is to explore its flora and fauna; to commune with the culture of the Na'vi and to understand the inherent value they place on nature.

Maybe by seeing the beauty of Pandora, we can better appreciate the beauty of Earth! So although the Avatar film (and its many upcoming sequels) no doubt provide a visual basis for the bioluminscent jungles of Pandora, Disney Imagineers might've faced their toughest challenge yet in creating a mythology and purpose for the land that can resonate not only with audiences of 2020, but 2050... long after Avatar and even its sequels have exited pop culture.

New Tomorrowland, Thunder Mesa, and The Valley of Mo'ara tested Disney's storytellers, allowing them to craft overarching frame stories to connect rides and attractions. But Disney’s three biggest original mythologies are intertwined across the world. They await on the last page…