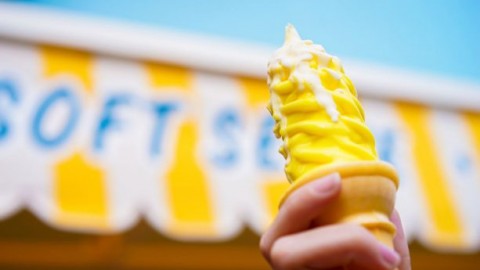 After a long day of rides, even the most conscientious eater would agree that nothing hits the spot quite like a one-of-a-kind theme park snack. And in fact, over the years, some parks have developed signature sweet treats and savory sides that have become legendary must-haves; essential elements of any visit!

Today we'll take a cross-country tour to sample the special snacks that transcend generations and become part of a park's personality. From accidental anomalies to treats designed through extensive testing to fit into ultra-immersive lands, these must-try extras are fan favorites for a reason. How many have you tried? Which of these 15 snacks are must-haves, or signature treats that complete your visit? Which other snacks belong on our list?

When Kings Island opened in 1972 – just a year after Walt Disney World – it was Taft Broadcasting’s take on the modern Magic Kingdom formula (including hub-and-spokes lands radiating out from a central icon). The park originally featured Hanna-Barbera’s cavalcade of cartoon characters (think The Flintstones, The Jetsons, Yogi Bear, and Scooby-Doo) and, in 1982, debuted the beloved “Smurf Cone” – a tantalizing swirl of blueberry-flavored ice cream. The sweet treat was removed from the menu in 1992 before fan backlash quickly restored the blue snack, and it's remained a family tradition ever since!

Dollywood is a park all about tradition. Its Craftsmen’s Valley area isn’t just an authentic recreation of a late 1800s Appalachian village – it’s a living showcase of real craftspeople demonstrating the daily life of the people of the Great Smoky Mountains at the turn of the last century. Candlemakers dip and carve the wax before your eyes; leatherworkers trim and sew wallets and belts to order; woodcarvers, potters, and blacksmiths show their skills… You may even catch the creation of real apple butter right out on the paths of the park.

There’s no better place to see the park’s authenticity and sincerity than in its signature cinnamon bread. The smell of sugar, butter, and cinnamon wafts from the Grist Mill where the pull-apart bread originates. Piping hot and served with apple butter or icing, it’s a world-class treat that makes any visit to Dollywood complete.

Located just a short drive from the hustle and bustle of Orlando is the Roadside Wonder: Gatorland; an astounding animal adventure park only Florida could produce. Evolved from its origins as a mid-century tourist trap, Gatorland today is a full-fledged theme park in its own right, fusing the natural wonders of a nature conservation park with the thrill of Florida’s oldest residents. No, not them... alligators!

The park’s most famous snack is probably also its strangest: “gator nuggets” served at Pearl’s Good Eats. Those brave enough to try the curious reptilian snack report that (you guessed it) they taste like chicken (also a reptile, technically), albeit with a salty or fishy twist. It’s certainly a snack you can be proud to have experienced. And no, the park does not use their own alligators.

Busch Gardens Williamsburg in Virginia brings to life “the old country” in themed lands representing England, Scotland, Ireland, France, Canada, Italy, and Germany. Naturally, entertainment and food are as much an attraction as any roller coaster, with authentic options in each of the park’s villages.

But one of the best must be in Germany where the warm, baked smell of “Beste Brezeln und Bier” (that’s “Best Pretzels and Beer”) wafts through Oktoberfest. There, hand-made pretzels are twisted into classic shapes, slices into nuggets, served with pizza toppings, or coated in brown sugar and cinnamon. Beer cheese, spicy mustard, nacho cheese, and sweet cream cheese icing are available as dipping sauces. It’s just one of the park’s many tasty European-inspired  treats.

When the Modern Marvel: The Enchanted Tiki Room opened at Disneyland in 1963, it was the first-ever application of Disney’s patented Audio-Animatronics, inviting guests into a South Seas singalong performed by birds, flowers, and tikis. After the Dole Food Company took over sponsorship of the attraction, the Dole Whip debuted. Sold from a thatch-roofed hut accessible from both Adventureland and the Tiki Room’s pre-show lanai patio, the vegan pineapple-flavored soft-serve frozen treat became a Disneyland cult classic.

In late 2018, a rare bit of underutilized property between the Tiki Room and the rivers of the Jungle Cruise was ingeniously adapted as the Tropical Hideaway, a Polynesian patio mixing the mythos of the two neighboring attractions with the story of S.E.A. and a rare animatronic outside of rides. The perfect place to relax with a Dole Whip, the eclectic patio also added some sought-after spin-offs of the snack, including a float (with pineapple juice, above), raspberry and orange swirl variations and “loaded” versions topped with spices and fruits.

Don't worry... Disney World isn't without its own tropical treat! Read on...