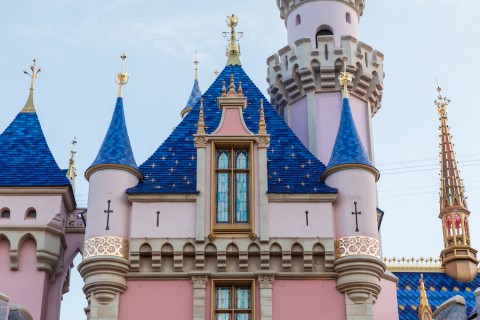 We've all heard it, been asked it, or seen it on Facebook. "Why would I want to go to Disneyland? Isn't it, like, a lot smaller than Disney World?"

And even if the question may make Disney history fans seethe, it's a fair one for casual theme park goers to ask. How can the 200-acre Disneyland Resort complex that could entirely fit inside Epcot compete with the "Vacation Kingdom of the World?" In some ways, it can't...! In real, quantifiable ways, Walt Disney World simply can't be beat.

Especially if you grew up east of the Mississippi (or outside of the United States altogether), it's likely that Walt Disney World is your home base for magic. And in that regard, it's exactly what it was designed to be: an international destination righting the wrongs of the narrow paths and 1950s infrastructure of the tiny, landlocked Disneyland with the power of hindsight and a successful blueprint to work off of.

Of course, real Imagineering fans know that the "Disneyland vs. Disney World" debate is absurd and unwinnable. So next time a friend questions why Disneyland is worth a visit, here are just a few things Disney World fans should be jealous of Disneyland for getting first (or at all). And don't worry – we won't fall into the rabbit hole of "it's the original," "Walt stepped here," "the weather is perfect," or "Park-Hopping is simple!" Instead, we'll stick to the rides and attractions that make Disney World fans jealous...

New Orleans Square is often regarded as the most beautiful classic Disney Parks land on Earth. It was also the last project Walt himself oversaw. With intricate streets of labyrinth-like alleys, plazas, and staircases, the land is alive with the musical, jazzy spirit of the French Quarter in the 20th century. It was also the first of Disneyland's areas to reflect a real, physical place you'd find on a map (though still passed through a lens of fantasy and romanticism).

Guests can spend a whole evening relaxing on the wrought-iron, vine-covered patios of the French Market or Cafe Orleans where real jazz bands play. Forget "Disneyland" t-shirts; the shops of New Orleans Square include authentic offerings, like a jewelry store and perfumerie.

What's more, New Orleans Square practically invented the idea of exclusive in-universe snacks (later taken to its extreme with Butterbeer and Blue Milk) with guests dining on non-alcoholic mint juleps and Mickey-shaped beignets as the park's two massive riverboats sail by on the Rivers of America. It's the kind of land you want to spend time in.

And to top it all off, there may be no Disney Parks land on Earth that can best its attraction lineup, either. New Orleans Square includes Haunted Mansion (in a spooky white plantation house on the edge of the elegant city) and Pirates of the Caribbean (with a ride time about twice that of Magic Kingdom's, and often regarded as the best classic dark ride on the planet). It's also where you'll find the park's most memorable restaurant, the Blue Bayou, located inside Pirates of the Caribbean with diners cast as guests at a plantation party from the point-of-view of riders. At the end of the day, New Orleans Square is one of a kind, and while Magic Kingdom's Liberty Square may be its counterpart, they're really apples and oranges by design.

Quite simply, there may be no E-Ticket on Earth quite like the Modern Marvel: Indiana Jones Adventure. The perfect fusion of Disney's technology and storytelling, the cinematic ride is perhaps the highlight of the cinematic, big-budget '90s attractions pioneered by Michael Eisner and his determination to make Disney Parks cool, hip, thrilling places with modern stories and heroes. The dark ride sends guests deep into the lost Temple of the Forbidden Eye where an encounter with the ancient god Mara promises either otherworldly gifts... or doom...

Indiana Jones Adventure's legend is one of the strongest and most powerful in the Disney Parks canon, and we even rank Mara among our list of the best characters created for the parks. Then layer on one of the most physical, visceral rides Disney's ever designed (thankfully, just before screens became commonplace) and a multi-million dollar technological ride system (the motion-simulating EMV) and you end up with a true blockbuster ride experience.

Not only is Indiana Jones Adventure one of Disneyland's headlining rides; it also acts as a centering force for the park's Adventureland, drawing the Jungle Cruise, the nearby Bazaar, and the Tropical Hideaway into its 1930s lost river delta story, wherein guests are cast as nouveau riche Europeans drawn to an exotic port by black-and-white news media surrounding the temple's discovery. In fact, once you've experienced Indiana Jones Adventure and the way it truly anchors Adventureland in a specific time and place, no other castle park's Adventureland feels quite right without it...

Indiana Jones Adventure alone should be enough of a draw for most Walt Disney World regulars to price out a trip to Anaheim, and is definitely a major reason to be jealous of Disneyland's stellar lineup.

On any given day, it's estimated that nearly a third of guests at Disneyland are Annual Passholders, while another substantial chunk is local to Southern California and the surrounding region – a huge difference from Orlando, where guests overwhelmingly come from outside the state and country. (We'll see that difference be the impetus for a number of Disneyland projects on this list.) Enter projects like this one – examples of the kind of "plussing" Disneyland often undergoes just to keep its heavily local guests coming back for more.

In 2014, Disneyland's version of the coaster was completely rebuilt from scratch in a massive 14-month refurbishment. The real talking point, though, was its finale. The third lift hill – which used to feature massive rocks rumbling as if being dislodged by an earthquake – got a texture mapped projection makeover, with fuses lit by a tipped lantern chasing the train up the lift and igniting boxes of TNT, blasting massive clouds of fog overlayed with projections of explosions. It's a thrilling, memorable, and iconic new scene. 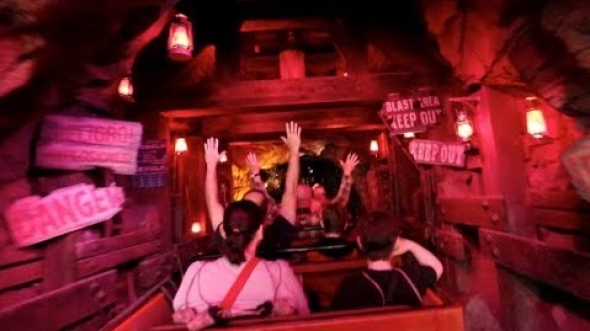 The makeover was exported to Disneyland Paris shortly thereafter. Meanwhile Disney World's version of the ride never got it. It still features the "earthquake" finale, which might be fine except that the moving rock props were turned off years ago. It makes this ride's finale into a silent climb up a cavern. Rumors suggest that the Big Thunder reimagining might be coming to Magic Kingdom (as one of 50 new things for the resort's 50th anniversary in 2021) but coming 7 years after Disneyland got it is... pretty frustrating.

The Haunted Mansion is a treasured favorite at both Disneyland and Disney World. That said, the ride's duplication is one of those rare instances where fans of both resorts tend to agree that Disney World's is better, if only for a handful of additional show scenes in the ride's first half, and better maintanence and upkeep. That said, there is one thing that makes the Disneyland version so incredibly sought after: the Hatbox Ghost.

One of our 10 great characters created just for the Parks, the Hatbox Ghost was famously installed in the Haunted Mansion during its construction, but removed before opening to the public. Imagineers just couldn't quite get the effect – wherein the ghost's head would disappear off his shoulders and re-appear in a hatbox he held – to work given the ambient lighting in the ride. Despite never being in the open attraction, the genuinely-frightening, grizzled spectre was prominent in the ride's marketing and merchandising for decades. And, in a bit of nostalgia, the character "materialized" in Disneyland's Mansion in 2015 – just in time for the resort's 60th anniversary celebration.

The new-age Hatbox Ghost effect is truly mesmerizing, and it's a highlight of the attraction to see the effect work. Naturally, you might assume Disney would have an identical figure produced to place in Magic Kingdom's version of the ride... but, nope! The spot where he should stand is instead empty. Could this be another treat coming for Disney World's 50th anniversary? Perhaps. Until then, it's yet another thing Disney World fans should be jealous that Disneyland got first... or, in this case, at all...