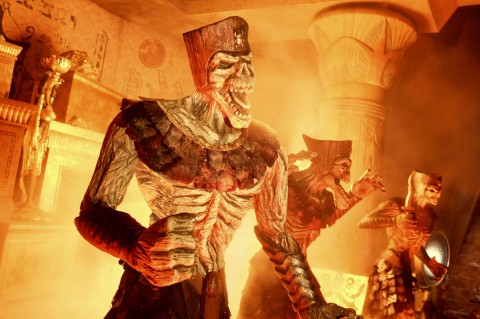 If you ask today's designers at Imagineering and Universal Creative, there's one thing that's absolutely essential on every attraction; the central focus of each ride; the beating heart and soul of each project: story.

In reality, ride designers relationship to narrative isn't always so cut and dry. Some of Disney's best and most classic rids famously lack coherent or cohesive stories (think, Haunted Mansion, Pirates of the Caribbean, or Epcot's Lost Legends). Sometimes, projects layered with story are detested by fans (think Chester & Hester's Dino-rama or Poseidon's Fury) while rides renowned for their stories, narrative, and world-building are the first to go.

And despite Imagineers' insistence that story is the end-all-be-all of their work today, sometimes story seems to fall by the wayside... Here, we've collected a number of attractions with nonsensical, non sequitor, and just plain dumb decisions, strange stories, and incomprehensible narratives... Though we may love these rides and attractions individually, there's just no denying that for all their talk about story, designers seem to have forgotten about it when it comes to this group... But does it matter? Or are theme parks about letting go and enjoying without nit-picking the details? We'll let you decide...

1. Harry Potter and the Forbidden Journey

As odd as it sounds, one of the most confusing and confounding ride stories on Earth is found on a ride considered among the best! When Harry Potter and the Forbidden Journey made its debut in 2010, it was the centerpiece anchor of the most sought-after theme park land on Earth. But for all the photorealism and commitment to scale found in Hogsmeade (and the ride's queue, passing through Hogwarts), the ride itself is... well... a narrative mess.

The "excuse" is that guests are visiting Hogwarts for an Open House, where "enchanted benches" will tour us through the castle grounds. But from the first seconds of the ride, chaos descends. This isn't a case of "something goes horribly wrong..." Nope.

Instead, everything goes horribly wrong. In a frenzied dash through the grounds of Hogwarts, guests are unceremoniously flung within inches of Acromantulas, dragons, the Whomping Willow, Dementors, and more. In a matter of three minutes, guests are whipped from the castle itself to the Forbidden Forest, then to the Quidditch Pitch, which somehow leads to the Chamber of Secrets, across the Black Lake, then through the Floo Network back to the Great Hall.

Absolutely none of it makes sense narratively or even spatially. But who cares? Harry Potter and the Forbidden Journey gives fans everything they wanted from their trip to Hogwarts, serving as a "best of" adventure through the magical world. Its follow-up – Harry Potter and the Escape from Gringotts – maintains an almost eyebrow-raising commitment to its narrative, but as a result is typically viewed as being not quite as fun.

Though the 2012 "Re-opening" of Disney California Adventure had reimagined the park's Paradise Pier as a romantic, turn-of-the-century boardwalk filled with seaside Victorian architecture and allusions to classic, pie-eyed Disney characters, Imagineers weren't quite finished. In a surprise announcement at the semi-annual D23 Expo in 2017, it was announced that the land would go under the knife again, emerging as Pixar Pier.

Oddly, Pixar Pier doubles down on the Victorian architecture and completes the historic, atmospheric metamorphosis begun in 2012... but overlays odd, juxtaposed "neighborhoods" themed to The Incredibles, Inside Out, Toy Story, and "other." Talk about "story," it seems that Pixar Pier's "story" is that the Walt Disney Company owns a well-preserved seaside boardwalk and has decided to overlay its high-earning Pixar intellectual properties across the carnival rides there... (Art imitates life, after all!)

The land's centerpiece continues to be the looming white roller coaster that serves as its backdrop. Formerly California Screamin', the ride has been rebranded the Incredicoaster with static mannequins of the Incredibles littered around the course. We actually listed it among our look at the world's "Story Coasters" as we tried to make sense of the paper thin plot. But even Disney owns up to the oddity. In the ride's queue videos that show news coverage of the ride's "dedication," Violet herself rolls her eyes at the idea of their family's name just being slapped onto an old roller coaster. Edna Mode has the answer: "It's called synergy, darling; it's all the rage."

We've got three more examples of unusual theme park stories on the next page...