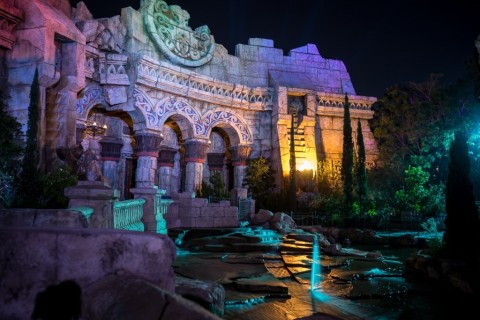 Long ago, in the distant corners of the ancient globe, civilizations were ruled not by order, but by seething dragons, forbidden magic, and jealous gods…

It's the perfect prologue for another timeless entry into Theme Park Tourist's LEGEND LIBRARY – our in-depth collection of must-read stories chronicling the best (and worst) attractions to ever exist – from the Skyway to Jaws; Radiator Springs Racers to DisneyQuest. And yet, today's entry is perhaps the strangest story we've told. An anchor of Universal's Islands of Adventure, the mythological Lost Continent set out to prove that Universal could dispense with its "studio" styling and create immersive fantasy worlds matching Disney's dominance. But forget dueling dragons or living dinosaurs... One of the most talked-about and mysterious elements the new park promised was Poseidon’s Fury.

After two years of declining reviews, Poseidon was sunk… Or so it seemed... A quick (and cheap) fix by a prominent attraction designer is often cited with creating as many problems as it solved, completely reimagining the attraction's plot and characters. Today, we’ll dive deep into the two versions of Poseidon’s Fury that have existed and leave it to you to decide if this sinking story is a legend or a disaster... and what should happen next.

As frequent readers of our Legend Library entries know, the story of any failed theme park attraction always begins long before the first guests ever step through its doors. Ironically, the prologue to Poseidon’s Fury –like the attraction itself – is of a legendary battle between two all-powerful titans… but in this case, they’re media titans. 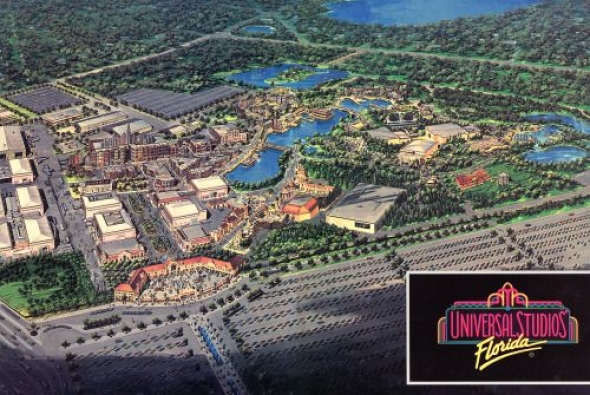 It’s no surprise to industry fans that the “war” between Disney and Universal has been an ongoing struggle for power since the 1980s. That’s when Universal began to get serious about plans for a “studio” themed park in Central Florida, activating Walt Disney World’s defenses as the two film industry giants raced to open their own movie-making parks.

Disney squeaked by a win, opening the Disney-MGM Studios in 1989, followed quickly by Universal Studios Florida in 1990 (followed by other studios jumping into the game, purchasing or constructing a glut of “studio” themed amusement parks through the ‘90s). 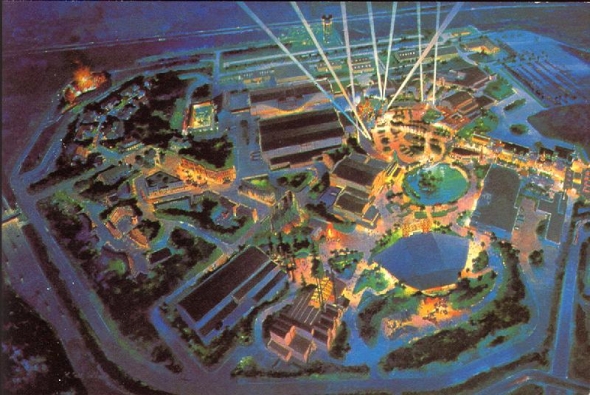 Say what you will about the two studio parks in Florida, but one thing is certain: neither has aged spectacularly well. With the sobering view of hindsight, we can see that “studio” themed parks pretty instantly dated themselves as relics of the ‘90s, with mis-matched intellectual properties, industrial “backlot” design, and beige soundstages acting as a creative (and budget-saving) cop-out. (It’s no accident that both of Orlando’s movie parks have pivoted to “immersive, cinematic” lands that let guests step into movies rather than going behind-the-scenes of them.)

It’s also why – less than a decade out from each studio park’s opening – both Disney and Universal were already hard at work designing follow-ups that would look entirely different. 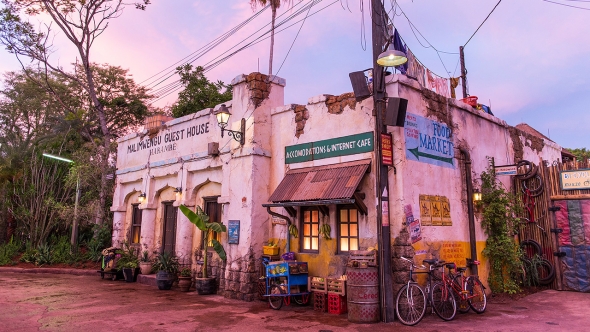 For Disney, the New Millennium would be marked by a new generation of themed design incarnate in Animal Kingdom – a park that dispensed entirely with seeing “behind-the-scenes” in favor of constructing hyperrealistic, immersive, natural worlds rich with detail. Animal Kingdom would be a park based on the universal themes of the intrinsic value of nature and transformation through adventure.

Universal, meanwhile, was quietly concepting a new kind of park all their own; one that would simultaneously solve Universal’s “not-enough-for-families” problem and taking a direct shot at Disney. Their unique “IP park” would’ve assembled themed lands dedicated to Looney Tunes, Batman and Superman, Jay Ward’s “Sunday funnies,” and the highly sought-after Dr. Seuss library into one park called Cartoon World.

At that time, one of the key figures working with Universal was the creative designer and then-former Disney Imagineer Gary Goddard (who, in the mid-2010s, was the subject of sexual assault allegations alongside frequent filmmaking collaborator Bryan Singer). Not only had Goddard topped the credits for Universal’s Lost Legends: Kongfrontation and Terminator 2: 3-D, but Goddard and his Landmark Entertainment would now be called on to create attractions for Cartoon World.

Unfortunately, negotiations with Warner Bros. (owners of DC and the Looney Tunes) fell apart (with those characters instead going to Six Flags). Thankfully, a down-on-its-luck Marvel Comics stepped in, happy to license its superhero characters to Universal in perpetuity (with Goddard designing the Modern Marvel: The Amazing Adventures of Spider-Man as a result). 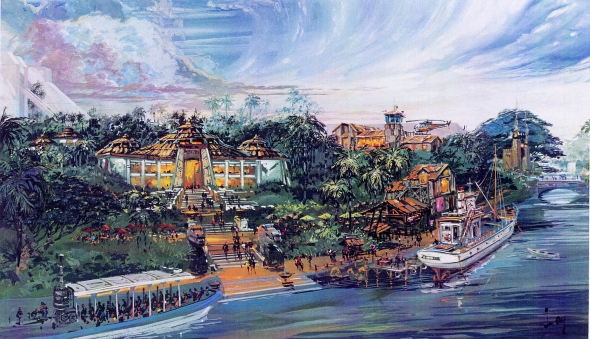 Similarly, Universal’s designers saw the opportunity to duplicate the new Jurassic Park: The Ride (also a Goddard project) from its Hollywood birthplace to the new second gate in Florida, albeit this time as anchor of an entire Jurassic Park land.

It also allegedly opened a spot at the table for designers who’d recently exited Disney, where cost-cutting at Animal Kingdom had axed the Possibilityland: Beastly Kingdom of mythic creatures, allowing those ideas and designers to inspire a land at Universal’s park, instead: a land of myths and legends headlined by one of the park’s signature attractions…

Even as early as 1992, Universal’s designers were beginning to mold the new park, with its attraction lineup taking shape. One of the earliest versions of the attraction we know today as Poseidon’s Fury was Journey to Atlantis – a ride that would’ve looked quite different. Literally. Guests journeying through the “myths and legends” land in the park would’ve stumbled across a gargantuan Atlantean drill having recently erupted up and broken through the earth. Massive scaffolds erected by archaeologists would allow guests to climb to the drill’s top and then descend into it.

Within, it’s believed that the attraction itself would’ve been somewhat like a “madhouse,” with guests seated in a nearly-stationary theater while the massive room would rotate around them, likely designed as to make guests feel that they were indeed tunneling deep through the Earth’s crust and emerging in the ocean with views of the sunken city.

Of course, as the park continued to evolve and take shape, Journey to Atlantis changed, too. According to industry insiders, one of the main drivers of its redevelopment was the emergence of water screens (featured prominently in Disneyland’s Fantasmic, which premiered in 1992) and the French entertainment company ECA2, whose new rain screens could feature cinema-sized projects through water.

In fact, this is about when Universal made a brilliant choice: to overtly recast the new park from a world of cartoons to something much bigger: “The World’s Most Technologically Advanced Theme Park.” Development of the new second gate would now center on featuring never-before-seen technologies pushing the industry forward. From the near-miss computer-powered Dueling Dragons to the interactive animatronics of the Triceratops Encounter and the headlining ride system behind Spider-Man, technology would be the unifying feature of this 21st century park.

And that went for Journey to Atlantis, too… By mixing a tried-and-true Universal special effects spectacular with the world’s largest installation of rain curtains and water screens, Universal could reposition a Journey to Atlantis attraction as a headlining technological marvel. Oh, and they’d found one last ingredient to bring it to the next level...

Technifex, an industry effects leader, was brought in to develop something big. The video above shows Technifex testing something unusual: a portal formed entirely of water blasted across the inside of a ring, with engineers able to pass through. Universal’s request? Turn the mere ring into a 40-foot long tunnel that guests could walk through.

The "Vortex" that would be the highlight of the attraction became Universal's centering purpose for the show; the iconic element that would perfectly embed unthinkable technology in an ancient story. (Perhaps to its detriment... in fact, you might argue that the entire experience is built around the Vortex, so much so that the story to get there was a somewhat contrived way to force the experience in.) No matter; the tested concept revealed that, by blasting water at more than 100 miles per hour, the "Vortex" could indeed form around an 18-foot diameter tunnel... and that guests could even touch it (though the fast-moving water would instantly blast their hand away).

With a special effects show as its finale and the walkthrough water tunnel as the must-have technological highlight to get there, the new Journey to Atlantis evolved in concept to grow closer to the attraction we know today. Now all they needed was a story to bring it all together… Read on…