Even by summer 1995, Journey to Atlantis had firmly been reimagined as walking tour blended with a special effects show, dark ride, and nighttime spectacular. We know because of early scripts for the attraction written that September. 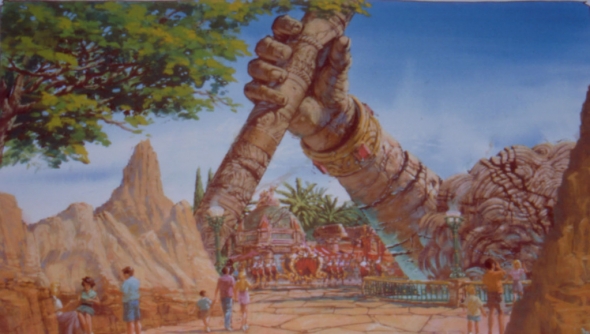 In this early version of the attraction, guests would’ve been guided through the temple by an enigmatic (and slightly kooky) old man named “The Keeper,” whose rambling and comedic exposition would set up the premise: that the ancient temple in which guests stood was said to hold the key to the fate of Atlantis. After some audience participation, the Keeper would usher guests through a secret passage and into a new chamber, overseen by an ancient Oracle made of wispy flames. This ancient Oracle would deem the crowd worthy of being “The Chosen” and bestow upon them the strength to journey to Atlantis.

Naturally, that would open the ancient portal to the ocean’s depths (the swirling vortex tunnel) where a second actor – Neoprene, Ambassador of Atlantis – would take over, leading guests into an Atlantean submarine. A brief simulator experience would appear to carry guests deeper into the sea, ultimately docking in the submerged Atlantis and disembarking into the Temple of Poseidon. 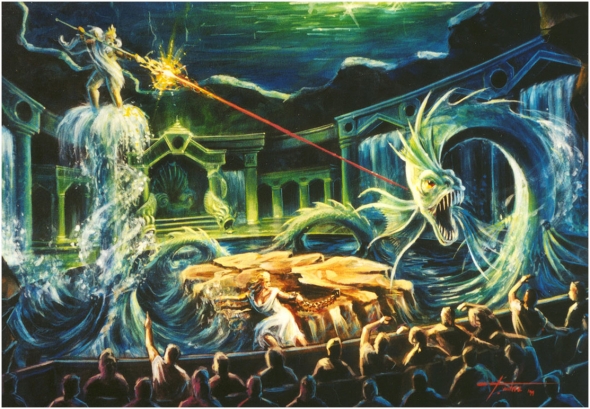 There, the finale effects show would take place – an atmospheric, artistic, and almost-abstract showing of Poseidon’s rage. The god – brought to life as a massive, disembodied, watery face projected on water screens – would awaken serpents made of water, orchestrating a dangerous and poetic show of bursting steam, flames, and fountains. In the vein of Twister… Ride It Out (whose development was also in concept), Poseidon’s fury would crack the temple’s columns and send ancient Atlantean domes flying toward standing guests.

And it would all culminate with one of the most sensational technology showings yet. With Poseidon’s face projected on a massive water screen, the god would laugh, content that we mere mortals now knew his power. Then, opening his mouth, a massive release of fog would blast through the fountain and completely encase the audience in a matter of seconds (think “It’s Tough to be a Bug”). With only magical sparks of light in the dark, the temple would quiet… and then, lights would return to show that guests had been “magically” transported back to the Oracle’s chamber on the other side of the Vortex!

There, the Keeper would be waiting, glad to know that Poseidon had spared us and returned us back to the surface. The mystifying and marvelous Journey to Atlantis would indeed have been sold as one of the technological marvels of the new Universal park. But first, some wrinkles needed ironed out.

Whose islands? Whose journey?

Thanks to the input of a new influx of designers and concepts, Cartoon World had been left on the cutting room floor. Sure, the new park would still feature Dr. Seuss’s works, as well as the comic strip characters of Jay Ward. But the new Marvel Super Hero Island would be joined by Jurassic Park, the exotic Port of Entry, and the mystic Lost Continent – each land offering at least one attraction to qualify as a “Technological Wonder.”

Forget studios; forget moviemaking; forget seeing “behind the scenes.” This new park would propel guests into stories, books, legends, and comics, brilliantly arranged in a completely new format: thematic or immersive “islands” situated around a central lagoon, connected by bridges that would act like hard cuts, “flashing” guests between literary worlds. And in keeping with the idea of setting out to explore these exotic worlds, Universal had developed a succinct name to describe the park and its uniquely exploratory aura: Islands of Adventure. 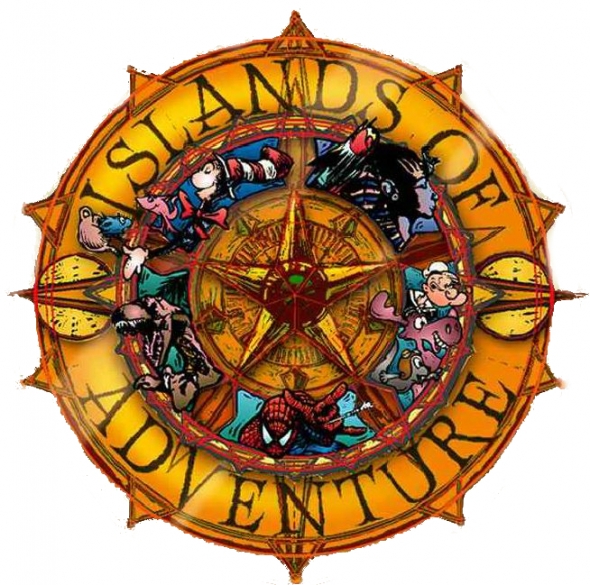 There was just one problem. Fellow park operators Busch Entertainment (then owners of SeaWorld and Busch Gardens) allegedly objected to the name “Islands of Adventure” on the grounds that it infringed upon their copyright – the name of their nearby Tampa Bay waterpark, Adventure Isle. They allegedly asserted in a letter to Universal that the names were similar enough that a reasonable person might not recognize the difference.

Universal’s new park’s identity seemed to be at a creative impasse. Except that Busch’s SeaWorld Orlando just a few miles away was in the final stages of designing a new attraction of their own. SeaWorld had purchased a custom Mack Rides water coaster and constructed around it an elaborate showbuilding disguised as the risen sandstone palace of Atlantis. 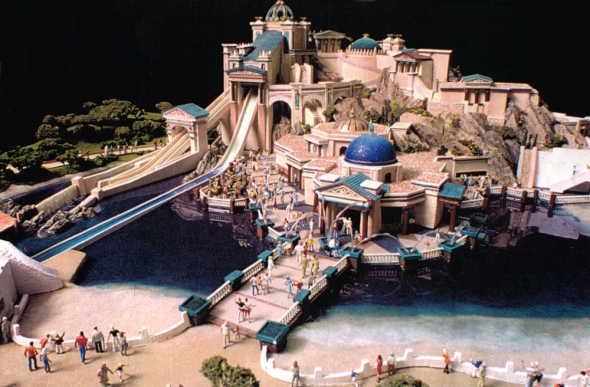 This new attraction was positioned to elevate SeaWorld from a mere marine life park to a true theme park, matching Disney’s storytelling. On board, guests would sail through the sinking city and be caught in a battle between an ancient siren hellbent on their destruction and a golden guardian seahorse sent to save them.

The only problem is that potential names tested for the attraction weren’t going over well with surveyed audiences. The name Busch really liked? Journey to Atlantis. 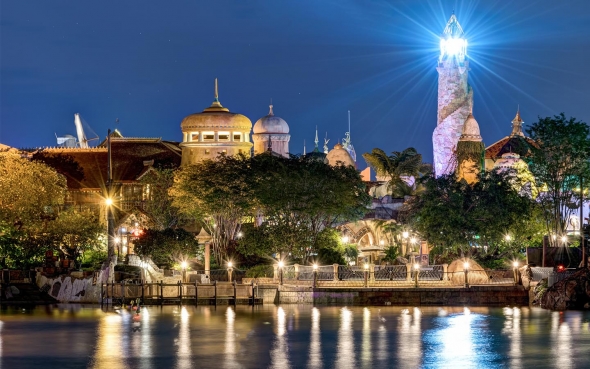 And so, if you believe the story, Universal and Busch made a pact. Universal handed over the trademark they’d acquired to SeaWorld, thus providing the name for the Declassified Disaster: Journey to Atlantis; meanwhile Busch agreed to back off their threats against Universal and allow their new park to officially be announced as Universal Studios Islands of Adventure.

Given that Universal’s planned attraction would’ve culminated in a massive, almost-abstract special effects extravaganza based on the raw power of the sea god’s rage, they developed a new title – Poseidon’s Fury: Escape from the Lost City. But as tends to happen, the “Blue Sky” version of Universal’s Atlantis attraction didn’t quite make it to the finish line... 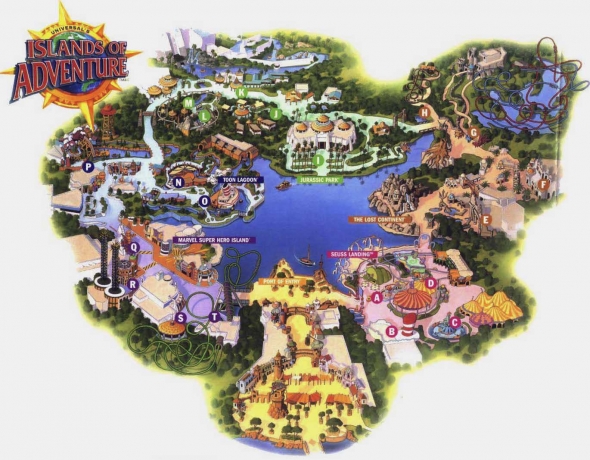 So what did guests find when Universal’s Islands of Adventure opened in May, 1999?

First, they discovered the Lost Continent. To be clear, this is the kind of land we’re not likely to ever see again from either Disney or Universal; an entirely original world constructed not from a blockbuster IP, but from the minds of designers merging with the myths of old. Show produced by Universal’s Amelia Gordon (today, Executive Producer at Universal Creative) who was brought in late in the land’s formation, the land’s ancient and monumental look disguises the speed at which it was assembled. 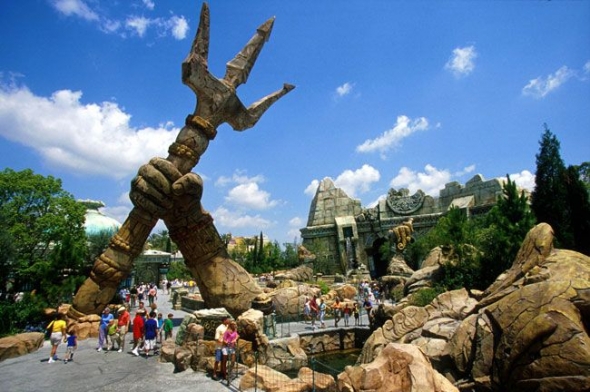 Though the Lost Continent is comprised of three “mini-lands” (including the Medieval Merlinwood and the Middle Eastern Sinbad’s Bazaar), it’s the Lost City that’s most impressive. Here, guests step into the ancient waterlogged ruins of an unthinkable civilization. As water cascades from the mouths of carved figures atop the mountainous Mythos restaurant, the icon of the land (and indeed, perhaps the park) must be the toppled colossus of Poseidon, with massive remnants of the fallen god scattered around the Lost City. The figure’s towering Trident – still gripped in his arm – stands sentinel over the craggily, upheaved earth with water flowing down thin, lifted sheets of crust as if great seismic activity was at work. 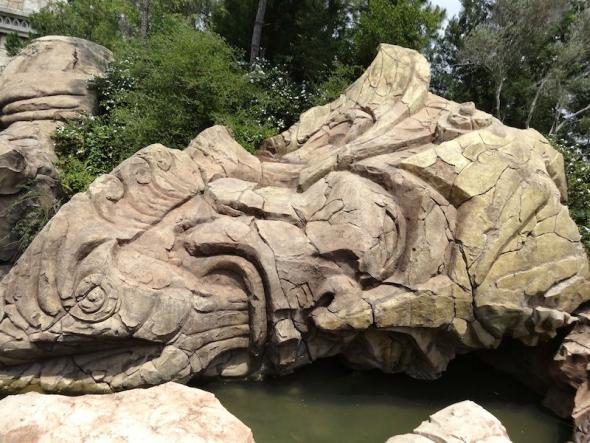 The ancient Poseidon must’ve stood a hundred feet tall, its stone feet still astride on either side of the cascading rotunda. But now, its stone head lies on its side in a bubbling spring nearby – the scowling face and sharp nose of Poseidon himself, with fishy finned ears, tentacle hair, and a three-pronged crown.

But beyond is an equally impressive icon: the Temple of Poseidon – an oddly hypnotic, asymmetrical ruin, half-collapsed, marked by massive stone arches with flickering chandeliers beyond. The temple is flanked by ancient sea creature statues, one of which gurgles out water that splatters into a stone basin below; its twin looks as if it’s run dry for centuries, with flames crackling in its basin instead. 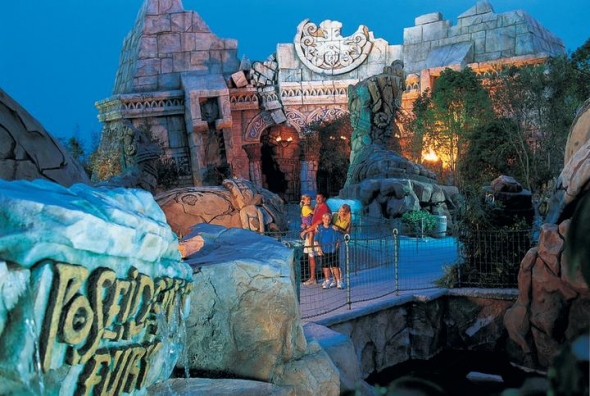 Like any ancient or natural wonder, it’s difficult to capture the scale of this temple in photographs; to understand just how soaring its ancient towers are. And among the upheaved ancient rocks at its entry, one reads “Poseidon’s Fury: Escape from the Lost City,” with water pouring out through holes in the ancient rock.

Despite its ancient appearance, Universal’s (pre-social-media) viral lead-up to the park’s opening promised that Poseidon’s Fury was one of the key attractions in the park; one of the anchors that earned the park its “Most Technologically Advanced Theme Park on Earth” designation. And they were right… even if the attraction guests saw was considered one of the biggest flops in the industry.

On the next page, we’ll head into the original Poseidon’s Fury, see why Universal closed it after less than two years, then explore the quick-fix changes Universal made to completely rewrite the tale from scratch. Read on…