What you've got: One live actor; a "story" room; an Oracle Chamber; a Vortex; a special effects battle in an undersea temple; a “teleportation” effect to send guests back a step.

What you need to solve: An unclear setting in time and place. An unreal “host.” Lagging “load-in” time in the final chamber, allowing guests to see it under work lighting. A lack of danger and peril. No “role” in the story other than passive observers.

These are the ingredients handed to Gary Goddard and Landmark Entertainment. As we discussed, Gary had worked wonders with Universal before, crafting Jurassic Park: The Ride, Terminator 2: 3-D, and the Amazing Adventures of Spider-Man. Now, he was given just twelve weeks and a paltry budget and asked to reshape Poseidon’s Fury to improve guest satisfaction with the show. Here's what he came up with.

First, Gary Goddard notes that he initially proposed the attraction's name change from Poseidon's Fury to the Haunted Temple of Poseidon – a name that he thought would better convey the walkthrough experience while also drawing connections to Universal's famed Halloween Horror Nights experiences. At least in that regard, he lost. But despite the carried-over name, the new Poseidon's Fury that debuted in June 2001 was an almost-complete reinvention from the original. 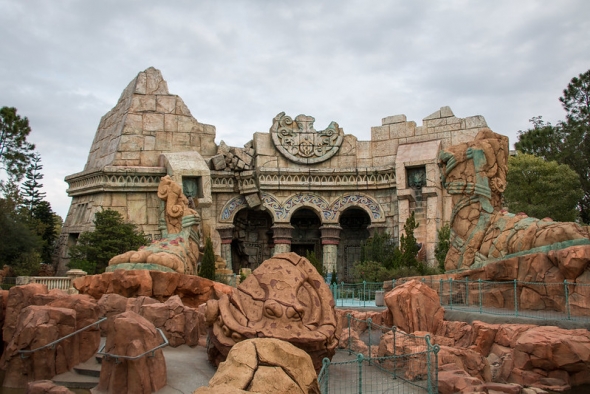 Even from the start, small but important changes can be observed. For one, the attraction's wait time sign now reads "TOUR DEPARTS," while the cast around the elaborate facade have traded ancient cloaks for khaki explorer outfits (a la Indiana Jones Adventure). A-ha! I sense a clear expectation of what to expect (a tour) and a motivation! The time? 1930s. Our role? Adventurers brought here to the ruins of the Temple of Poseidon, where the Global Discovery Group (think Disney's S.E.A.: Society of Explorers and Adventurers) have made a remarkable discovery...

And indeed, the queue has been rewired to replace ancient torches with excavation lights. Throughout the queue, the Global Discovery Group has left informational signs (pre-reading... not always a good sign) to get some of the exposition out of the way. This Temple of Poseidon, they claim, was where believers from around the ancient world came to worship the lord of the seas. It's even said that the temple contains an ancient and mystical connection to the ocean... But something happened here centuries ago that cursed the temple and closed the oceanic connection for good, and it's never been found. 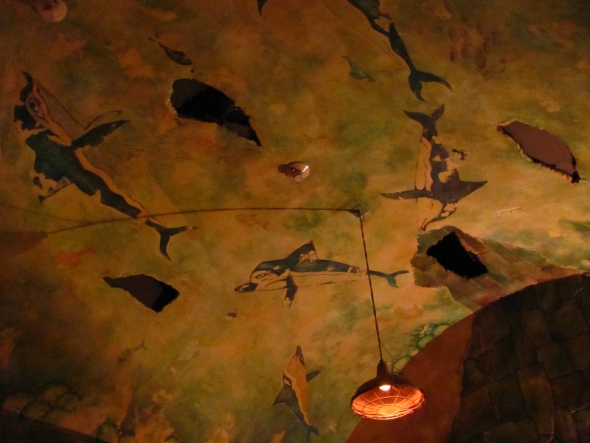 As before, the tour begins in the mural chamber but this time, our guide is Taylor – a young, hapless intern of the GDG. Though he'd rather wait for Professor Baxter (a clever nod to one of Gary Goddard's former Imagineering coworkers...) to return from exploring the temple, Taylor will at least tell us the basics. According to legend, the dark history of this temple can be traced to a jealous high priest of Poseidon's named Lord Darkenon. Excavation lights and flashlights help Taylor show the murals above. (Interestingly, the Poseidon mural is the repurposed Zeus mural from the original, simply having replaced his lightning bolt with a Trident; the Darkenon mural is original, completely replacing the merman Poseidon.)

If you believe the stories, centuries ago, Darkenon sealed this very chamber and slaughtered the worshipers inside as a sacrifice, hoping to gain dark powers to challenge Poseidon and take the Trident for his own. In the ensuing battle, the all-powerful Trident was lost and both Poseidon and Darkenon were sealed away. And in fact, they say that the god's rage at his priest's betrayal still reverberates through the walls, earning the temple the nickname Poseidon's fury... (Thought-provokingly supposing that "fury" might be a synonym for "temple"). 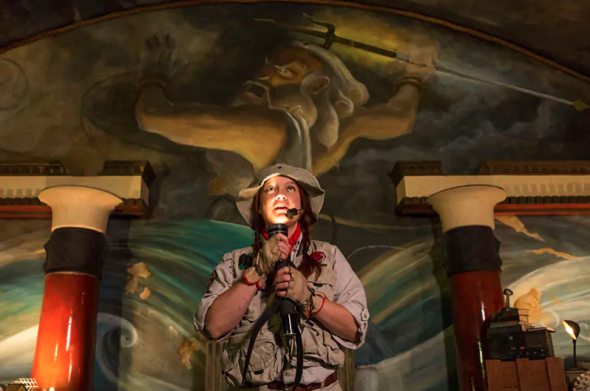 Naturally, a distress call through the radio from Professor Baxter instructs him to "get those people out, NOW!" before the power cuts out. When Taylor returns with a high-powered UV light, writing is revealed on the walls around the chamber. As a new, compelling, and haunting musical score begins, Taylor reads:

Behind this wall, a demon sleeps;
An ancient evil held in keep.
Poseidon's power contained the beast,
But he, too, perished when battle ceased.
Let none disturb this chamber wall
Or loose the dark and then lose all,
But if this evil should be released,
Then seek the Trident; restore the peace.
For he who holds the Trident gold
Has Poseidon's power for all time told. 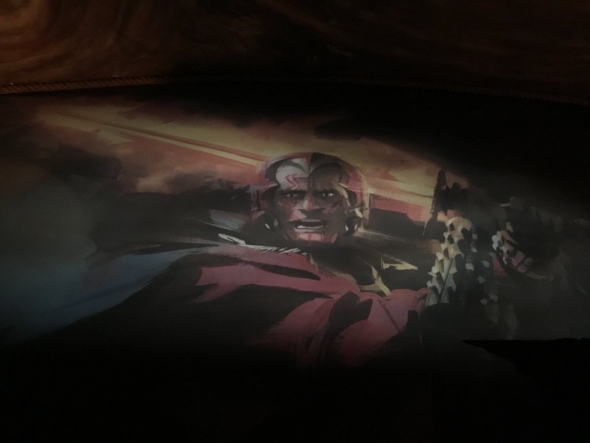 With a rumble, the speaking of the spell awakens the ancient spirit of Darkenon, kept alive in the temple's walls. Offering a chance to follow Professor Baxter, Darkenon invites the crowd to follow in his steps, with the sliding wall revealing the second chamber.

But now, the Oracle's chamber has changed. It's the Chamber of Death – a room of dusty gold and red lighting, with ancient treasures piled around – but covered in rotted skeletons. It's here that Darkenon's disembodied, booming voice (played by Jeffrey Combs) makes an offer: "Bring me Poseidon's Trident, or die." As poison gas begins to fill the room, Taylor's attempts to pry the door open unsurprisingly end in his stumbling upon the Trident, awakening an ancient goddess (played by Christina Pickles) projected above the Vortex gate. (Surely, less hypnotic than the crystalline Oracle, but compelling nonetheless.) Possessing the Trident, we're due one favor. "We'd like to go home!" Taylor says.

"Alas, the Dark One has sealed this chamber with a locking spell impervious to magic. The way home is now impossible. But all is not lost. Though I cannot grant you passage back to your world, I can provide you with safe passage deeper into this temple, into the Chamber of Poseidon. Bearer of the Trident gold, are you brave enough to make the passage under?"

As Taylor rallies the audience, the Goddess speaks as a swirling, goosebumps-inducing musical score (perhaps worth the reimagining in and of itself) begins and the door's revolving locks begin to spin.

"Lord of the Seas, I ask for your care.
Safe passage grant for those who dare.
Open up your oceans, swing wide the door!
Let the waters rush and the oceans roar!
For now is the time, with fortune unplanned,
Your Trident comes home... returned to your hand."

As the music swells, the door rolls aside. "Move quickly, for I cannot maintain its power for long!"

Taylor nervously guides guests through the Vortex and into... a room blocked by another gate. The "teleportation" effect of the original has, in effect, been reversed, with us arriving in a new, small chamber that looks somewhat like the room we just escaped. Indeed, the observant will note that though this room similar to the Chamber of Death, it's identical to the old Oracle's Chamber, complete with the crystal oracle above, the locked vortex gate, and the oceanic lighting of blues and pinks... It's into this room that guests gather, as Taylor tries in vain to use the Trident once more to unlock the sealed gate ahead.

Naturally, only the arrival of Poseidon can help. The disembodied voice tells us we've done well... but Darkenon's voice now arrives, too, and in a blinding flash, the room transforms. I 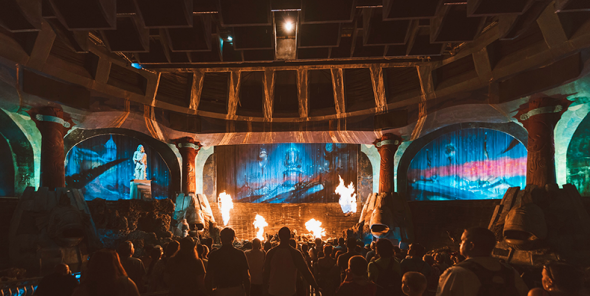 In pitch black darkness, we see an octopus swim away, with the light of the undersea world suddenly appearing through the "windows" of the undersea world (a brilliant reveal of the massive finale chamber). Darkenon is here "in the flesh" (on screen), threatening us with fire and requiring the Trident. Taylor instead climbs to a rocky height, where Poseidon is frozen as a statue.

"Give me that Trident!" Darkenon cries.

"Take it from him!" Placing the Trident into Poseidon's hands, the statue glows, then sinks away with Poseidon appearing on-screen himself. The two characters (played by live actors) battle it out for a few moments, setting off fire and water effects as before. With Darkenon predictably vanquished, Poseidon grants us passage back to our world. In a flash, we're returned to the Oracle's Chamber again, where Taylor and Professor Baxter thank us for our bravery and guests exit.

Of course, we encourage you to take a break and watch the best low-light video full walk-through we can find of the "new" Poseidon's Fury. Even just scanning, you can likely make out a new atmosphere for the attraction as well as seeing how restaging and re-pacing the attraction keeps lighting and sound in show-mode, even in transitions (but note that the water Vortex did not form during this showing):

Perhaps only now, on your way out, will you note that the Poseidon statue crumbled outside and the gold Poseidon holding the sign for the "Treasures of Poseidon" souvenir shop doesn't look at all like the old man with a white beard in a superhero outfit you just saw... In fact, both display the old, merman Poseidon. Oops!

So was Poseidon's Fury fixed? Or did Gary Goddard's rewrite cause as many problems as it solved?

When the "new" Poseidon's Fury debuted in 2001, it was the subject of much discussion among fans. Had Universal salvaged the waterlogged show, or sank it? Why did Gary Goddard make the choices he did when he directed and creative produced the new show? Believe it or not, we've got his answers.... Read on...