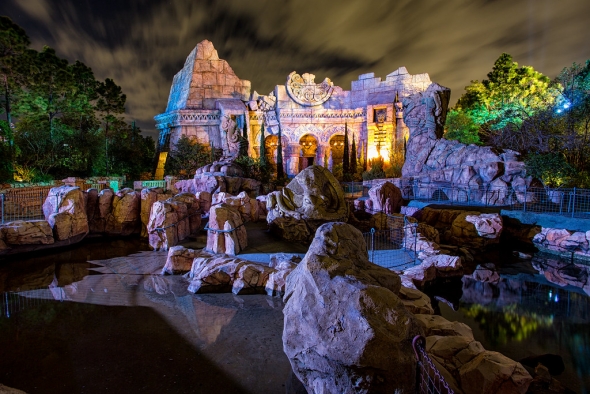 If there's one thing the exterior for Poseidon's Fury excels at, it's setting expectations high. Only adding to the attraction's mysterious and mythical nature are Universal team members who, when positioned at this attraction, may choose to wear dark robes, floating around the temple like ancient wraiths... 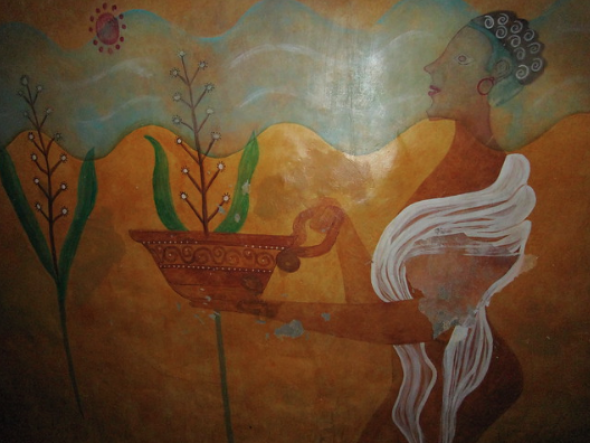 Together, those unusual elements are enough to draw guests in... even if they're not entirely sure what it is they're queuing for. Thankfully, the winding, stone queue that descends into the temple's heart at least provides a hint, with clever murals of ancient people bringing offerings deeper into the temple alongside waiting guests. But these unique frescoes are, in places, chipped away, revealing aquatic scenes beneath, long-since covered... It's a clever hint that there's more here than meets the eye.

Finally, you're admitted to the Mural Chamber – a dark room lit only by flickering lanters. Luckily, our guide emerges from a hovel on the wall, scurrying down a ladder. The old, hunched-over man with a curling white beard introduces himself as the Keeper – for he holds the tales of this ancient temple... 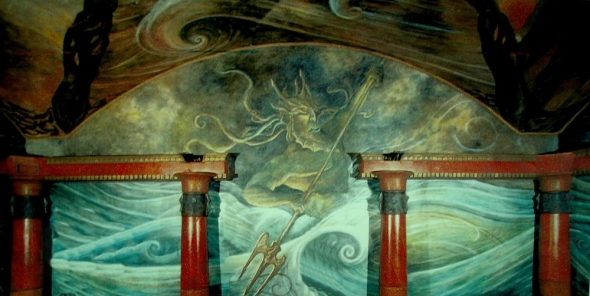 And in particular, of an ancient battle long ago, where the beloved king of the gods, Zeus, was challenged for dominance by his brother, Poseidon, who threatened to flood the world to show his superiority. As the Keeper's tale unfolds, inexplicable lighting and sounds sweep across the room, illuminating ancient murals on the vaulted ceiling – one of the righteous Zeus, lightning bolt reared back, and - opposite - the serpentine, green-skinned Poseidon... the same figure whose head we saw outside.

The Keeper next invites us into a second chamber, built around a massive stone doorway – its concentric circular locks misaligned and sealed. Above it is a large gem in the center of an octopode carving. Our entrance into this chamber has awakened the Oracle... Emissary of Atlantis – a rear-projected face viewed through the crystal. It turns out that the Oracle isn't exactly on Zeus's side... She offers the Keeper (and us) an audience with Poseidon in his home deep in Atlantis where he's been imprisoned since the battle. And there's just one way to get there.

As the shimmering Oracle begins to recite a spell, the interlocking circles of the portal begin to twist and align, with lasers forming animated shapes throughout.

"Sea of serpents, oceans wide, Abate your dark and drowning tide; Open hearts on sea and land For Poseidon's greatness to command; For with each twist and every turn, The moment nears of his return To set at last the fate of men, As Lord Poseidon rules again." 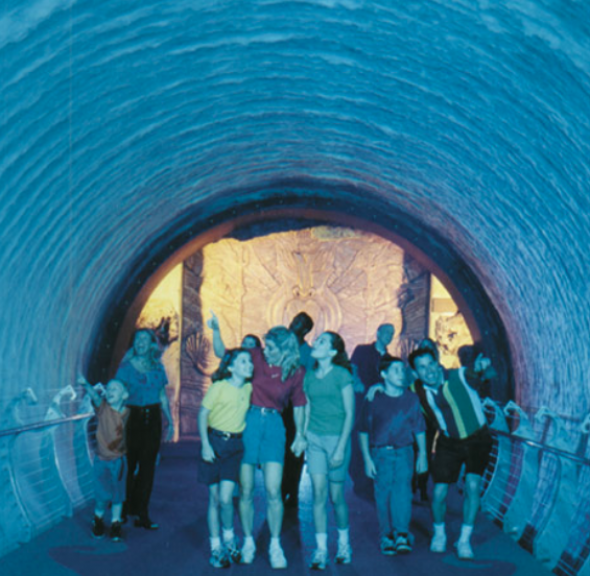 As the final tumblers lock into place, the Oracle instructs, "Once the Vortex has formed, make haste quickly through, for it cannot remain for long." The massive stone door rumbles to life, rolling aside as steam escapes from within. Then, a torrential wave of water washes across the path ahead, growing in strength until it overcomes the bridge through the tunnel, "sticking" to the walls and forming the portal to Atlantis.

Once inside, guests find themselves in the massive, cavernous Chamber of Poseidon, with a multi-stepped pool of water ahead and large "windows" into the ocean all around (temporarily displaying "bubble" screenscavers until all guests have safely taken their places). Once all guests have entered, the show begins as the Keeper steps out into the rocky pools, climbing higher in the temple. Then, through the "windows," Poseidon appears – an animated character voiced by the unimitable Jeremy Irons (legendary actor and iconic voice behind The Lion King's Scar).

When the Keeper announces he's come to clear things up about Zeus, Poseidon flies into a rage. "You dare not mention that name!" He cries, slapping water that erupts in the temple. Suddenly, "rain screens" fall all around guests, seemingly transporting Poseidon into the room, projected just in front of guests. Then – in one of the most memorable sights – Poseidon was projected all around guests in dozens of incarnations, as if projected through a crystal or kaleidoscope. He speaks directly to the gathered crowd: "Soon, you will join my army, and we will rise up and crush Zeus once and for all." 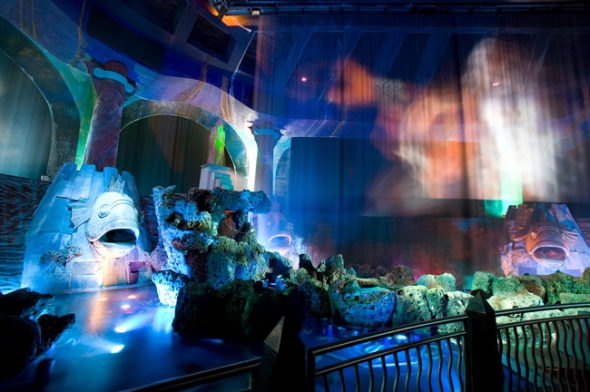 "I cannot allow that to happen!" The Keeper cries, now standing upright.

"Really? And just what do you intend to do about it?" Poseidon mocks.

At once, the Keeper disappears, replaced by an animated Zeus on screen. A full-on special effects battle follows, with Zeus harnassing fire against Poseidon's water in the cavernous temple just in front of guests. 25-foot fireballs blast, singeing skin with heat quelled only by Poseidon's retaliatory bursts of steam and mist.

"Ancient titans of Heaven and Earth, Restore these mortals to the land of their birth. For mercy's sake I call on thee, Deliver them from beneath the sea. Lest not we tend an ocean grave, I call upon their lives to save!" 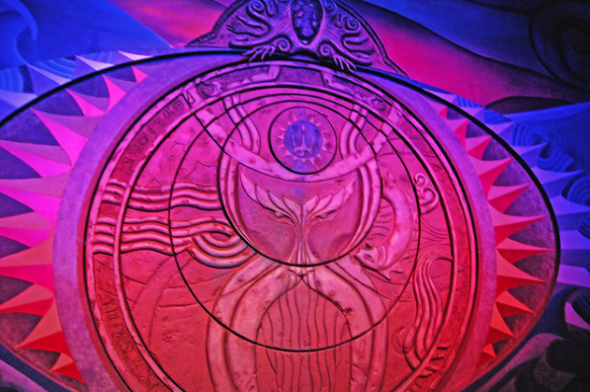 As steam, then darkness overcomes the chamber, the lights return to show... that we're back in the Oracle's Chamber! Initially, merely Zeus's disembodied voice would indicate that we'd survived, but this finale didn't test well, leaving guests confused about if the attraction was over, unsure of what to do next, and not noticing or appreciating that they'd "traveled back" to a previous room. For a while, the Keeper would reappear, his latern breaking the darkness as he'd show the returned vortex portal and say, "Well, that looks familiar!" – a winking nod to the "teleportation" effect allowing the Keeper to then escort guests out.

Though the "original" Poseidon's Fury is practically a legend, mostly unrecorded, a single video of the experience exists – and it's unexpectedly clear, too! However, this walkthrough does omit chunks of the experience, getting across just the key moments. Be sure to check it out:

Poseidon's Fury was impressive in scale... but it was not the headlining attraction Universal had promised... Don't worry; we'll explain why.

Late in the attraction’s development, the fate of Poseidon’s Fury had been handed to Universal Show Producer Amelia Gordon. Amelia’s job was to manage the creative development needed to get Poseidon’s Fury over the finish line in time for the park’s opening… and on a strict budget, to boot. Obviously, there are incredibly compelling elements of the Poseidon’s Fury show that Amelia and her team inherited.

As evidence, it continued to be a marketing highlight of the new park and an oft-cited example of its astounding technological breakthroughs:

From a guest point-of-view, visitors reported that the attraction was confusing and muddled; it was hard to understand in terms of both light and sound, with only torches and "magical" light effects able to illuminate necessary paintings and carvings; that it felt like the first two rooms were nothing but overcomplicated exposition; that its conclusion, too, was difficult to follow. As celebrated as the final “teleportation” effect was, it seemed that few guests even registered that the illusion was meant to make them feel they’d moved “back” a room. In short, audiences seemed to leave Poseidon’s Fury shellshocked. “...Is it over?” It didn't feel like an experience to match the impressive exterior.

From a story writer and experience designer's point-of-view, it had a few equally-glaring errors. 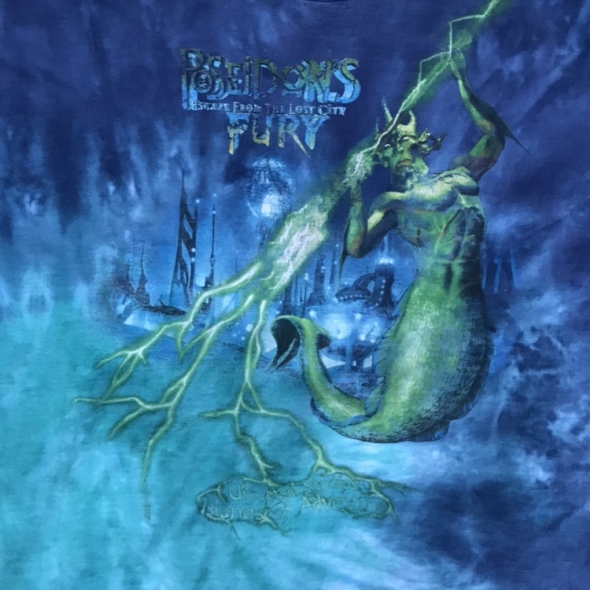 Think you've got it figured out? What would you do? Something needed to change, and to reverse the sinking of their multi-million dollar technological marvel, Universal had to call in the big guns. On the next page, we'll show you exactly what designers had to work with and how they set out to salvage Poseidon's Fury.