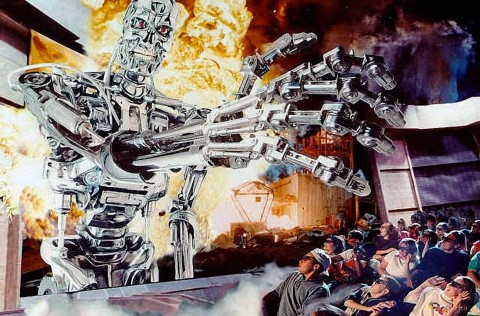 Believe it or not, Central Florida has been a battleground since 1990. That's when Universal Studios Florida opened, officially setting Walt Disney World and Universal Orlando on a back-and-forth battle to attract visitors to their respective parks. You might agree that Disney's cornered the market on fairytales and fantasy; nighttime spectaculars; meet-and-greets; and certainly, family dark rides.

But you won’t find anyone who can do larger-than-life special effects spectacles quite like Universal, and for years, their parks hosted perhaps the most revolutionary, massive, all-encompassing attraction ever. T2 3-D: Battle Across Time was a genuine Hollywood treasure… a $60 million mini-sequel to a box-office shattering film franchise that defined the ‘80s and ‘90s. 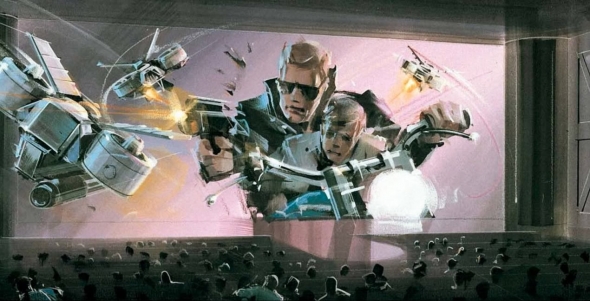 Of course, if it's a year post-2000, it's probably a year that at least one legendary Universal attraction has bit the dust. And like so many of Universal’s classics, T2 3-D is now officially gone, with its valuable real estate set aside for whatever’s new, now, and next. Today, we’ll dive into the behind-the-scenes of this James Cameron-helmed, star-studded extravaganza, relive the experience first-hand, and predict what’s to come at Universal Parks and Resorts. Many of our Lost Legends entries begin years before the attraction opens, but today’s feature instead starts decades after… 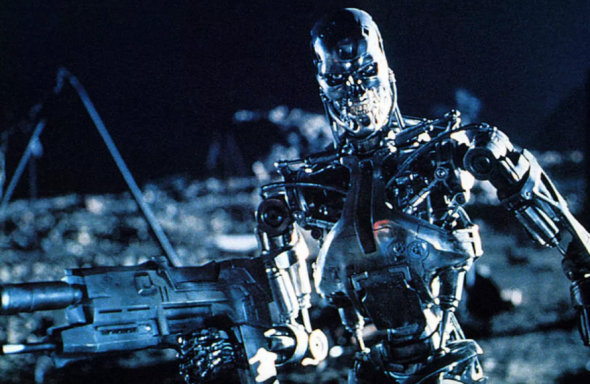 2029… Earth is a post-apocalyptic wasteland. The steaming, gritty, urban wreckage that remains looks (appropriately) like the grim, polluted, desolate visions of the future popularized in the 1980s. There (or perhaps, then), humanoid cyborgs called “terminators” scour the desolate ruins seeking out the remote human factions that remain to exterminate them. It’s humanity’s own fault, though, because…

1997… As a contractor for the U.S. government, technology pioneer Cyberdyne Systems develops Skynet, an artificial intelligence defense system able to manage the country’s nuclear arsenal. Learning at a geometric rate, Skynet begins to connect to and overtake the United States’ military computer systems. As its programmers try to shut it down, Skynet reaches self-awareness, deems humanity a threat, and launches all of the country’s nuclear weapons in unison… “Judgment Day.”

1984…. Prince’s “When Doves Cry,” Tina Turner’s “What’s Love Got to do With It” and Lionel Richie’s “Hello” top the charts; Ghostbusters, Gremlins, and Indiana Jones and the Temple of Doom light up the big screen; Ronald Reagan and Walter Mondale fight it out for the presidency. It’s also the year that the machines arrived… 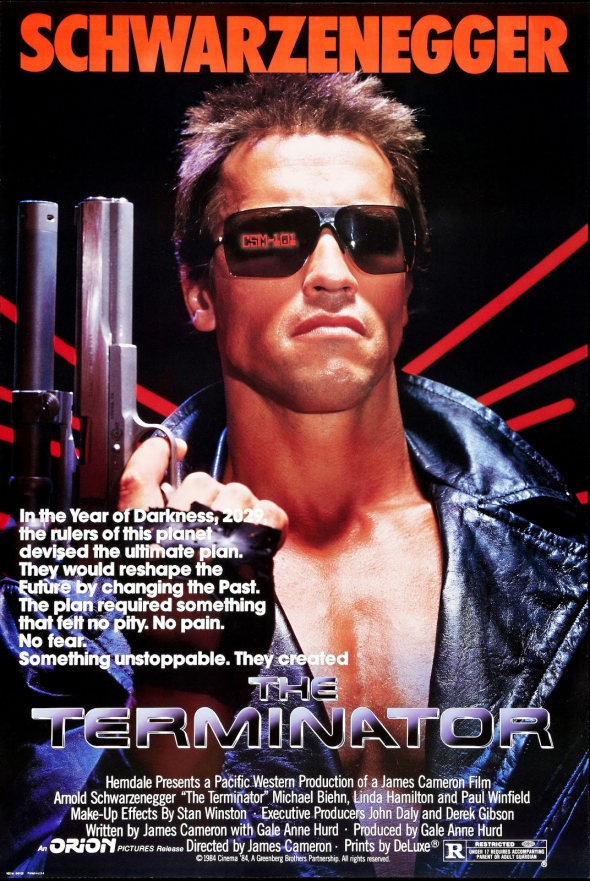 The Terminator premiered October 1984 as the directorial debut of a little-known filmmaker named James Cameron. The 1984 film – set in the same year – follows one particular humanoid T-800 terminator (played by Arnold Schwarzenegger) sent back in time from 2029 to assassinate a woman named Sarah Connor (played by Linda Hamilton) who, to her surprise, is destined to give birth to a Resistance fighter who will defeat Skynet and save the world… unless the time-traveling Terminator can kill her first.

The Terminator became an international blockbuster, earning $78 million (against a $6 million budget), universal critical acclaim for its action and special effects, and preservation in the Library of Congress for being "culturally, historically, or aesthetically significant." It singlehandedly rocketed both James Cameron and Arnold Schwarzenegger into massive action careers, and (of course) spawned a catalogue of spin-offs and sequels.

Which brings us forward in time… 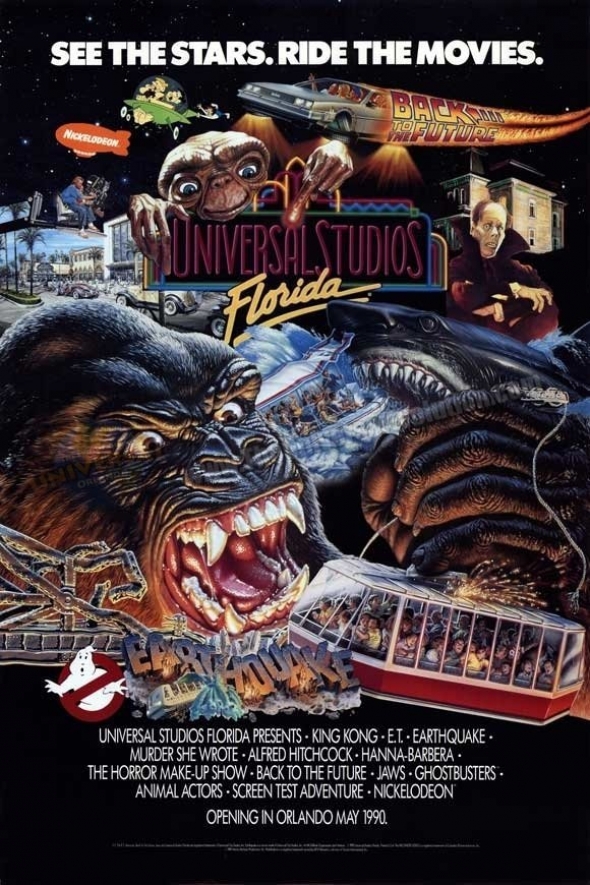 When Universal Studios Florida opened in June 1990, its very existence was an act of resistance. Though Universal’s world famous Studio Tour had been carting guests through the actual, real, storied backlots of their working movie studios in Hollywood for decades, a Universal Studios Florida would be an obvious, outright attempt to break into the market created by Walt Disney World. The plans had been scrapped time and time again through the 1980s up until Stephen Spielberg recommended a fellow Lost Legend: Back to the Future – The Ride, which served to empower the concept and green-lit its announcement.

So when their Universal Studios Florida began construction, it was a David against an established, 47-square mile Goliath. And to make matters worse, Disney’s still-new CEO Michael Eisner (who was born and bred in the film industry as CEO of Paramount) had gotten wind of Universal’s gutsy plans for a movie-themed park in Disney’s backyard and initiated his own preemptive strike, announcing and opening the Disney-MGM Studios right as Universal’s park went into production.

And of course, not only did Disney unapologetically nab Universal’s movie motif… the new Disney-MGM Studios also stole the concept of a headlining Studio Tour through production facilities and past staged special effects encounters!

Universal was forced back to the drawing board and made a brilliant decision: slicing away the individual elements of its Californian Studio Tour and growing each staged encounter into full, standalone attractions. We’re proud to have told that story in-depth as it applies to other entries in our series, Lost Legends: JAWS and Kongfrontation.

Universal had made a name for itself in its action-oriented disaster rides, placing guests face-to-tooth with monstrous sharks, a raging ape, snarling dinosaurs, disastrous earthquakes, and more, and just as the park opened, a new name in action came to the forefront of pop culture… 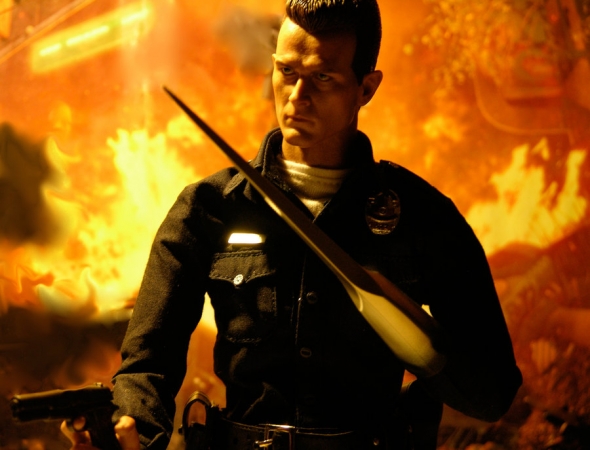 Terminator 2: Judgment Day fast-forwards 11 years after the events of Terminator, with a hardened, unstable, vigilante Sarah Connor imprisoned for attempting to blow-up a computer factory, and ten-year-old John Connor (our one-day savior, played by Edward Furlong) raised all his life as a warrior. Having failed to kill Sarah before her son could be born, Skynet sends a new, advanced “liquid metal” Terminator model – the T-1000 – back to 1995 to kill the young John. The poly-alloy villain (played by Robert Patrick) is unstoppable…

Except for one astounding switch. The future John Connor and his Resistance have commandeered and reprogrammed an old, outdated T-800 and sent the rusty Schwarzenegger model to 1995 as well, this time to protect his mother and his own younger self. (“Come with me if you want to live.”)

Over $522 million dollars later, Terminator 2 had proven that the franchise would become a juggernaut to transcend decades. And then and there, Jay Stein (then-Chairman and CEO of Universal Theme Parks) began shopping for concepts to bring Terminator to life at the brand-new Universal Studios Florida. 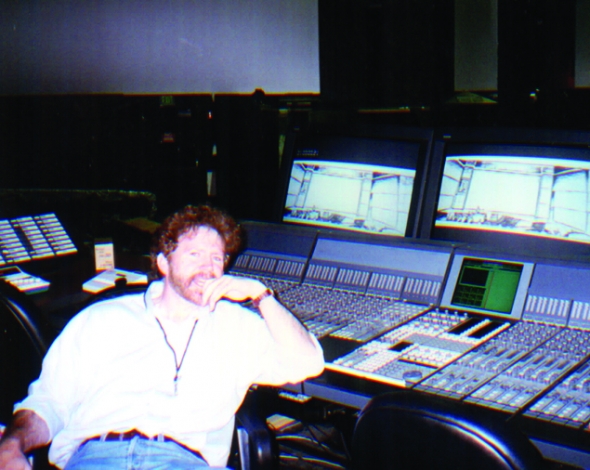 Jay Stein turned to Universal favorite Gary Goddard (later, the mastermind behind Universal’s Modern Marvel: The Amazing Adventures of Spider-Man and the industry-shaping Jurassic Park: The Ride), who’d designed a Conan The Barbarian stunt show for Universal Studios Hollywood. Stein asked Gary if he could develop a new Terminator stunt show to replace his own Conan installation.

In an interview with Flickering Myth, Goddard elaborated: “I watched Terminator 2 and thought, ‘Oh, my God, how am I going to turn this into a live stage show?’ It’s all chases. On trucks, on motorcycles, through hospitals and buildings, and then you’ve got this silver guy. Were we going to have a ten-foot guy in a big metal suit and a look-alike Arnold actor? That would have been awful. My team and I were having a real hard time coming up with ideas. Someone in my team told me that we should just call them back and tell them that this wasn’t going to work, and I told him that you never call them back to tell them that because they’ll go find someone who can do the job. We had to figure it out.” 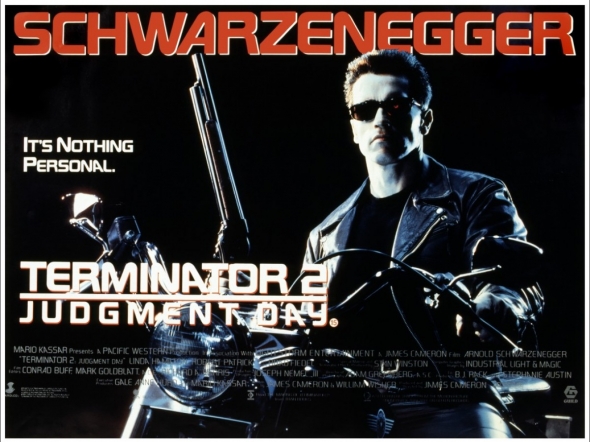 That’s ultimately why Goddard and company did what they’d done in so many projects before and since: raised the bar… he suggested a fusion of a live-action stunt show with a 3-D film and unprecedented in-theater special effects. “I thought, ‘Well, what if we used 3-D?’ We could make it work somehow. Then I thought, ‘Well, we’ve got the 3-D glasses on, what else could we use?’ It was like a magic trick. We would have people going in and out of the screen.”

Initially, James Cameron resisted any attempt to turn his Terminator into a ride. But after more than a year of concept development, Goddard and his team presented the idea to the infamously protective Cameron. According to Goddard, the storied filmmaker looked over the plans and said, “This is actually pretty good. You got the mythology right. You got the story down. I’m impressed. This is really good… Not that I can’t make it a little bit better.” It had to have been a pretty significant relief given that there was no way the creative team could get Arnold Schwarzenegger on-board without James Cameron officially sanctioning the project. 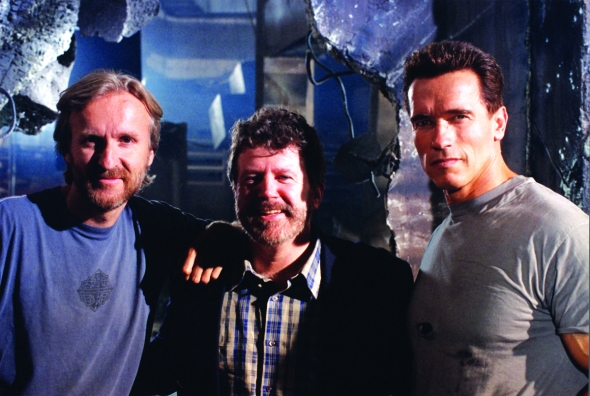 Of course, this is James Cameron, infamous for his Rowling-like eye-for-detail (which, if you believe the rumors, almost derailed the Disney's Animal Kingdom land based on his AVATAR) so he officially came on-board to supervise the project. Under his watch, the new action attraction would be elevated to a canon, in-universe short film continuing the story after Terminator 2: Judgment Day (to eventually connect to the Terminator 3 he was scripting out). Arnold, Eddie Furlong, Linda Hamilton, and Robert Patrick were back on set for what might truly be the most groundbreaking and star-studded theme park attraction to date.

Ultimately, T2 3-D's production cost was reportedly between $36 milion and $60 million, with the film itself accounting for $24 million (or $2 million per minute, beating a Lost Legend: Captain EO's record as the most expensive film per-minute ever). A full-scale mock-up of the proposed theater was constructed in a hangar at the Van Nuys Airport, including a triptych of three silver screens (each 23 by 50 feet), with 60 Iwerks projectors broadcasting the synchronized 70mm film at 30 frames per second. That's also when Gary Goddard and his team had to test out some of the unthinkable effects they'd concoted for this first-of-its-kind live 3-D adventure.

T2 3-D: Battle Across Time officially opened April 27, 1996. What exactly did it have in store? On the next page, we'll journey back in time to 1996 and step into Cyberdyne Systems for a grand product unveiling to find out... The Future Is Waiting...