DisneyQuest: Why Disney's Plans To Bring Its Theme Parks Closer To YOU Crashed and Burned 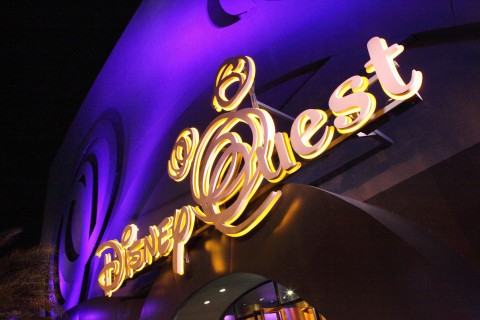 Wouldn’t it be nice to take a break from the ordinary and escape to Disneyland or Walt Disney World? To sail with pirates, face extraterrorestrial alien creatures, and blast baddies with Buzz Lightyear? The fun, the energy, and the enthusiasm around Disney Parks are priceless. But the flight… the rental car… the tickets… let’s just say, they’re anything but priceless.

That’s why, in the mid-1990s, Disney executives began to toy with a radical idea… what if every major city in the United States – no, the world! – could host its own Disney theme park? But forget castles, or dark rides, or roller coasters… This 21st century theme park would be all about you as never before… an indoor, interactive adventure showcasing the newest technologies and Disney’s flashiest storytelling in a compelling, ever-changing family entertainment center.

Here at Theme Park Tourist, our Declassified Disasters series has the unfortunate job of recording the in-depth histories of Disney’s (rare and often radical) failures. We’ve told the full, detailed, can’t-miss tales behind such epic flubs as Superstar Limo, the Rocket Rods, Walt Disney Studios Park, Journey into YOUR Imagination, the despised Stitch’s Great Escape, and so many more.

And today, we turn to a disastrous Disney experience that’s unlike all the others in its scope and scale. DisneyQuest wasn’t just an oversized Disney arcade abandoned and left to rot; it was also a 21st century experiment in mass-producing theme park experiences taken down by time. Today, we’ll check in on this unusual concept from design to destruction and relive the memories – good and bad – produced by this exceptionally odd project. 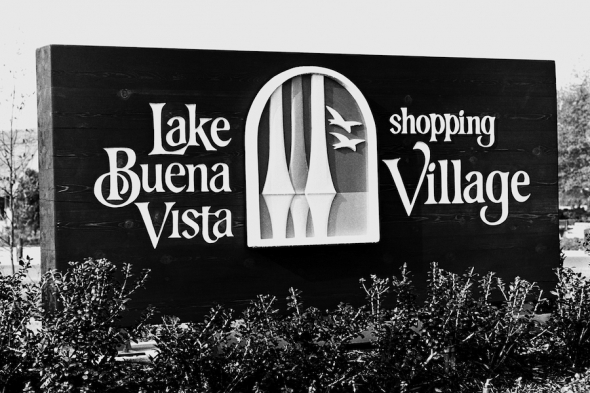 The story begins in the Lake Buena Vista Shopping Village, which opened on March 22, 1975 – just a few years after Walt Disney World itself. While the name might not sound too awfully familiar, the concept should. Lake Buena Vista was a one-stop shop for souvenirs, gifts, and toys during your Walt Disney World visit – a charming lakeside village with shops like the Pottery Chalet, Toys Fantastique, and The Flower Garden.

The concept of the Shopping Village was really intended to act as the main local commerce area for residents of the planned Lake Buena Vista residential area. 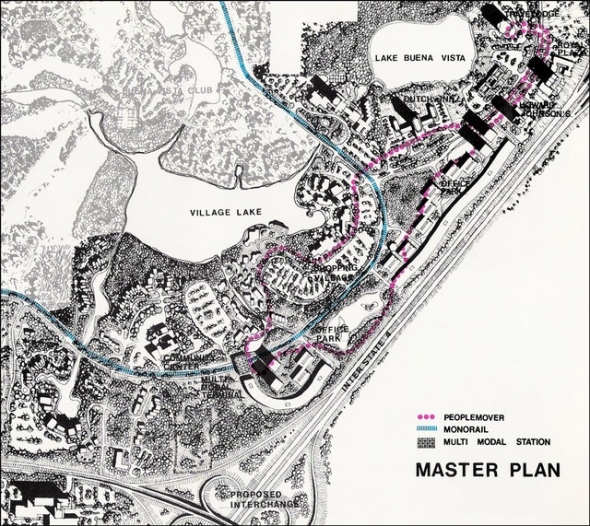 What’s more, Peoplemovers would’ve connected the nearby neighborhood to its commercial Shopping Village, where residents might then board a Monorail and sail off to other Walt Disney World destinations.

While the shopping district opened in 1975, the accompanying residential area (and the mass transit systems that would’ve connected them) were delayed by the announcement of EPCOT Center. Even after the park’s opening, Disney’s finances were exhausted, leaving the Lake Buena Vista residential area undeveloped. Now, Disney had a full-fledged shopping district more or less disconnected from the resort proper. 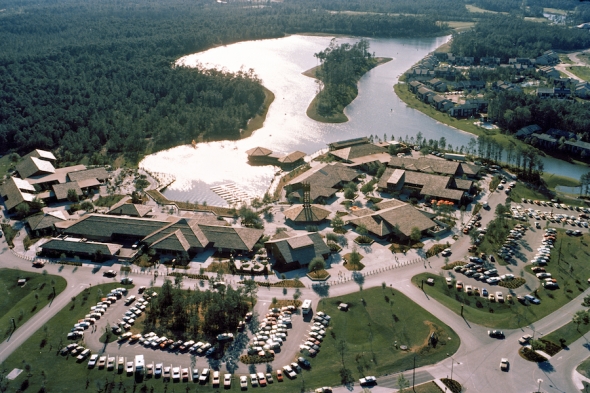 Accessible only by car or bus, Disney gradually experimented with how to convince Walt Disney World guests to make their way to the retail area. For that reason, the Lake Buena Vista Shopping Village was renamed the Walt Disney World Village in 1977.

Fast-forward to the 1980s and new Disney chairman Michael Eisner, who brought with him a very fresh vision for Disney and its theme parks. With a long career in the film industry (most recently, as CEO of Paramount Pictures), Eisner charted a new path forward for Disney and the themed entertainment industry – the "Ride the Movies" era we chronicled in a standalone industry insider feature, BLOCKBUSTER: The Ride. Eisner put his cinematic touch to work in the parks and at the Walt Disney World Village shopping area where he saw a massive opportunity...

In 1986, the existing shopping village was renamed Disney Village Marketplace and soon gained a much trendier neighbor: a modern new concept meant to rival Church Street Station and other “young adult” clubs gaining traction in Orlando.

Pleasure Island opened May 1, 1989 (the same day as the similarly-cinematic Disney-MGM Studios). Layered in the same decadent storytelling and placemaking as the rest of the "Ride the Movies" era, Pleasure Island was packed with nightclubs, bars, comedy clubs, and other adult-oriented – but highly themed – attractions, perhaps best exemplified by the Lost Legend: The Adventurers Club. 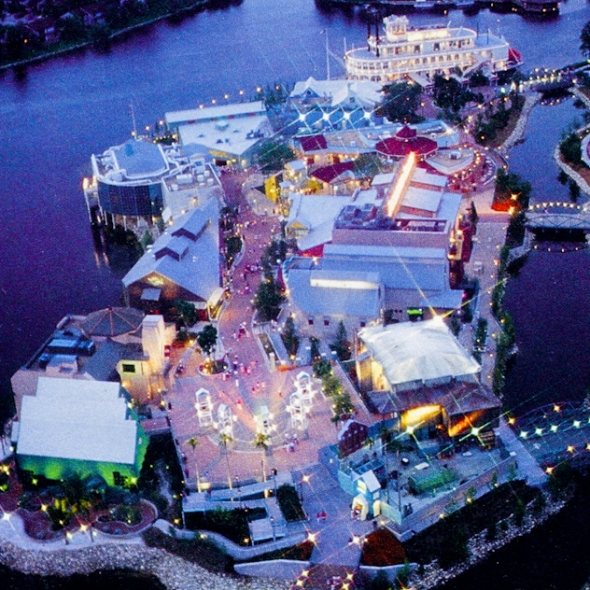 Ah, but here’s where things will start to sound familiar… These two neighboring districts lacked a cohesive or attractive messaging explaining their relationship... until 1995, when the Village Marketplace and Pleasure Island were “combined” to create the newly branded Downtown Disney. The move was a smart one, offering a simplified message, marketing, and connection to the resort… even if a physical connection still wasn’t provided via Monorail or Peoplemover.

As you can imagine, the shifting histories of Walt Disney World’s shopping district could be the subject of a doctoral dissertation, but for our purposes, the story kicks into high gear now…

While the presses were still hot printing Downtown Disney advertisements, Disney announced a third “district” to join the Marketplace and Pleasure Island: Downtown Disney’s West Side would open in 1997. That's where Disney would host its most conceptually ambitious idea since EPCOT Center...

Maybe in some ways, Downtown Disney was the perfect embodiment of Walt Disney World as a whole – dissimilar parts built in different decades, each reflecting the architecture, values, impressions, and purpose of its respective era. Think about it...

The radical new entertainment playground would feature mainstays of the era, like a grungy, rusted warehouse-style House of Blues, a custom-built modern white big top for Cirque du Soleil's La Nouba, a must-visit Virgin Megastore (to purchase a compact disc or cassette for the flight home, no doubt), and a Planet Hollywood restaurant, packed with celebrity memorobilia. Kitschy, comic, and cool, the West Side felt like the perfect '90s interpretation of what a "Downtown" Disney World would feel like – a master-planned expansion that looked, felt, and sounded like the era.

It's also where Disney would test out its most radical concept in a decade.

Housed inside of a towering and mysterious, asymmetrical blue building was DisneyQuest, a brand new kind of themed entertainment experience.

Entirely overseen and operated by a new division of the Walt Disney Company called Disney Regional Entertainment, DisneyQuest was billed as an "indoor, interactive theme park." 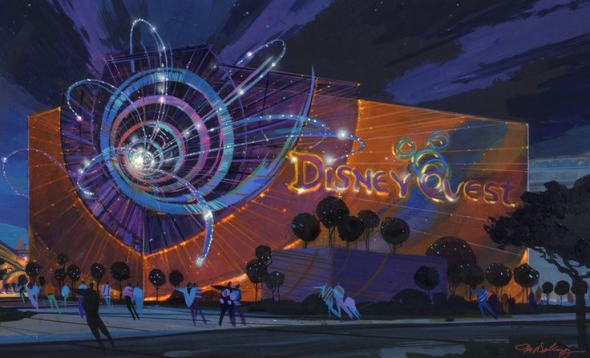 Perhaps you'd agree that that's a vague and unusual way to describe an experience, and that – it would seem – was the point. After all, a generation of '80s and '90s kids grew up gazing in awe at the unusual landmark reigning over Downtown Disney, wondering what could be inside that most unusual building... What's in there? What is DisneyQuest?

Well, that was the question... Almost certainly, DisneyQuest was one of the most peculiar concepts ever dreamed up at Imagineering – and with a powerful reason for being. But this innovative, exceptional concept also stands among our Declassified Disasters for a reason...

Not what, but why? 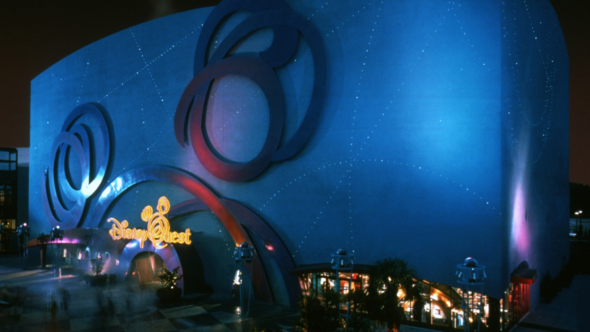 Looming over Downtown Disney's West Side, the unusual blue box of DisneyQuest was indeed a wonder. And when it opened on June 19, 1998, what it contained within was just as surprising. In fact, the contents of that unusual cube were more than just an attraction; they were a prototype of the future of Disney entertainment, with Senior Vice President of New Product Development at Imagineering Joe DiNunzio leading the charge.

“Disney, in its park division, builds these giant things, but it takes a continent or half a continent to support each one,” said Joe Garlington, interactive creative director for DisneyQuest. “And that means if you’re not above a certain level of affluence, you may not be able to see it, or may not be able to see it very frequently — may have to save up for half a lifetime to go to one of the parks if you live in Boise or Chicago or someplace where you’re not near a park.”

But with DisneyQuest – the anchor of a new division called Disney Regional Entertainment – Disney could indeed bring that experience to Boise, or Chicago, or Columbus, or Atlanta, or Indianapolis, or Philadelphia, or New York... The secret? Imagineering's cutting-edge VR Studio. This team of 15 - 25 artists and technicians was all but assigned DisneyQuest with the idea of empowering this regional family attraction with cutting edge – and easily swappable – tech-based attractions.

So to give us an idea of exactly what the experience was like, we're going to step into DisneyQuest as it appeared there in its earliest years. Ready to step inside? We'll take the first steps on the next page...

I visited many times as my kids grew , they loved it and so did I. We will miss it but have great memories of fun and laughter. Ty Disney for the memories

I think a big problem was that it wasn't well known about. Even living in Florida for 6 years after it opened, I didn't hear of it at all. Finally heard about it in 2010, 2 years after moving back to FL. I say the price was well worth it especially with all the arcade games included. I ended up going there just twice, both times in 2016, but wish I had started going earlier. I think the technology was still nice to look at on the major attractions inside, even if it wasn't as impressive anymore. And everything there was worth doing. They could've updated it and advertised it a lot more but decided not to. We'll see if the NBA thing will have its longevity, doubtful since it closed at universal. But with losing this, we have lost the last great arcade and some great attractions

I only got to go to Disney Quest a couple of times near the end but I loved it! I agree it was too pricey, but I wish they could have somehow saved it. I'm not really one to care about graphics so I loved how interactive it was. Especially Pirates of the Caribbean. They had great burgers too. I miss the atmosphere!! I miss Cyberspace Mountain! I miss the classic arcade games! It was worth going to that's for sure. From a business perspective I understand why they closed it. But I wish they didn't.

Nice article, though apparently Pirates of the Caribbean actually replaced a Hercules-themed opening day attraction, it would have been nice to have heard a little about that.

The article also doesn't really cover an issue with DisneyQuest which seems to be common ground for most reviews - upkeep was abysmal, far below Disney's normal standards. In fact I wouldn't be surprised if the shoddy maintenance was a result of a lack of provided budget rather than deliberate oversight.

I'm not big into games--and not very good at them. And a lot of the games there needed more than one person, and I usually go to Disney solo. I went there two or three times, once with my cousin, so I was able to do some of the games I hadn't before. My favorite was Cyberspace Mountain. That was a real ride and not a game. If DisneyQuest had been more about rides and shows, like you find at the theme parks, I could better imagine it doing well in cities across the continent.