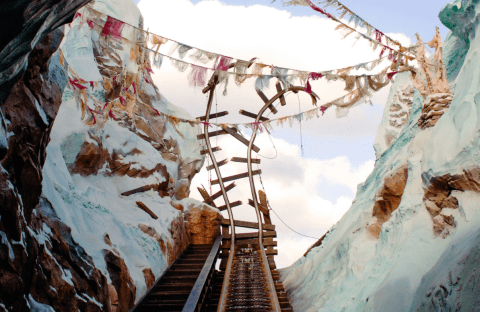 Conflict. For most of us, it’s something we go out of our ways to avoid. Maybe that’s part of why classic attractions from Walt’s time tended to be more atmospheric than aggressive. Back then, guests rocketed through the vastness of space, sailed through exotic jungles, toured through haunted mansions, and soared over Neverland without fear for their own survival - just a few of our favorite rides where nothing goes wrong!

Beginning in the late ‘80s, though, something changed. Emerging technologies yielded the Age of the Simulator – technology capable of changing guests from mere observers to actors – turning Disney and Universal parks into places to “ride the moves!” Not surprisingly, the experiences then began to match the movies in an important cinematic set-up that most of us have lived a hundred times over: “...then something goes horribly wrong.” 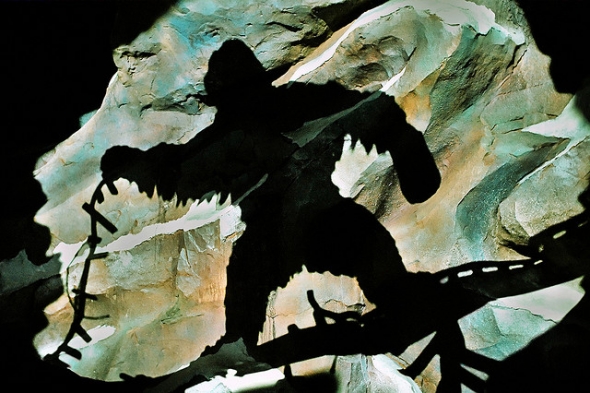 In fact, a visit to Disney and Universal parks today can practically feel like an accident waiting to happen! Ride after ride, first-time guests must brace themselves wondering when something catastrophic will happen, jump-starting the “real” attraction and sending guests on a thrilling race to survive. While enduring “plot twist” after “plot twist” can be an exhausting premise for a day of vacation, we’ve collected some of our favorite “something goes horribly wrong” moments to see just how much fun this simple set-up can be when it’s done right. 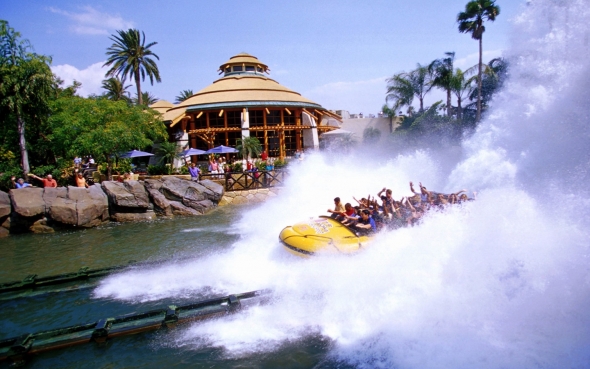 THE SETUP: “Come with us now to a time before man, when giants walked the Earth. Welcome… to Jurassic Park.” As the massive wooden doors swing open and the iconic score bellows, our yellow raft decked out in Jurassic Park decals drifts into the tranquil Ultrasaur Lagoon. Floating beneath the towering beast as it chews on seaweed, it’s easy enough to  believe that Universal’s Islands of Adventure really has recreated the real Jurassic Park, and that the River Adventure is a natural fit among the park’s attractions.

And just like at modern zoos, Jurassic Park engineers have gone to great care to make these animal exhibits appear barrier-free, allowing compsognathus, stegosaurus, and more to get within spitting distance of our tour. Consider it the prehistoric and aquatic equivalent of Kilimanjaro Safaris, where we’re able to mingle with plant-eaters authentically, but safely... 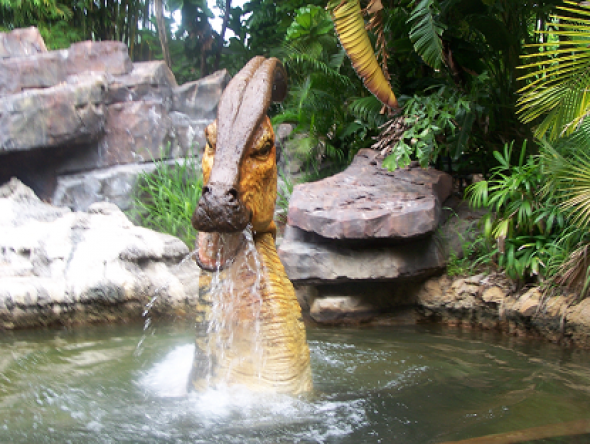 WHAT GOES WRONG: Until we arrive at Hadrosaur Cove, where the playful duck-billed dinosaurs get a little too friendly, swimming under the boat then popping up to play. Just that easily, our rafts are diverted into the backstage area (cleverly revealing all of the real hardware keeping these massive reptiles at bay) where the park’s significantly less friendly dinosaurs reside… and as luck would have it, they’re on the loose.

Ultimately, our only path forward is to be diverted through venom-spitting dilophosauruses into the Environmental Systems building where a particularly angry T. rex is on the rampage, providing one exit: a watery drop down a spillway and back into the placid park below. It’s a brilliant plot twist that really does feel like a “ride gone wrong,” and one that feels entirely plausible in the Jurassic Park we know from the films. 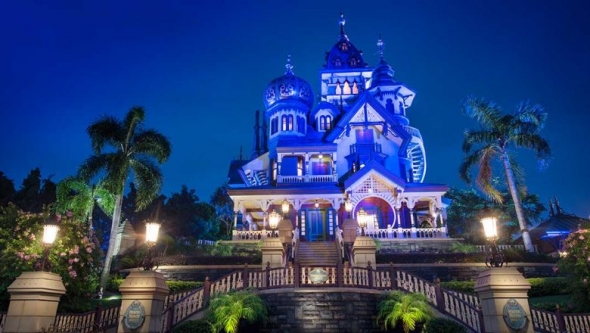 THE SETUP: Eccentric retired adventurer and legendary member of S.E.A., Lord Henry Mystic (with his faithful friend Albert the monkey) has spent his older years in his eclectic home deep in the jungles of Papua New Guinea, the Modern Marvel: Mystic Manor. As luck would have it, the kindly fellow warmly welcomes fellow explorers (like you and I) to tour his international collection of oddities and antiques. And our timing couldn’t be better - their newest acquisition is a must-see: an ancient music box said to grant life to the lifeless. 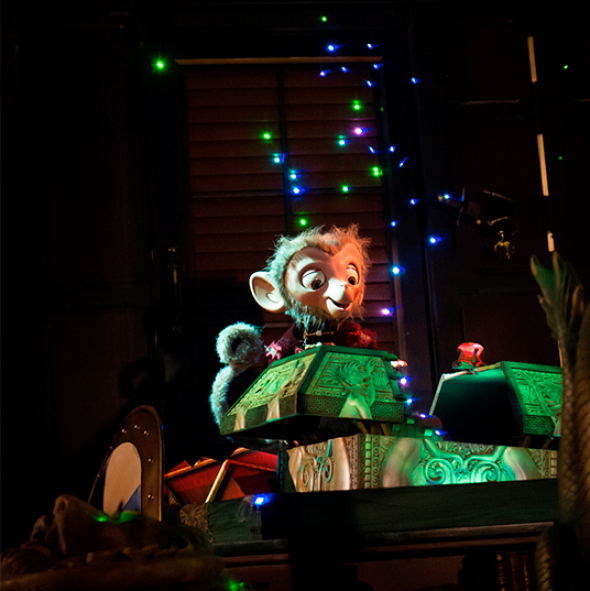 WHAT GOES WRONG: Turns out the shimmering music box is too great a temptation for Albert to bear. Pulling an “Abu,” he inadvertently opens the box, sending its enchanted music spilling out in an impressive special effect. As the haunting notes spread through the home, they awaken Mystic’s collection room-by-room, leaving us lost in the chaos as the home (literally!) tears itself apart.

The simple twist of the adorable (and incredible animatronic) Albert being enchanted by the music box is amazingly fun. Naturally, order is restored when Albert manages to grab the music box at the last moment, restoring peace… and leaving us thankful that our run-of-the-mill tour turned into something much, much stranger. 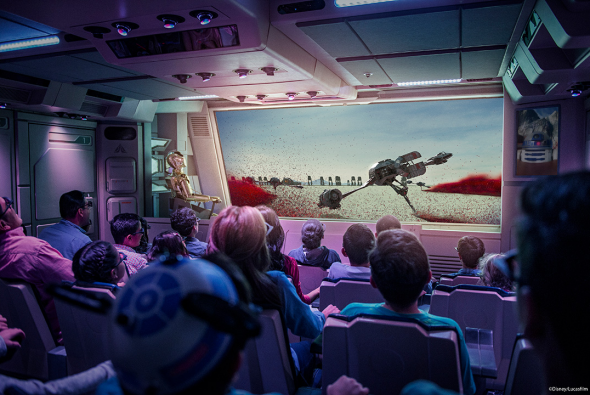 THE SETUP: For decades, guests joining the Lost Legend: STAR TOURS saw what it was like to be part of the Star Wars universe. The answer? Hilariously similar to our own! Though the films depict smugglers and soldiers racing through the cosmos in starships, it turns out that even in the fantastical Star Wars universe, regular folks like you and I travel between planets on budget airlines. Our trip to Endor was, of course, upended by the hilariously inept pilot REX, whose first flight didn’t exactly go as planned… 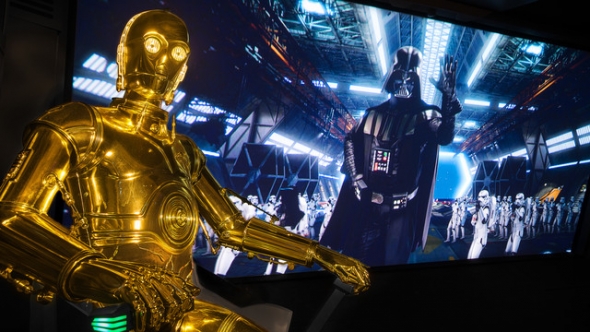 WHAT GOES WRONG: When Disney ret-conned the ride into its own prequel beginning in 2011, the plot changed, too. With C-3PO as our unwitting pilot, guests get caught up in an intergalactic mission when a (randomly-selected) passenger on the flight is revealed to be a rebel spy in disguise. The race is on to return the spy safely, perfectly framing the ride’s randomized, multi-planet journey through the stars and shuffled messages from beloved characters.

Brilliantly, the set-up adds a personal aspect to the attraction. Rather than just being travelers at the mercy of a bad pilot who happen into a galactic confrontation, guests are now recruited into the Rebel Alliance with a mission to deliver their co-traveler in one piece… which also explains why “big name” Star Wars characters from Darth Vader to Princess Leia and Yoda would bother chasing this budget airline through the stars 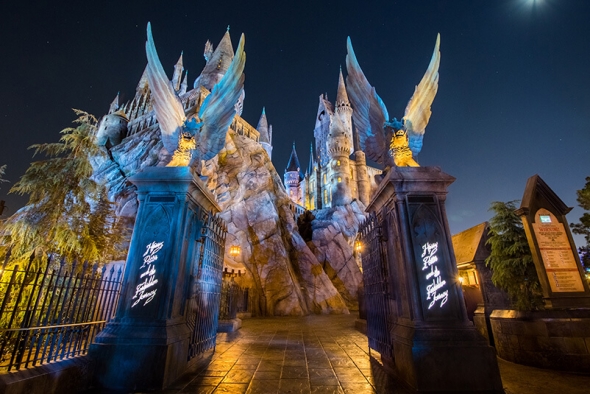 THE SETUP: The legendary School of Witchcraft and Wizardry perched high on a snowy peak over Hogsmeade is perhaps a sight as iconic as Disney’s castle down the street. And surely, whatever awaits within that castle must be world-class. Harry Potter and the Forbidden Journey is indeed a groundbreaking and spectacular dark ride, even if it’s built around a somewhat flimsy premise: that Hogwarts is opening its doors to Muggles (that’s us) where an enchanted bench (a flimsy excuse to disguise the ride system) will tour us through the grounds. With Harry and friends leading the way, surely nothing will go wrong!

WHAT GOES WRONG: What doesn’t go wrong on Harry Potter and the Forbidden Journey? Though the attraction is beloved for being the headlining Harry Potter attraction (look no further than its position inside Hogwarts), it would be somewhat of a stretch to call it “coherent.” Using an inherently-chaotic ride system, the attraction functions as a “best of” montage, (literally) thrusting guests into the face of most every bad guy and magical creature that can fit along the ride’s course.

In a matter of minutes, riders are barbequed by an escaped dragon, spat on by Aragog and his hissing acromantulas, batted about by the Whomping Willow, brought to the Quidditch pitch just as it’s overrun with Dementors, inexplicably crashed into the Chamber of Secrets where the basilisk’s skeleton billows steam, and have their souls nearly sucked out by the Dementors’ kiss. What a day! While Forbidden Journey admittedly lacks a concrete sense of space or plot, it succeeds in capturing just about every iconic place and predicament guests wanted from a Harry Potter ride, and that’s saying something