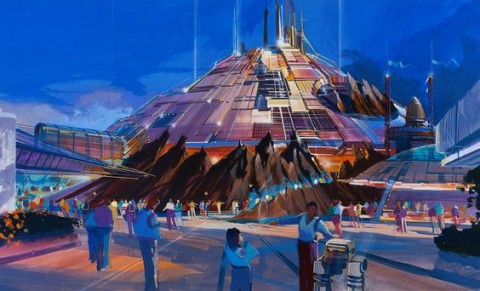 If there's one thing Disney Parks thrillseekers know to look for, it's a mountain peak. After all, since Disneyland's first decade, the connection between Disney and its mountainous thrills has become second nature. In fact, we took an in-depth look at Disney's best "E-Ticket" peaks in their own Countdown: Peaks of Imagineering, summiting the twelve best Disney Parks mountains across the globe and how their headlining thrill rides stack up. What do you think we ranked as the top three "mountain" rides in the world? That special feature is a good place to start if you haven't already...

Because today's look is somewhat different. For years, our Possibilityland series has explored the incredible archives of Imagineering to dive deep into never-built masterpieces that could've been hits... We're talking about the shuttered Muppet Studios once planned for the Disney-MGM Studios, a failed attempt to revitalize Epcot – Project: GEMINI, a gritty New Tomorrowland 2055 once planned for Disneyland, and so many more as part of our In-Depth Collections Library.

And today, in this very special Possibilityland feature, we want to look at ten, never-built, E-Ticket "mountains" proposed for – then cancelled from – Disney Parks around the globe. Check out these cancelled classics and consider: what would your favorite Disney Parks be like today if these towering mountain peaks had risen over the skyline?

After the closure of Magic Kingdom’s most-missed Lost Legend: 20,000 Leagues Under the Sea, Disney designers got to work developing a new E-Ticket for the park. One option they studied was the construction of a so-called “Fire Mountain” to stand as the new headlining attraction in the park’s Adventureland.

The ride would actually have been constructed outside of the park's Railroad, with a long queue snaking alongside the Jungle Cruise (like Disneyland's Indiana Jones Adventure) leading to a steampunk, literary expedition base camp called Vulcania – a version of Disneyland's never-built Possibilityland: Discovery Bay. This new sub-land within Adventureland would likewise be themed to the fantastic, otherworldly stylings of Jules Verne and his antihero, Captain Nemo.

That means that the famously scientific exploits of Captain Nemo and his world would've joined the genres of adventure already present in Adventureland – misty jungles, quirky Polynesia, epic pirates, and now, science fiction and Earth exploration. 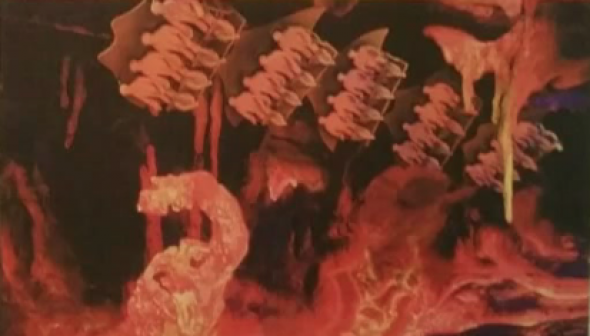 Reportedly, the central roller coaster ride through the peak would’ve been a “flying” coaster, sending guests careening through the molten mountain with lava geysers and magma waterfalls.

Then, in 2001, Disney released Atlantis: The Lost Empire, a big budget blockbuster animated feature that turned Disney’s fairytale formula on its head. Atlantis was a Verne-inspired sci-fi action film that could’ve changed Disney animation forever, and tying Fire Mountain to the tale seemed like a way to get the project green-lit fast. Leaving Jules Verne behind, Vulcania was recast as Whitmore Enterprises Base Camp. 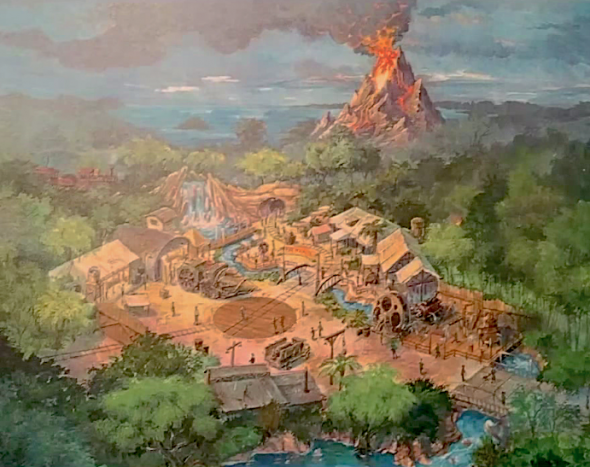 Disney even floated height test balloons (a common first step in construction) to be sure that the mountain wouldn’t be obtrusively visible from elsewhere in the park.

WHAT HAPPENED? Ultimately, Atlantis sunk. The movie failed to make an impression on critics or the box office. Then, the September 11th attacks on New York City quelled the tourism industry, cancelling most projects Disney and Universal were working on at the time.

Recently, rumbling rumors suggest that Fire Mountain is back on Disney’s docket as a potential project, this time tied to the award-winning film Moana… And speaking of which, that height test Disney did to see if the volcano would be visible? It wasn’t from Main Street… but the volcano would practically loom over Disney’s Polynesian Village Resort. Hmm… 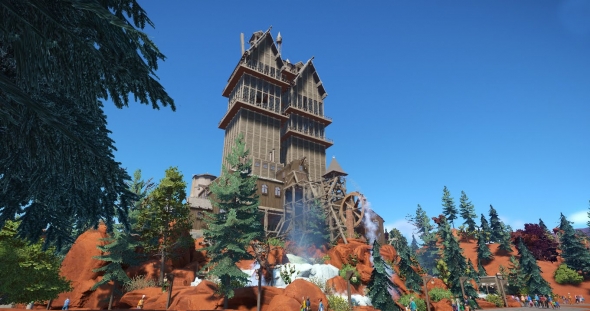 In the 2000s, Disney Imagineers were prepped for everything to change. Disney’s California Adventure Park was poised for a 2001 opening, and executives were sure that the brand-new second gate at the renamed Disneyland Resort would turn the California property into an international destination. Crowds would practically swarm the new, hip, edgy park, desperate to see what Disney had created. In comparison to the modern, cool California Adventure with its “MTV attitude,” old, dusty Disneyland would practically be a graveyard.

That’s why Imagineers set to work developing a new attraction that would help even the odds, bringing people back to the antique 1950s park. Brilliantly, they decided to re-use the technology they’d developed for the Disney-MGM Studios’ headlining thrill ride to create an explosive drop tower inside of a geothermal peak in the park’s Frontierland. 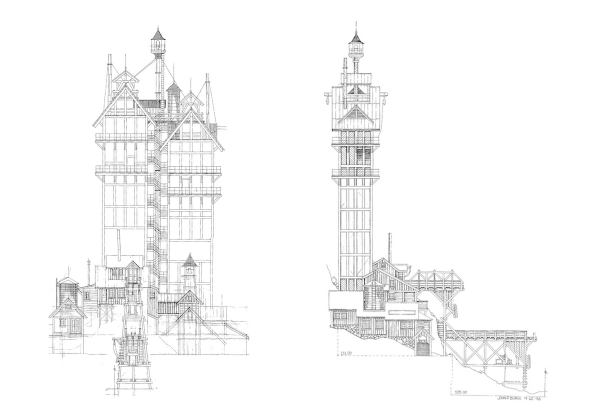 WHAT HAPPENED? Of course, things didn’t quite work out as expected… In our in-depth Disaster Files: Disney California Adventure feature, we dissected the unfortunate fate of Disney’s costliest mistake ever, but to make a very long story short, people were not flocking to Disney’s new park. Contrary to what executives expected, it was the brand new California Adventure that needed the boost! Better yet, there was no need to reinvent the wheel with an ambitious original project like Geyser Mountain... the already-tried-and-true Hollywood Tower Hotel from the Disney-MGM Studios would be a perfect fit for the Californian park!

After the September 11, 2001 terrorist attacks on New York, however, tourism came to a halt and Disney slashed budgets and cut projects across the parks division. California Adventure still needed a boost badly, but now the Tower of Terror it recieved would need to be a new, budget-friendly version – a story we told in-depth in one of the site's most popular features, Lost Legends: The Twilight Zone Tower of Terror. 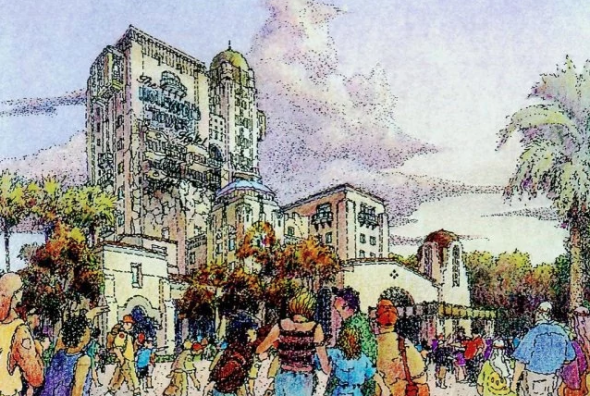 Disney still planned to bring Geyser Mountain to life at Disneyland Paris, where it would take the form of a giant drilling rig, but then the French resort’s second park needed an even bigger boost than California Adventure did! Thus, the less-expensive Californian version of The Twilight Zone Tower of Terror was duplicated in Paris’ abysmal second gate – another Disaster File: Walt Disney Studios Park – meaning Geyser Mountain never saw the light of day. 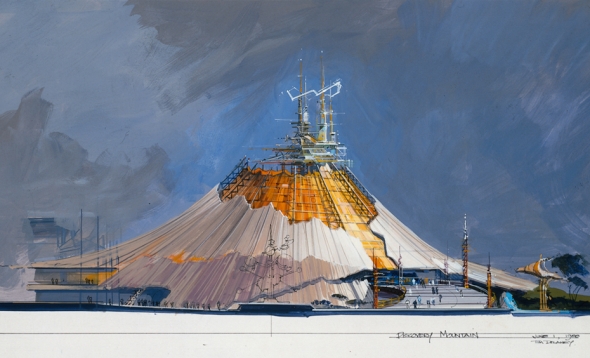 When Disney’s Imagineers started work on EuroDisneyland, they knew that they faced an uphill battle to legitimize the Parisian park. The French media turned against the “American imperialism” of a Disney property in Paris early on, leaving designers in the unusual position of having to downplay the Americana inherent in Disneyland... which, at its core, is an icon of American enterprise whose themed lands are essentially time capsules of American pop culture, heritage, and pride.

The most profound switch was that Disneyland Paris didn’t have a Tomorrowland at all, since Europeans would find little interest in the sleek, geometric, white, concrete land of NASA, circling rockets, and the optimism of the Space Race. Instead, the land was reborn as Discoveryland, based on plans for a never-built expansion of Disneyland California – the Possibilityland: Discovery Bay. 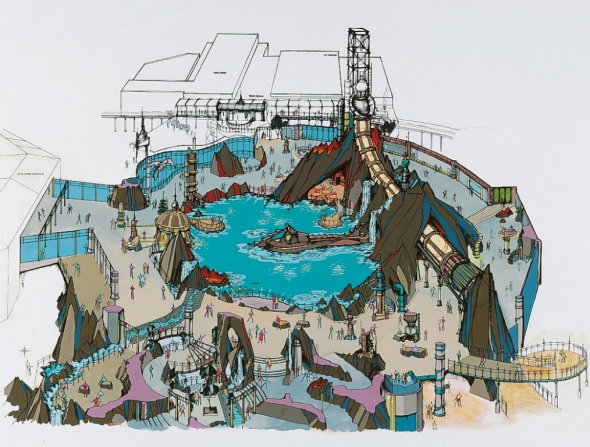 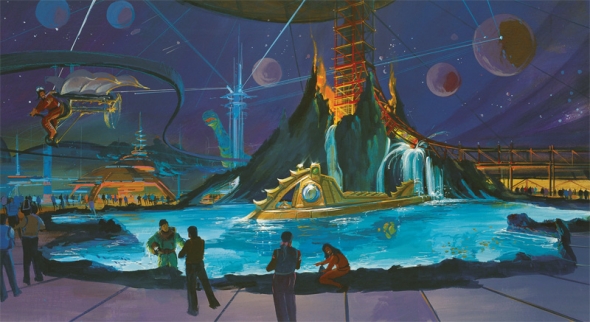 ...like a first generation free-fall drop ride based on Journey to the Center of the Earth, a walk-through tour of the Nautilus from 20,000 Leagues Under the Sea, and a custom-built roller coaster through the stars themed to From the Earth to the Moon.

WHAT HAPPENED? Ultimately, the overbuilt Disneyland Paris fell into a financial freefall. Its budget was so bad, it infamously made then-CEO Michael Eisner wary of any large scale projects to follow. That’s why – in Paris’ wake – dozens of projects were cancelled or closed. Though Imagineers had intentionally left Discovery Mountain out so that they could build it when the park needed a re-awakening of public interest, Disneyland Paris needed something new now. 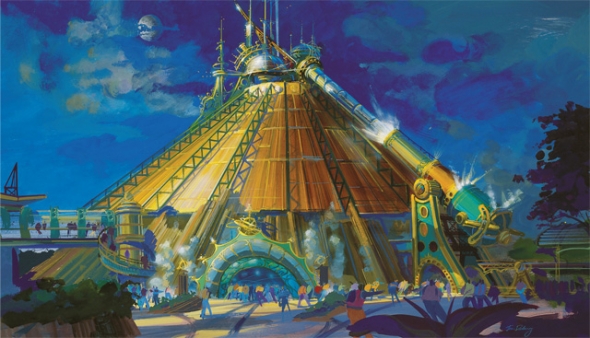 Discovery Mountain was “downgraded” to the scale of a typical Space Mountain, but retained the beautiful, Jules Verne inspired exterior and story, becoming a Lost Legend: Space Mountain – De la Terre à la Lune, which eventually fell to the same scientific styling as the other Space Mountains (and even a current and seemingly-permanent Star Wars overlay), just in a much more elaborate shell.