The 10 Most Incredible PROJECTION MAPPED Effects in Disney Parks (With Videos to Prove It!) 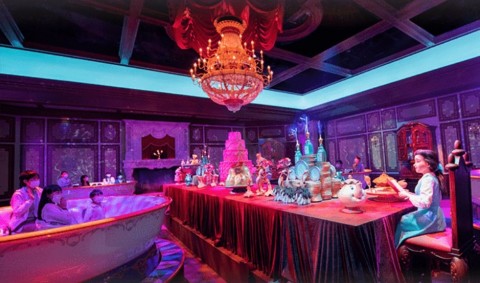 For more than sixty years, Disney's designers have been assembling an industry-leading toolbox of storytelling tricks. From Audio Animatronics to cutting edge ride systems, Disney doesn't just lead the industry... sometimes, it is the industry. But in the last few decades, fans have seen one particular tool rise to the forefront in Disney Parks: projection mapping.

While we certainly could make a list of the most incredible scene-based effects in Disney Parks, projection mapping is not just "screens!" In fact, it's quite a lot more. When Imagineers use projection mapping techniques and technologies, they create media to project onto physical sets and built or natural environments. In that way, projection mapping isn't about merely projecting media, but about using projected media to expand, deepen, enrich, or enhance a world.

To that end, our list will be packed with in-ride moments where projection mapping adds life, energy, and "magic" to Disney Parks rides! Sometimes subtle, sometimes explosive, projection mapping is a major tool in Imagineers' toolbox today, and with each subsequent use, designers seem to refine its roles. These are just some of our favorites... where else have you seen projection mapping enhance your favorite Disney attractions?

Be warned! Projection-based moments that serve as jaw-dropping finales, showstopping scenes, and epic encounters are on this list, so if you'd rather avoid spoilers for rides (up to and including Disney's newest), you may have to skip an entry or two!

10. The Wonders of Wonderland

To celebrate Disneyland's "Diamond" 60th Anniversary in 2015, Imagineers decided to add a little shine to many of the park's most classic attractions. Arguably, none got as much shimmer as Alice in Wonderland, the whimsical and wacky Fantasyland dark ride. It's not just that designers spruced up the ride's trippy, day-glo journey winding through the forests of Wonderland; they also employed the burgeoning craft of projection.

Technically, Alice's projection-based upgrade came after very, very early prototyping of the technology's possibilites in Snow White's Scary Adventures, and before the anticipated (and significantly more subtle) upgrades in Peter Pan's Flight. But Alice's strikes the perfect balance. The additions there are staggeringly beautiful, incredibly vibrant, and literally blend so perfectly with the super-saturated world of Wonderland, you'll definitely find yourself surprised by what turns out to be static and what moves.

The before and after video above isn't just a great representation of the incredible work Imagineers accomplished with this integration; it's a great example to kick off our list. Projections can be used subtly, our in-your-face; they can be solo, or integrated into physical sets; they can add kinetics, or enhance static sets; they can "plus" a favorite moment, or be stars in their own right. Alice in Wonderland demonstrates it all.

Big Thunder Mountain may not have been an original attraction at Disneyland or Magic Kingdom, but over the last forty years, it’s become so beloved that it might as well be! The attraction is deeply integrated into the parks in Anaheim, Orlando, and Paris, including its pivotal role in three legendary projects: Discovery Bay, the Western River Expedition, and Phantom Manor, respectively.

In 2014, Disneyland’s mountain reopened after a massive 14-month refurbishment that saw the track entirely rebuilt. Among its reinventions was transforming the ride’s third and final lift hill (previously filled with ‘earthquake’ rumbling rock pieces) into a new “explosive” finale. As the train enters the final tunnel, a knocked over lantern lights a strung-up fuses, which race up the lifthill alongside riders.

The fuse strikes bundles on dynamite tucked up in either side of the tunnel, bursting out clouds of fog... with projection-mapped explosions atop! If you can believe it, Disney initially had an even grander plan, with a massive motherlode of dynamite atop the lift hill serving as its finale, launching an 'it's tough to be a bug'-sized load of fog to instantly fill the tunnel. Eventually, that proved a bit too unreliable given trains enter the tunnel every 20 seconds or so... however, the projection meant for that massive explosion remains, still coating the tunnel in sparks and flame in a grand and heartstopping surprise!

The "explosive" finale has since made its way to Disneyland Paris. Strangely, even though it's been rumored to make its way to Magic Kingdom just about every year since 2014, Florida's ride still hasn't made the upgrade... one of our 16 Disneyland Exclusives That Should Make Disney World Fans Jealous. (Don't worry, we have the opposite list, too.)

When Tokyo Disneyland opened in 1983, its Jungle Cruise closely resembled Magic Kingdom’s, including a copy of the lost Cambodian temple that originated with the Floridian version. In 2015, Tokyo’s version, however, got a facelift. There, the ride was rechristened Jungle Cruise: Wildlife Expeditions, gaining a synchronized on-ride audio score, new special effects, and a nighttime lighting package that makes the ride an absolute must-see after dark.

In a new mythology, the ride was reimagined to include three ancient animal spirits called upon by guests along their journey – the tiger for courage, the elephant for strength, and the monkey for cleverness. When Skippers call upon the ancient amulet of the elephant to guide the boats through the Cambodian ruins, the temple’s carvings spring to life as a mystical power sweeps along the walls, igniting ancient flames, sweeping away gnarled roots, and spreading color and light throughout the chamber.

The “magical” moment may seem at odds with the otherwise humorous ride, but it’s a clever way to add new life (literally) to a classic scene. What’s strangest of all is that – yet again– the upgrade has not yet come to Magic Kingdom’s nearly identical ride.

A similar effect is used in Shanghai Disneyland’s Voyage to the Crystal Grotto (a sort of fusion of the Jungle Cruise, World of Color, and a Fantasyland parade), bringing to life the ride’s eponymous spring-fed grotto from which fairytale stories flow. And speaking of colorful, musical, animated experiences, our next projection-mapped scene brings to life one of the greatest Disney songs of all time by way of the newest E-Ticket Disney dark ride on Earth... and it's not at Disneyland or Disney World...

I hate to be "that guy", but there's a typo in the first paragraph:
"For more than six years, Disney's designers have been assembling an industry-leading toolbox of storytelling tricks. "
Wow, a whole 6 years? That's amazing. ;)

I think that should read:
"For more than SIXTY years, Disney's designers have been assembling an industry-leading toolbox of storytelling tricks.

Thanks for the heads up, apologies the typo has been corrected! Thanks for reading TPT.