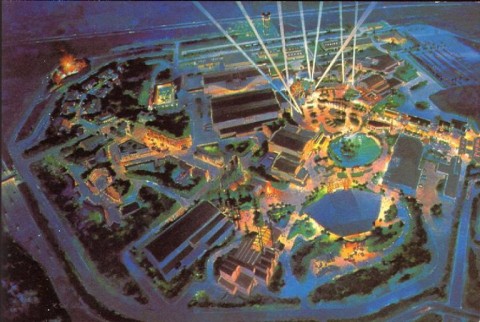 Possibilityland. If you’ve been with us long enough, you may have traveled with us to this spectacular place where never-built attractions are alive once more. In fact, our Possibilityland series is packed with in-depth tales of never-built rides from around the globe. But once in a while, our trips to Possibilityland take a detour. From time to time, we like to step back and walkthrough entire parks as they could’ve been if one person said “yes” instead of “no.”

So far, our “What If?” Walkthroughs have taken us through the Magic Kingdom that almost was; an alternate reality Future World with its cancelled pavilions restored; and an epic journey through Disneyland’s could-be-classics. And today, our trip through Possibilityland brings us to the Pan-Pacific Gates of a park you may hardly recognize… Welcome to the Disney-MGM Studios that never was.

When the Disney-MGM Studios opened in 1989, it represented an early look into the mindset of the still-new CEO Michael Eisner and President Frank Wells. Born and bred in the world of filmmaking, Eisner and Wells (hailing from Paramount and Warner Bros., respectively) were brought into Walt Disney Productions in the early ’80s as a “Hail Mary” attempt to save the company. Without their uniquely-cinematic leadership, it’s likely that Disney would’ve been sold for parts with its assets and brands scattered to the winds.

Instead, the duo jump-started Disney animation, revitalized their live action division, created the more mature Touchstone Pictures banner to diversify the studios’ products, and began acquiring IP and media companies that would eventually build into the Walt Disney Company we know today.

The Disney-MGM Studios was Eisner’s love-letter to the movies; a celebration of the romance and magic of Tinseltown; a distinctly-’80s/’90s opportunity to see “behind the scenes” at “how the magic was made;” to "Ride the Movies"! Only at this new kind of theme park (a “studio”) could designers do away with tried-and-true rules of Disney Parks and instead mash together the hottest characters of today; to dispense with themed lands and instead house rides in barren backlots and beige soundstages! Yes, the Disney-MGM Studios was an oddity… which makes it particularly interesting to visit its “alternate reality” form here in Possibility World, where its never-built attractions weren’t never-built after all..

While Disney’s Hollywood Studios opened with just two rides and has grown and shrunk in fits and starts since then, here in Disney’s Possibility Studios, anything is possible… So let’s tour the could-be classics of this alternate-reality park to see what might’ve been… 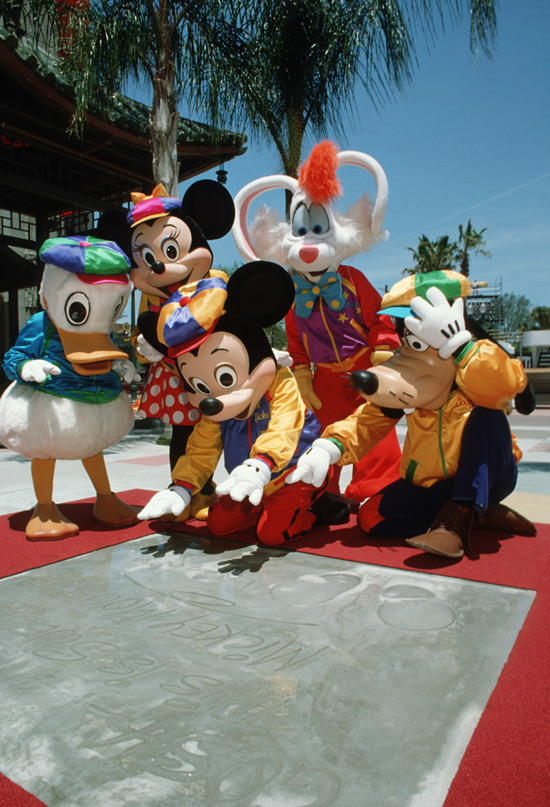 Though Disney may not have been churning out hits yet in the late-80s, that doesn’t mean they didn’t have any viable, fresh, hot properties to bring to their studio park. Even if 1989’s The Little Mermaid is commonly celebrated as the start of the “Disney Renaissance,” there’s arguably another movie whose premiere a year earlier had started to turn the ship… 1988’s Who Framed Roger Rabbit was released through Touchstone Pictures (created by Eisner to diversify Disney’s offerings with more mature content), but the Academy Award-winning film was a Disney milestone nonetheless.

In fact, Roger Rabbit was envisioned as a de facto mascot of the Disney-MGM Studios! That’s why he was elevated to “fab five” level at the park’s 1989 opening! The exit of the Backstage Studio Tour even dropped guests off in a Toontown warehouse to explore props from the film. But here at The Disney-Possibility Studios, in the early ’90s Maroon Studios finally came fully to life! Built in a backlot right off of the then-new Sunset Blvd., this haywire 1940s film campus of cartoon stars would be where animated characters “clocked in” and got to work in the sometimes-seedy business of making the cartoons we love.

Nestled into the cartoon hills is the TOON COASTER, a mile-a-minute family coaster based on the 1990 “Roller Coaster Rabbit” short (wherein Roger “babysits” Herman… and loses him aboard the Florida State Fair’s towering scream machine) . Zipping to-and-fro, this wild ride darts in and out of the “terror tunnel,” zips down the “Giant Slalom,” crashes through setpieces, and more!

Meanwhile, BABY HERMAN’S RUNAWAY BABY BUGGY RIDE might be imagined as a modern take on Mr. Toad’s Wild Ride. Queueing guests would reportedly pass by Baby Herman’s trailer, only to hear the grizzle-voice star insisting some no-good extras be rounded up for the dangerous stunts needed to film the 1990 “Tummy Trouble” short.

Guests would be loaded into zippy baby strollers and set loose in the short’s Toontown Hospital, zooming through the sets, rumbling down stairs, crashing through doors and bouncing over patient beds. And in total “Hollywood” standard, on-ride image capture would give guests the chance to take home a souvenir of their wild stunt-stroller drive… with baby bonnets placed on their head.

Still, the land’s true centerpiece has to be TOONTOWN TROLLEY. An evolution of the Rediffusion ATLAS simulator tech already in use aboard the Lost Legend: STAR TOURS, this attraction sends guests into the Toon world as never before. Riders take a seat inside of Gus the Bus, a municipal Toontown transit bus with dreams of making it big, tired of his same-old route through the city. And luckily, when Benny the Cab pulls up to let him know of auditions today, Gus heads off on a short-cut trip to the studios with guests in tow!

The first surround-screen simulator, this incredible attraction gives guests the chance to see not just where they’re going, but where they’ve been. Along the way, they end up swallowed by Monstro, crash landing from skyscrapers, and saving Jessica Rabbit from a burning fireworks factory. What a thrill!

If you’re counting, that means that Roger Rabbit’s Hollywood contains three substantial attractions, which are sorely needed in a park that opened with only two rides to begin with! Paired with the rest of Sunset Blvd., this early-’90s expansion gave the Disney-MGM Studios a new, fresh, exciting lease on life; a cool, hip park filled with the stars of today, plucked fresh from the multiplex! Speaking of which…

Since 1931, the tough-talking Chicago detective Dick Tracy had been a staple of the weekly comic strips. Even still, Tracy changed with the times. In the 1940s, he gained a walkee-talkee watch; in the ’50s, he faced off with a fictionalized Al Capone; in the ’60s, he briefly switched to solving crimes on the moon; by the ’70s, he was back on Earth, and with a hippie sidekick to boot. The cool, hard-nosed private eye and detective had faced his share of baddies and been spun off into radio operas, full comic books, novels, and feature films.

But Disney’s 1990 adaptation would be the biggest yet. Directed by and starring the legendary Warren Beatty with Al Pacino and Madonna, as well as an all-star ensemble cast of star-studded cameos. Disney reportedly imagined Dick Tracy as a heroic action blockbuster that would rival Warner Bros. 1989 film Batman and its $400 million box office haul and fuel a long-running film franchise.

Okay, so, technically, the film wasn’t the franchise-fire-starter Disney hoped. Disney prepped for a $60 million write-off on the film after its domestic run with then-Studio chairman Jeffrey Katzenburg commenting, “We made demands on our time, talent and treasure that, upon reflection, may not have been worth it.”

Earning less than half of the equally-expensive Who Framed Roger Rabbit had made two years prior, Dick Tracy was quickly written off as a dud. Luckily, rather than abandoning the IP, Disney Imagineers figured out how to put it to good use. You don’t have to know much about Dick Tracy to enjoy DICK TRACY’S CRIME-STOPPERS. This revolutionary ride was the first to use Disney’s groundbreaking EMV (Enhanced Motion Vehicle) technology.

On board, guests find themselves in the seedy underbelly of Chicago in the 1930s, careening though the city’s streets, warehouses, and wharfs hot on the tail of gangsters. If you can believe it, this tour through the mean streets of the 1930s also equips guests with their own in-vehicle tommy guns to take on gangsters, trigger special effects, explode cars, pop the lids off of trash cans, and more.

As you can see, Disney’s Possibility Studios isn’t afraid to tackle the blockbusters of the day. This is a different kind of Disney Park. It’s cool. It’s fresh. It’s edgy. It’s cinematic. And that goes double for the ride waiting at the end of Sunset Blvd… Let’s hop back on the Red Car Trolley and take it to the street’s end, where a haunted old hotel looms. Nope, not that one… Read on…