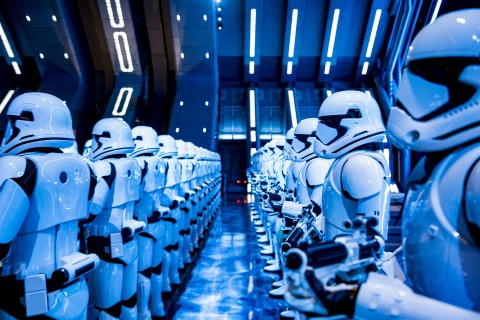 There has been a disturbance in the Force…

The opening of Star Wars: Rise of the Resistance at Disney’s Hollywood Studios and Disneyland had unprecedented effects on Disney parks. Along with basically single-handedly saving Star Wars: Galaxy’s Edge after a rocky start, the ride also dramatically shifted crowd trends at Walt Disney World. It’s an attraction unlike anything Disney has ever tried before, an 18 minute immersive experience where guests become recruits in a crucial battle between the First Order and The Resistance. Across the board, visitors agree the ride is outstanding, and that has drawn the unprecedented crowds originally expected to accompany Star Wars: Galaxy’s Edge.

To manage the demand surrounding the Galaxy’s Edge opening, Disney introduced a new technology when the land opened at Disneyland and Walt Disney World: virtual queues. While virtual queue tech isn’t entirely new (Universal Orlando Resort utilizes it at Volcano Bay), Disney’s use of it was a little different, assigning guests “Boarding Groups” that would be granted entry to the land in phases. While this definitely helped on both opening days, the system was shelved thanks to just how well Star Wars: Galaxy’s Edge handled crowds.

The virtual queue made a comeback with the arrival of Star Wars: Rise of the Resistance, the land’s second attraction. Demand for this ambitious ride has been insane, especially at Disney’s Hollywood Studios. The attraction’s virtual queue has become a hotly-debated source of controversy, especially as Disney has juggled policy changes to try to find the most effective system possible to get the most guests onto the attraction while planning for frequent breakdowns.

Recent guest surveys suggest that the company is definitely considering utilizing the system again for future ride openings—is this a good idea though? With all the mixed press, did Disney really make the right call utilizing a virtual queue instead of a stand-by line for Star Wars: Rise of the Resistance? We decided to take a look at the major pros and cons to determine if Disney’s new virtual queues are an industry game changer or a complete flop…

Standing in line is the worst. It’s a running joke that most of what people do visiting theme parks is stand in line. The situation is even more brutal at Universal Orlando Resort where guests can’t bring smartphones into many thrill ride queues. Guests who are shrewd with their time will go to incredible lengths to avoid lines or at least reduce their sting during any park visit.

While somewhat long queues are a hallmark of many E-Ticket attractions, brand new rides traditionally tend to draw the fiercest crowds—to the point that a park visitor can lose an entire day standing in line for just one ride. Our editor shared her experience enduring a fourteen hour line at Universal’s Islands of Adventure to ride Hagrid’s Magical Creatures Motorbike Adventure, a rather hellish undertaking despite having absolutely loved the ride. Weather delays and breakdowns caused the queue to swell to absurd proportions, but theme park visitors are so used to correlating long lines with success that Universal just let it be. When the opening of Star Wars: Galaxy’s Edge didn’t produce the same scenario, people called the land a failure in comparison. Disney Parks chairman, Bob Chapek, countered that, “Ten hour lines are not a sign of success.” He went on to even suggest that such a scene was a sign of failure.

One of the things that surprised us the most about Star Wars: Galaxy’s Edge was how well the land handled extreme crowds—the entire land is a labyrinth of crowd sponges including attraction queues, dining opportunities, and shops that pull guests out of the streets. Virtual queues may have proven unnecessary for the land, but they had a major impact for guests trying to ride Star Wars: Rise of the Resistance.

This ride is proving to be Disney’s most popular attraction to date, and it has drawn crowds that could easily form 12-15 hour lines without even hitting rope drop. If you happened to be an unlucky soul who ended up in the back of such a crowd, you would basically be paying a full park admission just to stand in line for Rise of the Resistance all day. If the ride utilized standby lines, it’s conceivable the rest of the park would be quite empty, and while that would be great for guests avoiding the new ride, that’s a pretty lame way to spend a quite-expensive Disney day for those in line. With some rare exceptions, the virtual queue completely eliminates the danger of losing a half day or full day to one attraction wait, which leads us into our next pro-point…

This is the real game changer, and it doesn’t just affect Star Wars: Rise of the Resistance.

In a stand-by queue, guests can only do one thing: wait in that queue. No matter how much interactive elements Disney might add to keep guests entertained, a queue keeps guests in one place for the duration of that wait. While lines do act as crowd sponges to keep thoroughfares from getting over-filled, some attractions just consistently draw long waits (at the time of this writing, Avatar: Flight of Passage has a 150 minute wait on a Wednesday in the off-season—three years after opening!). A large portion of your day is quickly vampired away just by waiting in queues.

While Disney’s new virtual queues don’t completely solve the problem of lines, they do make a substantial difference for E-ticket attractions like Star Wars: Rise of the Resistance. The virtual queue takes the sting out of mega-lines by ensuring that your wait for the attraction becomes an opportunity for you to explore the rest of the park. Overall guest satisfaction is improved because guests really feel like they got to experience more than just a queue and a single ride (even if that ride is as excellent as SW: ROTR). As an added benefit for Disney, this extra time exposes guests to more shops and dining venues, meaning more revenue for the company overall. It’s a win-win situation.

It’s not a win-win situation without flaws, however…

We used the virtual queue for ROTR at Disneyland and I thought it was fabulous. I would honestly like to see virtual queues replace Fastpass. It left us free to do other things and once our group was called we waiting about 20 minutes.