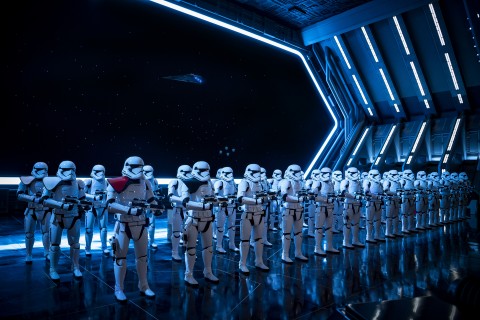 “This will begin to make things right…”

Star Wars: Rise of the Resistance is undoubtedly Disney’s most ambitious attraction to date, and its opening has had unprecedented effect at Walt Disney World. After a challenging start for Star Wars: Galaxy’s Edge due to lower-than-expected attendance and negative press, the company’s fortunes changed overnight with the opening of the most technologically complex ride in Disney history. Star Wars: Rise of the Resistance has successfully broken barriers and drew record-breaking crowds at Disney’s Hollywood Studios multiple weeks after opening day. The demand has been so high that Disney was forced to adapt ever-changing opening policies and plant Guest Experience teams throughout the parks to mitigate backlash as they figure things out.

It cannot be understated how groundbreaking Star Wars: Rise of the Resistance is— this is a ride well-worth the effort it takes to get up early and get a boarding pass (conveniently with the My Disney Experience app). It’s a masterpiece of technology and immersive storytelling with universal appeal, and it’s also something of a love letter for Star Wars fans with tie-ins to both the original films and the new trilogy.

Star Wars: Rise of the Resistance is the missing piece Star Wars: Galaxy’s Edge needed to truly feel whole, and there are some very specific reasons why its arrival will prove an absolute game changer both for Disney parks and its resident land…

1. It has overcome the biggest problem with new attraction openings

The most significant controversy surrounding Star Wars: Rise of the Resistance has come from ever-changing policies surrounding its virtual queue—the only way to get onto the ride as of this writing. Demand for the ride has been so great since opening day that guests were arriving as early as 4am to score a coveted boarding pass, a system that favored whoever could get to the parks first since you could get a boarding pass as soon as you were scanned into the park gates. The crowds were so massive, Disney kept having to open the park early (as we saw on Star Wars: Galaxy’s Edge opening day at DHS) both for safety reasons and to try to boost the ride’s capacity which had proven lower than they expected due to frequent breakdowns. Unfortunately, the first-come, first-serve boarding pass race also meant lots of unhappy guests just couldn’t get to the parks early enough to get a pass, even if they arrived well before frequently-shifting opening times.

My husband and I struck out twice trying to get onto Star Wars: Rise of the Resistance, and we definitely experienced some of the intense anticipation and disappointment among guests trying to get onto this ride. On opening day, unforeseen circumstances kept us from being able to get into Orlando before the ride hit capacity. A week later, we arrived well before the park’s published opening on My Disney Experience only to find out that the official opening was moved an hour earlier, and the gates opened even earlier than that—the ride hit capacity minutes before we got into the park. Lines of visitors at Guest Relations were unhappy about the moving-target opening times, and we were among those who received free park hoppers to use on a normally-blacked-out-day after a friendly chat with the Guest Experience Team (seriously, that team is doing an outstanding job).

Changes to the boarding policy worked out in our favor and others who struggled to get to the park early enough. Disney finally decided that even if guests were let into the park early for safety reasons, you couldn’t get a boarding pass until the official opening time. While I was skeptical of My Disney Experience being able to handle the demand of thousands of guests wanting boarding passes at the same time, this system worked out just fine and actually made things a bit more fair—everyone who arrives early enough to get through the gate before official opening has a fair shot (we arrived at a bit after 6:15 and got into the park at 6:56—phew!). This also lines up with the standard for most new attraction openings where guests have a reasonable expectation to arrive before rope drop to try a new attraction, but that they don’t necessarily have to be there multiple hours before. The crowd seemed substantially more chill than we’d seen previously since people no longer felt the need to frantically reach the gate first. It worked, and to our astonishment, we ended up in boarding group 6. By the time we made the walk from the entrance to Star Wars: Galaxy’s Edge, our group was up. We did have a hiccup with my boarding pass disappearing, but fortunately, I had taken a screenshot of it, and a Guest Experience Representative got us through. Screenshot your pass!

The virtual queue for Star Wars: Rise of the Resistance has definitely caused some controversy, but in the end, the system is revolutionary. It completely removes the most unpleasant part of visiting a popular new attraction: standing in ridiculously long lines. Our own editor experienced what it’s like to stand in a 14 hour line for the opening of Hagrid’s Magical Creatures Motorbike Adventure , and though the ride was great, the line was a miserable experience. For Disney, they don’t want guests miserable in long lines: they want guests having a good time in the parks while spending money on dining and shopping.

Once you have a boarding pass, even if you do have to wait ten hours to get on the ride, you can spend that time enjoying the rest of the park, riding rides, dining, or even returning to your resort for a nap. It’s a win-win for Disney and guests. The biggest problem with it was the moving opening times (which they have solved) and fixing the ride’s capacity problems. The ride is working at higher capacity now, and they even added a system where guests can jump into a backup boarding group that isn’t guaranteed a spot on the ride but still has a fair shot (these groups have successfully been used, by the way).

The applications for virtual queue technology are endless and may radically change future attraction openings. It also gives guests a reason to stick around and explore Star Wars: Galaxy’s Edge, something they may not have been willing to do if they waited in an exhausting line and just wanted to leave afterwards.

If you saw The Imagineering Story, you may have picked up that bad press is sort of par for the course for new openings at Disney parks. While Star Wars: Galaxy’s Edge got its fair of positive buzz, a combination of the uniquely polarized Star Wars fan base and critical observers resounded shared skepticism—couldn’t it have just been focused on the beloved original films? Why was Star Wars Land opening with only one attraction? Why so much focus on immersion? Negative press continued through both land openings (with Disneyland getting slammed particularly hard due to low attendance levels), despite high praise across the board for the quality of the Black Spire Outpost itself.

Star Wars: Rise of the Resistance has single-handedly altered the public narrative surrounding Star Wars: Galaxy’s Edge—there is no doubt that this ride is a success, and that means a tangible win for the company. Response to the ride has been generally unanimous: it’s brilliant, a perfect symphony of technology and storytelling. Speaking for myself, I was gripped from beginning to end, and it reminded me of my first ride on the Indiana Jones Adventure in 1995—indeed, I would say Star Wars: Rise of the Resistance is almost a spiritual successor to it, taking the same ultra-realistic adventure concept to new levels with another Lucasfilm property. The closest thing I have seen in modern rides is Harry Potter and the Forbidden Journey, but Star Wars: Rise of the Resistance goes even a step further than that excellent attraction—it manages to seamlessly weave walkthrough, simulator, and trackless ride technology into a coherent story with mass appeal.

Most everyone anticipated that Galaxy’s Edge would draw massive crowds to rival those we saw at the opening of Avatar: The World of Pandora. That land single-handedly boosted Disney’s Animal Kingdom to one of their most popular parks, and Avatar: Flight of Passage still draws 180 minute waits on busy days. Millennium Falcon: Smuggler’s Run is a great attraction, but it fell short of this mark, failing to appeal to guests in the same way. Star Wars: Rise of the Resistance has finally accomplished what Imagineers were hoping to achieve with Star Wars: Galaxy’s Edge, introducing an attraction that not only completes the land but gives guests who were hesitant to visit a very good reason to buy a ticket.

Does Rise of the Resistance "Fix" Galaxy's Edge? NO IT DOESN'T! There is still too much dead space in Galaxy’s Edge, Its still lacking the overall kinetic energy that was promised from the beginning! Roaming aliens, Roaming Droids, a 3rd attraction etc. Galaxy’s Edge still feels incomplete and I sincerely hope that Disney can address these issues sooner rather than later.