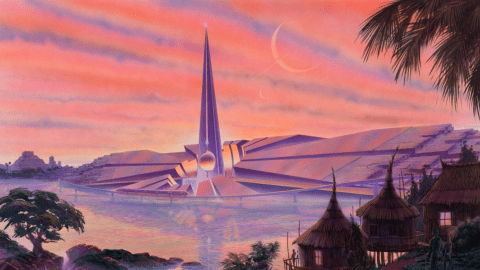 “To all who come to this place of possibility… welcome. Possibilityland is your land...” Or at least, it almost was! Over the years, we’ve taken astounding trips into our  Possibilityland  series to explore the could-be classics that have been dreamed of but never built…

Maybe you’ve ridden along with us through the Enchanted Snow Palace long before Elsa reigned, the wild Western River Expedition that would’ve been Magic Kingdom’s mainstay, or the perilous peaks of never-built Disney “mountains.” Along the way, we’ve visited entirely lost lands like the inventive Discovery Bay, the wacky Muppet Studios, or the “timeless tomorrow” of Tomorrowland 2055. We’ve even explored “alternate reality” versions of Disneyland Park, Magic Kingdom, and Epcot with their unbuilt attractions in-tact!

But today’s trip into Possibilityland may be the most epic yet: the true tale of the ambitious, alternate-reality, never-built Disneyland Resort and its lost theme park, WESTCOT Center. One of the most elaborate and expensive projects ever announced, Westcot was born and died all in the span of a decade, during which time this officially-greenlit project promised to transform Walt’s tiny, original Disneyland into a multi-day destination on par with its younger Floridian sister.

This is the definitive, in-depth exploration into what could’ve been… and why it wasn’t. Settle in for the almost-unbelievable tale of a park that would’ve transformed Disneyland (and Imagineering’s catalogue) forever as we dive deep into Westcot and the Disneyland Resort that almost was...

In the beginning, there was Disneyland. With the last of his savings and having cashed in his life insurance, Walt and a small team purchased about 160 acres of land in the remote and rural orange groves of Anaheim, California. Chosen for its proximity to the under-construction interstate, the park initially took shape on just about 60 acres, nestled up to the I-5 on-ramps. The park and its own blacktop parking lot were snuggly hemmed in by existing streets on all sides. Disney’s property purchase was just enough to hold his dreams.

But his dreams quickly grew… and the land around Disneyland seemed to shrink. That’s because, soon after the park’s groundbreaking, land along those neighboring streets was quickly snatched up, transforming Disneyland’s surroundings from a pastoral haven to a bustling urban area of buzzing motels, restaurants, gas stations, and more, each vying for the attention of sedan-traveling tourists.

As we know, the encroaching threat of reality on his dreamy park frustrated Walt. Determined to more fully control the experience of his guests and keep the real world at bay, Walt took the funds he’d recouped in the decade since Disneyland’s opening and began scouting for more land.

His “Florida Project” was meant to right the wrongs of Disneyland and to bestow “the blessing of size” upon his design team. It was hoped that, in this new “Disney World,” Walt could create something entirely new – his long-imagined E.P.C.O.T., a prototype city powered by corporate innovation – and a built-out, expanded Disneyland East, all on unlimited land.

Unfortunately, Walt Disney passed away in December 1966 – long before any of his “Disney World” actually came to be. But “Disneyland East” – the Magic Kingdom – opened in October 1971. Aside from the Experimental Prototype Community (deemed an impossibility without him), that meant that Walt’s “to-do” list was posthumously completed. And that left Walt Disney Productions unsure of what they should do next.

Which is why when industry historians look back on the 1970s, they think of the decade as Disney’s Dark Ages. A string of misses at the box office more or less meant that Walt Disney Productions hadn’t had a hit since… well… since Walt Disney. More than a decade out from his death in 1966, a number of leaders had tried – and inevitably, failed – to fill Walt’s shoes. Worse still were Disneyland and Magic Kingdom – parks whose investments in the ‘70s more or less amounted to bare steel coasters rather than the grand, spectacular dark rides of Walt’s time.

Then came EPCOT Center. A “Hail Mary” attempt by former leadership at moving the needle at the studio, Walt Disney World’s unprecedented second gate had been a total reinvention: a completely original concept melding the powers of American industry with the showmanship of Disney, crafting a quasi-intellectual World’s Fair of monumental ‘80s architecture. Designed from Disney’s darkest moments (amid talks of hostile takeovers and corporate sell-offs), the promise of EPCOT Center felt like an impending dawn…

Split into two “realms” – the industrious Future World and the international World Showcase - EPCOT Center’s attractions were grouped into “pavilions” showcasing technology, innovation, culture, and corporate power. The park was grand, enormously-scaled, hyper-ambitious… and incredibly expensive. No doubt, the gamble made by then-studio-president Card Walker (who kicked off the project) and Ron Miller (president at its completion) was to redefine Disney and evolve “The Vacation Kingdom of the World” into something new.

It worked… at first. By the year following its 1982 opening, EPCOT Center had helped transform Walt Disney World into the nation’s most-visited recreation resort. But in its first year, the $1.2 billion Disney invested in the gargantuan theme park of exhibits yielded a return of only about 8%... A troubling metric for analysts at the time. In September 1983, the New York Times revisited EPCOT Center a year out from its inauguration as part of a critical look at the state of Disney:

Plagued by costly movie flops and high development costs for its newest extravaganza – the one-year-old Epcot Center at Florida's Walt Disney World – Disney is struggling through its third consecutive year of declining earnings. For the first nine months of the fiscal year, profits fell 5 percent, to $68.7 million. In the most recent quarter, which ended June 30, net income plummeted 35 percent, to $21.4 million, as losses in the movie division and high start-up costs for its new cable operation dragged down earnings.

The 1983 feature ends with a chilling comment by entertainment analyst at Bateman Eichler, Dennis Forst: ''Disney used to be a terrific company. But they haven't made a good move in a long, long time.''

It’s practically impossible to tell the story of any Disney Parks attraction built after 1980 without reintroducing the preeminent figures who made Disney’s expansion in the ‘80s and ‘90s possible: Michael Eisner and Frank Wells. Longtime executives at Paramount Pictures and 20th Century Fox, respectively, the pair were brought in by Walt’s nephew (and member of Disney’s board) Roy E. Disney in 1984. Their mission? To reverse the slow disintegration of Walt Disney Productions.

One major piece of the puzzle: EPCOT Center.

Wells and Eisner inherited the two-year-old park at the height of its now-heralded age: a park still stocked with epic, educational, ambitious dark rides like the Lost Legends: Universe of Energy, Horizons, World of Motion, Journey into Imagination, Kitchen Kabaret, and The Living Seas. And though Imagineering fans worship the park for its spectacular scale and its brazen attempts to educate and entertain all at once, EPCOT Center did have a few mounting problems. Chief among them might’ve been that Eisner seemingly had no idea what to do with it.

The still-fresh CEO had been tasked with improving the park’s attendance, but the subtle, educational, intellectual nature of the park seemed entirely at odds with the modus operandi Eisner had been hired for: to bring excitement, thrills, pop culture, and (gulp) teens into Disney Parks. So while revisiting EPCOT would become a continuous marker of Eisner’s time with Disney, he had another idea of how to redefine Walt Disney World.

It’s sometimes said that Walt Disney World’s primary business isn’t really theme parks at all; it’s hotels and real estate. Eisner saw the potential to use Disney’s massive landholdings in Central Florida to do just that, which is why the ‘80s mark the start of an aggressive and unprecedented expansion of Disney World’s shopping district, entertainment offerings, and hotel room supply – the beginning of the “walled garden” we know today that features no less than two dozen resort hotels… and still growing.

Adding in Magic Kingdom, EPCOT Center, the Disney Village Marketplace, and a growing list of dinner shows, recreational activities, and a water park and it stood to reason that a trip to Disney World could expand to infinite length-of-stays.

Like so many of Eisner’s bold and audacious moves early in his tenure, the reinvention of Walt Disney World worked. And as we know, Eisner’s cinematic, pop-focused, “Ride the Movies” mantra would end up yielding a third theme park, 1989’s Disney-MGM Studios.

And just there, at the dawn of the 1990s, Eisner saw a similar opportunity, back across the country in California… What would it take to turn the tiny Disneyland into a multi-day, multi-park resort like its younger sister? You might be surprised…

Great article. Thanks for putting it together.

Fantastic article, with a lot of information. Articles like this are the reason I come to this website. Enjoyed the history and the information provided.

Thank you for saying this! What a great thing to hear. Stick around for more!

This is a really well-researched and interesting article.

--TW
One of the faceless, nameless production cast members who has worked in and around Disneyland for years...